by Michel Butor
Simon and Schuster, $6.00

The anti-novel novelists (anti-writing writers, really) continue to be the smartest mannequins in the showrooms of Parisian haute-culture; and, to judge from the latest and cutest displays of Robbe-Grillet et cie, it would seem we must prepare for an even vaguer nouvelle vague: for example, one of the tribe, M. Marc Saporti, is currently offering an object said to be a novel which consists of several dozen unbound pages contained inside a portfolio: the pages are unnumbered, numbers being superfluous, for these pages are not intended (necessarily) to be read in sequence, or even top to bottom, or even, heaven help us, left to right. One may shift and shuffle and make of it what one will: a sort of do-it-yourself literary-kit. But Saporti, like our own William Burroughs, takes himself with utmost seriousness; and, again like Mr. Burroughs, is so taken by a sizable section of the more solemn book reviewers. And Saporti is by no means an extreme example of this fashionable school. There are other extravagant practitioners, among them Michel Butor, the author of such highly respected anti-novels as Passing Time and A Change of Heart.

Last year M. Butor tried something new: journalism: a “travel book.” He called it Mobile (in honor of Calder? or the Alabama seaport?); Gallimard published it most luxuriously, and the French press, while not wildly enthusiastic, just the same paid it a lot of unjoking attention. Now, in a translation by Richard Howard, the book has been issued in this country. The importers are Simon & Schuster, and the price is $6, a sum certain to result in hard feelings on the part of many customers, at least those who understood (or misunderstood) that they were buying a usable, that is to say readable, article.

Mobile is not readable. At any rate I haven’t been able to get through it, though it was supposedly my duty to do so (but wasn’t it Agee who always insisted a critic need not read a book in order to criticize it?). Anyway, of Butor’s 328 pages, I “read” almost 200, then skimmed to the end. The author’s announced subject is the United States: impressions assimilated during a state-by-state, virtually country-by-country, American journey. Collage is the technique involved: enigmatic diary jottings, pop-song lyrics, dreary snippets of almanae-information, bits of unfinished poetry, and long, long laundry-like lists of American merchandise, the whole of it set forth in an unwitty, unoriginally eccentric typography. Open the book anywhere. I have: and here are pages 108-109:

The illuminated face of Cary Grant.

RICHMOND.—When it is eight o’clock in

Night over the water.

The parks at night.

The meadows at night.

The bars at night.

The noise of the water at night.

Or perhaps, though the selection was made quite at random, perhaps you think I chose unfairly? Very well. Let’s try again. Let’s drop the book on the floor and see where it opens. Page 286—

but you won’t, they would make such a juss,
that you came out alone with me, so far away along the beach.

Be sociable! Have a Pepsi!—Or a record by Johnny Cash, “the fabulous Johnny Cash”: “Don’t take your guns to town,” “plus many other successes in Johnny’s inimitable style.”

Two splendid Audubon’s caracaras fighting, one clinging to a branch, the other in the air, their open beaks thrusting at each other.

The sea, your tears are salty like the sea,
don’t be afraid, nothing will happen to you,
I’m going to give you a little of my blackness, a little sand will be left in your hair.
For Texas is so big, but Mexico…

If you think all dehydrated soups taste the same, it’s time you tried Heinz!—or a Johnny Mathis record, “A campfire and two guitars,” “mood music as only Johnny Mathis can sing it.”

As to the author’s purpose—that, I suppose, is anyone’s guess. The book, subtitled “Study for a Representation of the United States,” is dedicated: “To the memory of Jackson Pollock.” Have we here a clue?—does Butor intend Mobile as an experiment in Action Scribbling? an attempt at Drip-method Prose? However, as ought to be obvious to even so relentlessly sophisticated an intelligence as Butor’s, writing, unlike painting or music, can never be an abstract art: words have to mean something; and yet this gentleman has managed to compose a fair-sized volume that conveys (to me) absolutely nothing. I have no idea what he thought of the United States. But of course one must remember that Mobile is merely a “Study for a Representation”; perhaps the “Representation” itself will be a less private affair. 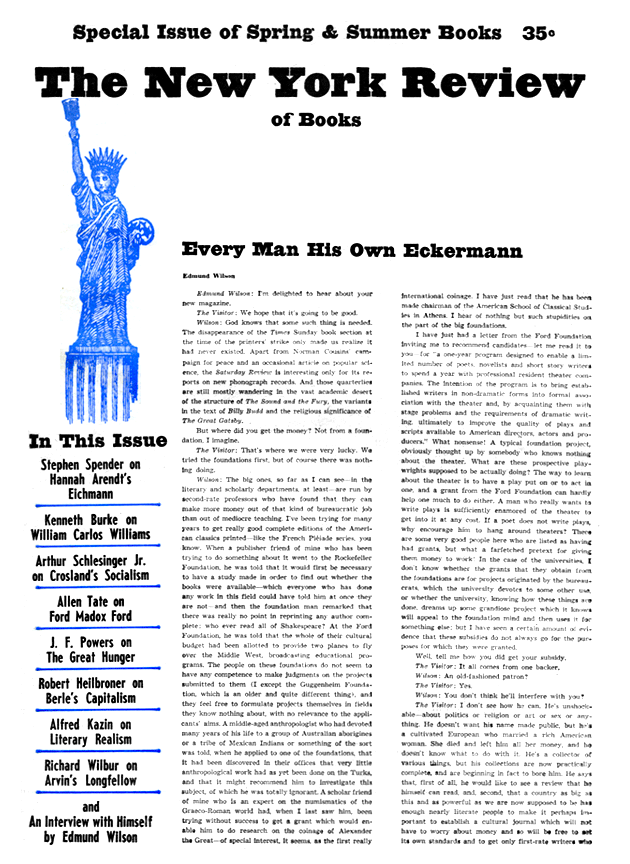