The Journey and the Pity

What is a novelist to do who not only loathes his society but also intends his novel to make you loathe that society too? Realism will not be adequate to his purpose, even if he is, like Flaubert, a giant of perversity able to sustain his loathing through years of loving attention to the minutiae of his characters’ lives. For finally realism contains an irreducible residue of conservatism: by his very devotion in portraying it, the realistic novelist is saying that society is worth something, if only his and our attention. A really radical rejection must turn to fantasy to prove itself. In a satire or allegory or even a science-fiction futuristic story, the author may be saying, among other things, that he loathes the suggested society so much he can look at it only through the distorting glass of fantasy. He will be free to disregard all those inconvenient attractions along the way which occur in even the worst actual society—fidelity to friends, for example, or doing a job well—and which must be included if a realistic portrait is to be credible. This, I think, goes a long way to account for the prevalence of the type of fiction to which the two novels here under consideration belong, the accusing fantasy. It takes no pathological excess of moral bile to loathe one of the great twentieth-century nations at its very roots.

The two stories have closely allied themes. The Journey and the Pity concerns the way an anonymous and irresistible central government meddles in the lives of a few people in a sort of pioneer outstation (neither the town nor the country has a name). The state’s refusal to take responsibility for its meddling is embodied in the nameless “representative” who is the agent of its will. The final purpose of the state is revealed in the official, unsigned letter with which the book ends. In this letter the narrator, who has just received a promotion, learns that he has been relieved of his duties. “Being of no further use, you are now alone. No guidance as to what you ought to do or what sources of sustenance are still open to you will ever be given.”

Seconds concerns a successful banker in his forties who voluntarily submits to the ministrations of a highly efficient, typical modern American corporation, about which he knows only that when it is through with processing him he will be reborn. He is provided with a legal death; he is given a new name, face, residence, and the occupation he had half-daydreamed of engaging in; he is given freedom from his old self, a new identity, a second chance. The overt purpose of the firm is to make its reborn clients happy, but its actual accomplishment is to ruin them. A few are satisfied with the happiness procured by the corporation, which turns out to be a sort of Palm Springs vacuity; but most fail either to become someone new or to settle for Palm Springs. At the end of the story the central character (whom we know only by his name as a reborn) begs the president of the corporation to have him killed; when this request is refused, on the ground that he must wait till the company can make his death useful to someone else who wants to be reborn, the protagonist says, “It really doesn’t matter.” He wishes for nothing; he has nothing left to do but to work jigsaw puzzles till “they” come to take him off to plastic surgery and rekill him.

Both these stories have important themes, and both authors are intelligent and morally serious. The message of their stories, which is also the lesson of Hannah Arendt’s book on Eichmann, should be heeded: “If you assent to a totalitarian corporate institution, it will destroy your soul.” But Mayewskl and Ely are not just moralists. They are also storytellers working in a difficult form, the quasi-allegorical satire. A fairly pure satire (Gulliver’s Travels) need not be allegorical, just as a fairly pure allegory (Pilgrim’s Progress) need not be in any sense a satire, but the two modes can be mixed in various proportions and with fine results. Three modern social satirists who have used the mixed mode more or less successfully are Huxley, Koestler, and Orwell: Kafka is the master.

The prime literary requirements of the form are inventiveness, vividness, and narrative drive. Unfortunately, The Journey and the Pity is deficient in all three respects. The story is pervaded by the same vagueness and illogic that afflict the title (journey and pity are trochaic nouns which have a weak assonance in common but no overlap of meaning, the emotion of pity is quite inconspicuous in the story, and none of the characters takes a journey). The style in which it is written is complicated and lovely, when it should be plain and harsh. Often it is unclear what has just happened or is presently happening; and, except in some abstract, intellectual, anti-narrative way, one seldom knows why people do or say what they do. If you liked Last Year at Marienbad you have a chance of liking this story. Instead of the film’s vividness of detail, the story offers moral seriousness, but on the whole they produce much the same effect: the enervation of inconsequence.

Seconds is vivid from scene to scene, and the narrative not only is clever but also embodies the message very well: the story is exciting reading. Moreover, its criticism of the American way is mordant and just. It has the ingredients of a first-rate satire, but fails to use them to full advantage. The first of the book’s two important flaws is technical. This does not keep the reader at a cool distance from the main character, but invites the sort of sympathy and closeness proper to realistic fiction. The result is that the reader feels an easy pity for the victim rather than profound horror at the organization. The ending exemplifies this fault. When the author could have attained an absolute irony worthy of Swift, he instead dilutes and sweetens the moment with pity; one by one, all symbols bonging, the lights go out for the poor dear protagonist. The writer who was able to reach the pitch of that last scene’s cold horror had no business gumming up his cruel satire with warm pity. Satire wears a comic mask carved of ice. The second important flaw in the story is that the author does not take his theme seriously enough. He hit on a splendid idea and he is inventive and skillful, but he settles for too little. The book is thin. For example, the rebirth idea provides superb opportunity for religious satire—not in event only but also in ironic speculation—but all that Ely does with this opportunity is to create a three-in-one corporation priest/minister/rabbi who complains of his lack of status in the organization. A mere scratch when savage disemboweling was called for. Several times, Ely verges on deeper, stronger, universal satire, and then draws back and settles for something safer—for a thriller kind of excitation or for an excoriation of what is, after all, local to this age and nation. He is on the right track. Maybe some time he will go all the way.

Last spring there was published in unreviewable modesty a paperback sciencefiction thriller, The Man Who Fell to Earth by Walter Tevis (Gold Medal Books). It is like these two more pretentious book in general mode, but, unlike the other two novelists, Tevis took as his primary job telling the story well. It is a hit-and-miss allegory with patches of satire here and there, but it is a coherent and vigorous fantasy. It contains no large important paraphrasable message, but it makes a few comments along the way which have power to cling to the memory longer than the grand message of the poorer stories. This provokes a question (not one of those questions which imply their own answer, but a real question): Can even a fantastic story support, as its dominant theme and purpose, its author’s loathing of his own society? My hunch is Not Likely, if only for the practical reason that the author’s rage will make him too impatient and his disgust will make him too slovenly to tend to his story with the craftsmanship good storytelling requires. Perhaps only a Swift—perhaps not even a Swift—could imagine a story which would be adequate to contain his rage at, and also to figure forth, one of this century’s great new societies that no one has yet been able to imagine well. 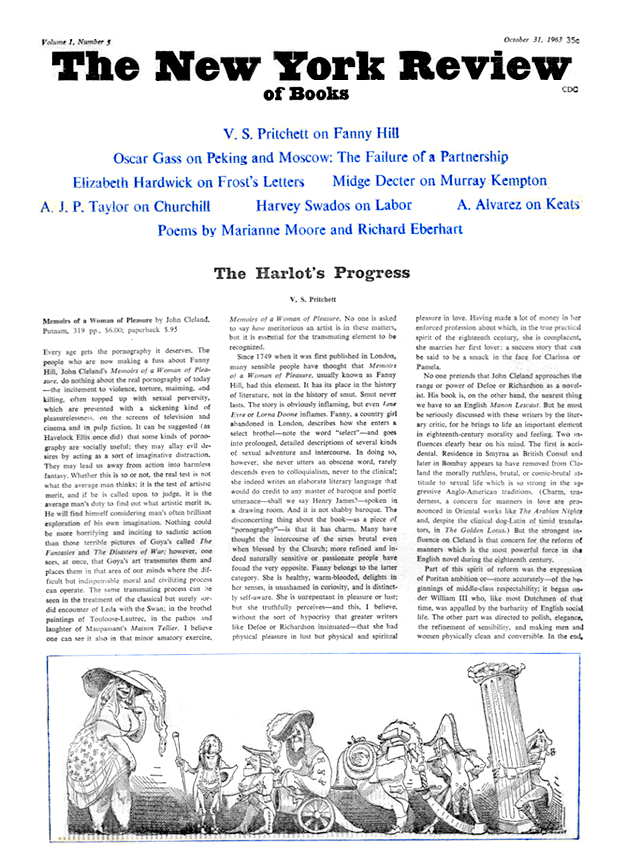