Toscanini—not only for opera and orchestra management’s, or record and broadcasting companies, but even for people in personal relations—was someone to exploit in one way or another; and my guess is that regarding this as inevitable, he exploited his exploiters and accepted the exchange of benefits without complaint. But there were occasions when he didn’t get what was owed him—from people whom he trusted and who betrayed him; or from the record or broadcasting company which, in a sense, also failed him by issuing on records or transmitting over the air defective reproductions of his performances, or by moving his broadcasts from Sunday at 5, when everyone would listen to Saturday at 6:30, when many could not. And another exploitation from which he usually got no benefit in return was that of the journalist. I mean not a piece of writing like Spike Hughes’s book, The Toscanini Legacy, in which a musician with perception wrote of what he had heard in the concert hall and on records, and from which Toscanini gained the illumination of his work for those who read the book. I mean what was written not to illuminate his work but to impress the reader with the writers’ knowledge, understanding and perception—which they didn’t have. At the time when the way to show knowledge, understanding, and perception was to admire Toscanini, these journalists were extravagant in their admiration; when the way to show it was to criticize him, they were extreme in their fault-finding; and the faul-finding had as little to do with the realities of the Toscanini operation and its results as the admiration.

Another way to impress the reader was to discriminate between Toscanini’s strengths and weaknesses, his great achievements and failures—all very plausible in the writer’s words, but existing only in those words. The egregious example of this pseudo-discrimination was the book of Robert C. Marsh with the grandiose title Toscanini and the Art of Orchestral Performance. But not to be forgotten is an earlier example: Irving Kolodin’s lead article, The Meaning of Toscanini, in a Saturday Review greeting to Toscanini on his eighty-third birthday, an occasion for Kolodin to go “Phlumph-phlumph-phlumph” (“It is a comforting fallacy of criticism…that time presents a pattern of progress, by the mere fact of example”) and to demonstrate the discriminating perception that enabled him to cite “a stiff ‘Magic Flute Overture”‘ as against “a superbly flexible ‘Freischütz,’ ” “an overwrought ‘Leonore No. 3’ ” as against “a wonderful proclamative ‘Meistersinger.’ ” Unexpectedly, however, the greeting also included truth in the form of an article, Playing With the Maestro, by a member of the NBC Symphony, Samuel Antek; and this accurately informative article Antek elaborated into the text that is published now in This Was Toscanini.

I have gone into these preliminaries so that the importance of this book may be realized. When an NBC Symphony musician remarked to me that the books about Toscanini had been written by outsiders, and there was need of a book by insiders—the men who had themselves worked with Toscanini—he didn’t mean that the outsiders had produced nothing but the rubbish I have mentioned; but he did mean that even outsiders like Hughes who reported accurately what they had heard in performances or observed at working rehearsals could not report the experience of sitting in an orchestra and rehearsing or performing under Toscanini. And the Antek text is the first written by such an insider, telling us things only an insider can tell, which in addition the marvelous photographs Robert Hupka took of Toscanini in action at rehearsals make vividly real for us, the extraordinary powers with which Toscanini operated; the complete, selfless, and intense dedication to the artistic task he made into a moral quest for truth (see the photographs on pages 79-81, ending with the one in which he points heavenward as he exclaims over the truth he has found in the score he has been examining), which, for the men in his orchestra, set him apart from all other conductors (the only one whom some of the men speak of in similar fashion is Cantelli, at whose rehearsals, they recall, Toscanini sat smiling his delight at what he heard); and the wonderful personal qualities that made Toscanini someone his musicians loved (though one of the outsiders, Alan Rich of the New York Herald Tribune, knows better; in his obituary of Reiner he said that the Chicago Symphony didn’t find him lovable—“any more than Toscanini’s men found him lovable”).

Antek was one of the large number of outstanding young string-players—solo performers and members of quartets—who were engaged in 1937 as replacements of members of the NBC staff orchestra to be part of the group within that staff orchestra that was the NBC Symphony. They were brilliantly talented; they had not only the energy of youth but its capacity for warm response to the stimulus of greatness; they had had a couple of months’ preliminary drilling by Rodzinski and Monteux, but not the years of working in orchestras under such conductors that would have killed their responsiveness and left them bored and indifferent; and so they were exactly right for the situation in which they found themselves—working with a conductor of unique powers and personal dedication and magnetism. They responded by exceeding what they knew to be their highest capacities (“I don’t play that good,” was the memorable comment of one solo wind who heard himself in a recorded performance); and this gave each of them the same feeling of personal artistic fulfillment as he would have go from performing alone.

When you played with him, you felt you were once more an individual, an artist, not a nonentity. This made you bring to everything you did, every note you played, the same intensity and expressiveness you sought when playing alone. You were once more stimulated, challenged to give your best…We played to please the Old Man, but…we were inspired to play and satisfy our own highest standards and instincts, in pursuit of our common goal. The terrors and abuses Toscanini hurled at us were accepted and tolerated because they sprang from his own humility, sincerity, and love for the music…We were completely won over and carried along with Toscanini’s musical approach, its unerring, never exaggerated good taste. The performance was ours, not only Toscanini’s, for he was but the voice of our own musical consciences. Few musicians ever gave such complete, unswerving dedication to high ideals, and few imbued music-making with such deep emotion, stature, and nobility. We were playing with Toscanini! We were musicians!

The result was the performances which audiences found so extraordinary and moving. And concerning these Antek reveals two facts. In the first place, though the performances that were heard by the audience—the outsiders—were undoubtedly extraordinary, the greatest performances were the ones heard only by the insiders—the musicians of the orchestra—at the working rehearsals (as distinguished from the dress rehearsals attended by invited audiences the last year or two). For at these rehearsals he was relaxed and uninhibited. his gestures were “more florid, more free, more expressive and dramatic,” and he could “shout, bellow, and sing”; whereas “at concerts he seemed to freeze; his movements were smaller, less emotional, more restrained,” and “sensing his tension, the men themselves became tense and nervous and often could not give their utmost.” But in the second place, whereas the result—the performance—was what mattered for the audience, his greatness for the players was what they felt in him—“the unimpeachable honesty and integrity, the warm humanity…in his working process,” and the “tremendous power and incandescence he inspired” in them. “It was this spiritual, unseen, but deeply felt relationship that truly expressed and meant ‘Toscanini’ to us,” and “set apart the experience of playing with Toscanini from that of playing with any other conductor, no matter how great he might be.”

It was, one might add, a relation with the one group Toscanini could feel sure would not betray him. Text and photographs support Toscanini’s own statement once: “Conducting is great suffering for me.” But his work with his orchestra was a relation with one group of human beings in whom he could feel complete confidence that they wanted nothing from him beyond what it meant most to him in life to give and was happiest in giving, and who—as some of the photographs testify—gave him moments of the greatest happiness he experienced in his life. 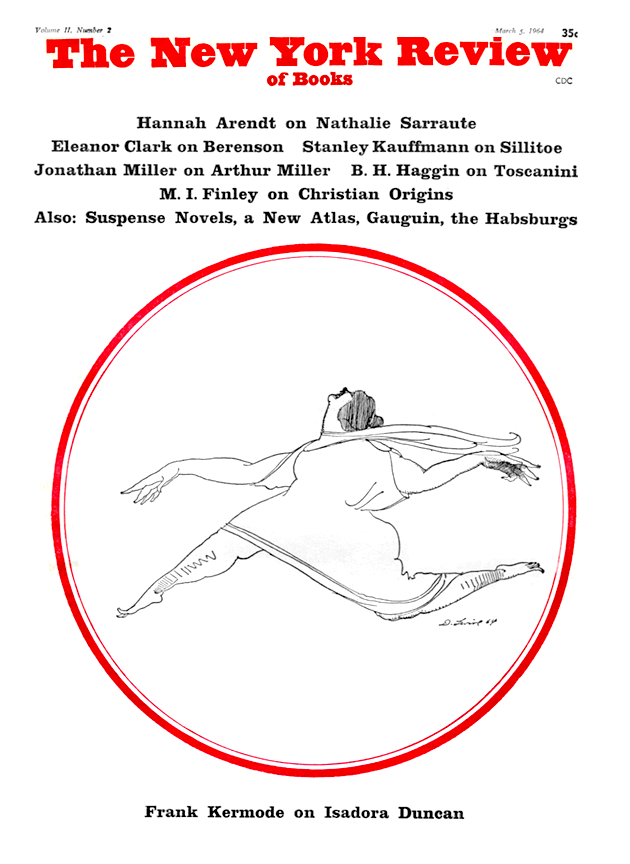 Mozart and the Scholars

Mozart and the Scholars

Notes from a Plague Year