When I left an English public school, I wanted to like every person I met and find the good in every place which harbored me. Exclusiveness seemed to have been the trouble. My first private boarding-school, where I went at the age of eight, was actually separated from the village school by a towering wall with a chicken-wire battlement; over it came only blind-launched missiles of the country limestone and impotent cries of hate in an accent we could not understand. On the eve of the 1945 general election, one of our masters told a group of us that a Socialist victory would immediately bring workmen round to knock the wall down, and submerge us beneath the strange children with stone weapons who would come screaming through the breach. At first I believed this. Later, at a public school proper, that wall of exclusion came to seem the decisive enemy; in reading, I escaped to the primitive equalities of barbarian Europe, and dreaded the long lessons on the Glorious Revolution, or the eighteenth century, in which every decade seemed to lay another course of stones between classes of men.

Liking everybody, organizing a conspiracy to like and know where one was encouraged to withdraw and avoid, seemed to be a genuine way of revolt. Gradually, doubts crept in. There was a corporal from Glasgow who listened to a colleague boasting about his women and said with contempt: “He’s like Jeesuz, he loves evrabody!” Then there were friends who had escaped public school education, and whose mental energies went into the rebellion against tolerance and into the building of new ramparts of exclusiveness to protect what they did find tolerable. Incredulously, one was brought to realize that uncritical tolerance was itself a public-school reaction, an invisible wall lying beyond the palpable wall of custom whose very function seemed to be to keep rebellion against the system within harmless limits.

Mr. Wilkinson is not interested in the private school system and its relation to political power is both a sharp analysis of the schools themselves since the Arnold reforms in the middle of the last century, and a less sharp attempt at a comparative study. As a survivor himself, he knows how hard it is to escape the deceptively mild and vague views of the world which are put forward there. “A political system which maintains order by ethical restraints rather than by law has certain tendencies…to become totalitarian.” He knows too, I think, the inclination of resentful victims to mutter on eternally about the topic, as if the public schools cast their Perpendicular shadow across the entire nation. This exaggerating is the rattle of the slave’s chain. The public school myth thrives upon it, and perhaps the main value of Mr. Wilkinson’s comparisons to Japanese, Jesuit, and Confucian methods of educating a governing elite is that they deliberately punch a hole in the precious notion that the British apparatus is “unique.”

Mr. Wilkinson is not interested in the medieval foundations of the original public schools. So few of them, after all, are “original,” and he concentrates upon the mid-nineteenth century spread of boarding schools that followed upon Dr. Arnold’s headmastership at Rugby. In this context, and in many ways still, the public schools “served as an instrument of class power”—originally, the power of the landed class. The figures are always impressive: between 1931 and 1936. Etonians formed 27 per cent of the Foreign Office intake; in 1928, 152 out of 225 senior civil servants came from public schools; the concentration of public schoolboys, especially Etonians, in Mr. Macmillan’s late cabinets upset even the Conservative Party.

The social achievement of the reformed and new public schools was to “perpetuate the political supremacy of the landed classes by ‘capturing’ talent from the rising bourgeoise and moulding that talent into ‘synthetic’ gentlemen.” These synthetic young gentlemen went to satisfy “the recruiting needs of a new, expanding bureaucracy [which] demanded middle class participation in government.” There are too many collective nouns with wills of their own in all this, but the process is clear enough. Mr. Wilkinson points out that the boarding-school system, forcing one environment and culture upon boys from all over the country, helped to cut off middle-class pupils from their local roots and graft them into the single ruling group with common attitudes and a common accent. To this day, an upper-class Englishman is thrown into comic embarrassment if you simply ask him: “Where do you come from?” One does not come from anywhere geographical, one comes from Eton or Wellington or Heaven or somewhere like that. Such is the reaction, at least, developed by Mr. Wilkinson’s synthetic gents. A hereditary aristocrat, retaining land, would be more likely to find the question natural.

One curious verbal result of this process, which Mr. Wilkinson does not mention, is the usage “upper class” itself. This is a term little used by the aristocracy, much favored by the professional middle-class with public-school education. It claims, of course, that the Queen in her palace, the lung-specialist in private practice in Harley Street, the merchant banker in the City, the senior civil servant, the judge and the retired Captain of Gunners in the boarding-house are all limbs of one body.

Such illogicalities back up the Wilkinson view of the public schools as a device for absorbing the middle classes before their power threatened the whole constitutional structure of Britain. But the medieval foundations had the purpose of training up poor boys to become the learned and loyal instruments of the Crown—to form the private army of the Monarchy in its struggle against both landowner and merchant. Already in eclipse by the Tudor period, this feeling has never quite disappeared; it rose again when the Victorian call to duty and selflessness rang through the schools, and helps now to produce a small but alarming minority of men to whom the work of State is all and each social class an enemy.

Three attributes must a gentleman have, according to Mr. Wilkinson. Magic is the most important, meaning the etiquette which not only made the public school man strange and impressive but also persuaded him that it would be “the done thing” to take command. Then comes leisure, the boast that service is given out of charity, not from need. The author adds, however, that “in order to become an MP, a lawyer or landlord did not have to feel he should sacrifice his non-political activities”; there was no fear of impoverishment. Thirdly, there is the gentleman’s attitude towards privilege and duty, the first—with a rich bonus of moral superiority—earned by the second. With all these qualities, the synthetic gentleman also moved away in distaste from the knobby individualism of those who had conquered commerce and industry in the first half of the century, and became self-consciously collective in his behavior. A boy who walks alone to chapel at Winchester is stated with disapproval to be “sporting a loather.” The Conservative Party developed its immoral religion of loyalty.

Astutely, Mr. Wilkinson points out that the burden of all this moral splendor and unselfishness has led to the most comic of all British failings: the display of style without achievement. One thinks of all those stylish retreats, of those manful British boxers who double about the ring behind a flawlessly straight left and then, after a round or so, are suddenly knocked into the middle of next week. One thinks with gloom about British diplomats, with relish about some British actors.

But the most interesting question raised in this book—and not answered—is why the process of absorption stopped with the middle classes. Why should it not have continued, until the public schools and their apparently invincible ethic stole the best from the children of the working class as well? Mr. Wilkinson argues convincingly that the truly “undemocratic” period of the public schools began in 1918, the moment at which they ceased to extend their privileges. Up to the first World War, it could be said that the public schools were widening the whole social basis of privilege and power. Now, and ever more blatantly, they rail of access to those privileges.

This cannot go on for long. With or without a Labour victory at the next elections, something will have to be done about unblocking the entrance to these schools; the insistence on classics as a qualification for entrance is as disingenuous and ill-famed as the “examination” set to a Mississippi Negro who wants to vote. In a raging New Statesman article titled “To Hell with Public Schools,” John Morgan writes: “I have friends who have to be given something to bite on when confronted, as one is almost daily, with news that some clown has been appointed to a job in business, journalism or politics by virtue of his belonging to the public school class. This almost hydrophobic response is not envy.”

There are two possibilities. One is to outflank the system by improving State education, but here arises the danger of creating a rich, privileged class who are also disaffiliated from the government and planning of their own country, a Watusi in the Home Counties. The other is to wreck the system deliberately, by wrenching open the entrance qualifications and fee scales or by total, furrow-salting abolition. Some totalitarian school systems (as Mr. Wilkinson puts it) can also foster imagination—he quotes the Jesuits—but the British public schools are not one of them. They have become a privilege without a duty to justify them. They are “sporting a loather” of the national interest they claim to serve. 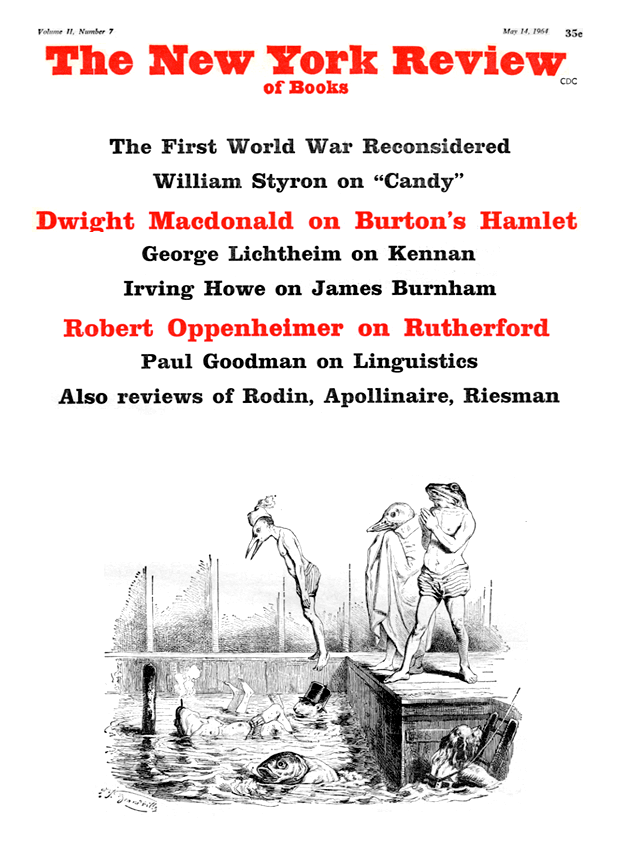 Neal Ascherson is the author of Black Sea, Stone Voices: The Search for Scotland, and the novel Death of the Fronsac. He is an Honorary Professor at the Institute of Archaeology, University College London. (July 2021)

The High Cost of Victory