The Death of Artemio Cruz

Both Carlos Fuentes and Joseph Breitbach are concerned with the realities of power. At that point their similarities cease. One is ornate and romantic, the other purse-lipped and, only by contrast, classical. One is modern, in a faintly slick, eye-catching way, the other old-fashioned and flat as milk. One treats politics as a language of feeling, the other as a calculus of manipulation. Neither has a very high opinion of his subject. For both, political life is a process of dehumanization, a compensation for inner failure, warping, and splitting.

Fuentes’s hero-villain, Artemio Cruz—Mexican industrialist, newspaper and land-owner, millionaire—lies on his death-bed while his devoted secretary, his despised and despising wife and daughter jostle around him. A priest is trying to force on him the comforts of the last sacrament, the doctors probe and peer at his body. And he lies there in a trance of disgust: disgust with those around him, with his past and, above all, with his own physical presence. Idealism, ambition, passion, and achievement all end in one corruption, the smell of which horrifies him. He reeks in his own nostrils.

Literally so, for by an odd trick of style all Fuentes’s most vivid perceptions come in as scents on the air. He is a writer with a nose and no eye. Whenever he piles up visual details, listing the goodies in Cruz’s mansions, his grandiose arrays of clothes and mistresses, the writing goes dead; he sounds less like an artist than a compiler of baroque inventories. Only smells seem really to get through to him imaginatively: the smell of his skin, his breath, his faeces, the smell of girls and food, “the scents of the mountain and the plain: arrayan and papaya, the smells of darkness and tabachin, pine and tulipan laurel, vanilla and tecotehue, cimarron violet, mimosa, tiger flowers.” Like a hunting dog, he sees through his nose. And this has a curious effect: it makes the book, for all its scope, intensely private.

This claustrophobia of the self is emphasized by the form. Cruz’s story is told in three persons. “I” is the old man dying on his bed; “you” is a slightly vatic, “experimental” projection of his potentialities into an unspecified future (you know it is experimental because the letters are in lower-case and the punctuation scanty); “he” is the real hero, the man whose history emerges bit by bit from incidents shuffled around from his seventy-one years.

The story, when you pick it out, is straightforward enough, and handily symbolic. Like Mexico itself, Cruz is the bastard son of a decayed landowner and a peon. The Revolution makes him into an idealistic minor hero but, in the process, the girl he loves is murdered by the other side. So the heart dies and the will to power is born. He returns from the wars, marries the frigid daughter of an aristocrat, lends out money at extortionate rates, amasses land, and climbs remorselessly into the world of very big business by bribery, blackmail, violence, and strike-breaking. His career, I suppose, is representative of all radical movements in a country as poor and open to corruption as Mexico, where a few hundred dollars of spot cash, ruthlessly used, could be the key to millions. The chance of power corrupts more absolutely than power itself.

Since Fuentes is a sophisticated writer—at times an over-sophisticated overwriter—the gradual hardening and corruption of his hero is done with a good deal of subtlety and intelligence. He is never allowed to become a monster since the process he represents, though monstrous enough, is also natural:

A revolution is shaped on battlefields, but once it is corrupted, though battles are still won, the revolution is lost. We have all been responsible. We have allowed ourselves to be divided and controlled by the ruthless, the ambitious, and the mediocre. Those who wanted a true revolution, radical and uncompromising, are unfortunately ignorant and bloody men. And the literate elements want only a half-revolution, compatible with what interests them, their only interest, getting on in the world, living well, replacing Don Porfirio’s elite. There you have Mexico’s drama.

So speaks Cruz’s future brother-in-law, who is promptly shot. I imagine he speaks fairly for the author’s own conflicts. Fuentes, apparently, is a Marxist yet he is also literate and humane, unwilling to trust the bullies who take over revolutions; hence Cruz remains sympathetic and accepted, despite all his corruption. More important, Fuentes the Marxist is also deeply romantic. In fact, his romanticism is Marxist, and vice versa. For all his worldliness, he yearns for the pure revolution, the pure choice between right and wrong, justice and exploitation. The compromises of political reality seem insufferable.

C’est magnifique, no doubt, but it’s not the class war. Yet I suspect that Fuentes is typical of many Latin-American intellectuals, for whom Revolution seems to be an expression of romantic passion. Marxism is to them what the pundonor was to Lope de Vega, a stunning but rather imprecise ideal. Certainly, in The Death of Artemio Cruz there is no distinction between the hero’s early revolutionary fervor and his grand passion for the girl Regina, no way of knowing if his subsequent exploitation of both women and workers is more a betrayal of her memory than of his political convictions. So in all his hard, successful chicanery he never loses that trace of a sob in his throat for both his nastiness and his vanished innocence:

Bliss was it in that dawn to be alive,
But to be young was very heaven!

Revolution and youth, political passion and love, are interchangeable and indistinguishable. Maturity, apparently, means the end of ideology.

In comparison, Joseph Breitbach seems as ancient and as cold as the hills. Report on Bruno is written in the style of a diplomatic dispatch, stiff, formal, deadening; it runs continually to oratio obtiqua and interjected hindsights in the “if-only -I-had-known-then” manner. Granted, all this is dramatically apt, for the narrator is an aging tycoon, Minister of the Interior, and leader of the Liberal Party of one of those little commercial democracies with a badly behaved royal family, somewhere between France and Germany. (Guess which.) Still, I couldn’t help wishing that Breitbach had been a little less single-minded in his creation of this cunning old bore. As it is, he allows his narrator’s chill sensibility to control every detail of the novel, stripping it not merely of ornaments but of imaginative depth. Nothing is visualized, nothing is placed, the talk never comes alive and the characters are shadows with titles—as who should say, “I can remember the name, but I can’t think of the face.” Report on Bruno is a kind of political detective story: only the plot matters.

The themes are two: the intricacies of manipulative power politics, and the creation of a demogogue, Bruno. Unlike Artemio Cruz, Bruno is wrong from the start, clever but emotionally crippled and utterly narcissistic. He is kept away from his divorced parents—mother is a junkie and father an alchoholic Communist—and brought up by a homosexual tutor with political ambitions and that icy eminence, his absentee grandfather. Gradually, the boy’s tantrums harden into ruthlessness. He joins up with his father, turns Communist and goes to Moscow; when he returns, he rejects both the party and papa, who is then murdered by the Russians; in league with a journalist, he brings down his grandfather’s government. The book ends with Bruno, still in his twenties, poised for dictatorship.

The novel is a network of power plays: spying, counter-spying, blackmail, and coercion. But all this is less intriguing than the development of the narrator himself. In comparison, Bruno is tiresome and, in his devious way, conventional. It is the old man who changes most insidiously. At first he seems, within his frosty limits, to be a fairly well-meaning liberal leader of a rich, corcupt, but equally well-meaning liberal democracy. By the end, his paternalism has emerged more or less as totalitarianism; he controls his comfortable little democracy through a honeycomb of secret police, vice squads, security forces, and spies. Microphones are hidden everywhere, all telephones are tapped, and such information as cannot be bought from spies is extracted by torture—all, of course, with the best anti-Communist motives. The monster Bruno was, in short, begotten by another monster; they differ only in style.

It is odd, then, that Breitbach’s blurb-writer should suggest that the grandfather stands for maturity, liberalism, and morality, and that the book somehow reflects “the conflict between the political philosophies of the East and the West.” The only conflict I could find was between different forms of cynicism, manipulation, and inquisitorial power. If one is supposed to be good and the other evil, then Report on Bruno is a more anti-Western document than anything a romantic Marxist like Fuentes ever dreamed up. But Breitbach isn’t letting on; his style is as icily denatured as his theme. It left me, as it left him, cold. 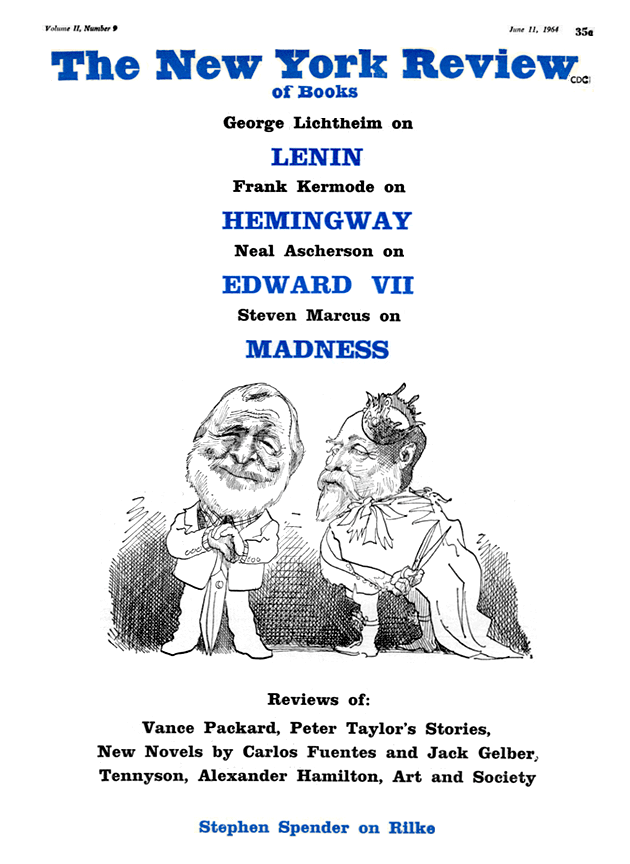 Getting High on the Himalayas

The Trouble with Happiness

Getting High on the Himalayas

The Trouble with Happiness

Al Alvarez is the author of Risky Business, a selection of essays, many of which first appeared in The New York Review of Books.