View from the Seventh Floor

Foreign and Other Affairs

From the seventh floor of the Department of State where the author of View from the Seventh Floor has his office as Counselor and Chairman of the Policy Planning Council, the international landscape looks pleasant enough. True, old problems remain to be solved, and new ones are to be expected. But compared to what it looked like a few years ago, there is improvement all around. Better still, the landscape has been transformed dramatically in recent years, dotted as it is with “crucial burning-points,” in accord with the desires, if not the plans, of those who dwell on the seventh floor of the Department of State.

It is more than a coincidence that things started to change for the better in January 1961 when the Administration of which Mr. Rostow is a prominent member took office. It is not only that Mr. Rostow is pleased by the view from the seventh floor, but he is also pleased with himself. Looking at a world so greatly improved, he cannot but feel satisfied with his own contribution to these improvements. Admittedly, this is not yet the seventh day on which we can rest content with what we have done during the week.

“Three years out,” Mr. Rostow writes, “our feeling is that we are in mid-passage. Both abroad and at home we have made much more progress than is, perhaps, generally realized; but there is distance to travel before the great objectives defined by Presidents Kennedy and Johnson, to which we remain committed and toward which we have moved, can be set down in the records of history as substantially accomplished.” Thus we are about at the end of the third day of Creation. We are satisfied with what we have done, and we look forward with confidence to what still remains to be done.

It is impossible to apply to this book the ordinary standards of scholarly criticism. This collection of speeches, supplemented by a magazine article, aims, according to the preface, at “explaining the government’s foreign policy to the public” and at “trying to make clear the relation of the parts to the whole.” In truth, it does nothing of the kind. Instead, with the exception of the few chapters on economic matters, which are brilliant and instructive, it tries to make a case for the foreign policy of the Kennedy and Johnson Administrations in so bland, smug, and one-sided a manner as to suggest a campaign document rather than objective analysis.

The momentous problems which in their intractability impose tragic choices upon the country are reduced to mere stumbling blocks on the path to success. They have been, or will be, removed by the engineering skill of the men of the seventh floor. What about Cuba? “When the American response forced the removal of missiles from Cuba, Moscow’s post-Sputnik offensive was over.” “The Cuban missile gambit was then mounted, and its denouement brought to an end, for the time being at least, the notion that vital interests of the free world would be surrendered unto the threat of nuclear war.” Not a word about the transformation of Cuba into a political and military out-post of the Soviet Union, not a word about the Bay of Pigs invasion. What about the crisis of the Atlantic Alliance and of European unification? “We are in the midst of the laborious but critically important process of working out the terms of partnership in military matters, in trade, in problems of currency and reserves, in aiding the underdeveloped areas, and in the field of intensified political consultation. Despite the frustration of British entry into the Common Market and the continuing debate on the future structure of the Atlantic Alliance, we have quietly made limited progress on all these fronts.” What about the failure of the Alliance for Progress? “We needed, for example, a policy which would align the United States actively with the great forces in Latin America which seek economic development and greater social justice. To this our response was the Alliance for Progress.” And so on, and so on.

However, the suggestion that this is mere propaganda must be dismissed as too simple. We are not in the presence of propaganda as the conscious manipulation of public opinion on behalf of official policy. If this book were merely that, it could be dismissed without a critical word. What is so disturbing and also fascinating in this book is exactly the contrast between the firm convictions and intellectual honesty of its author and the caricature it presents of its subject matter, the foreign policy of the United States. Mr. Rostow has a powerful, brilliant, and creative mind. How could such a mind produce such trash? The answer lies in the corruption of power and the defenselessness of the intellectual in the face of it. The intellectual as a social type is singularly deprived of the enjoyment of power and eminently qualified to understand its importance and what it means not to have it. Thus campuses and literary circles abound with empire builders, petty politicians, and sordid intriguers—all seekers after power, the substance of which eludes them. When an intellectual finds himself in the seat of power he is tempted to equate the power of his intellect with the power of his office. As he could mould the printed word to suit his ideas so he now expects the real world to respond to his actions. Hence his confidence in himself, his pride, his optimism; hence, also, the absence of the tragic sense of life, of humility, of that fear and trembling with which great statesmen have approached their task, knowing that in trying to mould the political world they must act like gods, without the knowledge, the wisdom, the power, and the goodness which their task demands. As John Adams put it:

Power always thinks it has a great soul and vast views beyond the comprehension of the weak and that it is doing God’s service when it is violating all His laws. Our passions, ambitions, avarice, love and resentment, etc., possess so much metaphysical subtlety and so much overpowering eloquence that they insinuate themselves into the understanding and the conscience and convert both to their party.

Mr. Rostow’s book is dedicated “to the members of the Policy Planning Council, past, present, and future.” Thus it is also dedicated to Mr. John Paton Davies, Jr., who was a member of that group until he was sacrificed on the altar of McCarthyism by Mr. Dulles in what must have been the most shameful official act ever performed by an American Secretary of State. Mr. Davies calls his book Foreign and Other Affairs, “A View from the Radical Center.” What Mr. Davies sees from the “radical center,” whatever that may mean, has nothing in common with the view from the seventh floor, except for the historic setting. In philosophy and style, arguments and conclusions, these two books are as different as two books can be. The first sentence of Mr. Davies’ book sets the tone: “As in a deep and troubled sleep, wrapped in exalted yet fearful dreams, American foreign policy walked into the decade of the 1960s.” Only two major facets of our foreign policy have any relation to reality: the maintenance and improvement of our military posture and our contribution to the economic recovery of Western Europe and Japan. Everything else, according to Mr. Davies, is somnambulism, policies which can be explained not by the demands of reality but by “the subjective drama in a world of the subconscious.” From this perspective, Mr. Davies examines critically some major issues of American foreign policy. Foreign aid, military dictatorship, nuclear strategy, the United Nations, the Soviet Union, China, Europe, the administration of our foreign policy, the new diplomacy of public relations, and ideological intervention are discussed with knowledge, wisdom, urbanity, and wit.

This is the book of a professional who knows the world and has a sense of history. It is full of profound insights, sometimes surprising even to the expert who has reflected on the same problems. Take, for instance, the discussion of the administration of American foreign policy which starts with a comparison between the Confucian literati, the English public school, and the Communist party of the Soviet Union, on the one hand, and our foreign service, on the other. It concludes that “We would not entrust any segment of our personal affairs to an institution, whether bank, hospital, or school, managed in the manner that our collective security and well-being are administered.” It has some useful and witty things to say about the diplomatus interruptus, the political appointee who doesn’t stay long enough to learn what foreign policy is all about. Mr. Davies concludes that “in the conduct of our foreign relations we are grossly overextended physically, emotionally, and intellectually.” His counsel is “moderation,” and here we are indeed at the core of political wisdom. It is a counsel easier to give than to follow, and Mr. Davies’ strictures against the United Nations are perhaps a case in point.

Both as analysis of foreign policy and as literature—it is a joy to read—this book is a worthy companion of the books of Mr. Acheson, Mr. Davies’ former chief, and those of Messrs. Louis Halle, George Kennan, and Charles Burton Marshall, his former colleagues. Reading this book and being reminded by it of its companions, one looks back with nostalgic admiration at that group of creative and devoted diplomatists who fashioned the post-war foreign policies of the United States in the late Forties and early Fifties, and one’s mind wanders back to the other creative period in American foreign policy, to Alexander Hamilton and John Quincy Adams whom Mr. Davies likes to quote. What an irony it is and what food it gives to somber reflection that Mr. Rostow now presides over the planning of American foreign policy and Mr. Davies manufactures furniture in self-imposed exile in Lima, Peru. 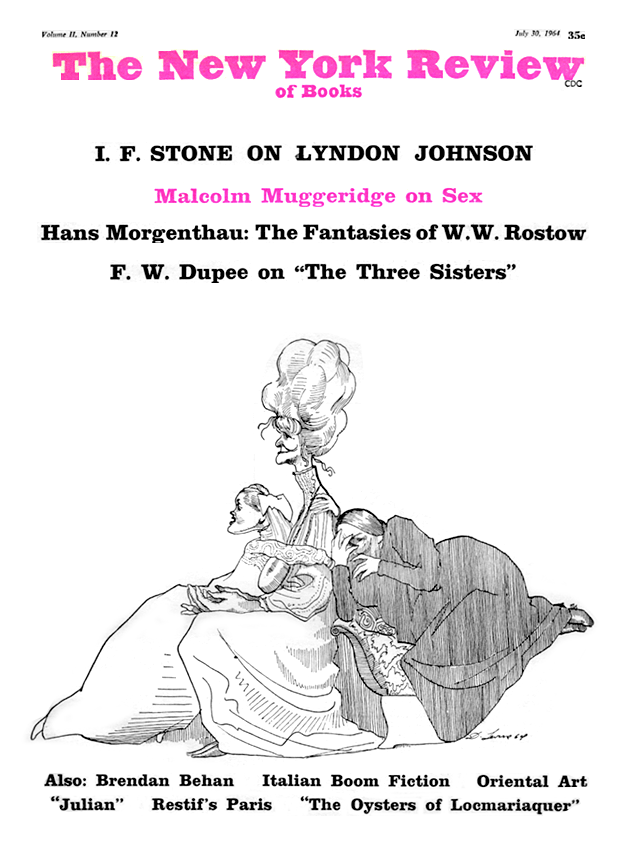 Reflections on the End of the Republic

Reflections on the End of the Republic

Hans J. Morgenthau (1904–1980) was a legal scholar and theorist of international relations. Educated in Germany and Switzerland, Morgenthau taught for many years at the University of Chicago; later in life, he moved to The New School and The City University of New York. His books include In Defense of The National Interest, Politics Among Nations, and The Purpose of American Politics.

Are We Safer? An Epilogue