Poor Corydon is now in California, driving the freeways with a day-dreaming ardor, attacking the ants with a Flit gun, and mourning among the hibiscus bushes. His name is George and perhaps he must be called the “hero” of Christopher Isherwood’s new novel, A Single Man. George is chagrined, restless, grieving over the death of his lover and housemate, Jim, as a widower would grieve for his wife. George is an Englishman. He is ironical, middle-aged, and yet boyishly passionate. His is a fairly modest anal disposition, respectable enough, with a finicky, faggoty interest in the looks of things—far from the corruption and splendor of his type in French fiction. And yet perhaps he is a little corrupt and a little splendid, too. George lives in a hideaway cottage on Camphor Tree Lane. He knows all about the human and decorative insults of suburban California; his tastes are low but his Taste, of course, is reasonably high. He is a perverse mixture of arrogance and shyness, suspicion and indifference. Devastating revolts threaten in daydreams, but in truth he is controlled enough to get by. His neighbors, the Strunk and Garfein couples and their rackety children are the object of George’s fears and his satiric vexation.

George teaches at San Tomas State College in Los Angeles. If he were not so “English,” so plausibly bred, he might, as he faces his classroom of boys and girls lined up before him like bulldogs, be some S. Levin out of Malamud. His entrance into the classroom “is a subtly contrived, outrageously theatrical effect.” When he gives his brittle, hysterical lecture on Huxley’s After Many a Summer, we see that George is not a real teacher, but one of those American artists or writers, hanging by his fingernails to his academic and sexual freedom, making a diversive display to hide a natural leaning toward indiscretions.

George is abjectly presented. Indeed his first scene takes place on the john. (“George feels a bowel movement coming on with agreeable urgency and climbs the stairs briskly to the bathroom book in hand.”) The book is by Ruskin and from his throne George looks down upon Mrs. Strunk “emptying the dustbag of her vacuum cleaner into the trash can.” It is not Isherwood’s purpose to write a novel “about” homosexuality; rather, he appears to want to present, without “scholarship,” or explanation, a homosexual who is, so to speak, just like everyone else, who claims his rights to be allowed to go about his homosexual life—a life curiously, in its little cottage, its domesticity, its social compromises, remote from angularity and singularity. There is a lot of Mr. and Mrs. Strunk—or is it Mr. and Mrs. Garfein?—in George and Jim. They too are emptying, day in and day out, the dustbags into the trash can.

So George is a natural man, compromised, self-conscious, irritable, but nevertheless keeping up his exercises (and his all too easily aroused hopes) at the gym, telling his little jokes and still heroically on the make. He is slight: that is to say we see him for only one twenty-four hour period, as he struggles through his slices of life, all bare of poetic ornamentation and free of strenuous intention. The events of the day are mostly routine in the accepted sense; when they are unusual they are still routine to George’s erectile existence. In a melancholy scene, George dines on “Borneo stew” with another English survivor of cocktail parties and dead love affairs: a lady named Charlotte—called “Charley”—who wears embroidered peasant clothes. They get very drunk and Charley, as prone to squalid, sexual hopes at the wrong time as George himself, begins to think—well, why not? Maybe? Who knows how that Jim has gone? “As they embrace, she kisses him full on the mouth. And suddenly sticks her tongue right in!” In the end, Charley defers to reality and changes the subject.

Late at night, staggering, George goes through his eternal return: a mystifying, exhilarating encounter with a normal man. At a bar he meets one of his students, Kenny, who has come to look for him. George’s heart leaps up with excitement, wonder, joy. Is Kenny flirting with him? Are these teasing remarks full of invitation and promise? But Kenny disappears after a devastating (for George) swim in the nude and the questions are still unanswered. George is left with his onanistic, explosion, a grateful moment in which he can, in imagination, order all the players about. “George hastily turns Kenny into a big blond from the tennis court. Ah, much better! Perfect! Now they can embrace. The fierce hot animal play can begin.”

Mr. Norris with his perfume, his giggles, his wig, his moans of joy in the sadistic brothels of Berlin of 1931; Peter Wilkinson, the weak, spoiled English boy enslaved to Otto Nowak; the hinting end of Prater Violet (“Love had been J. for the last month…And after J., there would be K. and L. and M. right down the alphabet”). Isherwood’s books have all been homosexual in spirit; even campy. Perhaps the surprising thing is that he has so often been able to be a serious artist at the same time. For instance, about Germany in the 1930’s few works of fiction have told us more than these peculiar, pansyish stories. Even in style, in form, his work was strikingly appropriate. He had found the way around falsity and exaggeration by simplicity and directness. One had the feeling, often, that this was not fiction at all. The stories seemed entirely natural and easy: they were simply strokes of good luck, seized upon by a clever author. The luck to have been in Berlin, the luck to meet Sally Bowles. Imagine knowing an outrageous man like Arthur Norris or doing a film with the director, Dr. Bergman. And there, standing aside from the whippings and the abortions and masochistic brawls, was the austere, beautiful Landauer family, to whose strict and touching daughter, Natalia, (“‘You are lazy?…So? Then I am sorry. I can’t help you.”‘) Chris had the good fortune to give English lessons. In “The Landauers” Isherwood wrote one of the most poignant stories about the suffering of the Berlin Jews.

The easy manner—the use of his own name—gave the tone of journalism, of reportage, of a superlative ease. There was not much invention, but there was perfection, rightness. All the events in the early books, up through Prater Violet, seemed to be just life itself, without manipulation, without the temptation of the hope of aggrandizement by formal means. “I am a camera,” he insisted. And one of the sections of a more recent book, Down There on a Visit, begins: “Five years have gone by—this is May 1933—and here I am, starting out on another journey. I am on a train going south from Berlin toward the Czechoslovakian frontier. Opposite me sits Waldemar.” Involvement, spontaneity, actuality are all meant to be suggested by his manner, but it is a very special Ishwerwood autobiography, the autobiography of “experiences” rather than Experience. It is Waldemar, not grandma, that seems at the center of everything. Perhaps it is natural that his straight reporting would appear less true than his fiction. In a travel book about Peru and Ecuador, The Condor and the Cows, a great deal seems made up, rewritten, arranged, and so there is a loss of vivacity. The expected travel scene does not raise Isherwood’s talent to a heat. “Last night, Mr. Smith and his wife asked us to a party at their house where we met Mr. Mott, the manager of the Shell Oil Company of Ecuador.”

After Prater Violet, Isherwood began to choose more ordinary ground for his social comedy, particularly in his “straight” novel, The World in the Evening, and in the setting of the new one, A Single Man. (Down There on a Visit is something else. It is saturated with all the knowledge of vice Isherwood had somehow made into art previously, but it is claustrophobic, decadent. You feel as if you’d suddenly joined an evil houseparty that had been going on for a month.) In the end we see that Mr. Norris is more real to Isherwood than the coke drinkers before their television sets. Satire of the ordinary, the usual has for him, as for other novelists, the risk of trivializing genuine emotions. In The Condor and The Cows, he mentions a young American couple on their second honeymoon. “After years of accepted routine—office work, raising children, shopping, cooking—you take your marriage out of its little suburban frame and set it against a tremendous classic background of ocean, mountains and stars. How does it stand up? Is it self-sufficient, deep, brilliant and compact as a Vermeer? Or a messy amateur sketch which doesn’t compose?” That cuts the young couple down like lightning. Better any old tat lady on the dance floor than that. In A Single Man he writes, as others before him have about America, “(‘old’ in our country of the bland, has become nearly as dirty a word as ‘kike’ or ‘nigger.’)” When you are dealing with fundamental ideas, jauntiness of style may offend against the truth. It is the satirist and not his object who appears trivial.

In the earlier works, in The Berlin Stories, The Last of Mr. Norris and Prater Violet, everything pure in Isherwood’s talent came together. His masochistic fascination with vice did not spoil his nature; he was a perverse and yet a liberal, free spirit. As time went on, the spirit seemed to tire a little. Compulsion, isolation defined his mood. The body had become a terrible enemy. A Single Man begins and ends with brute biology. George’s demeaning day opens as “fear tweaks the vagus nerve…But meanwhile the cortex, the great disciplinarian…has taken its place at the central controls and has been testing them, one after another…” In the evening, the unhappy vespers sound: “Within this body on the bed, the great pump works on.” So, poor Aurelia’s growing old. George will, perhaps, soon have a heart attack and his cruising, his longing will be over.

Looking back over the novels, you see an Isherwood who is pleasure-loving and yet guilty. Down There on a Visit shows us that the life is Hell. The boys are really awful, pretentious, shallow, dishonest; the women are disgusting; and Hollywood, where one works, does not ennoble. The detachment—malicious but not forbidding—has changed to fatigue. What had been amusing is now seen by Isherwood as the trap, the humiliation. If A Single Man seems tired, it is also true in feeling. It is a sad book, with a biological melancholy running through it, a sense of relentless reduction, daily diminishment. From the morning toilet to the evening masturbation—that is its sadly swinging arc…. The Bhagavad-Gita, the California monastery, Gerald Heard—those flights of Isherwood’s about which we have heard, the hope for peace, the escape, are not without point. 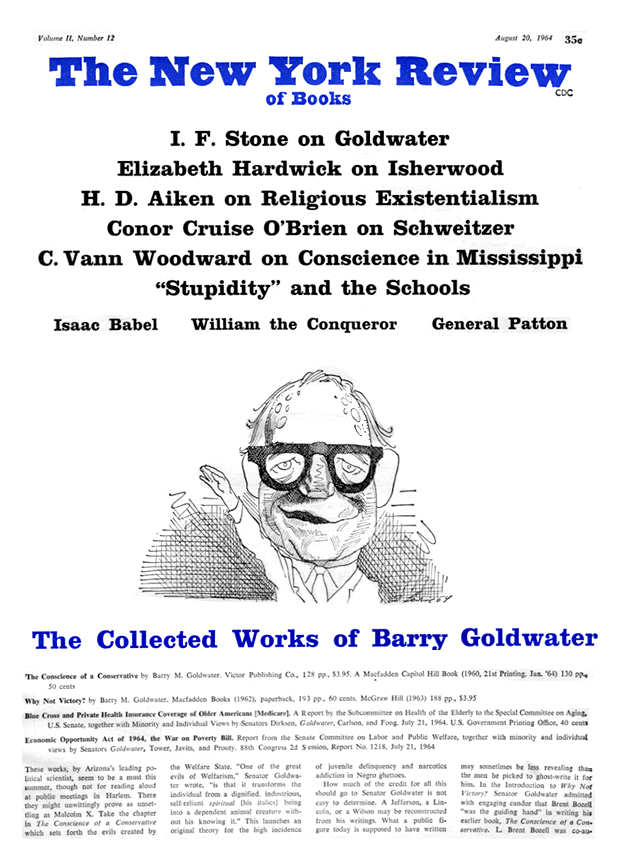 Elizabeth Hardwick (1916–2007) was born in Lexington, Kentucky, and educated at the University of Kentucky and Columbia University. A recipient of a Gold Medal from the American Academy of Arts and Letters, she is the author of three novels, a biography of Herman Melville, and four collections of essays. She was a co-founder and advisory editor of The New York Review of Books and contributed more than one hundred reviews, articles, reflections, and letters to the magazine. NYRB Classics publishes Sleepless Nights, a novel, and Seduction and Betrayal, a study of women in literature.