After six months of private circulation among government officials and a steadily widening circle of increasingly loose-mouthed journalists, the controversial “Moynihan Report” on the Negro family has been released to the public. Actually, the name of Daniel Patrick Moynihan appears nowhere on the 78-page pamphlet. But the authorship of the former Assistant Secretary of Labor for Policy Planning (who recently ran unsuccessfully for the Democratic nomination as President of the New York City Council and is now rumor’s favorite candidate for almost every important unfilled job in Washington) is no secret. Nor is it any secret that this document, while not an official statement of federal policy, has influenced recent thinking at every level of government. It lay behind the President’s call for a White House Conference in November on the problems of Negroes in general and Negro families in particular.

Moynihan’s thesis can be summarized as follows: 1. American slavery was the worst version of slavery in human history. 2. The legacy of Negro slavery in America was twofold: segregation and discrimination against Negroes by whites, and establishment of an American Negro culture which disqualifies many of its participants for life in modern America even when the terms of competition are fair and opportunities open. 3. The central defect of American Negro life is the “matrifocal” family, in which the male is a transient who provides neither a regular income, consistent discipline and direction, nor an example to his sons of what they might hope to become as adults. 4. The psychological, social, and economic problems generated by matriarchy are getting worse, not better. Despite all the recent civil rights and poverty legislation, the chasm separating lower-class Negroes from the mainstream of American life is growing wider and deeper. Only a minority is acquiring the more patriarchal, middle-class family style, and only a minority shows signs of participating in the middle class’s increasing affluence. 5. The establishment of a “stable” (i.e., more or less “patrifocal”) Negro family structure should therefore be made a national goal, and national policy in many different fields should be adjusted to promote this goal.

Moynihan’s analysis is in the conservative tradition that guided the drafting of the poverty program (in whose formulation he participated during the winter of 1963-4). The guiding assumption is that social pathology is caused less by basic defects in the social system than by defects in particular individuals and groups which prevent their adjusting to the system. The prescription is therefore to change the deviants, not the system.

Two years ago the children of the poor were to be helped to escape from the “culture of poverty” by more intensive schooling, induction into the Job Corps, provision of more guidance and counselling, and so forth. Now the lower-class Negro family is to be made more like the middle-class white family—though by means which Moynihan does not specify.

Needless to say, this approach has met with enthusiastic support from those middle-class Americans who feel that if “they” were just more like “us,” everything would be all right. (Many successful Negroes hold this view, and some of them are active in the civil rights movement.)

Those activists and intellectuals who instinctively defend the interests of the Negro lower classes have been irate, and to my mind somewhat paranoid, about the Report. They argue that there is nothing inherently wrong with matriarchal families, that lower-class Negro family life is in many respect similar to family life in other groups (the more divorce-ridden segments of the white upper class are often cited), and that picking out the Negro family for improvement is a subtle form of racism. They also suspect that by focusing attention on the Negro family the Johnson Administration is really trying to escape from responsibility for other Negro problems, such as unemployment, political exclusion, police brutality, poor housing, and so on. Finally, the radicals have maintained that even if the Negro family is in trouble, it is not a proper target of governmental action, and that involvement in such issues is a first step toward 1984. (This hostility to expanding the role of the federal government seems to derive largely from a fear that the government will try to impose sexual continence and fidelity—virtues which almost all critics think greatly overrated.)

Whether lower-class Negroes would be as offended by the Report as their middle-class critics is hard to tell, since they are obviously in no position to make their views known. Nevertheless, it is difficult to discuss the subject intelligently (or morally) without knowing whether the families in question are matriarchal by necessity of by choice. If they are matriarchal by choice (i.e., if lower-class men, women, and children truly prefer a family consisting of a mother, children, and a series of transient males) then it is hardly the federal government’s proper business to try to alter this choice. Instead, the government ought to invent ways of providing such families with the same physical and psychic necessities of life available to other kinds of families. But there is little evidence to suggest that lower-class Negroes really prefer matriarchal families. On the contrary, there is considerable reason to suppose that they eagerly adopt the more patriarchal middle-class norm whenever they can. In that case, the government surely ought to help them do so, by attacking wholesale unemployment among Negro unskilled men, by altering welfare laws which encourage desertion, and even (as Moynihan implies) by making it easier for Negroes to get into the Armed Forces if they want to. Indeed, if the new emphasis on “stabilizing” the Negro family means giving Negroes a free choice between living as they now do or as the white middle classes do, it is hard to think that even the radicals will oppose it. 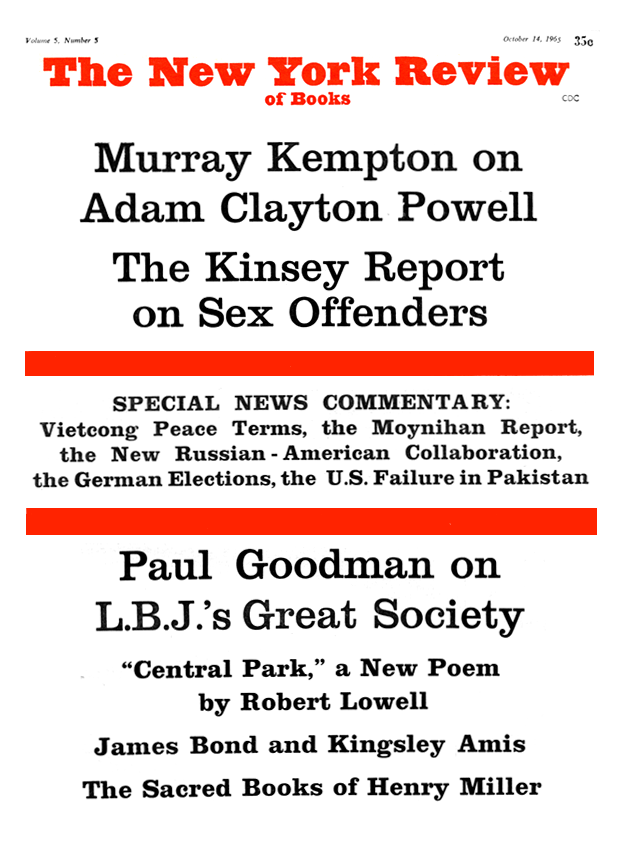 Why the Very Poor Have Become Poorer

The Poor in College

Did We Lose the War on Poverty?—II

Why the Very Poor Have Become Poorer

The Poor in College

Did We Lose the War on Poverty?—II

Christopher Jencks is the Malcolm Wiener Professor of Social Policy at Harvard. He is the author of Rethinking Social Policy and The Homeless, among other books. (June 2016)