I regret that obligations of a non-political character—sickness in my family—took me out of circulation at the time Irving Howe’s reply to my letter [Jan. 6] appeared. Since the same obligations have made it impossible for me to participate in the Dissent forum on Vietnam, may I reply briefly to his observations on my letter?

At first glance one might think that Irving Howe had become a pacifist. However, he is far too honest to assume for rhetorical purposes a position which—while convenient—is not representative of his views. And I am sure that under certain circumstances Howe would approve of violence. If Israel were, for example, jumped by the Arabs, Irving might write a morose article for Dissent pointing out that a socialist Israel would have been safely located on an island in the Indian Ocean, but he would, I am certain, be with me in demanding American intervention to defend this democratic society against aggression.

Since he is not a pacifist, what can we make of his argument that our intervention in Vietnam is immoral because we are killing innocent people in the battle against communist terrorism? Belgian friends tell me that more of their compatriots were probably killed accidently by the Allies in 1944-45 than were killed by the Nazis. Should we have, therefore, refused to liberate Belgium from Nazi rule?

I am afraid that if Howe wishes to level a moral critique against our intervention in South Vietnam, he has only two positions to choose between. He can either adopt integral pacifism or announce that Hanoi is engaged in a just war. To put it differently, he must face up to the fact that war always involves the death of the innocent and state that the killing of these innocents is wrong because war is wrong—or because they are being killed in an evil cause, to prevent communist hegemony in Vietnam.

It is not hard to imagine a sophisticated Nazi saying to John Roche: “Why so indignant about our ‘war crimes?’ You are not an integral pacifist; you know men must be killed in war, both guilty and innocent men. You judge certain unpleasant methods used by us to be atrocities; we looked upon them as necessary for conducting our kind of war. Do you presume to advise us on how we should have fought against you? Besides, as you know, more Belgians were killed accidentally by U.S. bombs than by the Gestapo. So please, Herr Professor, tell me that your side proved more powerful; tell me that you prefer your political aims to ours; but do spare me your moralizing…War is war…”

Now I think John Roche would know how to answer this sophistry, but I doubt that he could answer it effectively by employing the kind of argument which appears in his letter. For it is surely an error to suggest that if one accepts the necessity of force on certain occasions, one is there by disqualified from making judgments as to the rightness and appropriateness of its use. Quite the contrary. For the pacifist it is all easy: he has a ready answer for all occasions. But for those of us who are not pacifists yet wish to live by humane values, there is all the greater need for moral self-scrutiny and criticism, even—especially—when these become tormentingly entangled with political expediencies. A readiness to employ force on certain occasions does not relieve one from the obligation to keep asking: Is its use warranted here? Has it become an end in itself? Is there still a defensible relationship between the proclaimed end in behalf of which the force is being used and the actual destination to which it may be driving us?

Still, I grant that my, or anyone else’s, view of the war in Vietnam is not validated by the mere fact that people are being killed there. The truth is that no one, not even the most absolutist of pacifists, puts the matter in so simple a way. In a reply I wrote to a previous letter by Mr. Roche I raised several questions in which political and moral issues become, as they almost always must, inseparable:

a) The U.S. is intervening in a war (partly a civil war, partly a war between manipulated agents of big power blocs) in which there is no clear mandate from the people of Vietnam. We have employed indiscriminate mass bombing and, as in the example I cited of the Seventh Fleet shelling the coastal village of Duchai, have caused enormous suffering. Even for those of us not in principle opposed to every kind of intervention, the question then arises: how is this kind of action to be validated? can it be? Suppose the people of Vietnam, if they could speak, were to say to us in the words of the immortal Yiddish proverb: Go Break Your Own Head! There may not be easy answers to such problems, but I wish John Roche weren’t so infatuated with the stance of Realpolitik as to subsume them so readily under what he regards as the political needs of anti-Communism.

b) The employment of mass bombing in Vietnam is due not merely to military callousness; it is the consequence of more than a decade of political failure, stupidity, reaction. Having failed to offer a socio-economic program that might appeal to the people in the cities and the countryside—even if such a program might violate U.S. “free enterprise” ideology and cross the interests of the local landowners and mandarin bureaucrats—we are now trying to “compensate” through sheer military power. If we can’t reach the people of Duchai through a politics that will turn them away from the Communists, then we will “protect them from Communism” by bombing the hell out of them. This, I think, is an immoral policy. It is almost certainly a disastrous policy as well, not least of all because

c) Using such methods will create terrible hatred against the white invaders among the people of Vietnam. The New York Times correspondent Charles Mohr recently wrote from Vietnam that he had seen an eleven-year-old boy whose family was killed by U.S. shells; four years from now, concluded Mohr, that boy will be a Vietcong partisan.

There is a kind of cold comfort in reducing things to either/or, but it is neither good politics nor clear thinking. Please, let us avoid the simplistic destruction of political choice in the name of political realism. 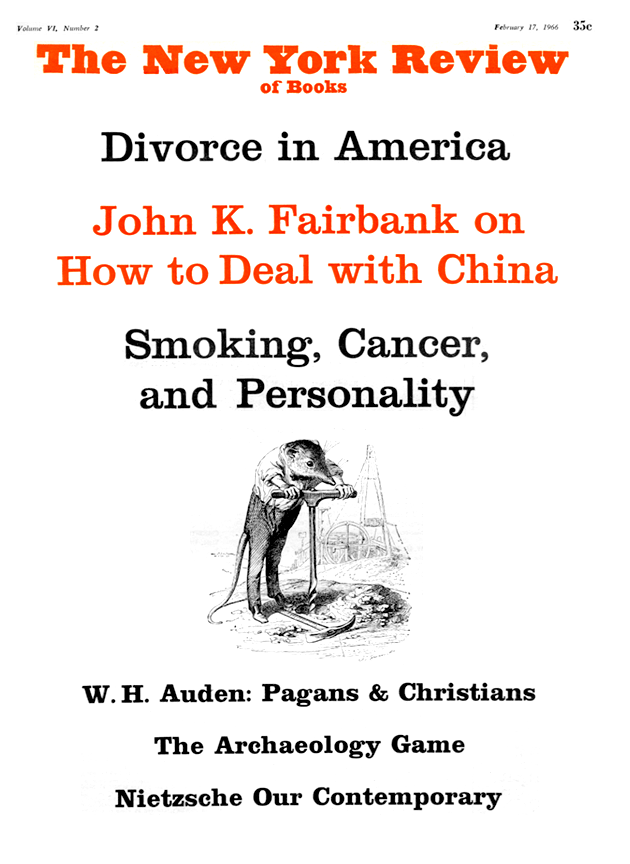 Can the War End?

Poems from the Vietnam War

The Abuse of McNamara