In his comments on my contribution to A Critique of Pure Tolerance (June 9, 1966) Professor Henry Aiken refers to me as “scandalized by the consequences that ideas can have.” I am much more than scandalized; I am terrified by the consequences of facism, communism, and now of liberal democracy as revealed by current American policy in Vietnam. That is one reason I wrote the essay, “Tolerance and the Scientific Outlook.” Among the many causes of these horrors seems to be the belief that moral and political issues present problems for which rational and scientific solutions are inherently impossible. It occurred to me that this notion might itself be a myth; that such problems might be soluble according to a broad conception of scientific method. These points I endeavored to argue in the essay. If Professor Aiken had explained where the argument went off the track, instead of remarking, “nowhere, of course, does Moore show us how his secularist ideals can be validated through procedures exclusive to the scientific outlook…” perhaps I and others might have profited.

Instead he resorts to a variety of epithets. Being called a virtually deracinated positivist rather charms me, and for the rest I am content to let readers decide about who is being tame and academic in calling for a return to Locke. Indeed I wish the problems were that easy.

Professor Moore’s conflation of my epithets, “deracinated liberal” and “raucous positivism,” is his doing, not mine. But if it charms him, he is welcome to it; if only it were true of him! Incidentally, I didn’t “resort” to epithets in describing his point of view; I chose them with some care in order to indicate briefly certain qualities of his essay. I don’t claim that they are as accurate as “Aristides the just,” but his letter confirms their essential propriety: It shows, that is, that his scientistic and secularistic “outlook”—for which positivism is one name—is evidently congenital; it shows also that, in relation to liberal democracy, he has been deracinated by recent American foreign policy. For his “horror” of that policy appears to have alienated him from the whole political system which that policy, for the time being at least, seems to tolerate. In fairness to Professor Moore, as well as to myself, let me say that all liberals, in these trying times of misguided, undeclared, and hence undemocratic, war abroad and of token equality and justice for so many “disadvantaged” human beings at home, must share Professor Moore’s horror. His own case is significant because it illustrates the fact that the deracination which afflicts him and Professor Wolff could affect a great many liberal Americans were there no way within our political system to right these grievous wrongs.

This is why I found his essay so disquieting, and why, accordingly, I learned something from reading it. But I also learned another thing, as I pondered the essays of Professor Moore and his friends: The evils that we all endure and sometimes condone, in our imperfect liberal democracy, are not caused by our liberal democratic principles, fleshed out in our marvelous founding documents, but by our disloyalty to them, by our inertia, our greed, our foxy, anti-ideological “pragmatism,” our increasing confusion of liberal democracy itself with consensualism. But there is, thank God, no consensus regarding the Vietnam war and none in regard to the American versions of apartheid. And it is the liberal-democratic side of our socio-political establishment that makes it possible for us to attack these and other profound faults and that provides a secure legal context for some of the most searching, persistent, and radical self-criticism which any polity has ever been asked to endure (tolerate). This is why I am indeed a part-time Lockean, rather than a full-time Moorean. What impresses me is not only the wickedness and foolishness of our foreign and military policy in many parts of the world, but also the increasing and open attack upon that policy, both inside and outside the government itself. No political order that permits a debate so ranging and so prolonged, in time of unclear but present danger, can have wholly lost its integrity. Quite the contrary.

Let me take this occasion to issue a warning to Professor Moore and other similarly deracinated liberals: Should our liberal democracy, with its bill of rights, its commitment to periodic democratic elections, and its institutional pluralism, collapse, it will not be the radical left with whose intolerance we will have to cope, but that of the radical right. And it will then be people like Professor Moore himself who will be among the first to mourn the passing of liberal democracy. Unfortunately, if they survive, they will have to do their mourning behind closed doors.

This issue is of such vast importance, as it seems to me, that I have left no space to reply fully to Professor Moore’s complaint that I failed to show where his “argument,” purporting to explain how the great moral and political problems of our age can be solved by ordinary scientific methods, went off the track. I am sorry to say that he asks the impossible. I could not show him where his argument went off the track for there was no argument, only increasingly emphatic reiteration of an unfounded hope. The method of science (bless it) is a procedure for securing trustworthy beliefs, general and particular, about matters of neutral empirical fact; its role is to organize and to test our ideas about the world we live in, not to prescribe how we should comport ourselves within it. This “limitation,” however, is not something to complain of, but to understand, so that one will not be misled by essentially irrational attempts to apply scientific methods to problems with which it is not designed to deal. I don’t complain because the method of science cannot produce, or verify, the loveliness of The Marriage of Figaro. Similarly, I don’t complain because science cannot establish, or disestablish, secularist ideals. I complain only of scientistic philosophies which equate rationality with the method of science, and so make it appear that if science, as such, cannot tell us what to do, then we are free to do just as we like. But this of course is a complete non sequitur. 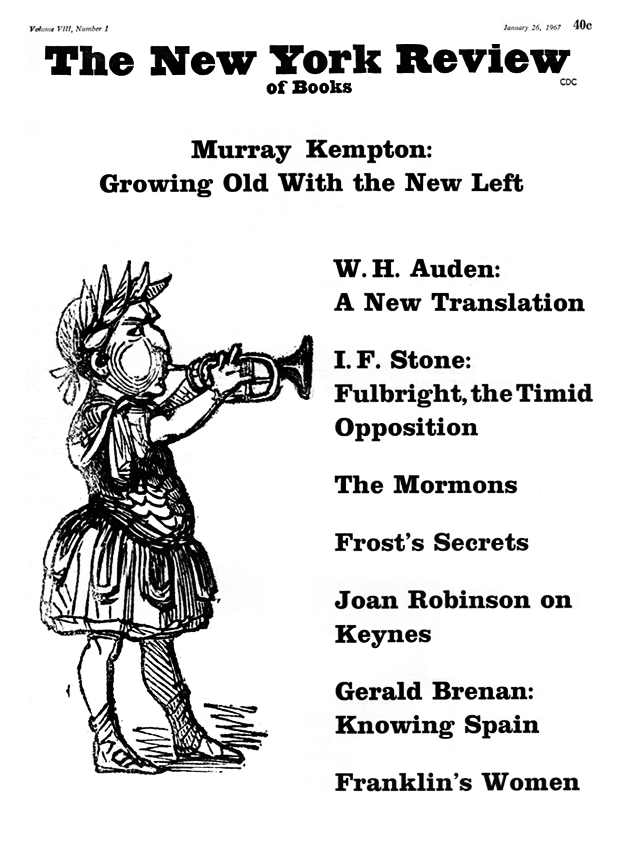 A Mosaic for Marianne Moore

An Appeal in Iran