Reading the recent excellent article, “On the Draft,” [NYR, April 6] I find again, as I have done in the case of other discussions of this most embarrassing topic in contemporary “liberal-democratic” America, an inability to focus directly and steadily on a basic issue: Shall young men (or women), not yet legally of age, and hence unable either to vote or otherwise to participate fully in our constitutional political life, be required to submit to a peacetime draft which nonetheless may commit them, among others, to possibly supreme human sacrifices? Such a question takes us at once to the heart of what we are to understand by civil and political rights in a democracy, by the concept of representative government, and by moral principles of equality, justice, and community. By my standards at least, no remotely adequate answer to the question has been given. What is so queer is that neither the young people themselves nor their apparently unconcerned parents have cared—or dared—to press it.

Perhaps, in the past, it has sometimes been necessary to require military service that involves the risk of life as well as of health (including mental health), of relatively inexperienced and immature youths who alone are capable of enduring the full rigors of modern war. Possibly, just possibly, it may still be so. Alas, not all of us, throughout our lives, have the makings of modern military men; not all of us are any longer strong enough or quick enough to do the necessary when the going gets rough. Drafted, we would doubtless increase the danger and the misery of our own sons. And no one, I suppose, wants that. Thus, all wearily, let us admit that where the danger is very present and very clear, and a state of war, properly pondered, has been duly declared by constitutional means, such service, severely selective though it must be, may conceivably be justified. But if it is justified, then I am convinced those subject to the draft must (a) possess the vote, and (b) be free to participate fully in all of the political processes whereby candidates for office are chosen, platforms set, and national policies determined. If taxation without representation is unjust, then a draft of any class of citizens for military service is unjust unless its members are properly represented. I deny that our young men and women are properly represented, either in the congress, in the presidency, in the judiciary, or on the draft board. No doubt there are many others who, because of their skin color, their poverty, or their practically irremovable ignorance, are very inadequately represented either in the political parties or in the government. But such injustices are as nothing in comparison with the injustice that is done to non-voting, unrepresented youths who have the courage to risk jail for the burning of their draft cards. Some, as the article in question suggests, are all too happy to go into the armed forces; there at least they have a job of sorts, food and clothing and a pocket full of change to spend as they please. In their case, the injustice remains. Others believe not only that they have been unfairly drafted by a government which does not represent them, but that the “cause” for which they are asked to fight is immoral, senseless, and, from the standpoint of the so-called national interest, bizarre. In their case, the current debate over the justice of the draft must be a grotesque irony.

I say, then, that if youths are old enough to go to jail for burning their draft cards, they are old enough to vote. If they are old enough to grasp the nature of mechanized and automated warfare, and to participate in it, they are old enough also to participate in something more than Young Republican Clubs and Young Democratic Clubs in their schools and colleges. And if they lack the seasoned wisdom which we, their parents, are supposed to possess, then they may well be better off without it. Where you have to lay your life on the line, you quickly acquire all the maturity there is. Let us, then, have done with peacetime drafts of youngsters who are, and are treated as, halfcitizens and who serve only as the pawns in a game of folly. And let us have no more proposals for a paramilitary “national service” into which young people are forced by a government in which they cannot participate. That way lies precisely the political system against which we are supposed to be fighting. 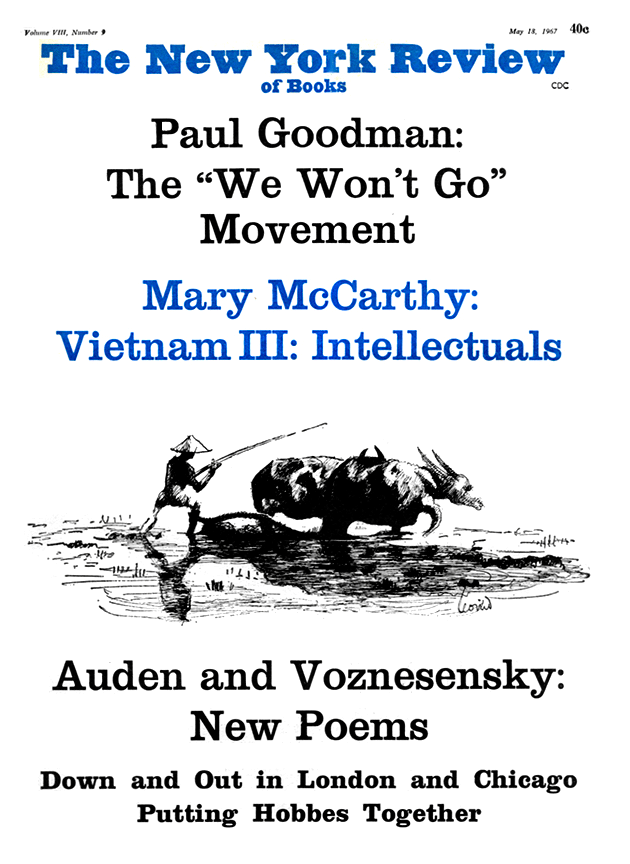 An Exchange on Sidney Hook

An Exchange on Sidney Hook

How to End the War in Afghanistan

Guatemala: A Government Program of Political Murder: The Amnesty Report

The Draft and Its Opposition