It is surely commendable on the part of I. F. Stone to want to give a fair hearing to both sides in the Israeli-Arab conflict, but a close reading of his essay raises grave doubts as to how fair, or truthful, he has been in his presentation of the issues. Near the end, Mr. Stone does finally admit that he has felt “honor bound” to give more space to the Arab than the Israeli side, but one wonders what sort of honor it was that bound him to distort certain plain facts by direct assertion or innuendo and to pass over other, bothersome details in discreet silence.

Thus, he can speak of “such savage massacres as Deir Yassin” as a chief cause of the original exodus of Palestinian Arabs, when he should know perfectly well that the tragedy of Deir Yassin was the only incident of its kind in the 1948 war. At the same time, he can casually bracket the moderate majority force of the Haganah (“Jewish terrorism…in milder form”) with the Irgun, when in fact Haganah opposition to the Irgun’s extremism was so vehement that the two groups were at some moments close to civil war. (There is, needless to say, no mention in this connection of the left-wing Shomer Hatzair, which distributed leaflets at the beginning of the war entreating the Palestinian Arabs not to leave, though Mr. Stone’s own writings of the late Forties indicate some acquaintance with these facts.)

Zionists, we are informed, “have always preferred to forget” the passage in the Balfour Declaration guaranteeing the civil and religious rights of minorities, when in fact this very passage has been repeatedly pointed to with pride by Zionists, finally to be incorporated in Israel’s Declaration of Independence of 1948. While Mr. Stone devotes much space to Israel’s responsibility for the plight of the refugees, not a single allusion is made to the brutal fact that the Egyptian government has kept the refugees in concentration camps for nineteen years, has cynically refused to take any steps toward their absorption or the amelioration of their lot, because of its self-interested political purposes….

Even the stratagems of Mr. Stone’s rhetoric are somewhat puzzling for a writer self-avowedly in pursuit of fairness to both sides. Israel in 1947-48 is described as having “seized about 23 percent more territory than was allotted to it in the 1947 partition plan”—and so we are led to infer that Israel tried to grab what it could in a program of territorial aggrandizement, though the only reason for Israel’s fighting at all was the all-out attack on the Jewish population of Palestine by the armies of the surrounding Arab states, who categorically rejected the UN partition decision. Or again, Mr. Stone tells us that the 100,000 new Arab refugees were “encouraged” (his quotation marks) to leave, thus hinting through a crude ironic device what he would surely not presume to assert—that the behavior of the Israeli occupying forces was the primary reason for the new exodus….

Much graver, however, are Mr. Stone’s fundamental confusions about universalism and parochialism, nationalism and the idea of a Jewish state. Here it is important to see precisely from what vantage-point he envisages Jewish nationalism. Jew and Israeli, he asks us to believe, are to be distinguished through the “sense of mission as a Witness in the human wilderness” of the former, and the latter’s concern “only with his tribe’s own welfare.” Anyone familiar with the development of modern Jewish thought will recognize in these words the classic terminology of nineteenth-century German Reform Judaism, unmitigated in its appalling spiritual presumption or its aping of Christian notions. The idea of the Jew as universalist is not easy to reconcile with the variegated facts of contemporary Jewry, in this country or elsewhere, and even the more doctrinaire elements of Reform Judaism have by now pretty much abandoned Mission theology. Mr. Stone, however, is not deterred by the proven emptiness of the ideology: he proposes in effect a twentieth-century variation on the old, discredited slogan of classical Reform—instead of “German citizens of the Mosaic persuasion” he would have us “progressive thinkers of Mosaic descent.”

Unfortunately, it is from this quaintly anachronistic nineteenth-century perspective that Mr. Stone views both Jewish history and the nature of Jewish nationalism. “A certain moral imbecility,” he claims, “marks all ethnocentric movements.” Having established this principle as dogma, he can go on blandly to assert that the periods of greatest Jewish creativity have been associated with tolerant pluralistic civilizations. This manages to leave out the Hebrew Bible entirely as a product of Jewish creativity, and invites us to think of the Hellenistic and Muslim civilizations as modern pluralistic cultures, when in fact the Jews lived in them in distinct ethnic enclaves, usually discriminated against and sometimes bitterly persecuted. (The great medieval Hebrew poets—an ethnocentric lot if there ever was one—of “pluralistic” Arab Spain were in several notable instances exposed to mortal danger at the hands of their Moslem hosts, whom Mr. Stone imagines as having granted Christians and Jews “full equality.” The yellow badge, it should be remembered, is the invention of the medieval Arab world, not of the Christians.) To the extent that Mr. Stone takes cognizance at all of the Hebrew Bible and its intimate association with Jewish nationalism, he offers only the feeble echo of a long-discredited view, seeing the Bible, after Wellhausen and the nineteenth-century evolutionists, as a development from primitive tribalism to the Prophets, whose “greatness…lay in their overcoming of ethnocentricity.” More recent scholarship has shown that the universalist vision of Biblical faith, far from being the invention of the Prophets, was clearly present in the early stages of ancient Israelite history, and that the Prophets did not “overcome” ethnocentricity but shaped their vision in the heart of it, imagining the world in a universalist perspective that was solildy grounded in a loyalty to their people and a commitment to its continuation.

The real muddle at the core of Mr. Stone’s argument is the way he allows distinct key terms to flow into each other—ethnocentricity, nationalism, exclusionism, racism, tribalism. The last of these is the one he harps on most insistently and it shows how little he has thought carefully about the subject of his essay. Even the most elementary knowledge of the social sciences should indicate to Mr. Stone that there are no two more clearly opposed concepts than nationalism and tribalism. One must conclude, then, that he is deliberately using the word loosely, as a highly colored pejorative and nothing more…. Israel has its militant nationalists—fortunately, a distinct minority—but it is hard to see why it should be any more “tribalistic” than any other democratic society, or why, say, the Jewish intellectuals in Israel who write for Molad or Ha-aretz are “tribalistic” while those in America who write for the New York Review of Books are not. One of the remarkable facts of Israeli culture is the way its literary and intellectual life, its rapidly proliferating academic and scientific enterprise, have remained deeply in touch with the wide world of modern culture—indeed, are contributing to that world, as the recent award of the Nobel Prize to S.Y. Agnon, a notoriously “ethnocentric” writer with a profoundly universal vision, should suggest….

Mr. Stone professes to be struck with moral horror at the avowed desire of David Ben Gurion and Moshe Dayan to maintain Israel as a Jewish state, but he has himself contrived the source of his horror by his perverse association of the idea of Jewish statehood with racism, theocracy, and systematic, institutionalized persecution of minorities. Of some of this he seems to convince himself through the strength of transparently false analogies, comparing Israel vis-à-vis the Palestinian Arabs to Ferdinand and Isabella’s Spain persecuting and banishing its Jews, or to Hitler’s deportation of German Jewry. As one of a chorus of voices that have declared the fallacy of comparisons between Munich and Vietnam, Mr. Stone ought to be more sensitive to the power of bad analogies to cloud thought….

As liberals, Jews, or simply as people who have some modicum of sympathy for Israel as a new democratic state, we all want Israel to do everything it possibly can—and it surely has not done that yet—to end the suffering of the refugees, to remove their sense of a terrible injustice inflicted upon them. But amidst all these good intentions, we have to remind ourselves that the refugee problem is a function of the Arab-Israeli conflict, persisting now as a serious irritant, but it is not and has never been the source of conflict. If Israel tomorrow were to take back every Arab refugee of both wars, lavishly compensating each Arab in money and land, the surrounding Arab states would still be committed to the “liberation” of Palestine, the extirpation of the Zionist state. Israel has played an invaluable role in heightening Arab nationalism; and the hostility toward Israel has by now been institutionalized through both domestic indoctrination and foreign policy so that it has a very powerful momentum of its own in the Arab states….

What has Mr. Stone actually proposed? He looks back longingly at the idea of Buber and others of a binational state, though he seems to be aware that the effectuation of that idea at this point in history is not easily imaginable. (It should be stressed that binationalism was always championed by Jews in Palestine, never by Arabs, making it from the start a noble but doomed idea.) He considers briefly the notion of a confederated Arab state on the West Bank of the Jordan, but decides that this would only foster further hostility toward Israel on the part of the Arabs. He concludes that Israel should give the West Bank back to Jordan, though he does not specify what concessions or guarantees, if any, Jordan should make to Israel in return. Would such a unilateral concession on the part of Israel really lessen Arab resentment, or would it merely be interpreted as a sign of weakness, as the pre-war Eshkol-Eban policy of diplomacy and restraint was interpreted by the Arabs?

(I.F. Stone has recently been ill, and is therefore unable to reply.) 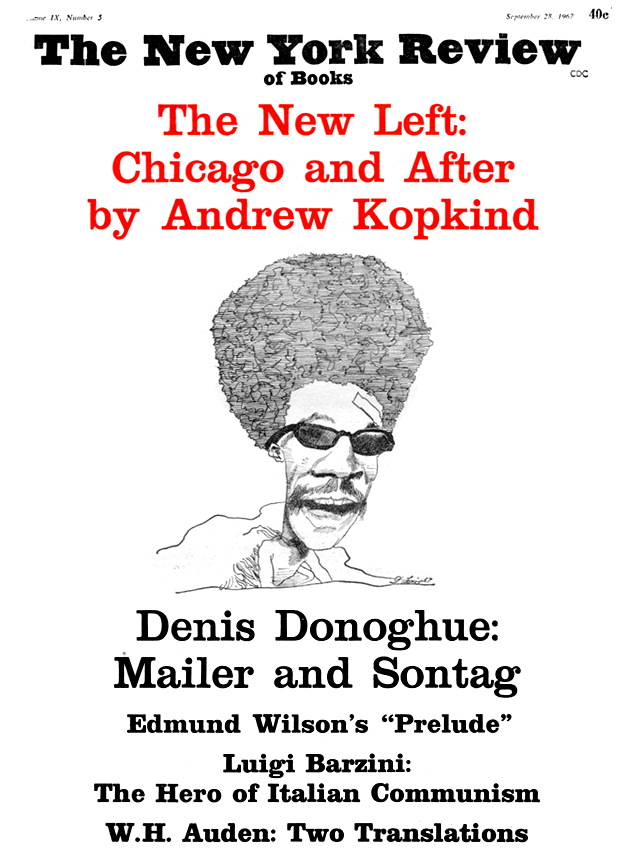 Do Israel’s Arabs Have a Future?

War for Oil? An Exchange

Where Is Israel Going?

Why Israel Should Settle Now

Israel and the Palestinians: An Exchange

An Exchange on Zionism