Letter from Greece from the November 9, 1967 issue

Labeling the colonels as simple fascists may not be very helpful, but I don’t see how it is inaccurate, assuming that a “simple fascist” does exist…. Greece is being treated as a special case by Mr. Steel. It was as much a “model democracy” as any other country, with all the ambiguity implied in that concept; and the colonels can be called “simple fascists.” Condemnation of large landowners and even, in Hitler’s case, friendship with Communists are certainly not foreign to fascists when they are starting out and forced to win some base of support. Weakness in ideology, aside from a super-nationalism, is also a companion of fascism. In the name of this weak ideology of patriotism, a great deal of harm has and continues to be done. Though I may be termed a “wellwishing liberal” I prefer a dictatorship with a strong ideology, which gives it a reason for existence and provides a standard against which it may be measured.

The rest of the article seems a fair enough assessment. Perhaps in an effort not to label the colonels unfairly and write them off emotionally, Ronald Steel has ended up protesting too much.

When I went to Greece (not at the expense of the NYR, as erroneously reported by Time, but on my own), I expected to find a nasty, repressive military dictatorship, and I did. I also expected to find a people seething with revolt and eager for the return of the deposed politicians. But I did not find that. Rather, I found a widespread feeling of acquiesence that seemed to extend throughout the population, and which was admitted to me, with regret, even by the left-wing politicians with whom I spoke. There was far more disillusionment with the political parties than I had been led to believe by reading, like my critics, American journals of the Left, and a greater willingness by average Greeks to give the colonels a chance to restore stability to a badly misgoverned nation. The situation in Greece shortly after the colonels’ coup seemed to me, in short, rather similar to that in France after De Gaulle came to power. Without trying to put the General and the colonels in the same boat, one could detect the same underlying disillusionment by average people in parliament and the politicians, the same willingness to accept a deux ex machina who would set things in order and then presumably depart from the scene. Indeed, there seemed to be even a similar kind of hysterical reaction among many American liberals, who readily labeled De Gaulle a “fascist” in 1958, without bothering to examine his methods, his objectives, or the situation that brought him to power. For observing that the situation in Greece was more complex and ambiguous than I had been led to believe, that the colonels were not universally condemned as “fascists,” “war mongers,” and paid agents of the CIA, I find myself accused of being an apologist for a regime I find as lamentable as do my critics. Rather than trying to match indignations, I shall try to touch upon some of the less emotional criticisms of my report on Greece.

(1) I’m afraid I do not see the relevance of Mr. Gutenschwager’s observation that the 53 percent majority polled by the Center Union in the 1964 elections means there is no sympathy among ordinary Greeks for the present regime. Lyndon Johnson received a good deal more than 53 percent of the popular vote in our 1964 elections. Does that mean there would be no sympathy (particularly among those who voted for him) for a replacement? As for tourism, Mr. Gutenschwager is wrong. While receipts did fall off in early summer (largely as a result of the Middle East crisis), they later picked up, and for the year there has been a net gain over 1966. Whether or not the junta is able to achieve the economic reforms it seeks remains to be seen. But the fact that it is authoritarian, or has dismissed some of the professional elite, does not in itself mean it is incapable of pursuing industrial development. Dictatorships, unfortunately, are sometimes more efficient than democracies in this respect. While Mr. Gutenschwager is correct in pointing out that royal interventions contributed to the political instability that exasperated the Greek populace, and while many of the deposed politicians are no doubt worthy and noble men, this does not change the fact—upon which most observers agree—that the Greek people were deeply disillusioned with the antics of the parliamentarians (and not only those on the Right) when the coup occurred. Finally, I fail to grasp Mr. Gutenschwager’s innuendo about the “turnabout in Greek foreign policy in relation to the Jews and Arabs” as an example of American control of the regime. If this were the case, one would expect the colonels to favor the Jews, when, on the contrary, they condemned the “imperialists” and sided with the Arabs.

(2) I suspect that Professors Theoharis and Feinstein might find the differences within the junta less important today, now that Colonel Papadopoulos has fully emerged from behind the scenes, than they did when they wrote their letter. Also, I’m afraid they overemphasize both the importance and the extent of European opposition to the Greek regime. Except for the Scandinavians, protest has been largely perfunctory, and confined to verbal denunciations. If the European governments really did take their “one Europe” slogans seriously and showed some serious concern about what is happening in Greece, perhaps they might be able to put some pressure on Washington—or even on the junta itself. While I would like to believe that such easy gestures as discouraging tourism, trade, and military aid would “guarantee a return to Democracy in Greece,” it is unlikely to be that simple. We tried it in Haiti without dislodging “Papa Doc” or improving the lot of his unhappy subjects. The power of the US government to change the policies of authoritarian regimes is not so great as liberals (or conservatives) apparently imagine.

(3) Miss Plesofsky’s comments are well taken, but I do not know what kind of answer she seeks. If I seemed ready to “give the colonels a chance,” I was simply trying not to prejudge the situation with predictable liberal indignations. I certainly do not object to the protests of individuals or of governments against the regime. It is simply that I suspect that such protests as the refusal of liberals to visit Greece, or even the total suspension of US military aid, will have little effect on the regime’s longevity. If pressure is carried to the point of open intervention, it could “backfire” by allowing the regime to appeal to Greek nationalism—a powerful force which should not be under-estimated. If Miss Plesofsky finds such labels as “simple fascists” helpful, she is welcome to them. My feeling is that the regime is, so far at least, simply military-authoritarian on the Latin American pattern, and without either the ideology of the mass movements that marked Italian and German fascism. 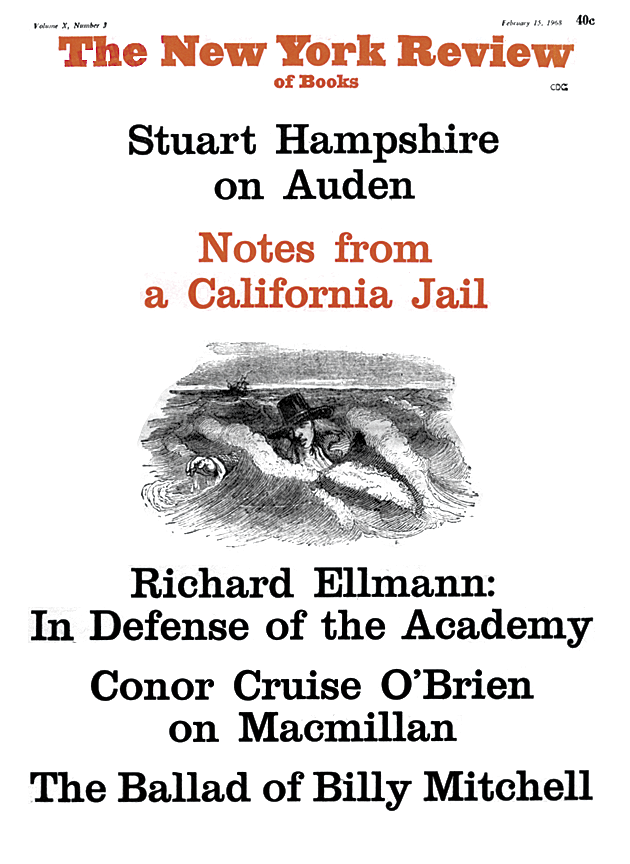 The Case for the Colonels

The Grab for Greece