Beginnings are always the best of times. Looking back now at the past eight years one realizes that what sometimes appeared to be apocalyptic vision was, in fact, an extraordinary optimism, an uncommon belief in the possibility of radical enlightened change—if not immediately in our institutions, then certainly in the people; a kind of neo-populist faith first in the blacks and then in the young as the instruments of purification, the trustees of a new morality. It is painful to recall that, only last spring, some of us were inordinately dismayed at the prospect of being forced to settle for Robert Kennedy as President rather than McCarthy. How ingenuous that dismay seems now. It appeared, then, that the years of direct action had paid off; that the peace marchers, the demonstrators, the black liberation movement, the draft resisters had caused a government to fall. It was a time in which anything could happen. It now looks as if everything will.

This is, I suppose, a way of saying that last spring, one might have thought differently about Woody Guthrie and Joan Baez. Both folk musicians and radicals, they seemed each to exemplify the dominant idealistic values of their respective generations as well as to demonstrate the gulf between them.

Guthrie’s document of his life and thought in the rough hard-times America between two world wars was first published in 1943 when he was just past thirty. He grew up in an Oklahoma town where the townsmen would, for their amusement, arrange savage fights between unwilling school-boys, where his father did business with his fists, and where, on election days, Guthrie “used to follow the different speakers around and see who got beat up for voting for who.” Disasters, natural, economic, and personal, were frequent—yet he wrote about his youth with remarkable ebullience. A passage describes his father, moments before a cyclone destroyed their house, shouting at the storm:

“…Let the old wind go crazy and pound us over the head! And when the straight winds pass over and the twisting winds crawl in the air like a rattlesnake in boiling water, let’s you and me holler back at it and laugh it back to where it came from!…”

This resilience we once thought of as peculiarly American was a vital element in the movement to revolutionize the country in those years when America was still a metaphor for youth. However, it is also easy enough to find in Guthrie’s writing the characteristic mythologies and evasions of those of the 1930s Left who believed with Guthrie that Joe Stalin loved the songs of Robert Burns. The unshakable conviction that trade unionism was the way to world peace and universal brotherhood, the faith in powerful central government, the selective morality and on-again-off-again pacifism, the beatification of the “common man”—all ended in a kind of splendid contradiction. What is Bound for Glory, in Guthrie’s book, is a freight train carrying a euphoric group of the unemployed to jobs in defense plants because World War II has just been declared. Guthrie strums his guitar and composes:

It completes a depressingly neat cycle that, these days, one of Guthrie’s heirs, Phil Ochs, sings “I Ain’t a Marchin’ Any More,” which contains the lines:

WOODY GUTHRIE composed hundreds of songs; about unions, dams, outlaws, dust storms, the oppressed, and about America, which he ferociously loved. He writes of how he began:

And there on the Texas plains right in the dead center of the dust bowl, with the oil boom over and the wheat blowed out and the hard-working people just stumbling about, bothered with mortgages, debts, bills, sickness, worries of every blowing kind, I seen there was plenty to make up songs about…. I never did make up many songs about the cow trails or the moon skipping through the sky, but at first it was funny songs of what’s all wrong, and how it turned out good or bad. Then I got a little braver and made up songs telling what I thought was wrong and how to make it right, songs that said what everybody in that country was thinking.

And this has held me ever since.

Guthrie printed on his guitar THIS MACHINE KILLS FASCISTS—but it was the war with the fascists, or at least its cold war aftermath, that shut off the music. By the early Fifties, Guthrie’s brand of people’s folk music was blacklisted almost everywhere. With the exception of “This Land Is Your Land,” which, divorced from its original political context, had become almost an auxiliary national anthem, his songs were heard in few places outside the summer camps and progressive schools attended by the children of the affluent Old Left. Guthrie himself was silenced, immobilized by a degenerative disease of the nervous system which ended all comment from him, musical or political.

Still Guthrie’s was the kind of life Bob Dylan dreamed of: leaving home for hard traveling, on the road with migrant workers and hobos, singing for nickels and dimes in boom towns, hunting odd jobs in towns that had gone dry, and always putting his songs to work, in railroad jungles, in Hoovervilles, on picket lines. It was a brawling, stripped-down, engagé existence, having, for the young folk singers growing up at the end of the Fifties, the romance that hangs about old barricades when it seems they will never be manned again.

Songs of social content crept slowly back; at first through the old hymns, given fresh meaning by the civil rights battles, and then into the new popular music. The new musician-activists arrived quietly. They came, after all, in good times, from good homes. Guthrie’s childhood had been tormented. By contrast, Joan Baez’s was idyllic. Her mother was understanding, supportive. Her father was a physicist who refused to take jobs “that had anything to do with armaments, offense, defense, or whatever they call it.” “Once when I was thirteen,” she writes in her autobiography, “he asked me if I would accept a large sum of money for the death of a man who was going to die anyway…. I told him sure I’d take the money, and he laughed his head off. ‘That’s immoral’ he said.”

THE REASONABLE FASHION in which many of the young had been reared was apparent in their manner. They were given to believe that if you said something long enough and if it were also true you would be heard and action would be taken. The problem was only one of making people understand. Even the protest songs that Baez first scattered among the traditional ballads were polite songs—“Where Have All the Flowers Gone?,” “What Have They Done to the Rain?” She was an agreeable child asking the grownups if perhaps something couldn’t be done before we all ended up dead. In the early Sixties the young were not asking for much. While it was becoming clear to them that the foundations of our establishments were not built on granite, it had not yet been widely accepted that the constructions were actually on slime.

It was still possible for the middleaged to feel morally impeccable as they watched, on television, mothers marching against fallout in the milk, or black students practicing non-violent techniques as fellow CORE members pummeled and vilified them in preparation for sit-ins in the South. Easy, too, to applaud Dylan’s “Masters of War,” with its abstract accusation against some unnamed ancient imperialists:

The young radicals were morally so clean, so free of the old manipulative techniques and the search for power, so alien to cant. All they wanted was a decent life for other people so that they themselves could be left alone. But the war, of course, and the failure of the civil rights movement made this impossible. Baez became a national figure—withholding war taxes, being taken to jail from induction centers, encouraging draft resisters, always upholding non-violence, which, she says, is only “organized love.” Writing of Ira Sandperl, with whom she runs the Institute for Non-Violence in Carmel, she expresses what seemed the essential spirit of the movement:

…the only truth he really knew was that no one knew the Truth, and therefore no one had a right to take another man’s life for his idea of Truth.

Her concerns were “how to create an atmosphere for change…how to be decent…,” and she wondered whether it was right for her to be having such a good life while terrible things were going on outside. Baez’s remarkably pure voice seemed to stand for the integrity of her generation. She was brave and true and kind, the 1960s rebel girl. The songs she—and, more often, the others—sang, the pop, rock, and folk songs of the new morality, got into the heads of the young across the country the way the Lone Ranger Theme had gotten into ours. For the children of policemen and plumbers and submarine commanders, as well as those of professors and psychiatrists, the music was creating a new awareness, a revolution in consciousness, a sense of community. But that was last year.

Daybreak is something of a souvenir of those more hopeful days; notes from the journal of a nice girl whose songs and sensibilities are perhaps as irrelevant to the new turn of attitudes and events as Guthrie’s. This is this year. Fragmentation is the word. After Chicago, the ideas ran out—and now the call is out for more Chicagos. The oppressed stalk the police, and the populist activity is happening on the Right. One begins to talk of fascists again, to speak—half-seriously—of leaving. The young have become old overnight. Which guitar kills fascists? 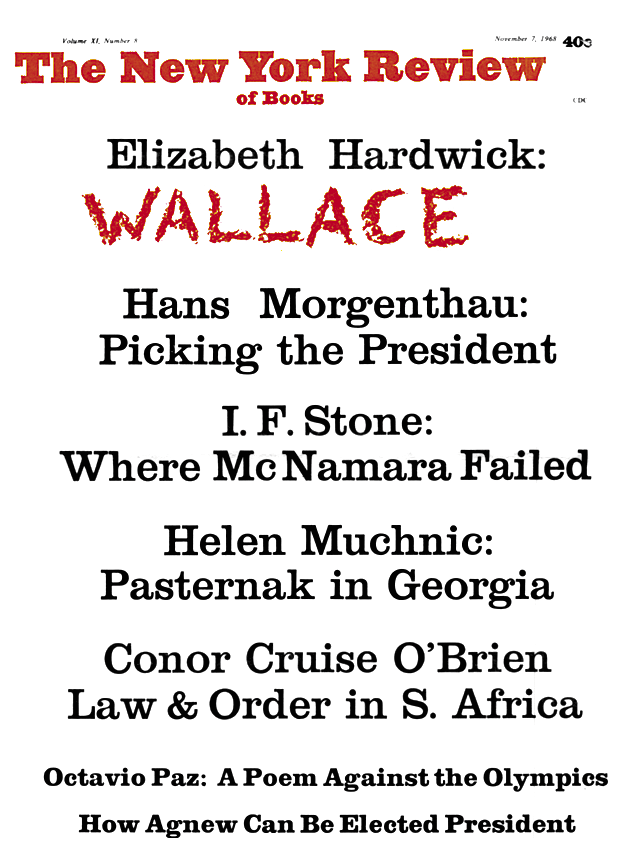 In Defense of Misery

In Defense of Misery