DEAR PHILIP. “Thank God for boozy godfathers”
you wrote in our guest-book, which was flattering:
though I’ve reached the years when discretion
calls for a yearly medical check-up,

who am I to avouch for a Christian
baby, far less offer ghostly platitudes
to a young man? In yester times it
was different: the old could be helpful

when they could nicely envisage the future
as a nameable settled landscape their children
would make the same sense of as they did,
laughing and weeping at the same stories.

Then sheep and goats were easy to recognize,
local fauna: good meant Giles the shoemaker
taking care of the village ninny,
evil Count ffoulkes who in his tall donjon

indulged in sinister eccentricities.
But I speak from experience, how could I
say that to you, who can’t remember
when everyone travelled by railway

and the poor were, what they were used to being,
the creators of wealth not, as now they are,
an expensive nuisance. (Nobody
has dared suggest gassing them, but someone

surely will.) You don’t need me to tell you what’s
going on: the ochlocratic media,
joint with under-the-dryer gossip,
process and vent without intermission

all to-day’s ugly secrets. Imageable
no longer, a featureless anonymous
threat from behind, to-morrow has us
gallowed shitless: if what is to happen

occurs according to what Thucydides
defined as ‘human’ we’ve had it, are in for
a disaster that no four-letter
words will tardy. I’ve beheld in nightmares

Herod’s genetic engineers commanded
to modify the Innocents. By then, with
any luck, the tangible Me should
be mineral, too set in my habits

to distinguish light from darkness and valued,
in current prices, at three-dollars-fifty:
but you could well be there if what is
ripely is not promptly done. Yet, who can

issue proper instructions? Not, certainly,
our global archons, whose toplofty slogans
are as off the mark as their syntax
is vague: (they would be figures of fun, if

very clever little boys had not found it
amusing to build devices for them, more
apt at disassembly than any
old fire-spewing theogonic monster.)

To be responsible for the happiness
of the universe is not a sinecure:
in elite lands your generation
may be called to opt for a discipline

that outpeers the monks, a way of obedience,
poverty and—good grief!—perhaps chastity,
but in this world’s ill-weathered open,
a fresh venture prefigured in folk-tales

as the Quest Perilous. For such wayfarers
what should we write to provide the nourishment
warmth and shelter they’ll be in need of?
Nothing obscene or unpleasant: only

the unscarred overfed enjoy Calvary
as a verbal event. Nor satiric: no
scorn will ashame the Adversary.
Nor shoddily made: to give a stunning

display of concinnity and elegance
is the least we can do, and its dominant
mood should be that of a Carnival.
Let us hymn the small but journal wonders

of nature and families, and then finish
on a serio-comic note with legends
of ultimate eucatastrophe,
regeneration beyond the waters.

But perhaps you think poems are as foolish
as most poets, and would rather spend your spare
moments romping around in Cantor’s
logical paradise or beseeching

such knotty points as Can we hang a robber
who is not there? or What is the color of the
number Three? Why not? All pleasures
come from God. Since I am your godfather,

let me close this letter with some worldly maxims:
be glad your being is unnecessary,
then, turn your toes out as you walk, dear,
and remember who you are, a Spender. 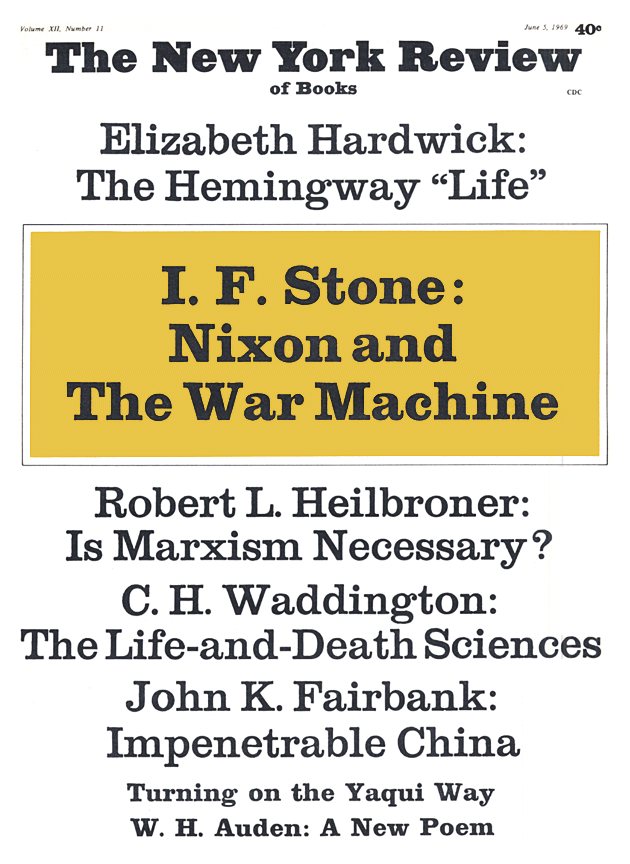 W.H. Auden (1907–1973) was an English poet, playwright, and essayist who lived and worked in the United States for much of the second half of his life. His work, from his early strictly metered verse, and plays written in collaboration with Christopher Isherwood, to his later dense poems and penetrating essays, represents one of the major achievements of twentieth-century literature.

Part of a Letter, to Young Codignola

Folly on Royal Street before the Raw Face of God

The Enemies of God