In the issue of August 13, 1970, Mr. Holt refers to the hyperkinetic impulsive disorder as a “currently fashionable quackery” and he misleads the lay reader by citing only those clinical characteristics observable at school in children suffering from this disorder, thus leaving the impression that the disorder is reducible to that of misbehaving in the classroom. As a physician, I want your readers to know that actually, the hyperkinetic impulse disorder (“a complex and little understood disorder” like headache, muscular dystrophy, cancer and many another illness) is characterized first by great difficulty in controlling motor behavior and, secondarily, by various personality disorders. Often it is the child’s mother who seeks medical help for her child because she notices that his overactivity keeps him from sitting through a meal, prevents him from playing ball with other children because he can’t stay at his assigned position, etc., and in addition, that he has great difficulty responding to his environment appropriately because of his unusually short attention span and/or too ready distractability. Frequently, such suffering children are very impulsive and unable to delay gratification.

This clinical picture emerges early in life, sometimes even at birth. In the latter case, the mother is faced with the problem of satisfying a newborn infant who spits, sleeps little and cries often; once the baby is out of the crib and able to get about, he fingers and usually destroys objects he can lay hands on, far more than the normally curious baby. This behavior widens as time passes, and extends to territories away from home and, of course, eventually to school. One can easily understand that soon a vicious circle is created: the child’s abnormal motor behavior leads to clashes with parents, teachers, and other authorities, which in turn result in further painful emotional and personality complications. Thus, learning problems are common, a consequence both of impaired attention and concentration spans, and as a reaction to a hostile and perplexing environment.

Clinically, amphetamines produce a specific effect in these children, namely, that of reducing motor overactivity. Startling perhaps to the layman is that the same drug administered to a normal child is a stimulant, but in these afflicted children the effect is not to dope them but, contrary to Mr. Holt’s assertion, to normalize their motor activity. Mr. Holt seems surprised that this disorder is more prevalent among boys. It is indeed unknown to us why this is so, but he may also be interested in knowing that most neurological illnesses and birth defects are more frequent in males than in females, in the same way that, for example, gall bladder illness is more frequent in females than males.

Mr. Holt thus fails to distinguish between overactivity due to minimal brain dysfunction (hyperkinetic impulse disorder) and that due to environmental causes only. He classes them together, falsely concluding that the real cause of these children’s behavior has to do with different degrees of arbitrariness and/or oppression in the school system. He certainly may be right in asserting that oppressive curbing is the main cause of much rebellious and/or nonconformist behavior, but not in the case of the hyperkinetic impulse disorder. A distinction must be made between nonconforming behavior due to unreasonable curbing and/or home difficulties and the hyperkinetic impulse disorder. Psychiatrists are aware of this distinction and although abuses and errors may exist, it is inaccurate to charge psychology with quackery because it treats this specific and identifiable disorder with drugs.

Mr. Holt inquires “whether other countries have also noticed this strange ‘disorder’.” Clearly yes, since in fact, England, Czechoslovakia, Yugoslavia, India, and several Latin American countries report an incidence of this disorder similar to the rate found in this country.

Later in his letter he accuses psychiatrists of assuming that “he [the child] is so incurably bad that only a powerful pill can make him good.” This is not our assumption at all. Amphetamines only modify their motor overactivity, in this specific instance.

Counseling and psychotherapy to promote necessary changes in parents, school staff, and the child himself are essential because of the emotional complications that occur in the hyperkinetic child interacting with his environment as I mentioned before.

I greatly admire Mr. Holt’s criticisms of our school system and agree with him, but I think his accusation of quackery in the psychiatric diagnosis and treatment of hyperkinetic children is absolutely unfounded.

Thank you for inviting me to respond to Dr. Carrillo’s letter. In one respect he is quite right: anxious parents are often just as ready as schools to have children “diagnosed” as “hyperactive,” “brain-injured,” etc., and treated with strong drugs. Indeed, I have made clear elsewhere that the destruction of mind and character that takes place in so many schools is often well begun even before the child gets to first grade.

Of my other questions or points, Dr. Carrillo has answered one, misstated one, and largely evaded the most important one of all. It is interesting (though by no means convincing) to hear that a few other countries report a rate of “this disorder” similar to ours, though so few children in India and Latin America ever see doctors that their statistics cannot be worth much.

Though I see my words could be taken that way, I did not mean to say or imply that psychiatrists would think or say that a child was so bad that only a powerful pill could make him good, but only that this is what the child himself would take their words and acts to mean, just as children in slow sections in school, however labeled, say that they are in the “dumb” section or the “stupid” section. And I ask, now as then, what must the effect be on a child of feeling that he is this bad.

To my question about why should a brain injury incurred at birth be found widely but uniquely in boys, Dr. Carrillo admits he has no answer. He says that other similar defects are also found mostly in boys. Immaterial: my question applies equally to these. He then says that gall bladder illnesses are more common in females than males. Immaterial and irrelevant; no one claims that gall bladder illnesses are caused by birth defects.

His failure to answer my question is not a light matter. The concept of “hyperkinesis” or “brain injury” is a hypothesis, an inference, as Einstein put it, a “construct,” and it is the first duty of those making such a hypothesis to provide some answer to such critical questions. Without such an answer, the hypothesis must fail.

The bulk of Dr. Carrillo’s letter I must call an argumentum ad authoritatem—the expert defending his ideas by saying that he is, after all, an expert. “As a physician, I want your readers to know….” How do we know “hyperactivity” exists? Because he says that it does. What I know is that doctors, like other experts, have been and are often wrong, and that we have a right to examine critically what they say. When we do so here, we see, first, that Dr. Carrillo does not distinguish between what he and someone else observes, and secondly, that he does not distinguish between what he observes and what he infers. To this I would add that the inference itself, that a certain collection of symptoms is “caused” by some physical aberration in the child’s brain, is extraordinarily weak and shaky.

Please read carefully the first paragraph of his letter. What is the life behind the words? What is actually happening? A mother brings a child to a doctor and says, “Doctor, my child is doing this or that, he won’t sit still at meals, he fights with the other children, he doesn’t pay any attention to me when I talk, etc., etc.” Does the doctor himself observe any of this behavior? He does not. Does he have any reason to believe or way of finding out that the mother is a reliable observer, that what she reports actually does happen? He does not. Does he have any way of knowing the history of the child and the mother, whether there is anything in her way of dealing with the child that might cause the child’s behavior? He does not. Does he hear the child’s side of the story? He does not. Does he fulfill his minimum responsibility as a physician by giving the child a thorough enough physical examination to be reasonably sure that there is not some other somatic cause for the child’s behavior—bad hearing or sight, other body malfunctions, muscular or nervous injury, tension, or pain, hypoglycemia, protein or vitamin deficiency, allergies, glandular disturbances? In the cases I have heard of, he does not. Does he test in any way the hypothesis that it might be something other than brain damage in the child that is causing the mother to describe him as she does. For the most part, he does not.

Later he says that the amphetamines reduce “motor overactivity” (italics mine), that they “normalize their motor activity.” More hidden inferences. When, where, how, and by whom was it established what is “normal” activity? How in fact do we measure activity? Is there an instrument like a thermometer or sphygmomanometer (blood pressure) with which we can measure it? There is not. In practice, the test and measure is this: that activity is “abnormal” that bothers or worries or irritates or angers some adult in charge of the child.

As for the fact that amphetamines affect differently “normal” children and “hyperactive” ones, there may be a simpler, and therefore better, explanation. The drug may be both a stimulant and a tranquilizer, making the relatively relaxed or fearless child more energetic and the tense and frightened child less nervous. An even more common and widely used drug, alcohol, though perhaps working in different ways, has much the same effect. It “picks us up” and “settles us down.” We do not need to conjure up mysterious ailments to explain it. And by the way, has anyone thought of giving “hyperactive” children a tranquilizer, or even a little sip of alcohol, to see how that affects their “overactivity”; and if not, why not?

I regret that there is not space here to examine, to use Laing’s phrase, the politics of hyperactivity—in whose interest is it to diagnose and treat children this way? Who gains, and what? Meanwhile, I hope that what I have said will cause some readers, at least, to doubt that the issue is as simple as the experts would have us believe, or the remedy a pill. 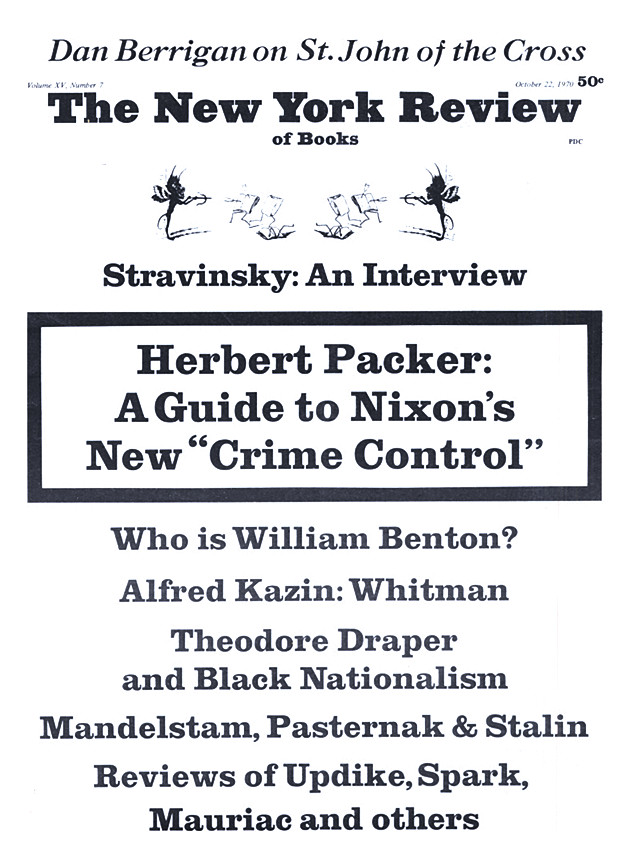 Picture of a Negro Child with a White Doll

The Politics of Middle Class Children