Nancy: The Life of Lady Astor

Christopher Sykes is one of the best biographers in the business in England today, and in tackling Lady Astor he certainly needs to be, if only to justify his opening statement that in her day she was one of the five or six most famous women in the world. The contention is dubious if by famous is meant the number of inches of newsprint published about her doings and utterances: already by her time the movie stars and celebrities were pushing titled Americans off the front page. It is out of the question if by famous is meant the quality which makes a person’s memory glow for generations to come. If history has a scrap album, she would certainly feature in one of the photos, but her achievements do not earn her a footnote in the text. Strength of personality is not itself sufficient to earn a mention unless it is concentrated remorselessly toward achieving some objective.

Lady Astor’s sole claim to that kind of fame was the distinction of being the first woman ever to be elected to Parliament. But her election was not the climax to work in the suffragette movement or among Blue Books. Succeeding to his father’s peerage, her husband had to leave the House of Commons, and she stepped into his shoes in the immediate postwar general election as a coalition candidate. A passionate opponent of drink, she got through a Private Member’s Bill in the early Twenties prohibiting pubs from selling liquor to anyone under the age of eighteen. The rest of her political career was sparklers rather than fireworks.

She may be all the more sympathetic for lacking real political ambition, and Mr. Sykes even spends a chapter denying that the Cliveden set, of which she was supposed to be the animator, existed. None of this substantiates her claim to fame. She was, of course, a redoubtable political hostess but not as influential as Lady Londonderry. Nor was she the mistress of a salon, like Lady Cunard or Lady Colefax. If one looks for a counterpart in the England of her times, the nearest perhaps is Margot Asquith, who had the same unbridled tongue and unpredictable reactions. But Nancy Astor would not have qualified for the Souls.

She had, however, one distinction which in Edwardian society was important. She was American. American women entranced the Edwardians by their directness, humor, gaiety, desire to please, and disregard of asphyxiating social conventions. By comparison most English girls were stupid, bored, snobbish, and staid. Nancy Astor possessed astonishing vitality. She could turn any party into a success just as late in life she could bring to life the bomb-numbed inhabitants of an air raid shelter in Plymouth by turning cartwheels. She was a master of the crack, the retort, the interjection, not exactly witty but often deflating, and her reputation for electioneering was unassailable. Her family might have been ruined in the Civil War, but as a Virginian she thought herself second to none and never made the mistake of licking the boots of the English aristocracy. She could talk to people—of any class.

It did not even matter that she had been divorced. She had bolted from her New England husband on the second night of her honeymoon and eventually his parents begged her to divorce him since during their bouts of separation he had committed bigamy and had plunged for the bottle. In England peers proposed in profusion, but she married the heir of an American multimillionaire who had become a naturalized Englishman.

Waldorf Astor was not only good-looking, he was a man of dignity and liberal spirit who was nearly always able to master her and win her respect. He was in fact the more unconventional of the two politically and the sort of Tory who keeps that party in power by curbing the reactionaries within it. Mr. Sykes remarks that Nancy Astor lacked the capacity for love but had great talent for friendship. There is no doubt that she could win hearts, whether among the aristocracy, or the literary world, or her fellow women MPs, or among poor people whom she met and helped. But the vitality and manner were only aspects of what mattered most to her: the exercise of will.

She was a character straight from the pages of Shaw, Conrad, or Forster. What mattered was that she should get her own way, contradict anyone with whom she disagreed, and express her own will. Nothing pleased her more than a good feud. She sailed full steam ahead, all turrets firing. She got hit in return, but never sank, and she would emerge even when she was manifestly in the wrong, sailing serenely, perhaps now on a different tack, but indifferent to her opponents. The course on which she sailed hardly mattered: all she cared about was that she was under full sail. Naturally she had causes: temperance and Christian Science were the most important. Even more naturally she had prejudices, Latin European countries and Roman Catholicism among them. Anglo-Saxon supremacy for her was an axiom. But the causes and prejudices were instinctive. She could not reason: the intellect was a world closed to her.

Small children adored her, but once they became adolescents she sensed their growing wills and saw in them a challenge to her own. Her rudeness was legendary—though perhaps one should recollect that among her set in pre-1914 England it was considered smart to be rude. She reveled in being a holy terror and it was not an accident that her best publicized friendship was that with Bernard Shaw, whose views in old age on foreign politics were more absurd than her own. Yet it was not Shaw but Philip Kerr, later Lord Lothian, who was her spiritual director.

Kerr had been a member of Milner’s kindergarten after the Boer War, a group of young men who thought the world of themselves and never achieved the positions that they thought were due to them later in life, sedulously though they spent their time acquiring influence. The theory was that the world is ruled by a few men of power and to catch their ears is the surest way to mold events. But Philip Kerr had a special hold upon Nancy Astor. He was an ardent Christian Scientist.

Christian Science is a religion for optimists. When her son by her first marriage, Bobbie Shaw, was put on trial for a homosexual offense, Kerr wrote,

I’ve no doubt that the right thing is for Bobbie to face the music—which I think means a period of gaol. It is exactly what we have all known he needs—a period when he will be kept from idleness and false pleasures. From the Science point of view…you can rejoice in it. There is no reason why what mortal mind will claim to be grief, shame, outraged pride should touch you or Waldorf at all…. It can only work out for the greater good of everybody, Bobbie, yourself, W and the family and Science itself.

It was this same case-hardened self-satisfaction and refusal to believe that evil existed that was to make Nancy Astor such an indignant and trenchant supporter of Chamberlain in the days of appeasement. Mr. Sykes is right to emphasize that unlike some appeasers she was never soft on Hitler or the Nazi movement. But she became gripped by an invincible conviction that there was going to be no war and that anyone who doubted this or Chamberlain’s policy should be put down. When Churchill rose to deliver his memorable speech on Munich, she tried to put him down.

She liked putting people down and didn’t mind greatly the attacks on herself because she was armored by her religious conviction that she lived in a world of error. She never forgave her family for forcing her to resign her seat in Parliament at the end of the war when she had lost the power of making a coherent speech. She was exceptionally lucky to have such affectionate sons who all took hard knocks from her. Mr. Sykes judges that she had a strong streak of cruelty in her and a possessiveness that nearly estranged her children and made her jealous whenever one of her friends married.

Although many acts of kindness and friendship are recorded in this biography, Nancy Astor remains for those who did not know her an unlikable figure; and Mr. Sykes wisely does not try to force his readers by exculpation or explanation to change their opinion. The story is without pattern: an episodic life. Mr. Sykes denies that she was typical of anything, but also maintains that she was more than only a bird in a gilded cage. This is indeed the contradiction in the book. For in fact Nancy Astor was a typical member, in all her individuality, of the ruling class in an age when all the great capitalist countries lost their way. They were rotted by unemployment which the rulers could not control, numbed by the fear of communism, and hypnotized like rabbits by the stoat of fascism.

But as the biographers perform their duty and reveal how well-meaning and benevolent Bonar Law, Baldwin, Macdonald, Chamberlain, Lansbury, and Attlee were, it seems incredible that anyone should have conceived the interwar years to be a period of decline, still less of shame. Whatever may have gone wrong seems to have been someone else’s fault or beyond human control. Are historians wrong, then, in diagnosing this period as one in which politicians displayed a quite exceptional failure of nerve—a failure to grasp what in fact was happening to society and to show the imagination and flair needed to evolve new methods of coping with its problems?

They are not, I believe, wrong; and the flaw in Mr. Sykes’s workmanlike, sagacious, and worldly-wise biography is simply that he makes no attempt to set Lady Astor against her age. Had he done so she would have appeared more like a bird of paradise of dazzling plumage uttering strange cries beside an exotic sea in some southern coral island removed from the bustle and anxieties of the world in which she lived. Whether such creatures as she, or the odious demagogue Horatio Bottomley, who attempted to persecute her when she entered Parliament, should be legislators in parliamentary democracies has troubled some of the keenest critics of our political system, among them Nancy Astor’s friend, Bernard Shaw, in the Apple Cart; and it was indeed just such a reflection that inspired the conclusions of Plato’s Republic. But even if one does not subscribe to such a gloomy analysis of political representation, it is difficult not to see even in someone so idiosyncratic as Nancy Astor, with all her vitality and virtues, the pattern of something deplorable in the structure of politics and society in her times. 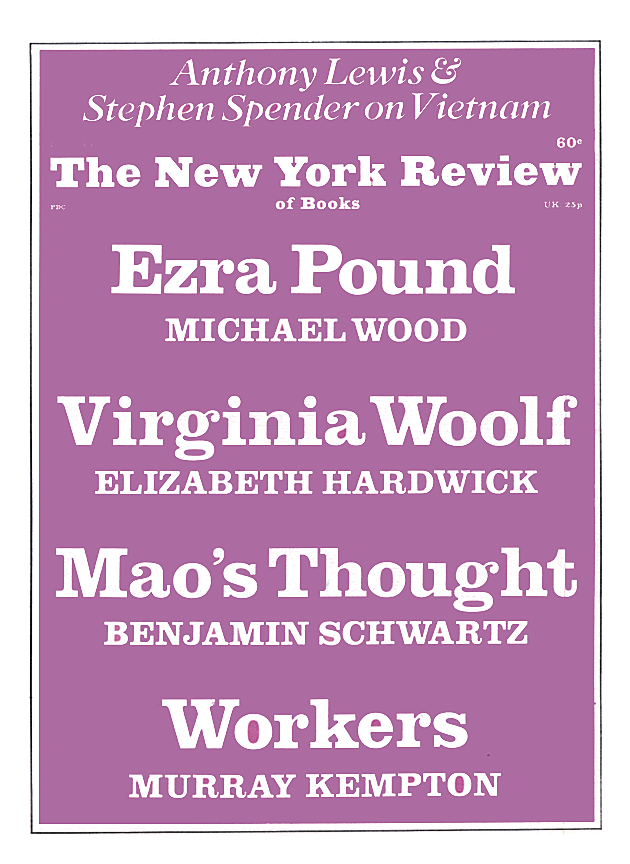 The Camel at the Door

Dean of the Cold War

The Camel at the Door

Dean of the Cold War

Noel Annan (1916–2000) was a British military intelligence officer and scholar of European history. His works include Leslie Stephen and Our Age, Changing Enemies: The Defeat and Regeneration of Germany, and The Curious Strength of Positivism in English Political Thought.