The fortieth anniversary of Hitler’s so-called “seizure of power” was greeted by the appearance of a spate of popular biographies, of which the more important were Colin Cross’s Adolf Hitler (Berkley, 1973), Robert Payne’s The Life and Death of Adolf Hitler (Praeger, 1973), and Joachim C. Fest’s Hitler (Harcourt Brace Jovanovich, 1974). Fest’s book was discussed at length by Neal Ascherson in The New York Review on April 18, 1974. In spite of Ascherson’s reservations, it seems to have been accepted as the definitive “life”—in my view, with little justification. Fest’s Hitler may be a journalistic tour de force, but it does not match Alan Bullock’s classic biography and adds nothing substantial to knowledge. All in all, if the sudden spate of new writing proved anything, it was that biography is no answer to so complex a problem as the Nazi revolution.

J. P. Stern’s Hitler: The Führer and the People (University of California Press, to be published in June, 1975) is a very different proposition. Not that Stern ignores or underestimates Hitler the man; but he realizes that the key to understanding lies not in the detail of his personal history, but in the interchange between him and the German people. Hence he is concerned with the ritual and symbolism which Hitler developed, and with his role as “the representative individual.” George L. Mosse pursues similar methods in The Nationalization of the Masses (Fertig, 1975; 252 pp., $14.00), but whereas Mosse follows in detail one particular manifestation—public festivals, national monuments, the aesthetics of politics—Stern seeks to comprehend the whole spectrum of forces in German society upon which, as he sees it, Hitler drew.

Stern’s book is, on all counts, a significant achievement—not so much, perhaps, for its conclusions, which are disputable, as because it opens a road out of the impasse into which biography (both “straight” biography and the currently fashionable psychological variety) had stumbled. The opposite danger, of course, is to ignore Hitler’s personality and to treat him as in some way the logical outcome of German history. This, it hardly needs saying, is not Stern’s position, but it is certainly not far from that of Erich Kahler. Kahler’s posthumous The Germans (edited by Robert and Rita Kimber, Princeton, 1974) is a curiously old-fashioned book, which sets out to explain the German present by the German past. “In Prussia and from Prussia,” Kahler would have us believe, “the Germans learned the selfless devotion to power that the Nazi state would ask of them.” It seems a simplistic explanation of a complex phenomenon.

What we need to know in reality is not the existence of long-standing trends in German history, which may (or may not) have predisposed Germans to throw in their lot with Hitler, but rather the specific motivations of those who joined the Nazi party and helped Hitler to victory. These were examined by Professor Theodore Abel of Columbia University as long ago as 1938 in a book entitled Why Hitler Came to Power. Abel’s collection of material—some 680 biographical statements (of which around one hundred have subsequently been lost)—has now been subjected to meticulous statistical analysis by P.H. Merkl in a forthcoming book, Political Violence Under the Swastika, which will be published by Princeton University Press this summer.

Merkl has divided the witnesses into categories according to age, occupation, class, and other criteria, and the result is to show the tremendous variety of experiences which made a man (or a woman) a Nazi, and to dispel the illusion that the party represented any single social group or stratum. It also shows, not uninterestingly, that anti-Marxism was the primary motive of two-thirds of the early Nazis and that for only one-eight was anti-Semitism “the most salient concern.” Merkl’s analysis may sometimes seem unduly elaborate, but it certainly helps us (as he contends) “to get at the internal dynamics of being a Nazi activist.”

In the end, however, all serious historians know that the only way to understand Hitler is through detailed study of what he did and the machinery through which he did it. Documents on Nazism, 1919-1945, edited by Jeremy Noakes and Geoffrey Pridham (Viking, 1974), is incomparably the most illuminating and informative single volume on this subject. The authors are fully abreast of the most recent research, and their selection of illustrative documents (which includes much material not hitherto readily available) enables them to convey not only “the complexity of political and social reality in Germany during those years” but also “the frequent glaring contrast between idea and reality,” as well as their “more occasional horrifying coincidence.”

Noakes’s and Pridham’s volume, despite its rather awesome length, should quickly supersede other collections of its type, and make it possible for the student to come to grips with the new picture of the Third Reich which has emerged as a result of the intensive research of the past decade. Werner Maser’s compilation of Hitler’s Letters and Notes (Harper and Row, 1974), on the other hand, scarcely lives up to the high claims the author makes on its behalf. According to Maser, it “shows that all of Hitler’s biographers have misinterpreted his political development.” In reality, this pretentious collection of postcards, jottings, even entries in hotel registers—all reproduced in facsimile—offers little that is new and much (such as Hitler’s will and political testament) which had been printed many times before. There are surely more important questions than Hitler’s decision whether or not to become a godfather (p. 115), or his reasons why a German may but a Ford car, “even if he is a Nationalist” (p. 119). Maser’s earlier book, Hitler: Legend, Myth and Reality (Harper and Row, 1973), revealed an unusual lack of ability to distinguish between the trivial and the significant, and the new one is no improvement. 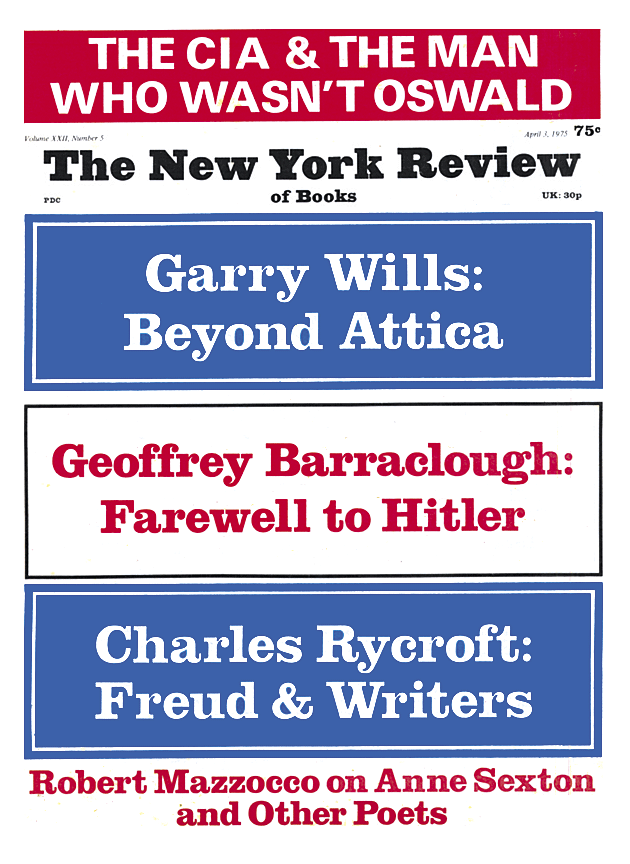