Machines for Sentiment from the February 17, 1977 issue

In your issue of February 17 Garry Wills writes: “John Russell, in his New York Times review of the Greuze exhibit, said it was the high esteem of the Goncourts that made some critics look again at Greuze; which proves Russell had not read the Goncourts….”

It is perfectly true that in L’Art du dixhuitième siècle the Goncourt brothers have some very rough things to say about Greuze. But they also say things about Greuze which would prompt any intelligent young person to look at him closely. After reading for instance the Goncourts’ lengthy account of Greuze’s “Le Père de Famille” (Salon of 1755) we can well believe that the Parisian public “greeted the picture with a kind of ovation.” Anyone who prizes Sebastien Mercier’s “Tableau de Paris” as our best portrait in prose of Paris on the eve of the Revolution will respond to the Goncourts when they tell us how, “like Sebastien Mercier, that painter of written pictures, Greuze sought the subjects of his notes and sketches in the streets, in the suburbs, in the markets, on the quays and wherever people gathered together.” When Greuze took to moralizing, the Goncourts despised him. But when they fixed upon his single figures—“La Philosophe Endormie,” for one—they dwelt on it, touch by touch, with a passionate complicity.

But of course it is not only, or even primarily, to L’Art du dix-huitième siècle, that we must look for conclusive evidence of the Goncourts’ feelings about Greuze. The Goncourts did not button themselves into their footnotes, like today’s provincial drudges. The Goncourts went out and bought what they liked, and they kept it until they died, whereupon the Louvre was in many cases delighted to take it over. This was the case with more than one of their Greuze drawings (That noble late drawing, “The Departure for the Hunt,” which formed no. 112 in the Hartford exhibition, was bought by the Louvre at the Goncourt sale.) As for the “high esteem” which I attributed to the Goncourts in their relation to Greuze, it could hardly be better exemplified than in the passage in “La Maison d’un Artiste” in which Edmond de Goncourt says that “Greuze drew as if driven forward by one single arrowy impulse of inspiration and enthusiasm. There was something positively fevered about his washes, and even when he resorted to cross-hatching he brought to it a headlong momentum which banished any element of the mechanical.” How it is with Wills I cannot say, but that passage seems to me to bespeak an enthusiasm for Greuze.

Any attentive reader of the Goncourts knows, moreover, that Greuze for them was not just a heap of photographs to be shuffled through before the next meeting of the College Art Association. He was a living presence, familiar since first childhood. Their great-aunt, Melanie Tissot, had had drawing lessons from Greuze. He had painted her portrait, and even in 1892 Edmond de Goncourt clearly remembered his first sight of it as a small boy. (She looked, he remembered, like a worldly nun, and Greuze had posed her in front of her harpsichord, with one hand on the keyboard and the other holding an orange with three green leaves still attached to it.) It was, he tells us, “one of the most beautiful Greuzes that I know. It has all the grace of French mastership, and beneath that it has the liquid flow of Rubens’ brushwork.”

So there it is. Only a puny or a misdirected nature would not wish, in this matter, to follow where the Goncourts have led. As to whether Wills has “proven” that “Russell has not read the Goncourts,” I am happy to let your readers decide.

The nervous maneuvers of someone defending his turf—no less honest than most, and a bit more amusing. Take, for instance, that condescending dodge about the Goncourts not buttoning themselves into their footnotes “like today’s provincial drudges.” First, the Goncourts’ major work on the subject, incorporating their important earlier monograph, is dismissed as mere “footnotes”—because it does not “primarily” support Russell’s thesis. Second, odd bits of indirect evidence (a purchase here, reference to a drawing there) are advanced as “conclusive” evidence of high regard. Third, totally irrelevant information about third-person connections is listed (irrelevant unless one is obliged to have high regard for anyone who dealt with his relatives). As I say, no less honest than most such maneuvers. Nor more. The Goncourts set the fashion of damning Greuze with marginal praise that prevailed until the current quickening of interest—yet Russell derives this quickening from the very fashion it challenges.

Certainly Russell has read his Goncourts recently, with selective bias. If he did so earlier, it was with strange blinders on. “High esteem,” from a peripheral quote or two and a purchase against the whole thrust of their monograph? Marx had scattered good things to say about capitalist production; but they do not justify a summary verdict that he held capitalism in high esteem—and certainly not that his esteem is converting others to capitalism in a noticeable way. 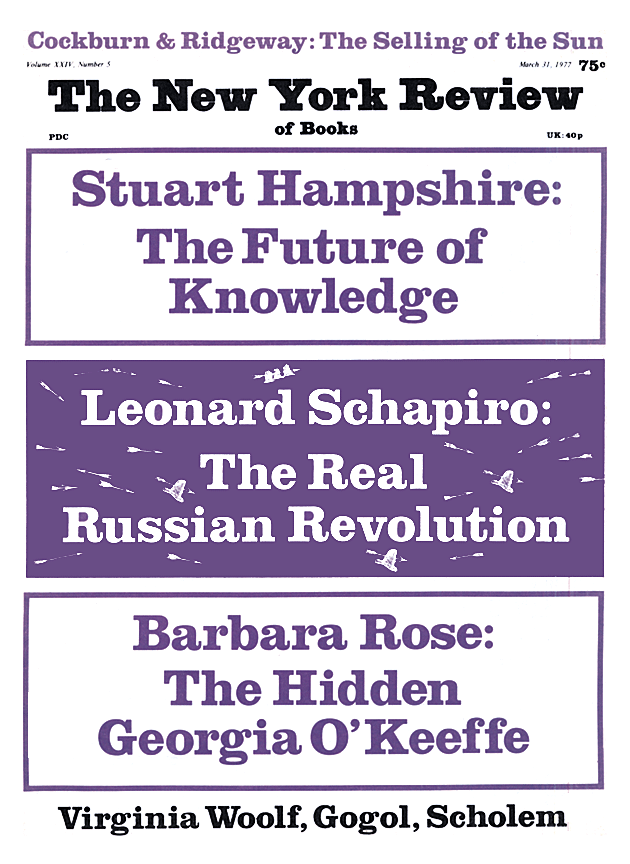 Reading for Signs of Life

Breyten Breytenbach, translated from the Afrikaans by Rita Dove

The Moral Reading of the Constitution

The Passions of Bertrand Russell