Mr. Nicholas Nabokov’s review of the book In the Russian Style (NYR, March 3) struck me, from the beginning, as an evidence that he just simply likes very much to write, preferably at great length and regardless of the importance of matters considered. Hence, the reviewer’s boringly long digression on the history of the Russian expression Razvesistaya kliukva (“a branchy cranberry”), meaning blunders. After having emphasized that the book reviewed is full of such kliukvas, Mr. Nabokov wordily discusses, here and there, the subjects that are not included in the book, like a photograph of a wax figure, a story about an alleged invention of the peignoir in Moscow, Catherine II’s sexual adventures, and many minor points that Mr. Nabokov would like to see in the book.

After such critical observations, in the most authoritative tone, one would expect the reviewer himself quite irreproachable in dealing with substantial Russian topics. But it is not so. Thus, Mr. Nabokov wrongly describes the strel’tsy as a kind of body guard, while this was a general name for regimented servicemen armed with guns; the name originally meant “archers” and was not at all close to “sharpshooters”; some of their regiments were more like “semimilitary formations,” as said in the book, than like Oriental or Byzantine palace guard, as Mr. Nabokov puts it. Then he denies Empress Catherine I’s Lithuanian origin, saying she was a “‘Livonian camp follower,” while it is well known that she had come from a Polish-Lithuanian community and lived in Malbork, far enough from Livonia.

Much more than a large kliukva is Mr. Nabokov’s almost vulgar description of the Empress Catherine II as a “Germanic forerunner of Stalin” (sic!)—because her officers killed the dethroned Peter III, “using a golden tabatière to do so.” Another legend tells that this very snuff-box was used to kill the Emperor Paul, whose son and successor, Alexander I, knew of the conspiracy and, according to Mr. Nabokov’s criteria, should then also be called a “forerunner of Stalin” (as many other Russian and foreign monarchs in similar circumstances).

The reviewer shows an equally whimsical approach in his observations on pictures in the book. He criticizes, for instance, an illustration of the late-eighteenth-century Stroganov Palace on the grounds that it is accompanied by a 1836 quotation from Gogol’s description of Nevsky Prospect. However, this building did stay there in Gogol’s time (and still is there), being one of the outstanding features of this central street. Mr. Nabokov does not like a Peter I’s portrait reproduced in the book—just one engraved by a very prominent Russian artist and considered, by art historians, one of the best renderings of the Emperor.

Even some slightly inexact transliterations did not escape Mr. Nabokov’s nagging eye—except for his own little kliukva when he writes strel’tzy instead of strel’tsy. Using his own words, “one could go on to show at even more boring length” many mistakes and misjudgments of the reviewer himself…

All this is not to say that the book reviewed is free from mistakes and laps but, being what it really pretends to be, that is, a first and brief introduction to Russian historical costume, it is certainly far from being so thoroughly bad as Mr. Nabokov tries to represent it. For such kind of prolific critical writings, there exists another good Russian expression—Lovit’blokh—“to chase the fleas,” meaning to waste time on criticizing trifles and trying to make them look important. This is the reason why it seems to me appropriate to conclude with an advice to publishers of book reviews, using the reviewer’s own words: “Beware of well-meaning but muddle-headed amateurs, however illustrious their names may be.”

The Metropolitan Museum of Art 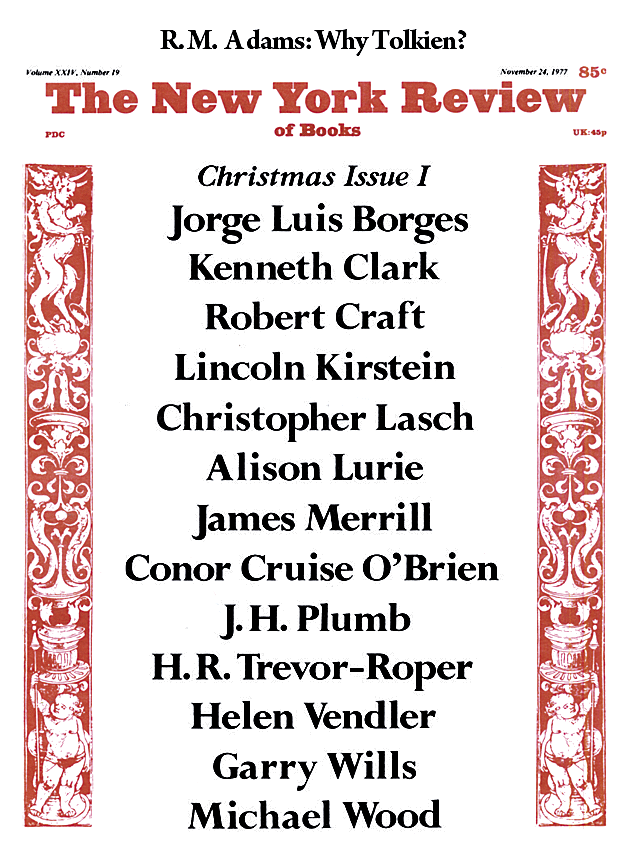 Nabokov on the Wing

Under the Cranberry Tree