The French thought they had rid themselves of the Vietnam war in 1954 at Geneva, the US in 1973 at Paris, and now, six years after the end of the war, the horror of Indochina continues. The social transformations of the Indochinese societies turn out to be nearly as cruel and bloody as the war that ended in 1974. This fourth war—after the French, American, and civil wars—is different in the kinds of blackmail, extortion, and expulsion taking place inside Indochina while a cut-off of food to Vietnam is being urged by some European nations.

This war, too, has obviously evoked a different alignment of political forces and intellectual opinion. All the Moscow-line Communists from Ulan-Bator to Paris unreservedly support Vietnam—Humanité insisting, for example, that French working-class municipalities will not welcome Vietnam refugees—while for China, Vietnam is now in the enemy camp. As for the international intelligentsia, to the extent it exists, it seems clear that most noncommunist leftists and liberals who opposed the Vietnam war have broken with the cause—or at least with the methods—of Hanoi.

Thus, in the small but still significant world of French intellectual politics, the most striking recent event was the hand-shake exchanged between Jean-Paul Sartre and Raymond Aron at a press conference where they joined in calling on the French government to save Indochinese refugees. In fact Sartre and Aron had both signed an appeal last November by which a diverse group of intellectuals and politicians sought funds for a boat to pick up refugees stranded at sea. But ten years ago it would have seemed impossible that Sartre and Aron would appear together on the same platform for the same cause—and quite unthinkable that the cause would concern Indochina. On Vietnam, more than on any other question, Sartre would have been expected to repeat the statement he made about Aron in 1950: “An anticommunist is a dog.”

During the student rising in 1968 Sartre remarked to a friend, “My dream is to see Aron naked, undressed by students in the middle of a lecture hall.” Yet in June there he was, sitting next to his old schoolmate at the Ecole Normale, his old adversary—Sartre, the enemy of all institutions, refuser of the Nobel prize. And together they went to call on Valéry Giscard d’Estaing, the bourgeois politician par excellence, asking him to save and admit to France many thousands more refugees from Vietnam.

Still, to talk of “rapprochement” between Sartre and Aron, as Aron told us, “would be an exaggeration. Evolution on his part, yes. There was a time when Sartre thought that in the name of the revolution all violence was good, and even necessary—as in the famous preface to Fanon’s Wretched of the Earth. For myself, I do not believe that compromise is always of more value than struggle—Algerian independence could not have been won except by violence. What I detest, in dealing with such a situation, is not the choice of violent means over accommodation; it is a philosophy of violence for itself.”

“Now,” Aron added, “Sartre has taken the measure of the consequences of violence. He has sensed more sharply the value of compassion, the specificity of ‘humanitarian’ problems, and it is on this ground that we have met. But I doubt this will go much further.”

How can we explain this “evolution” of Sartre from his emphasis on violence to the espousal of acts of compassion? His views of three countries can suggest an answer: Israel, China, Cambodia. In 1967, the author of Being and Nothingness appears to have considered the limits of “revolutionary violence” and chosen to give a higher priority to the defense of the Jewish state. Then the liquidation of Maoism in favor of the bureaucratism of Teng—and the “lesson” given to Vietnam by Peking—no doubt deepened Sartre’s mistrust of such violence. And finally the mass killings in Cambodia by a ruling group calling itself Marxist showed him how revolution can end up as a hideous caricature of itself. “Politically,” the refugees may be “our adversaries,” Sartre said on June 20. “Humanly, we must do everything to save them.”

This agreement between the two contemporary French thinkers most opposed to each other cannot of course resolve the dilemmas and contradictions surrounding the problems of the refugees. As thousands of people die on the open seas or on the Thai border—as many as a thousand a day according to some estimates—how are we to interpret the responsibility for what is happening? For communists who are linked to Moscow, and for some of Hanoi’s wartime friends, the Vietnamese government has no responsibility at all. All responsibility falls on French colonialism, on American imperialism, and on China (along with its ally Pol Pot). And it should not be necessary to say what is now often left unsaid in the West: that eight years of French war-making, leading to the imposition of vast American power over the same territory, gravely weakened the fertility and the productive power of the Indochinese countries, and created special obligations, especially for the US, to help repair the damage done. As for China, its hostility toward the Vietnamese has been growing since 1975, when, after trying to discourage the Vietnamese from taking Saigon, the Chinese occupied the Paracel islands and supported a regime in Phnom Penh fanatically hostile to Hanoi, finally invading Tonkin in spring 1979.

Chinese power, it must be said, seems to have created in the Vietnamese leaders a kind of paranoia about being invaded and choked off—a hysteria whose tragic victims have been the Vietnamese of Chinese origin, for it is they who make up 75 to 80 percent of the Vietnamese refugees, according to some estimates. A minority of these people, mostly peasants, come from North Vietnam where they seemed indistinguishable from their Vietnamese neighbors. Most come from the South and were small shopkeepers, traders, middlemen. Having lived, many of them, in Vietnam for generations, they are still also linked by culture and sensibility to China, and in some cases they have patriotic feeling for China, may even be manipulated by China, although relatively few seek refuge there, and some, certainly, would seem to have closer affinities with the refugees who leave China itself for Hong Kong.

It is not pure racism that has caused the “Hoas,” the Vietnamese of Chinese origin, to be driven out, as the frequent comparison of their situation to the German Jewish refugees from the Nazis would suggest. The German Jews were not linked even tenuously with a powerful neighbor threatening the Reich. But it only compounds the inexcusable mistreatment of these poor people that fervid anti-Chinese feelings and suspicions should work to cast them out of Vietnamese society and onto the seas—and only after many have paid in gold for the privilege of risking their lives.

Indeed, those who emphasize French and American responsibilities in the past must recognize the responsibilities of the Hanoi leaders now—not only for the Hoa refugees but also the heavy responsibility of having turned the “liberation” of the South into a brutal occupation, of having transformed the southern society shaped by the French and the Americans into a population of the guilty, while tending to classify those who were “bourgeois” as irredeemable, and thus as people condemned to despair and flight.

But the question that must have priority now is not how to assess responsibilities, but how to save lives, first of all the lives of those who are on the seas or on the Thai frontier. The three countries most involved—France, the US, and China—should be most concerned to rescue and provide for and resettle these refugees. This cause is obviously the most urgent, as Sartre and Aron insisted to Giscard d’Estaing—eliciting mainly the modest response of a visit to Hanoi by Olivier Stirn, a member of the government. There lies beyond it the fundamental question of the relation of the Western nations to Indochina. And here the fact must be faced that no large or lasting solution of the problem of the refugees can be formulated without the participation of Hanoi and without addressing the legacy of destruction caused by the war.

While many thousands of Vietnamese of Chinese origin have left Vietnam in the last year, hundreds of thousands more of such people, perhaps more than a million, remain, as do millions of other hungry or beleaguered people. If more of them are not to feel they must risk death by leaving, if their lives are to be made more tolerable, then the Western nations must work with the leaders in Hanoi—as Cyrus Vance could not help recognizing when he said, on July 5,

Apart from the rescue of the refugees, the contribution of the international community, if it is to be effective, will have to take three inseparable forms. First would be aid that will directly help the peoples in Vietnam, Laos, and Cambodia who either cannot or do not want to leave—aid by which the industrial nations that brought about destruction in Indochina would help rebuild the ruins and feed the hungry. (Of course it is futile to speak of aid from the Chinese or reparations for China’s recent invasion. Peking now offers only destruction to the Hanoi regime, which can, at best, only hope the Chinese will let it alone.)

Second would be aid to the surrounding countries, to encourage them to save and not to reject the boat people and to organize something more humane and productive for them than the grim camp life in Malaysia, Thailand, and Indonesia. Helping the refugees in this way will produce a series of other difficulties, notably those arising from resentment of the growing diaspora of ethnic Chinese in these states. But in view of the profits these nations made from the Indochinese wars and the evident benefits that the settlement among them of industrious and skilled people could bring, I suspect that such difficulties might gradually be resolved. The third form of aid would help the refugees to settle in the industrialized countries themselves, starting with France and the US: aid that is now far from sufficient. Only by facing all three needs can we adequately begin to deal with the depthless problems posed by the refugees—inside as well as outside Indochina. 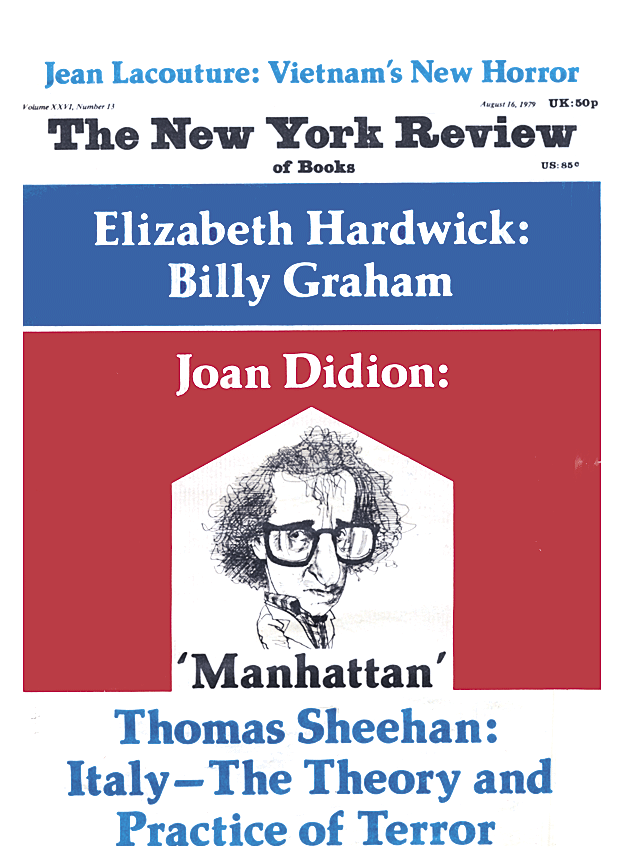 ‘On the Death of Mitterrand’: An Exchange

‘On the Death of Mitterrand’: An Exchange