In this quietly scarifying, very funny, and wonderfully compassionate novel, the poet James Schuyler invents over-lapping scenes describing middle-class suburban Americans leading some of them “normal” and apparently healthy lives and others lives which are “mentally disturbed.” The action alternates between “homes”—those of the Taylor family, the widow Mag Carpenter, and the consciously eccentric Trompers—and the ward of a hospital where patients are receiving treatment for mental breakdowns of various kinds. Normal and disturbed gather in the “family group” therapeutic sessions which take place in a wing of the large general neighborhood hospital, where all discuss their “problems,” under the guidance of Dr. Kearney, “a young man with red hair” who, as he explains, is there “just to audit and put in my oar now and then.”

The figure connecting the normal with the mentally disturbed is Charlotte (or Lottie) Taylor, who combines in herself both. The book opens with her and Norris her husband entertaining their friends and neighbors the Delehanteys, whom Lottie has invited without remembering to inform her husband that she has done so. The Delehantey family consists of the old Mrs. Delehantey—a mine of family memories—her overweight daughter-in-law Maureen, who manages—very adroitly—her husband Bryan, a carping and bullying father to their twin sons Michael and Patrick.

Mr. Schuyler’s characters speak exactly as one would expect them to do in “real life,” except that what they say seems to have been edited, cut, and selected with the wit of a Ronald Firbank who has slanted his art toward naturalism. Maureen Delehantey’s “robust frame appeared freshly back from the upholsterer.” The characters express themselves in clichés, often appearing as self-description. Mrs. Tromper says: “I’m afraid we Trompers have a reputation for rather free and easy ways.” Mag Carpenter describes herself as “a creature of impulse.”

Of the Delehanteys Mr. Schuyler writes:

When they saw in what the appetite-whetters were served, the conversation turned naturally to the subject of collecting. Spoons, salt and peppers, towels stolen from distant athletic clubs with matching ash tray; then Biddy put in her two cents worth.

Charlotte Taylor, preparing to leave for the clinic, quizzes her husband about his far from unpredictable behavior in her absence: “I wonder what you’ll do when I’m gone? Are you planning to remarry?” To which he responds, “What’s for dinner?” She: “I suppose you’ll go on some sort of trip and meet somebody so it’s no good trying to figure out who you’ll pick. Meat loaf.”

Norris is telephoned, almost immediately after Lottie’s departure, by the Taylors’ recently widowed neighbor, Mag Carpenter, who, after only the most cursory preliminaries, asks him whether he will come over and spend the night with her. His answer reflects the received tolerance of unshockable psychoanalysis: “I’m flattered that you should ask me that. It’s a real compliment. But I think we’d better not.” And it is by an extension of the same received ideas that a few minutes later Norris should take up the telephone and announce to Mag that he will be coming over shortly, which he does, though he is too aware of neighbors watching from their windows to stay with her the whole night.

In the society in which he lives, Norris is the perfectly rational male, complacent, self-regarding, representing the outer world of business which surrounds his stay-at-home, kindly, sympathetic, sexually satisfied, yet craving, childless wife. Lottie is an alcoholic, Norris is controlled in his drinking, as in everything else.

Norris keeps his affair with Mag well within bounds (his bounds), never having two orgasms in one night, and frequently making it clear beyond all doubt that as far as he is concerned this affair is only for the duration of Lottie’s absence. When Lottie does come back, he takes Mag to a bar for a farewell drink, and in answer to her probings into their future, says firmly: “Are we going to review all that again? I thought I made it clear: I’m a married man: a happily married man.”

During the time that his wife is in hospital, Norris attends family therapy sessions, and shows a worldly-wise, complacent businessman’s grave comprehension of the patients, most of all of his wife. The patients are: Bertha, the “furthest out,” both in the sense of her coming from the craziest fringe of California and of her being clinically on the verge of real insanity; Mrs. Brice, in prolonged depression after the death of her son and his wife and babies in a car accident; the morosely disagreeable Mr. Mulwin, who has broken down as a result of excessive worrying over his chain of drugstores; the mousy Mrs. Judson, who has never recovered from terrible punishments inflicted on her in childhood; the sadly suicidal Mr. Carson, and so on.

Perhaps the reason why one feels that one knows all these people so well is that Mr. Schuyler refrains from passing judgment on them, presents them exactly as they are. He is wittily selective, but not satiric or judgmental. The ones who are being treated in the clinic undergo changes from nasty into nice as a result of tranquilizers and other drugs administered to them. Mr. Schuyler traces the courses of their illness and return to health with detachment. He conveys very well Lottie’s passionate lust for alcohol which seems so at odds with her wise and kindly personality.

“Clinical” seems the best word to convey the tone of this novel. Apart from the affair between Norris and Mag—and that is completely predictable—there is little story. Mr. Schuyler’s characters are specimens in laboratories with charts attached to them on which their ups and downs and general lines of improvement or relapse are noted. Despite his pervasive irony, Mr. Schuyler seems to retain a certain respect for medicine and science. He seems to acknowledge that the therapeutic discussion groups can be beneficial to those who participate in them. This fair-mindedness may seem to run contrary to his own extreme sharpness and cleverness, but strikes one as truth for that reason.

To a great extent he defictionizes fiction, but there is an important and very fortunate exception to this, in his portrayal of the Delehantey twins, Michael and Patrick. The libidinous Michael creeping out of his own bed and into Patrick’s to jerk off his brother (who pretends to be asleep); the twins’ deadpan response to the lectures and rebukes administered to them by their father Bryan; the persistence of their mother Maureen in putting the most generous interpretation on their pot-smoking and other conspiratorial activities with their schoolmates up the road. Such scenes have the exuberance of invention and provide pantomime touches within a novel which is serious comedy.

Patrick, bidding goodnight to his brother Michael, makes an injunction that well might be a comment on the situations of some other characters in the novel: “Try not to fart in your sleep, and gas us both to death.” For the line which Mr. Schuyler draws here between the mentally disturbed who go to the hospital and the undisturbed who stay in their homes is so thinly drawn that one suspects that those who are sent away for treatment are embarrassing nuisances, not really much crazier than those who stay at home.

One of the family therapy discussions touches on religion. Mrs. Brice, at last brought to discuss the car accident that killed her son and his family, remarks: “I don’t know what people mean by God’s infinite mercy. I’m not going to think about it. I’ll keep going to church, but I won’t think about that.” The conversation goes on:

“Sure,” Mr. Mulwin said. “Why not? We’re not church goers though. I like to get my sleep Sunday morning.”

Mr. Brice interposes that going to church gives him “a feeling of peace and a deep sense of the mystery of things.” Norris says that he is not a church-goer, “But thinking about God gives me similar feelings.” Lottie says she did not know her husband ever thought about God.

“Work is prayer,” Mrs. Brice said. “Good works, that is. I was taught that in Sunday school, and never forgot it. So someone who is doing the right thing, might in a sense be praying, and believing in God, without even knowing it.”

“My work is rather mundane for that,” Norris said. “I wonder if selling used cars comes under the heading of work is prayer?”

They move from religion on to politics:

“I don’t believe in private property,” Bertha said. “Everything ought to belong to everybody, like a commune.”

“I don’t hold with communism,” Mrs. Brice said, “but it does seem wrong that some people work very hard all their lives and have nothing to show for it. That’s never seemed quite right to me.”

“And the last shall be first,” Mr. Brice murmured.

“And the rest of us will bring up the rear, lugging our TV sets,” Norris said.

Dr. Kearney cut short this conversation: “Do you think we could return to the more immediate problems of this world?… This is a hospital, not a seminary.”

“Oh dear,” Mrs. Judson said, “and just when I was getting interested.”

In this claustrophobic world of material satisfactions, the characters move from the circle of the living room where a light is switched on and “a painting of an Indian encampment sprang into view,” to the hospital where art is therapy. The doctor closes the circle when it opens onto wider subjects than the “problems” that brought them to the hospital in the first place.

Mr. Schuyler is not a satirist, but he is ironic. Perhaps there is irony in the happy ending with which he provides Lottie and Norris Taylor. It may be true to the character of Norris that he should renounce Mag, but it does not seem true to Lottie that she should be cured and settle down to late connubial bliss. The deeper irony lies perhaps in the implication that the circle which is the home feeds its unfortunates into the circle which is the hospital, and the hospital feeds the “cured” back into the home. Both home and hospital are closed circuits that limit themselves to the idea that the cure for the problem—which is being alive—is for the individual to fix his attention entirely on himself, his health or his neurosis. This idea is itself perhaps the neurosis of the society. Mrs. Judson had a glimpse of the way out, and of a door being closed, when she observed that the conversation was stopped just when it was getting interesting. 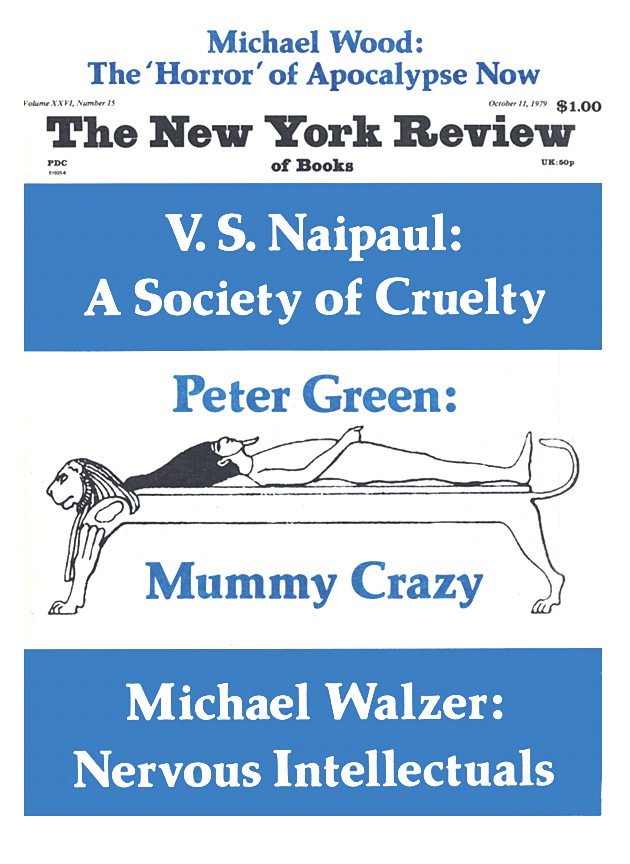 The Mythical Life and Love of D.H. Lawrence

On Fame and the Writer

The Mythical Life and Love of D.H. Lawrence

On Fame and the Writer

Stephen Spender (1909–1995) was an English poet and essayist. As a young man, he became friends with W.H. Auden, Louis MacNeice, Cecil Day-Lewis, and Christopher Isherwood, a loose collection often referred to as “the Auden Group” or “MacSpaunday.” He published many collections of poems, including The Still Centre and Ruins and Visions, and numerous volumes of nonfiction and other works, including Learning Laughterand Love-Hate Relations.