The Macedonian Connection from the January 22, 1981 issue

I was puzzled to read Peter Green’s review, “The Macedonian Connection” [NYR, January 22]. He ventures into ancient Greek history and presumes to pronounce judgment on some intricate and controversial issues. He does not, however, appear to be in command of the necessary professional knowledge.

In fact, he has not even seen the books he is discussing. If the reviewer had seen R.L. Fox’s book, he could not help but notice the official stamp of the “Search for Alexander” exhibition and would not have written that the Greek authorities “refused to give the book their official imprimatur, and washed their hands of the author” (whatever that may mean). As for the reviewer’s lacunae in ancient Greek history, one could not enumerate them all. It would certainly require a seperate [sic] essay to discuss them. Per force [sic] I shall have to limit myself to a few striking examples. (I cannot help but mention an otherwise minor error which nevertheless suprises [sic] coming from a supposed specialist. Philip never received “an arrow wound in the thigh,” but an arrow wound in the right eye and a sarissa wound in the thigh, which is quite different.)

It is possible that the reviewer does not know that the “politically loaded” “six words,” “Macedonia and the Rest of Greece,” in the title of the Symposium, which by implication he ascribes to some sinister and fertile imagination of—to use his own term—“neo-Macedonian propaganda” agents, are the very words that, according to our ancient authorities, were used by Alexander in his letter to Darius after the battle of Issus (Arrian 2.14.4: “Your ancestors invaded Macedonia and the rest of Greece?”) Can he ignore that Macedonia is described as a part of Greece not “in modern political terms,” but in the actual texts of ancient historians and geographers (cf., for instance, Strabo 7. frg. 9: “Macedonia, of course, is a part of Greece”)? How can he possibly be unaware of the fact that Demades, far from being an Athenian freedom fighter, was in fact the leader of the pro-Macedonian faction in Athens and therefore should be the last person to be cited as an example of the opposition of the Greek city-states to the “detested rule” of the “alien barbarians”? (On Demades of., for instance, Real Encyclopädie IV, 2703-2704.)

Furthermore, his linguistic competence does not appear particularly impressive. The reviewer’s French is not perfect; otherwise he would never have used beau idéal (beautiful, high ideal) instead of bel idéal. I am at a loss to decide whether these errors should be ascribed to innocent ignorance or to deliberate malice. I have not yet completed my reading of R.L. Fox’s book, in order to determine whether the Greek Ministry of Culture made a wise decision in including it to [sic] the exhibition. However, after reading Peter Green’s review, I can now well understand why Time., Inc. never considered commissioning him to write the Alexander book, which was finally proposed to his younger colleague.

Mr. Lewis generates more heat than light. Let me comment briefly on the points he raises.

(i) Regarding Robin Lane Fox’s book (which, whatever Mr. Lewis may think, I read from cover to cover in the line of duty), I’m afraid an official egg-stamp, issued faute de mieux, impresses me less than the remarks of the book’s author in Washington, and the reports of those who discussed the problem with him.

(ii) Philip’s wounds: Mr. Lewis may be right about the wound in the thigh (Plut. Mor., 331 B says a spear, Demosth. De Cor. 67 merely reports that he was “transfixed”), and in fact in my Alexander of Macedon (1974), p. 69, I describe it as a “spearthrust” myself; but this slip, if slip it is, cannot compare with Mr. Lewis’s own suggestion that Philip was wounded by a sarissa, the Macedonian weapon par excellence. Does Mr. Lewis suppose that Philip on this occasion was the victim of some deranged mutineer in his own army? A gross libel on the Triballian tribesman who actually did the job.

(iii) Macedonia as part of Greece: here Mr. Lewis either hasn’t read the sources he quotes or is being deliberately disingenuous. Strabo, a lickspittle pro-Roman intellectual writing in the Rome of Augustus, has to deal with a Macedonia that had been a Roman province for a century and a Greece, also long subjugated, that was in the process of becoming one. Politically they came under the same aegis. Yet even so, in fr. 9, he is at pains to emphasize Macedonia’s separateness from Greece. As for Alexander, what else does Mr. Lewis expect him to claim, not least when writing to Darius? The survivors of Thebes knew precisely what that assertion meant: let Mr. Lewis reread the Athenian orators to remind himself of the other side of the story. Alexander’s assertion has about as much value as, say, a reminder from Leonid Brezhnev that Lithuania forms part of the USSR.

(iv) Demades was neither “an Athenian freedom fighter” nor, arguably, “the leader of the pro-Macedonian faction in Athens,” but a crafty opportunist of Laval-like instincts (see the character analysis in my Alexander of Macedon, pp. 78-79 and elsewhere), who flattered Alexander when he was alive (“Macedon without Alexander would be like the Cyclops without his eye”), earned a bronze statue from the Athenians for cooling the conqueror off after the sack of Thebes, and then insulted Alexander when news of his death came, knowing well what would please anti-Macedonian sentiment. This did not stop his being disfranchised, though, characteristically, he was rapidly reinstated in 322 to talk Antipater out of attacking Athens. Blow hot, blow cold.

(v) Linguistic competence: as the translator of many distinguished French authors, ranging from Simone de Beauvoir to J.M.G. Le Clézio, I really do know the difference between beau idéal and bel idéal. If Mr. Lewis will reconsider the passage in question, it may occur to him why I wrote what I did. Nor do I think that a person who in one letter can perpetrate such varied solecisms as “seperate,” “per force,” “suprises,” and “including it to [sic] the exhibition” is in any position to carp.

(vi) I too understand, very well indeed, why Time, Inc. never considered commissioning me to write “the Alexander book” (even though my own biography was a working handbook for the exhibition’s organizers), and a nicer compliment to my scholarly integrity I’ve never had. On this issue, one last point. Mr. Lewis is very free with accusations of professional incompetence, not only in matters of language but also as regards ancient history. I have no notion what he may do for a living, but may I say that, on the basis of his performance in this letter, I wouldn’t give him a job as a TA? 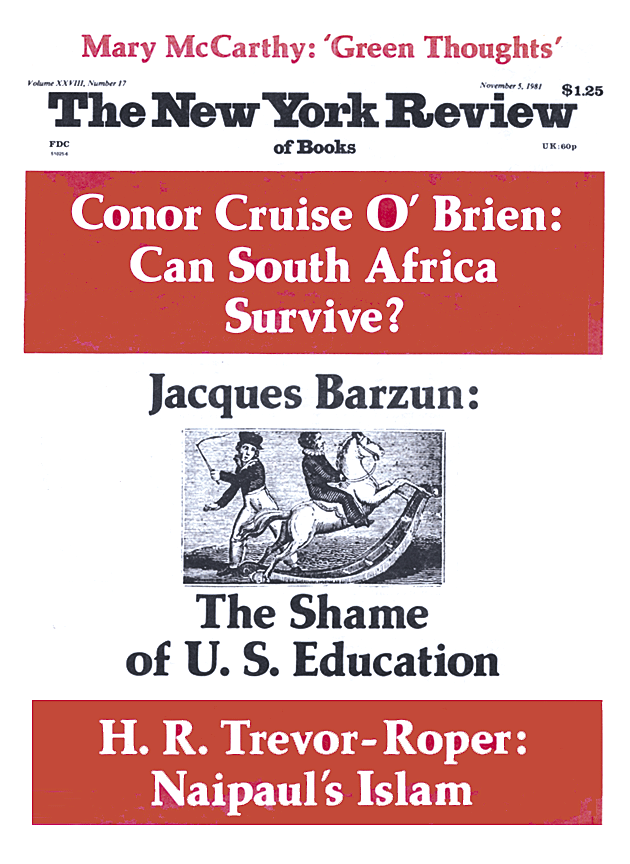 The Birth of a Nation

Bosnia and the Balkans: An Exchange

The Romance of Sinclair Lewis