The Waldheim File from the October 9, 1986 issue

I would like to comment on a few points of Gordon Craig’s article “The Waldheim File” [NYR, October 9, 1986].

I disagree with Gordon Craig’s presentation of the Moscow Declaration on Austria in 1943, issued by the foreign ministers of Great Britain, the USA and the Soviet Union. That declaration was not as one-sided as Professor Craig has it. It was Janus-faced. It declared that Austria had fallen a victim to Hitlerite aggression, which, in spite of home-grown Nazism was true enough, keeping in mind that Hitler forced the issue on Austria after the Austrian government had announced a plebiscite to decide on independence or union, which more likely than not would have come out in favor of independence. But the Allied Declaration on Austria also said that “Austria is reminded, however, that she has a responsibility which she cannot evade for participation in the war on the side of Hitlerite Germany, and that in the final settlement account will inevitably be taken of her own contribution to her liberation.” That contribution incidentally, as Radomir Luza has shown in his book The Resistance in Austria, 1938–1945 (University of Minnesota Press, 1984) was larger than many might think. In any case, the double-edged character of the Allied Declaration shows that Austria was seen as a special case, which indeed she was, and Austrians as well as the Allied Powers after 1945 were aware of this.

Contrary to the impression conveyed in Professor Craig’s article, the Declaration on Austria was the result of a protracted drafting and redrafting process, originating in the British Foreign Office, taken up by the Americans, and finishing with several Russian modifications which the Western powers, as Anthony Eden cabled from Moscow to London, while “not liking them,” accepted. The Soviets hardened in particular the “responsibility clause,” substituting “Austria” for “the Austrian people,” thus transforming moral responsibility (which had been the Western powers’ main concern in order to encourage Austrian resistance to the Nazis) into a state’s responsibility, from which possibly legal claims might be deduced—though no Austrian government had been in existence at that time, of course. The reference to “Hitlerite Germany” was also of the Soviets’ making.

After the end of the war, the Soviets pointed time and again to that responsibility clause during the Austrian Treaty negotiations, and the four Allied Powers (now including France) in 1947 agreed to include a similar reference in their draft preamble to the Austrian State Treaty. Only on the eve of signing that Treaty in May 1955 did Austrian Foreign Minister Leopold Figl succeed in getting that clause stricken off the treaty text. By that time, of course, the Soviet Union displayed newly developed benevolence toward a country which was precluded from joining NATO.

As for the West, Austria had “worked her passage” (to use words Ernest Bevin applied to Italy in 1946) long ago by having become a trusted anti-communist and democratic nation. “A miracle of faith, courage, and skill,” as Sebastian Haffner enthusiastically described Austria to the readers of the London Observer in 1953—though presumably there ought to have been more Nazis around then than thirty-three years later…. The West trusted Austrian leaders like long time Chancellor and Foreign Minister Leopold Figl, who had spent five years and seven months in the Dachau, Flossenbuerg and Mauthausen concentration camps, or like the Socialist leader Oscar Helmer whose relentless and successful fight against communism won him the Freedom Medal of the United States.

I find it difficult to agree with Gordon Craig that in Austria “no past was to be assimilated.” For that to be the case, denazification and the persecution for Nazi crimes after 1945—though I tend to be critical of certain aspects of it—was too burning an issue after 1945. Austrian courts sentenced 43 people to death, thirty sentences were executed. One may argue that there were too few harsh sentences or too many, one may argue for or against the death penalty in these cases, but one cannot ignore them. The comparative history of the épurations on the continent of Europe after 1945 has not yet been undertaken, as far as I am aware. In order to grasp some of the problems involved in the reconstruction of Europe after 1945, Americans might have to go as far back as Reconstruction after the Civil War to find perhaps something at least faintly resembling these problems.

I also tend to disagree with some points of Professor Craig’s description of pre-1938 Austria. In his analysis of Austrian desires of union with Germany (the Anschluss), Professor Craig says that this desire ceased with the left-wing parties after Hitler took power in Germany, yet he fails to point out that pro-Anschluss feelings in Austria were weakest in the catholic camp both before and after 1933, a camp within which the idea of a distinct Austrian identity developed earlier than among the Socialists who regarded, as Otto Bauer said in 1938, the idea of Austrian independence as reactionary.

While the masses cheered Hitler’s appearance in Linz or Vienna, while Austria’s Jews and, too little known, thousands of Christians of mixed marriages (a heritage of the age of emancipation, liberalism and assimilation!), as well as not so few others stayed away fearstricken, while the scum of the cities and Nazi fanatics, sensing that the protection of the law was being lifted from the Jews, got ready for the misdeeds that are our shame, an event took place that significantly differentiates Austrian from German development. I refer to the wholesale purge of the top echelons of the Austrian administration, of provincial and local government, of judicial officers (some involved in the persecution of Dollfuss’ Nazi murderers met terrible deaths in concentration camps) and of school authorities. The purge in the spring of 1938 contributed to the fact that seven years later a fairly large number of people untainted by Nazism was available, thus enabling the new Austrian government to be set up and getting to work within weeks only of the breakdown of Nazism.

As to Dr. Waldheim’s dissertation, I tend to agree with Professor Craig on the major points of his analysis. I also think that it was rather a rush job, and I have also noted that Waldheim did not refer to a single one of Constantin Frantz’s anti-Semitic arguments. Though the rhetorical flourishes toward the end of the dissertation extolling the role of Germany are not to my liking, I think like Professor Craig that they were intended to attract the benevolence of academic (and perhaps political) authorities, though not necessarily of Professor Heinrich von Srbik, who belonged to the Faculty of Philosophy and not to Waldheim’s Law Faculty. Reading the dissertation, it emerges how different Frantz’s concept of federalism was from anything practiced in the Third Reich—Frantz pointing to the Trias of Law, Peace, and Federation, accompanied by Liberty, which cannot exist without those three. One also sees that Waldheim did not avail himself of diverse possibilities of ingratiating himself with the powers of the day. There is no reference to Nazi theories of international law as expounded by Carl Schmitt and others; there are no references—so frequent in the Nazi writings of the day—to the Nazi “movement,” to the Nazi “party,” or to the Fuehrer. There is no reference to the central Nazi concept of “race,” and indeed, let it be said again, not a single anti-Semitic quote or phrase. Perhaps that should be on record, too.

The University of Vienna

That the Moscow Declaration on Austria was both Janus-faced and the subject of considerable negotiation I do not deny, but this concerned me less when I was writing my review than the more fundamental question of why there was any disposition whatsoever on the part of the Western powers to treat Austria as a special case. This still puzzles me. In accepting the Allied explanation for their decision, Professor Stourzh seems to trivialize the importance of what he calls “home-grown Nazism.” In reality, however—and this was well enough known in 1943 to have been taken into account by Washington and London—the Anschluss of 1938 was greatly facilitated, first, by a Nazi infiltration of the highest reaches of the bureaucratic and economic establishment in Austria, including the government, that was so extensive that the authoritarian state structure that had been created by Dollfuss could be manipulated to effect its own subversion, and, second, by a popular rising on a broad scale, inspired and directed by the Nazis but acquiring its own momentum, which in some places—Linz, for example, and Graz, which later prided itself upon having been “der Stadt der Volkserhebung“—completely immobilized the government at the moment of crisis. Professor Gerhard Botz, director of the Boltzmann Institute for Historical Social Science of the University of Salzburg, has written that “in the case of the Anschluss of 1938 we are dealing not merely with a case of military occupation, as is often assumed or stated in Austria, but with an assumption of power by National Socialism which went hand in hand with the manifestation of massive, deep-lying, long-repressed social and economic potential for protest, which found its outlet only in a wild anti-Semitism.”

It was never my intention to imply that rejoicing over the Anschluss was universal. But there were few signs in 1938 that Austria considered itself to be a conquered nation. In the photographic record of the entry of the German troops into Vienna there are no anguished and tear-streaked faces as was true in the case of the similar action in Prague a year later. The Anschluss was approved by 99.7 percent of the respondents to the Volksabstimmung of April 1938, with notables like the former Socialist Chancellor Karl Renner and Cardinal Innitzer urging approval. In the years that followed proportionately more Austrians than Germans joined the NSDAP, so many in Carinthia that it became known as “the Führer’s loyalest province.”

Professor Stourzh speaks of the weakness of pro-Anschluss feeling in “the catholic camp.” But surely this was true only as long as the catholic leaders retained confidence in the success of their own experiment in authoritarian rule. Once that confidence waned, after the death of Dollfuss, they were ready enough for an accommodation. Professor F.L. Carsten of the University of London tells us that at the beginning of March 1938 even Chancellor Schuschnigg was assuring Hitler’s envoy keppler of his “unconditional loyalty to German nationhood (Volksdeutschtum), to a common policy in which he would never disappoint us” and urging him to study his “great works for Germanization, especially in the Burgenland.”

My statement that, for many Austrians after 1945, “there was apparently no past to be assimilated” seems to offend Professor Stourzh, yet Jean Améry made the same point in 1961 in his book 1945: In Search of Europe, expressing amazement over the extent of Austrian historical amnesia, and further support is to be found in the fact that, until the late Sixties, the period 1938–1945 was studiously avoided by Austrian historians, research on it being left for the most part to their foreign colleagues, and that this situation, which, Professor Botz has written, makes it “easier for Austria to repress any responsibility for its own Nazis,” has not greatly improved since then. It is perhaps worth adding that the fact that the Christian Social ÖVP began as early as 1945 to work for a restoration of voting rights to Austrian Nazis—despite their disproportionately prominent role in Hitler’s murder apparatus—shows a real facility for forgetting.

The question of the efficiency of the denazification process in Austria after 1945 I did not touch on in my review and need not discuss here. Professor Stourzh says that he is “critical of certain aspects of it,” and that is good enough for me. 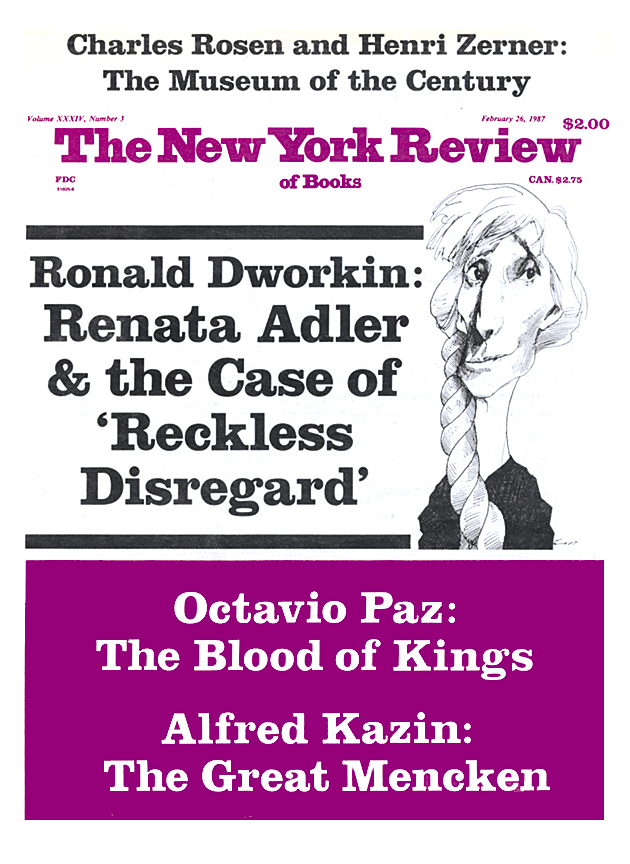 Tale from the Vienna Woods

Austria & the Ghost of the New Europe

An Appeal in Iran

The Long Shadow of the Austrian School