“Low ceiling,” a distinguished novelist on an awards committee demurred when I spoke up for these stories by Richard Ford. Though often funny, his situations are not particularly sunny. In “Optimists” a railroad man who shunts engines through the yard sees a hobo mangled on the tracks. Returning home in a vehement state of mind to tell his wife what he has seen (and he is already vehement about her as well), he is so stunned by a guest in the house who arbitrarily criticizes him for not saving the hobo that with one blow he kills the guest. In “Empire” a man on a train journey with his wife is gripped by his total isolation in the long dark night when his wife goes to bed. Without liking her very much he makes love to a brusque woman in an Army sergeant’s uniform. In “Great Falls” another rancorous husband suspicious of his wife swoops down upon her with their young son—they have been out hunting—in such a way as not only to end the marriage but to deprive the boy of both parents forever.

These external situations do not convey the moral atmosphere that draws me to these stories, most of them located in a “half-wild” Montana where the frontier never closed and the inhabitants are still untamed. Yet these are people who deeply know themselves to be fallen creatures desperate to rise, people as quick to ruin their lives as they are pathetically willing to examine themselves harshly when it is too late. They say things like, “or maybe I was scared of something and didn’t know it”; “it’s prosperity’s fruit, I’d rather be poor, which is lucky for me”; “the truth is meant to serve you if you’ll let it.” A mother having an affair with a very young man is puzzled by the lover’s gossip that she was married once before, and tells her son, “That’s an awful thing to say. I haven’t been that bad.”

Ford writes an unshowy prose that brings home a great emptiness in America’s West punctuated by Air Force bases. The characters, even when married and intimate, are remarkably out of sync with each other, talk in disconnected subjects as if they were afraid to make sense. They seem so constitutionally distracted that it is hard to say how much their sporadic violence is responsible for what Ford calls “Montana,” or how much “Montana” can be blamed for them. But what is all too clear, so vivid as to make some desperate characters wonderfully humble, is the suicidal nature of people silenced and crippled by their precious “privacy.” These are people who break out of their loneliness—when they do—only to commit some mistake that sends them reeling back.

I like Ford’s writing for the exactness of the circumstances that in each case bring catastrophe. He doesn’t seem to need the “existential” alienation and tight-jawed bitterness that preside over the knowing silences in so much “minimalist” fiction. In the good old tradition of the short story as one-act play, Ford loves to pace an impending action. In “Great Falls” you even hear the sound offstage of a drawer being opened that you know will lead to the husband coming downstairs with a gun. What is unexpected in the circumstances is the deadbeat characters’ yearning for clarity, for some “truth” possibly looming above the mess. The homiletic inquiry tacked on to some stories makes for some strained conclusions. I suspect Ford of not being altogether content with realistic storytelling.

The departed mother who turns up in the son’s later life as a stranger is a recurrent figure, perhaps a symbol of some vacancy at the heart of things. The son’s outcry at the conclusion of “Great Falls” becomes a familiar litany in this book:

As I walked toward school I thought to myself that my life had turned suddenly, and that I might not know exactly how or which way for possibly a long time. Maybe, in fact, I might never know. It was a thing that happened to you—I knew that—and it had happened to me in this way now. And as I walked on up the cold street that afternoon in Great Falls,… I asked myself…why…would [my mother] do what she did? In five years my father had gone off to Ely, Nevada, to ride out the oil strike there, and been killed by accident. And in the years since then I have seen my mother from time to time—in one place or another, with one man or other—and I can say, at least, that we know each other. But I have never known the answer to these questions, have never asked anyone their answers. Though possibly it—the answer—is simple: it is just low-life, some coldness in us all, some helplessness that causes us to misunderstand life when it is pure and plain, makes our existence seem like a border between two nothings, and makes us no more or less than animals who meet on the road—watchful, unforgiving, without patience or desire.

No, we are not at Dover Beach but in the still wild West, some of it as ludicrous as the full-blooded Indian in “Children.” He gets a teen-age Canadian runaway girl to bed in a motel (motels are big in these stories, the neutral corner in marital fights; in Montana they are even called “Tropicana”), then scares her by getting up in the night to squat on the floor and pray. In “Sweethearts” Arlene’s second husband makes breakfast for Bobby, her ex, the day he has to enter jail:

Arlene had said she would drive him to the sheriff’s department this morning, if I would fix him breakfast, so he could surrender on a full stomach and that had seemed all right.

Before arriving at the prison Bobby wails, “So how am I going to keep up my self-respect. Answer me that. That’s my big problem.”

“You have to get centered,” Arlene said in an upbeat voice. “Be within yourself if you can.”

“I feel like I’m catching a cold right now,” Bobby said. “On the day I enter prison I catch cold.”

“I put all my faith in women,” Bobby said softly. “I see now that was wrong.”

As they near the jail, two Indians in plastic chairs are sitting outside the double doors. The second husband, watching Arlene express her relief at getting rid of Bobby by slamming the glove box shut with her foot, feels stuck in marriage. “I knew, then, how you became a criminal in the world and lost it all.”

In the title story Earl and Edna, “a pair eight months,” plus Earl’s little girl and the little girl’s dog, are on their way from Kalispell, Montana, to “Tampa–St. Pete” (how the place names of America throb through these stories) in an ophthalmologist’s stolen Mercedes. Earl is not long out of jail for passing bad checks. The car gives out as they approach Rock Springs, Wyoming, in the dark. The town lights up the sky behind the clear outline of the interstate. “You could hear the big tractors hitting the spacers in the overpass, revving up for the climb to the mountains.” When he has to hide the dead car, Earl wails, “I had wanted all along to drive into Florida like a big success story.” Edna, still brooding on an ex-husband “crazy as a mouse in a shit-house,” is indifferent to Earl’s kid. The little girl, afraid to admit how bad things look for them all, is determinedly cheerful with her dog. They even pee side by side.

Earl, walking up to a mobile home on the edge of town to call a taxi, is told by a kindly black grandmother why he saw Rock Springs as “a little glowing jewel in the desert with I-80 running on the north side and the black desert spread out behind.” The great lights are from a gold mine whose workers are kept in uniform white mobile homes. Cadillacs with New York plates cruise the streets every night, “full of Negroes with big hats who ran the women.” When Earl and Edna are finally settled in the local Ramada, Edna, who has been complaining all along about some lack in his character, sweetly announces she must leave him.

I used to like to go to motels, you know…. There’s something secret about them and free—I was never paying, of course. But you felt safe from everything and free to do what you wanted because you’d made the decision to be there and paid that price, and all the rest was the good part. Fucking and everything, you know.

She just hates being in a motel without a car “that was mine to drive.” Earl protests that he can steal another car from the parking lot. She departs after making love. “None of this is a matter of not loving you, you know that.”

At the end, prowling the parking lot, his eye particularly fixed on a Pontiac with Ohio tags, full of family possessions, Earl realizes how much he is out of family, out of everything. And how does he account for this?

I thought, then, how I never planned things well enough…. As I read on a napkin once, between the idea and the act a whole kingdom lies. And I had a hard time with my acts, which were oftentimes offender’s acts, and my ideas, which were as good as the gold they mined there where the bright lights were blazing. 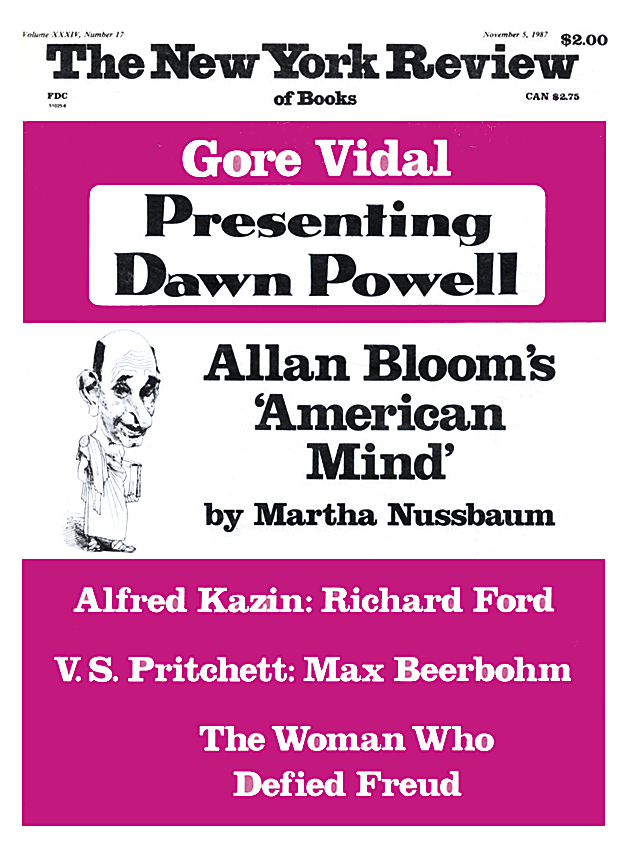 Alfred Kazin (1915–1998) was a writer and teacher. Among his books are On Native Grounds, a study of American literature from Howells to Faulkner, and the memoirs A Walker in the Cityand New York Jew. In 1996, he received the first Lifetime Award in Literary Criticism from the Truman Capote Literary Trust.