Pushkin, or the Real and the Plausible from the March 31, 1988 issue

The March 31 issue of The New York Review of Books carried a translation from the French of an article on Pushkin by Vladimir Nabokov, originally delivered as a lecture on the one hundredth anniversary of Pushkin’s death. The article is prefaced by a fragment of an interview, where Nabokov recalls that he spoke to a mixed audience, having been a last minute replacement for a Hungarian woman writer whose name he cannot recall, but who had attained some fame that winter for her book, La rue du chat qui pêche.

The name of the writer is Jolán Földes; her novel, honored by the All Nations Prize that year, describes life among refugees in Paris. That so many of her compatriots flocked to hear her is a measure of the high regard Hungarians have for literature, and of the thirst for Indo-European recognition of works written in an obscure Ural-Altaic tongue. I was pleased to learn from Nabokov that even the consul of the semifascist Hungarian regime had a measure of veneration for literature, as did, apparently, some members of the Hungarian soccer team.

Jolán Földes was an honest writer; she does not deserve the sneering description as an anonymous literary spear carrier whose finest moment was a timely indisposition that provided an impromptu forum for a great writer.

Several astute readers, including my friend Lola Szladitz of the New York Public Library, have identified the nameless Hungarian lady. No one but Mr. Lax, however, had the partisan zeal to have construed Nabokov’s brush strokes as smears or sneers. The mnemonic lapse, in an interview Nabokov gave almost exactly thirty years after the fact, was genuine. He pokes fun not at the unlucky lady, her indisposition, or her best seller, but, if anything, at himself, when he suggests that “a sudden discourse on Pushkin [might have resulted] in a suddenly empty house.”

I hope Mr. Lax, despite his disapproval, reached the following passage:

If at times life appears pretty dim to us it is because we are nearsighted. For someone who knows how to look, everyday existence is…full of revelations and delights….

It is unlikely that Nabokov was familiar with the Hungarian consul’s politics, but his capsule description of the general quid pro quo, and the “froth of condolence” on the lips of that diplomat (who had mistaken Nabokov for the lady’s husband) is exactly what distinguishes the artist from the also-ran. As for the hastily invited Joyce amid the leftover soccer team, the juxtaposition afforded Nabokov a multiple delight, since he was both a soccer and a Joyce enthusiast.

Nowhere does Nabokov slight the “thirst for Indo-European recognition of works written in an obscure Ural-Altaic tongue,” or the ardor of the lady’s compatriots, although, given the consuetudes of “semifascist” regimes, I have a sneaking suspicion that it was the consul himself who had commanded his soccer team to march to the originally scheduled literary gathering.

And nowhere does Nabokov describe the authoress as a spear carrier, even if we do live in a world where not everyone can perform Bluebeard, Boris, or Nabucco. On the other hand, if I failed to furnish a footnote with the name—Földes Jolán in Hungarian, Yolanda Földes in Westernized form—it is I who am lax. 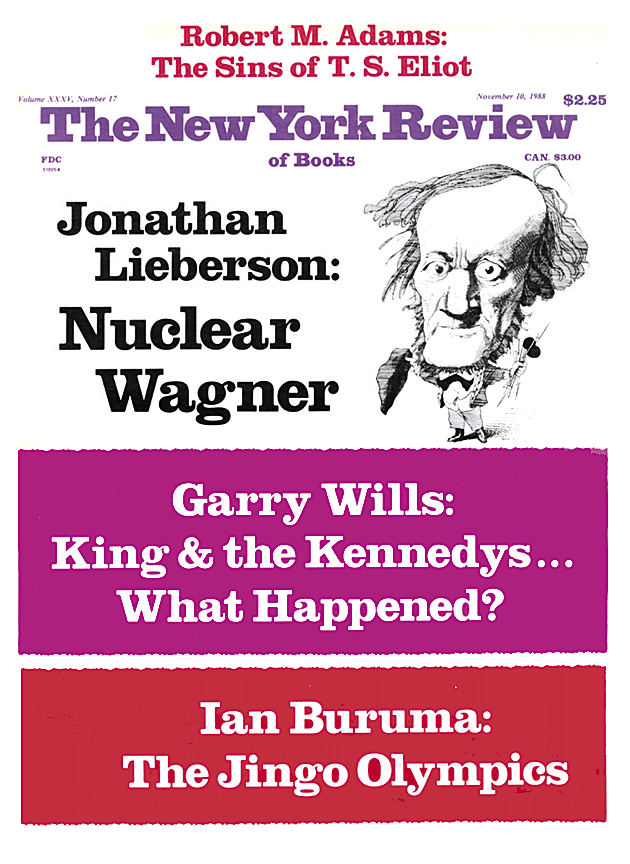 A Contest Between Conjurors

An A from Nabokov

He said his only rule was that we could not leave his lecture, even to use the bathroom, without a doctor’s note.

Nabokov on the Wing