Norman Hampson promises a “careful examination” of my and George Rudé’s books on the French Revolution [NYR, April 13]. I won’t presume to speak for Professor Rudé but in my own case, it is difficult to see how an attentive reading could have produced so many bizarre misrepresentations of what I actually say in Citizens.

Hampson claims, for example, that I am “vague” on the debt crisis of the monarchy when in fact I devote forty pages to that very subject. It is, of course, possible to offer a lengthy discussion and still be “vague” but on pages 64–66 I produce data based on the most recent research produced by James Riley, Michel Morineau, Patrick O’Brien and R.D. Harris. Following Riley I try to distinguish carefully between institutional reasons for the monarchy’s difficulties (which I believe overrated) and the problems brought on by specific policy decisions, concerning for example, accelerated rates of amortization bought at the expense of higher interest rates. Hampson comments that I suggest “those with privileges were reluctant to pay their fair share of taxation” when (p. 120) I say something like the exact opposite: “at the other end of the scale les Grands could afford to dispense with their privileges altogether.” He also announces, as if I had overlooked the point that “what they [the nobility] wanted was to trade willingness to pay taxes for the kind of political representation that their peers enjoyed in Great Britain.” This is precisely the point I make on page 288 (and elsewhere) where I argue that “The monarchy collapsed when the price of its financial rescue was measured not in profits or offices but in political concessions.”

Hampson also claims that I “ignore altogether the demands for representation” when in fact pages 288–304 deal with little else. Nor do I claim, as he suggests, that French agriculture generally shared in the economic boom of trade and industry. The phrase I use to describe agricultural production is “obstinately backward.” What I do try to argue, is that better communications and the slow growth of markets were, in some areas, commercializing the rural economy. It was often in regions where customary rights of cultivators were being eroded that the countryside was most embattled. So far from “failing to see that peasant society was largely motivated by a conception of the world that had little in common with the abstracts of revolutionary legislators” I discuss exactly this problem in connexion with the rural cahiers de doléances in the ten or so pages following p. 307.

I do not, of course, argue the self-evidently ludicrous view that “patriotism had originally been the monopoly of the nobility” rather that it was in the elite (as one might expect) that the most conspicuous examples of a patriotic cult arose following the Seven Years’ War. In fact the whole point of my attention to Pierre de Belloy’s play The Siege of Calais was precisely that it was popular among all ranks of theatergoers, including the quite humble people who attended its free performances. Nor, in view of my concern with the great history paintings of the 1780s could I possibly make the claim Hampson attributes to me that native French heroes replaced those from antiquity. What I do say is that heroic tableaux from both remote and nearly contemporary French history become added to the standard pantheon in the late 1760s and 1770s.

This by no means exhausts the list of distortions and misrepresentations offered by a reviewer who takes me to task for “impressionistic use of evidence.” What really seems to make Hampson cross is my effort to use narrative as a vehicle for argument as well as story-telling. I admit that this does indeed fly in the face of academic convention, and I am not at all sure how well I have succeeded, but the assumption that this can’t be done seems belied by the very passages Hampson cites as instances of my deplorable habit of “seizing the reader’s attention.” The “shabbily dressed stout gentlemen [who] stood on the dockside at Rotterdam” is Malesherbes, a key figure in the creation of the “citizen-nobility” to which I attach some importance. His dress and appearance are not in the least irrelevant to my argument since it was Malesherbes’ casualness about what he wore that reinforced his reputation of the “honnête homme” in invidious contrast to the court fashions that he was appointed to reform. I deliberately refrain from identifying him in the first sentence because his habit of travelling incognito was taken as further evidence of his virtue and modesty. Nor is it inconsequential to situate him in Rotterdam since it was in Holland that he was able to see (albeit through a rather idealised view) the institution of what he thought a truly virtuous polity. Whatever one thinks of the argument, each detail of the narrative description is meant to embody it.

Hampson is impervious to this kind of writing just as he thinks I offer no account of Jacobin ideology because I prefer to describe its acting out in spoken rhetoric, paintings, prints and songs rather than as a set of abstract principles and texts. In the same way he manages to miss the entire point of my earlier chapters in which I try to locate the roots of the Jacobin temperament in the vitriolic anti-urbanism and anti-commercialism of Rousseau and Mercier. It is the latter’s apocalyptic egalitarianism which (to his own later regret) seemed to have its discharge in the Terror of the year II.

It is perhaps not surprising this passes Norman Hampson by since he thinks he has discovered what he takes to be my major intellectual source—the Oxford examination syllabus—a suggestion that would be richly comical were it not so patronising. Not that it matters but I was not at Oxford as a student and never taught the French Revolution when I was there for four years as a teacher. Of course inclusion in the Oxford syllabus ought not to disqualify, say, the Ferrières correspondence entirely from serious consideration as one of the very best sources we have for the proceedings of the Estates General and National Assembly.

It is unfortunate that Simon Schama should choose to regard as hostile a review of his book Citizens, that included both criticism and commendation. Some of what he writes is arguable and some of it appears to be founded on misinterpretation. He treats “seizing the reader’s attention” as dismissive when it seems to me a laudable objective for any historian. Everything depends on how one does it.
Schama denies suggesting that those with privileges were reluctant to pay their fair share of taxation when, on p. 120, he wrote “something like the exact opposite.” What he actually wrote was “It was the poorest among the nobility who clung to their privileges with the greatest tenacity.” He also said that the Court nobility “defended” their privileges for reasons that were not primarily economic.

He objects to my assertion that his treatment of his sources can be “impressionistic.” On pp. 337–338 he not merely rearranges what the marquis de Ferrières wrote to his wife on May 6, 1789, but goes well beyond the bounds of legitimate translation. Ferrières wrote: “Cette France, ma patrie, se montra dans toute sa splendeur…. Amour de mon pays, tu te fis sentir puissament à mon coeur. J’ignorais jusqu’où peut s’étendre le lien mutuel qui nous unit au sol, à des hommes qui sont nos frères; je l’appris dans cet instant.” Schama’s version is: “O my dear France, amiable and good people, I have made an eternal alliance with you. Before this day I had no patrie; now I have one and it will always be dear to me.” Ferrières was a thoughtful and honest man and to say that he “burbled” and ”warbled” (pp. 335, 352) scarcely becomes a writer who is rather prone to blaming other historians for their lack of moral seriousness.

Schama’s argument is always intelligent and often persuasive but his facts are not always reliable. Mounier was anything but opposed to Montesquieu (p. 121); Desmoulins was not connected with the theater (p. 168); Fabre merely pretended to have won his eglantine d’or (p. 169); Mercier was far from being “an apostle of Rousseau” before 1789 (p. 198). These are no doubt points of detail but it would have been better to have got them right. Schama does not take up my specific objections to his somewhat cavalier treatment of the complexities of Jacobin politics in 1794, but there would be no point in embarking on a detailed refutation of his objections that would be unlikely to convince him or to enlighten your readers, who must judge his book for themselves. 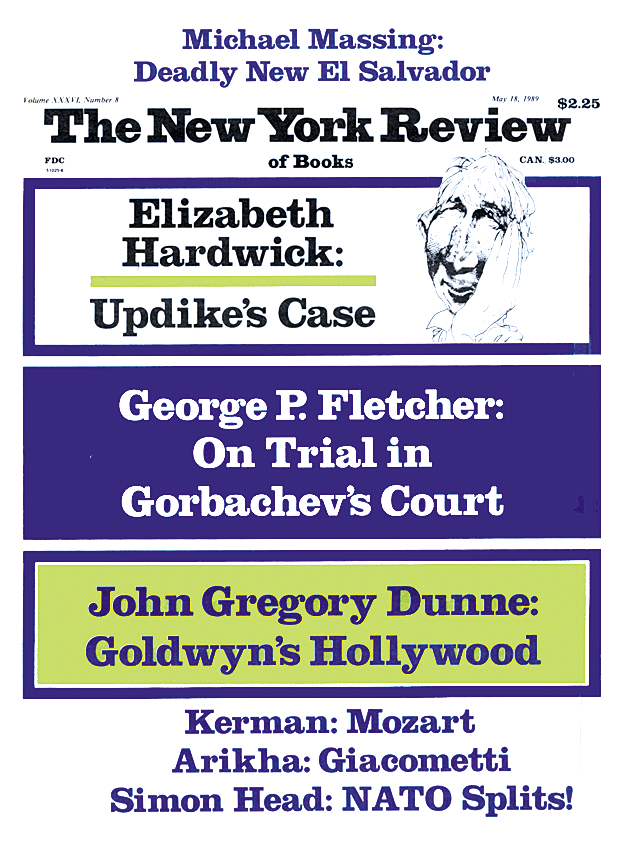 On V.S. Naipaul: An Exchange

The French Revolution: An Exchange

Could the French Have Won?