In July this year, in the midst of far, far more important developments, such as NATO’s London Declaration, the 28th Congress of the Communist Party of the Soviet Union, and the Stavropol accord giving Soviet approval to the full sovereignty of a united Germany, Anglo-German relations suffered a little shake. The first part of this little shake was an interview given to The Spectator by Britain’s then secretary for trade and industry, Nicholas Ridley, in which, after lunch, but just one glass of wine, Mr. Ridley talked about the proposed European Monetary Union as “a German racket designed to take over the whole of Europe,” and declared that if you were prepared to give up sovereignty to the Commission of the European Communities, “you might just as well give it to Adolf Hitler, frankly.” Saltily written up by the new editor of The Spectator, Dominic Lawson, son of former Chancellor of the Exchequer Nigel Lawson, and adorned with a characteristically vivid cartoon by Nicholas Garland showing a schoolboy-like Mr. Ridley daubing a poster of Chancellor Kohl with a Hitler moustache, this “outbreak of the Euro-hooligan Ridley,” as the normally restrained Frankfurter Allgemeine Zeitung described it, caused a political storm and the resignation of Mr. Ridley.

The second part of this little shake was the publication in The Independent on Sunday and Der Spiegel of a leaked, highly confidential memorandum of a meeting between Mrs. Thatcher and a small group of historians held at Chequers, the prime minister’s country residence, on March 24, to discuss Germany.1 The memorandum, which I had not seen until its publication, although I participated in the Chequers meeting, was written by Mrs. Thatcher’s influential private secretary for foreign affairs, Charles Powell. “Ver-bloody-batim” was how one British minister reportedly described this singular document. But ver-bloody-batim is precisely what it was not. Rather it was a report, with no views attributed specifically to anyone, but some by implication to all. And like all good Whitehall rapporteurs, Mr. Powell managed to flavor this rich cream soup with a little of his own particular spice.

One sentence was especially rich:

Some even less flattering attributes were also mentioned [at the meeting] as an abiding part of the German character: in alphabetical order, angst, aggressiveness, assertiveness, bullying, egotism, inferiority complex, sentimentality. [sic]

Well, perhaps in the course of a long discussion those attributes were mentioned by some participants, along with many more positive ones. But plainly they were never listed like that by anyone, nor, indeed, was there anything like a collective view of “the German character”—if such a thing exists. Still, as one might expect, this was the sentence that made the headlines, whether in London, Paris, or Frankfurt.

What really happened was this. Mrs. Thatcher invited six independent experts on Germany to give their views. Besides two leading American historians of Germany, Fritz Stern of Columbia University and Gordon Craig of Stanford, there were four British historians and commentators, Lord Dacre (Hugh Trevor-Roper), Norman Stone, George Urban, and myself. This was no ideological cabal. The guests had different views on Germany, and different views on Europe. Thus, for example, Norman Stone is a member of the Bruges Group, named after Mrs. Thatcher’s Bruges speech, and opposing further steps of federal integration in the European Community, while I have repeatedly criticized Mrs. Thatcher for not going further in that direction. Fritz Stern is well-known to readers of The New York Review not only as an outstanding authority on German history but also as an outspoken defender of the “L word.” All spoke their own minds. Fritz Stern said nothing that he has not said already in his published work; 2 I said nothing that I have not said in mine.

Yet the most remarkable feature of this quite diverse group was the degree of unanimity that emerged in answering the central questions of whether and how Germany has changed, and what we might expect from the new, united Germany. As the main body of Mr. Powell’s memorandum fairly indicated, the weight of the argument was over-whelmingly positive. We explained why 1945 was a great caesura in German history. We described how, self-consciously, but increasingly self-confidently, the democratic West Germany differed from its predecessors; and how the unification of Germany in one democratic state, bordering on East Central European states that were also choosing their own governments, was a development heartily to be welcomed. And we argued that it should be, precisely, welcomed.

Of course concerns were also expressed about this new Germany. Historians will always find continuities as well as discontinuities. But almost every doubt or question that was raised by the guests around the Chequers table could also have been heard in Bonn, from distinguished German historians, commentators, and, indeed, leading politicians. For as several participants pointed out, one of the signal strengths of West Germany has been its capacity for constant, relentless, sometimes almost masochistic self-examination and self-criticism, soundly based on a strong, free press and an exemplary critical historiography. Neither Japan nor Italy, nor indeed Austria, could match this. Thus I think it is fair to say that if Chancellor Kohl himself had sat in on that meeting, he would have agreed with, or, at the very least, accepted as fair comment, 90 percent of what was said around the Chequers table.

For a private, no-holds-barred, brain-storming session, that is not a bad percentage. After all, everyone, but everyone, speaks slightly differently about his neighbors than he does to them. Auden says somewhere that if men knew what women said about them in private, the human race would cease to exist. The same might almost be said about the nations of Europe, and the European Community. (Men as much as women, of course.) If we had a completely frank account of, say, President Mitterrand’s discussions with some French intellectuals on this issue, would the score even be as high? Or, for that matter, of a comparably frank discussion between Chancellor Kohl and some German specialists about Britain?

The remaining 10 percent was as much a matter of style as of content, of tone rather than analysis. This was, of course, the problem a fortiori with Nicholas Ridley’s remarks, as presented in The Spectator. As it happens, Mr. Ridley’s analysis was wrong. (If there is a danger, it is not Germany’s commitment to further West European integration but rather a weakening of that commitment as a result of the new possibilities opening to the east.) But even if he were right, he would have been wrong for the way he said it. I have thought a good deal about this particular British tone and style in discussing Germany and Europe, a tone and style reflected outrageously in Mr. Ridley’s remarks, somewhat also in The Spectator’s presentation of them (the Boy’s Own cartoon of Kohl daubed as Hitler, the almost light-hearted spirit of the interview), but also, to a much more limited degree, and in a more defensible way, in the personal spice of Mr. Powell’s memorandum.

I am told this is a matter of age and personal experience, and no doubt it is easier for someone of my generation, born after the war, to come to like and admire present-day Germany, and to make friendships unburdened by the past. Yet the generation gap does not quite account for this peculiar British tone, a unique mixture of resentment and frivolity. This may, I think, partly be explained by geography and history. America is far enough away, and still big and powerful enough, to be relaxed about the reemergence of Germany as a great power in Central Europe. France (let alone Poland) is too small, and relatively too weak, to be anything but deadly serious about it. But Britain is somewhere in between: close enough to be worried, and weak enough to be resentful (“Who won the war anyway?”), yet also far enough away, and still self-confident enough, to be outspoken and outrageous.

This slightly resentful insouciance is, like so many national weaknesses, the flip side of a strength. With a few notable exceptions, most German political speeches and commentaries are still so earnest, learned, scrupulous, and responsible that they are better than any sleeping pill. British political speeches and commentaries, by contrast, are still often amusing, original, and uninhibited—to a fault. But the fault in this case was a very serious one.

It is not just that it is profoundly offensive to the leaders and people of a democratic Germany to paint Hitler on the wall (or on the remnants of the Wall). It is also consummately counter-productive. Such sauce does not make the meat of substantive criticism more interesting. It means that the whole dish is pushed away. It does not mean that Britain’s voice is listened to more attentively in the counsels of Europe. It means that it is listened to even less.

In a sense, the July crisis was just another chapter in a much longer story: the story of how numerous responsible British policy makers, including successive foreign secretaries, have worked extraordinarily hard to produce a positive yet still distinctive British contribution to the development of Europe, and how this work has again and again been frustrated. There are many reasons for this frustration, in the EC itself, in the legacy of past mistakes, in the Labour party as well as the Conservative party, but some of the responsibility must plainly lie with Mrs. Thatcher. The buck stops there. A large part of this most persistent problem lies in that 10 percent region of tone and style: in the failure to find a distinctive language of British Europeanism, a language in which criticisms do not automatically become accusations and praise does not sound like blame.

The very fact that Mrs. Thatcher invited six independent experts for a day’s seminar, and listened, shows a genuine wish to come to a serious, informed judgment on these extraordinary developments in the center of Europe, and hence to find an appropriate response to them. There are those, including some in Bonn, who say that her interventions on these issues were more obviously measured, informed, and helpful in the second quarter of 1990 than perhaps they were in the first. Yet the effect of the leaked Powell memo, coming on top of the Ridley affair, was to set things back once again.

Chancellor Kohl took it all very sportingly, saying that Mr. Ridley was not the only person to have made tactless remarks, and recalling his own gaffe a few years ago, when he compared Gorbachev to Goebbels. In Britain, an investigation was ordered into the source of the leak. Few thought the culprit would ever be found. Questions were asked in the House of Commons. The prime minister defended Mr. Powell. The foreign secretary invited Hans-Dietrich Genscher, the German foreign minister, to the Glyndebourne Opera. Then the Germans went on uniting and the British went on holiday. 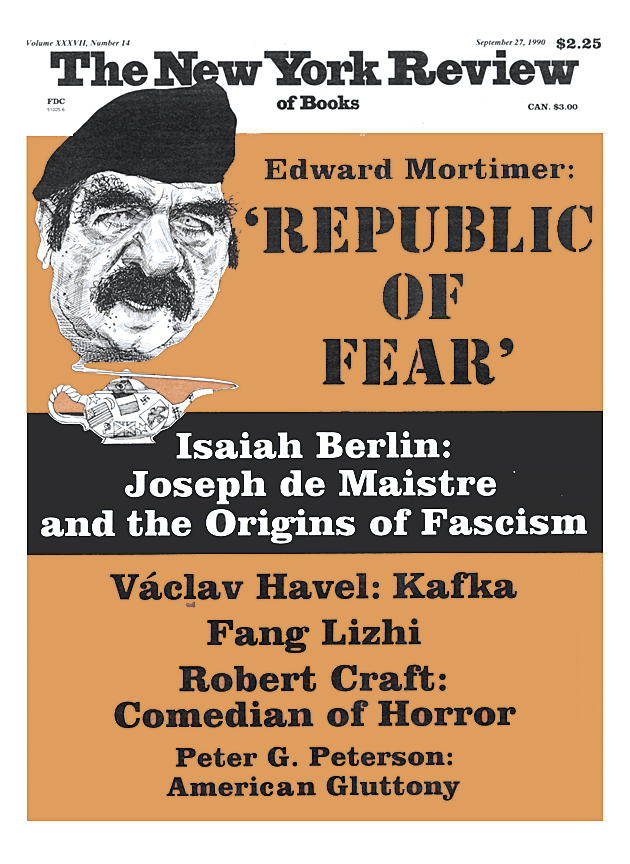 Time for a New Liberation?

Central Europe had its revolution in 1989. What it needs now is a great reform.

Time for a New Liberation?

Central Europe had its revolution in 1989. What it needs now is a great reform.

Timothy Garton Ash is Professor of European Studies and Isaiah Berlin Professorial Fellow at St. Antony’s College, Oxford, and a Senior Fellow at the Hoover Institution, Stanford. A new edition of his book The Magic Lantern: The Revolution of ’89 Witnessed in Warsaw, Budapest, Berlin, and Prague will be published this fall.  (October 2019)