It has become President Bush’s habit never to anoint a Supreme Court justice without announcing that once more he has picked “the best man for the job on the merits” and thus further deepening the mystery of how he found him. Mr. Justice-designate Clarence Thomas and Mr. Justice David Souter both abide curiously beyond informed criticism. Their qualities are unknown; their careers are so undistinguished as to be barren of offense; and, beyond the personal, their merits appear chiefly conspicuous for an absence of demerits.

Judge Clarence Thomas spent much of the first days of his confirmation hearings in an atmosphere that fortifies the prior impression that he is safely, if not always comfortably, on his way to being Mr. Justice Clarence Thomas. The proceedings at once arrived at, and showed no sign of descending from, the high and depressurized levels of philosophical discussion, an activity peculiarly fruitless in the absence of philosophical coherence.

Judge Thomas is being assessed as an abstraction and should look forward to welcome by the majority and no worse than resignation from the minority. He will, however, still be the puzzle that awaits a solution; and, if we don’t yet know what he will become, we may find some excuse in the circumstances that have so far kept him from knowing just who he is.

Might not his true explanation reside not in his teens, when he was segregated, but in his twenties, when he was presumably integrated? For when 1968 spread forth the path of opportunity to select young African Americans like himself, it also confined their travels to approval trips.

By 1968 the Civil Rights laws had been in force for four years, and the problems of the masses of color looked more and more intractable. The consequence was liberal despair about the old remedies and conservative disdain for any remedies at all. The emergence of black conservative spokesmen was a natural response to felt necessities in their time.

Degrees of facility in telling us about them always had their place in such black success as there had been in America; and, even now, any person of color ready to agree with us about the small deservings of the poor and the black can expect gratitude for comforting our vaguely uneasy consciences.

That is the service Clarence Thomas rendered on his approval trip; and it put him to explaining away his addresses to the Heritage Foundation and other forums hardly unique in our discourse for seldom inviting speakers unprepared to say what the audience wants to hear.

Thomas’s view of reality is no doubt more complicated than these blitherings suggested. It may indeed be tormented enough to impel him to near caricatures of the serene and the complacent. His job at the Heritage Foundation was to provide satisfaction; and his efforts at his confirmation hearings to swear how hard he had tried not to seemed almost pathetically suggestive of an inner quarrel. He had put on a mask for the Heritage Foundation; and he had to work behind another for the Senate.

The scars of the approval trip were nonetheless inescapable. He seems somehow lonelier than his ancestors had ever been. He has been carried so far from their community that, from desperation to show himself as one with the stereotyped fantasies of the Heritage Foundation, he even trashed his sister as a welfare abuser. And yet he is a man of color and no amount of condescension can abate his awareness of a wound no passage of time offers much hope of healing.

He became a Republican but still of the second class. The offices he wanted were those open to any lawyer of his endowments; but what he got was civil rights in the Justice Department and the Equal Opportunity Employment Commission. Those were black jobs and he knew it and he hated them. There have been complaints that he was less than fervid in engaging the grievances of the victims of discrimination; but then he himself was where he was as a victim of discrimination, and we ask too much if we demand excessive fervor in a job from someone who holds it in the contempt he suspected in those who wouldn’t give him better.

He knows acutely what he is, but the conditions of his rise haven’t given him enough of a chance to know who he is.

The proper test for a Supreme Court justice is not whether he or she is a liberal or a conservative. The most admirable figures in the Court’s history as in most others have been a bit of both. What is far more to the point is whether a justice cherishes and unsleepingly defends his or her role in the balance of powers.

By conscious design or not, the President’s judicial appointments are carrying us toward federal courts increasingly subservient to executive authorities national, state, and local. Presidents have lately taken to accompanying every Supreme Court nomination with the assurance that the candidate is immune to temptations toward judicial activism. That is nonsense; judges may be good or bad, and they may have different views of the authority of precedent, but all are to some degree activists. Complying with the will of the state is as activist an endeavor as resisting it. And the function of judicial review, in the most critical instances, is, if not to resist, at least to check the majoritarian will as expressed by the state.

Brown v. Board of Education was in essence an affirmation of what it is impermissible for the state to do to the citizen. Segregation was, after all, a legal entity established by legislatures and administered by governors. It was the rule of a minority by a majority; and the Supreme Court that overturned it was not legislating but telling the legislatures what the Constitution would not let them do.

What did the Miranda decision do but establish the hardly disputable principle that no policeman is licensed to entrap a criminal suspect? Even Roe v. Wade, troubling though it may be to myself, goes no further than to deny the state’s power to intrude upon a woman wrestling with a supreme private crisis. The Pentagon Papers case was won and lost on the issue of whether The New York Times could be forbidden to publish documents for no better reason than the President’s unsupported and, as it turned out, unsupportable attestation of danger to the national safety.

In every one of these cases, the Supreme Court upheld a group of citizens against the state. But now the Reagan-Bush Court has set upon the tidal shift of the burden of proof from the state to the citizen with whom it has some particular quarrel. Whatever can be certified as official from cop to president is presumed to be right until shown to be wrong by the overwhelming preponderance of the evidence; and if cop or even president fudges the truth, as each more than sometimes does, he can look forward to being taken at his word almost as automatically as he used to be.

Our constitutional structure presupposes a Supreme Court that does not docilely lift up but vigilantly governs the arm of the executive. Yet we travel step by alarming step from an independent to a supine judiciary. Clarence Thomas’s awareness of or indifference to this present danger is the great question his Senate inquisitors should have addressed. His views on one policy issue or another matter far less than his recognition that his true duty to the constitutional process is to do his part in its preservation without regard to the whims of public officials and what they may suppose to be the majority will. 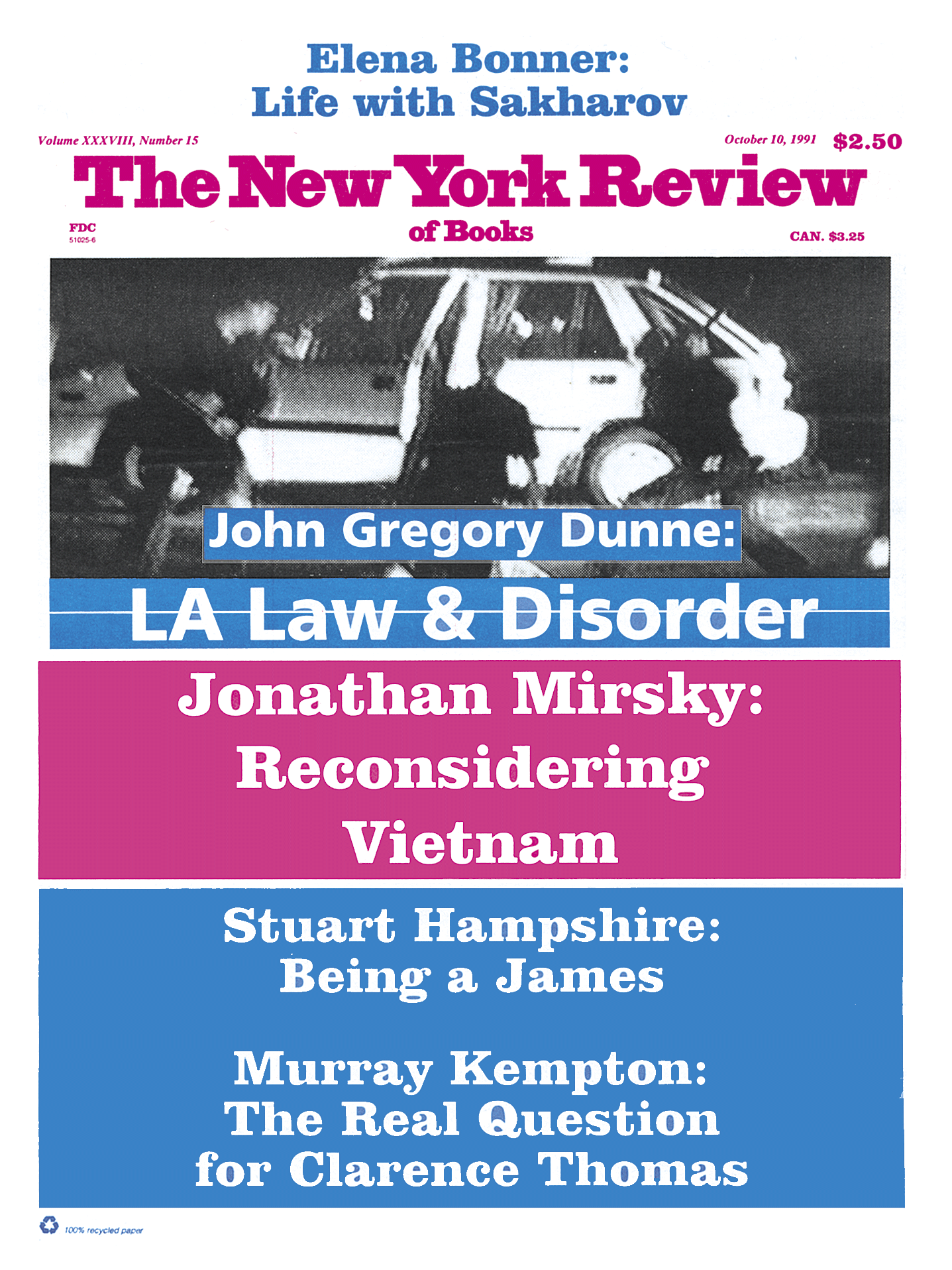