In various press articles (for example Patrice Higonnet’s “Scandal on the Seine,” NYR, August 15), then in an open letter in the form of a petition addressed to the President of the Republic, several well-known scholars have harshly challenged the architectural plans chosen for the Bibliothèque de France. Their anxieties stem from the four towers which frame the scheme and the logic of the building: the books will be exposed to great risks given the glass façades, their delivery to readers will be rendered perilous and uncertain given the multiple stack levels, and the costs of climate control in this part of the building are believed to be intolerable.

To these legitimate queries, the architect, Dominique Perrault, and the planning committee of the Bibliothèque de France have given technical and financial answers: inside the towers the books will be warehoused within a protective wall; a double system of book delivery anticipates the risks of breakdown: the cost of climate control in the towers will be less than 0.3% of the annual operating budget of the building.

These solutions can be discussed and improved, but I don’t see why they should be disqualified a priori, and why the arguments opposed to Dominique Perrault’s architectural plans should be considered absolutely conclusive. These arguments, in any case, are all drawn from an article by the American architect Philip D. Leighton, whose objections were conceived on the basis of a provisional statement and summary description of the project.

If it remains within the bounds of fairness, this architectural debate is altogether acceptable. What is less so, however, is that some of the most vehement adversaries of the Bibliothèque de France have opposed the towers as a first step toward dismantling the project in its fundamental goals. The project rests on two essential intentions: on the one hand, to guarantee under conditions which do not currently exist at the Bibliothèque Nationale the conservation, identification, cataloging and transmission of the entire printed patrimony of the nation; on the other hand, to build upon the library reserved for researchers an open library, giving to the public (and thus also to researchers) a comprehensive and readily accessible fund of information.

The numerous librarians and scholars associated with the project from the beginning have worked in the spirit of this original linkage, which would make the Bibliothèque de France an improved Bibliothèque Nationale and a new kind of public library which will greatly benefit from the proximity of the collections of the research library and from its scientific activities.

To meet the challenge of a library where two kinds of reading and use are articulated, without ever being confounded, is demanding: it is to create a large collection of freely accessible documents, distinct from those which serve research needs and constitute the national patrimony; to organize the administrative and intellectual coherence of these two collections and two spaces; and to open the library to domains of knowledge currently under-represented in the Bibliothèque Nationale, such as contemporary science. That there be a debate on the solutions proposed in order to achieve these aims seems to me altogether normal. But only in a very bad faith can it be said that the public library of the Bibliothèque de France will be a kind of Disneyland where scholars in the research library will look like strange animals in a zoo…

The decision to construct the Bibliothèque de France is a wonderful opportunity for France. It would be profoundly sad, as in all missed opportunities, if the objections to the architectural plans turn out to be the first step in a distortion or a curtailment of the project. Nostalgia born of habit or absurd fantasy should not threaten that which is, assuredly, one of the most novel and most useful of the great projects begun in these last few years. The Bibliothèque de France does not need a moratorium, as demanded by its adversaries who want to win time; it needs a truce to the polemics and fair judgments—for who can believe than those responsible for the project think that “if the books do decompose, it won’t really matter” because “books are on their way out,” as Patrice Higonnet accuses them?
Sincerely,

Chartier’s letter first appeared in the October 10 issue of Le Monde. It has already been answered by the arguments of two other essays published on the same page of that newspaper, one by an employee of the French Ministère de l’équipement, the other by Georges Le Rider, former director of the Bibliothèque Nationale. Le Rider, it should be added, together with Herman Liebaers, former president of the international association of national librarians, has circulated a petition severely critical of Perrault’s outmoded and impractical design.

His patrons in the government, however, are less sincere in their condescending dismissal of the objections raised by Philip Leighton, by general agreement the world’s foremost expert on library design. These objections are very precise. They deal with the safe storing of books, access to the library, access to the catalogs, and the relationship of the building to its site.

Perrault’s grandiose 1960s design was and remains conceptually poor. The greenhouse effect caused by storing books behind glass will be very costly to alleviate. The 0.3 percent estimate for climate control in the annual budget is unconvincing, and in any case misleading: a more informative but still unavailable figure would relate to the costs of operating the building rather than to the library’s overall budget, which includes items like salaries and book purchases.

In Perrault’s design, one third of the 17.3 acre site close to the heart of Paris lies unused or wasted on items like the vast inner courtyard ten thousand square metres in size. Usable space is also a problem in the four slim, six-sided towers. Because he initially gave no thought to protecting the books, Perrault in subsequent revisions has had to incorporate movable shutters set back two yards from the outer wall. (Current rumors however have it that the shutters will once again be given up for towers of solid steel. One wonders if the reluctance of the sponsors of the project in the French government to submit their plans to outside inspection is that they have no definitive plans at all, though excavation is already well under way.) When it was pointed out that mechanical failures could interrupt book delivery from the towers, Perrault then had to carve out yet more space for duplicate elevators and dumbwaiters. Perrault’s boasts about his “aesthetic of the void” is particularly inappropriate for someone charged with creating space to store a national treasure that cannot be replaced.

Nor are partial solutions to Perrault’s poor design very hard to find: a smaller inner garden or an extra level of underground storage could liberate the books from the towers. These, if widened at the base, could be used for public activities that are currently scheduled to go underground, such as the restaurant, meeting places for the librarians, or the children’s library.

Chartier should ponder what the sponsors themselves told Le Rider, namely that within fifty years books will no longer be printed. Electronic screens will likewise, they think, replace extant books. I know that Chartier, who has spoken eloquently about the pleasure of handling books, despises this idea. Books, as he knows, are complex tools of knowledge that present intellectual challenges through their physical layout and illustration, as even children understand. And yet Chartier now says that any scientific objections are a “first step toward dismantling the project.” But who here is dismantling what? The unstated purpose of Perrault’s shutter solution is to permit cheap conversion of the towers to office space, when books have disappeared into dust.

Is it really “very bad faith” to suggest that in this building scholars will be seen as if they were animals in a zoo? Perrault’s sketches show glass corridors on the mezzanine between the library’s two main levels underground, passages whose one and only purpose, grandiloquently described as a “parcours initiatique,” is to allow tourists to stare at scholars.

It is, moreover, silly to argue that objecting to the architectural design is destructive of the project as a whole. The need for a new building is obvious to all. Everyone approves of the library’s new computerized catalog. It’s the shape of Perrault’s building that those of us who have objected to the building don’t like; and we don’t like it because its first purpose is not to preserve books at all but to be seen from afar, with books lit up at night as they quietly disintegrate. Its design is aimed more at creating a spectacular effect than at efficient functioning.

More than four hundred scholars and intellectuals from many countries (including a Nobel Prize winner and many members of the Collège de France and the Académie Française) have signed Le Rider’s petition against the towers. Because the site of the library belongs to the city of Paris, Jacques Chirac, as mayor, ordered work there to be stopped. He even went to see President Mitterrand in order to ask him to appoint a committee of experts to decide on the merits of the building. Who could sensibly object to that? But, incredibly, all of this appears (so far at least) to have been in vain. Mitterrand’s first reaction has been to ignore objections and to confiscate the site.

We have all read Tocqueville. The bureaucratic and authoritarian continuities that link the darker side of modern France to the norms of the Old Regime are no news. But a decision simply to plunge ahead with a project objectionable to so many of France’s leading scholars would be too egregious. It is very much to be hoped that Mitterrand will, after all, prove wiser than his counselors. Last year, he ruled against storing the books in distant silos. Next, on the sensible advice of Chartier among others, I presume, he decided to abandon the plans for a twelve-theater audio-visual library. A third presidential decision could, and one hopes soon, order Perrault to reallocate the storage space for books.

In truth, Roger Chartier’s response is puzzling. Until a few weeks ago, he could claim that he had no choice but to work within a framework that wasn’t of his making. Today, things have changed. Prominent members of his own Conseil scientifique—Georges Duby and Maurice Agulhon—signed the petition that he refers to but does not address. As he himself allows, it is time now to “discuss and improve” the technical solutions required by the needs of the library. Chartier, more easily than anyone else, could work with his sponsors in the government to amend the library’s design. He should attempt to persuade Mitterrand to remove the books from the towers. His letter is not helpful; one can only hope that he will move toward the more independent position that many of his friends and colleagues would have expected of him. 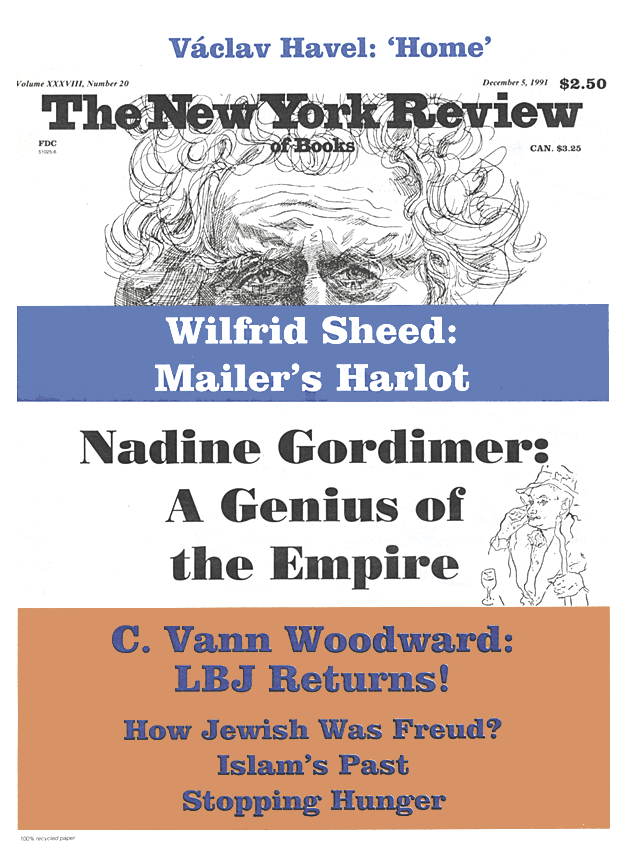 A Way to Make the National Digital Library Work: An Exchange

Scandal on the Seine

Lost History of the Lost Library