The Rediscovery of America from the June 24, 1993 issue

In his review of my book, American Holocaust: Columbus and the Conquest of the New World [NYR, June 24], J. H. Elliott does not take issue with “all the historical information” I have “so conscientiously assembled,” but rather with what he describes as my “indiscriminate use” of such words as “racism” and “genocide” in discussing the European and American destruction of the Western Hemisphere’s indigenous people.

Regarding the first of these terms, I use the phenomenon of racism in American Holocaust not as a casual insult against Euro-American thought and behavior, as Professor Elliott suggests, but rather as one of several essential components—each one taken apart and examined in some detail—of an analysis of the cultural, political, and economic forces that, interacting upon one another, produced the deaths of tens of millions of indigenous people. Noting that conventional opinion in some quarters holds that racism was an invention of the late eighteenth or the nineteenth century, I spent a good deal of time in the text demonstrating the suitability of the term to describe aspects of Western thought and behavior prior to the eighteenth century, with particular reference to the treatment of indigenous peoples. I then added ten pages of an appendix focused entirely on that topic.

Elliott makes no attempt to come to grips with or to dispute any of this material, but rather contents himself with the blithe assertion that words such as “racism” should not be used in this sort of historical context because their “powerful contemporary freight” is sufficiently “emotive” as to “impede rather than assist genuine understanding.”

Does Professor Elliott feel that way about the use of the word “racism” in the context of the Euro-American enslavement and debasement of Africans? Does he think that the use of the term “anti-Semitism” in discussing Nazi violence against Jews is so “emotive” that it “impedes rather than assists genuine understanding” of the Holocaust? Presumably not. But if not, how can he simultaneously regard as emotionally excessive the use of the term “racist” to characterize four centuries of Spanish and British and American descriptions (copiously quoted in my text) of Indians as beasts and vermin, or as an intermediate species between humans and monkeys, deserving of enslavement and/or extermination precisely because of their ascribed sub-human condition?

As for my use of the word “genocide,” Professor Elliott says it “debases” the very word to regard as genocide mass death that is caused by forced labor or introduced disease—even when such deaths occur within a larger context of military assault, as was the case throughout North and South America during the course of several centuries.

Professor Elliott’s touchstone on the matter of genocide is, as he says, the conventional one of “the Nazi treatment of the Jews.” But of course, as I point out in the text, it is now known that more Jews in Auschwitz, and probably throughout Nazi-controlled Europe, died from forced labor, starvation, disease, and other forms of what the US government today would call “collateral damage,” than succumbed to outright murder by gassing, phenol injection, hanging, or shooting.

Does Professor Elliott consider these “indirect” deaths—again, representing the majority of those Jews who perished under the Nazis—as somehow separate from the German genocide effort, as less a part of the Holocaust than the deaths of those who died in the gas chambers? If so, he will be virtually alone in his opinion among historians who have written on the subject. If not, how can he fail to recognize (especially since, as he says, “I go out of my way” to make the point) that the very same conditions prevailed in the so-called New World—from the West Indies to California—where millions of indigenous people died from forced labor, starvation, and disease that were a direct consequence of military invasion, enslavement, and systematic mass murder?

It cannot be the numbers, or the proportion of the population killed off, that makes what occurred in Europe in the 1940s more of a case of genocide than what occurred in the Americas, since both the raw numbers and the percentage of people who died were vastly higher in the New World. Nor can it be the ghastly nature of the atrocities that were carried out, since Professor Elliott himself admits that “the acts of barbarism committed by conquerors and settlers, whether in Iberian or British America, are so horrific as to be mind-numbing, even for a generation that has lived through the experiences of the twentieth century.” No, what makes the Nazi behavior qualify as “genocide,” Elliott says, in contrast with the Euro-American destruction of the indigenous inhabitants of the Americas, is that “‘genocide,’ as used of the Nazi treatment of the Jews, implies not only mass extermination, but also a clear intention on the part of a higher authority.”

Here Professor Elliott has wandered, with apparent innocence, into a thicket of ongoing scholarly controversy. The matter of “clear intention on the part of a higher authority” is one of the core points of contention in an unresolved debate that has filled many volumes for many years regarding the alleged “uniqueness” of the Nazi Judeocide campaign. If Professor Elliott wishes to enter that debate, he should do so, and not merely make grand pronouncements. And if he does choose to engage the subject intelligently, he will have to explore, among other matters: the continuing disagreements over ideology versus circumstance as motivations for the Nazis’ launching of the Holocaust; the absence of articulated genocidal intent by higher authorities in numerous cases of commonly acknowledged genocide from Burundi and Bangladesh to Cambodia, East Timor, and elsewhere; and, in contrast, the numerous public statements of genocidal intent against American Indians, during the course of three centuries, by such higher authorities as colonial, territorial, and state governors, as well as by several US presidents—statements that make Slobodan Milosevic’s talk of “ethnic cleansing” seem vapid by comparison.

But Professor Elliott apparently prefers to not trouble himself with such complexities. Indeed, the very topic of the Euro-American assault on the natives of the Western Hemisphere seems to weary him: “If it is thought necessary to rehearse these horrors yet again,” he writes “so be it, although there can by now be few who are unaware that the invasion and settlement of America by the Europeans was far from sweetness and light.”

This is the kind of comment that makes so ironic the advertisement, on the second page of Professor Elliott’s review, for three new books on the Holocaust. These, of course, represent only a small fraction of the scores of books on the Holocaust that are published each year, despite the fact that “there can by now be few who are unaware” that that event also “was far from sweetness and light.” Since Professor Elliott will have an opportunity to reply to this letter, I would like to trouble him with one more question: Does he regard the continuing stream of books on the destruction of the Jews to be as equally unnecessary as he does the far smaller number of books on the destruction of the native peoples of the Americas? Or is it simply as it seems—that he considers one group to be intrinsically more worthy than the other of historical attention and concern?

If Professor Stannard finds it illuminating to apply the terms “racism,” “genocide,” and “holocaust,” with all their twentieth-century connotations, to the world of the fifteenth and sixteenth centuries, so be it, but at least he should be consistent. I have failed to find in his book any attempt to use them of a people who regarded members of other ethnic groups as naturally inferior, and who slaughtered them ritually to the tune of up to 15,000 a year. I refer, of course, to the Aztecs. The worst he seems able to say about such practices is that we would find them “abhorrent to our cultural tastes and attitudes at present” (p. 51). No talk of “genocidal systems” here. But no doubt, as non-Europeans and non-Christians, the Aztecs are honorably ineligible for inclusion in his vocabulary of condemnation.
There must always be a welcome for books on the destruction of the Indians if they enhance our understanding of a complex historical phenomenon. Professor Stannard’s book, in my judgment, is not one of these, for the reasons I gave in my review. 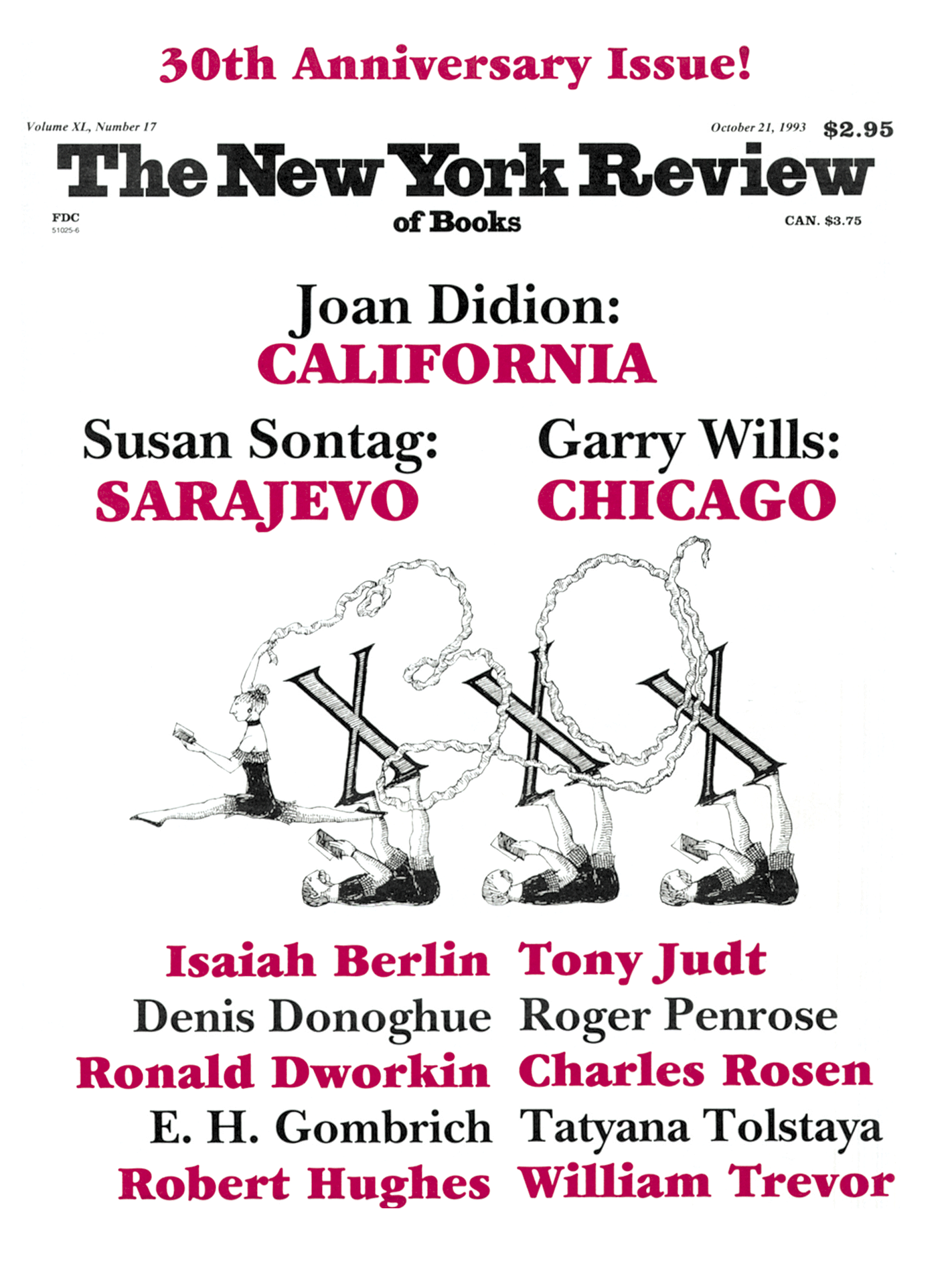 The Uses of Hell’: An Exchange

The Uses of Hell

The Illusion of Jewish Unity