Thinking about the plague in India, I turned to a perhaps surprising book, Boccaccio’s Decameron, to see why plague should be, or should have been, held in such particular horror. The Decameron is a collection of amusing, somewhat saucy, tales. But these are told by a group of young men and women who have left Florence in time of plague; if they are saucy, Boccaccio says, that is because well-bred women in those hard times would speak more freely than in a later, more strait-laced age.

And that’s the mildest of the social effects of the Florentine plague of 1348, which the author claims to have seen and of which he has a vivid account. He begins with an assertion of the plague’s foreignness: it comes, in this case, from the East. Whether its cause is a conjunction of the stars or if it is a punishment for the sins of the city, Boccaccio doesn’t claim to know.

What he does know, although he doesn’t quite put it like this, is that the bacterium mutated in the course of its progress. This ability of a disease to mutate is one of the things that scares us still. Boccaccio says that in the East the fatal symptoms were a bleeding from the nose. In Florence, at first, these were replaced by swellings in the armpits and groin. Later, and no less of an infallible sign, the disease produced bruises and dark blotches over the arms and thighs and other parts of the body.

So the plague was a disease that didn’t stay still. It grew in viciousness as it went. And it changed its symptoms.

The next source of horror was its speed—three days or less between the onset of symptoms and death. Then there was the contagiousness. Boccaccio claims to have seen pigs come into contact with the rags of a pauper who had died of plague; they started to writhe as though poisoned, then dropped dead “spread-eagled on the rags that had caused their undoing.” So speedy death for man, instant death for animals.

Then there was the intellectual hopelessness of the attempts to deal with plague. Some people resorted to isolation and austere living; some to singing and merry-making and all sorts of excess. The latter group we might say coped with the crisis by means of denial. They sought out houses where conversation was “restricted to subjects that were pleasant and entertaining,” and these places became like common property. You went in and you helped yourself to whatever was on offer.

Another group thought the plague was more likely to punish you within the confines of Florence itself, so they sought to leave the city, or better still Florentine territory. But Boccaccio notes that many of these died without assistance. In fact, none of the groups came up with a theory that seemed to increase the chances of survival.

Boccaccio does not dwell on the physical details of the plague. What excites his horror far more is the effect on the morals and customs of the people—the fact that a woman, however well bred, would on becoming ill raise no objection to being attended by a male servant. This had never been known before, but the sudden servant shortage forced it upon women who, if they did survive, tended to become less chaste in the aftermath. They had shown their bodies to men.

This was one of the effects on women. Another was that they gave up their traditional role of gathering in neighbors’ houses to lament the dead. For the first time, people were dying alone and unmourned, something we have to think about a little to get the savor of its shocking implications. One has to feel one’s way back into a world in which ritual was exceedingly important. (Those women mourning the dead Christ in pictures and sculptures of the time are very much like the neighborhood women coming in to perform this function.)

more often than not bereavement was a signal for laughter and witticisms and general jollification—the art of which the women, having for the most part suppressed their feminine concern for the salvation of the souls of the dead, had learned to perfection.

So the plague was frightening because it produced a frightening kind of heartless and immoral woman.

Boccaccio does not mention what might strike us as among the most terrifying of the products of the plague in Florence—the becchini, who were a sort of plague-terrorist. They would break into your house and threaten to take you off with the dead unless the men gave them a bribe and the women surrendered their virtue.

The most shocking things for Boccaccio are, for instance, funerals with no more than ten or twelve neighbors in attendance, funeral biers being made of bare boards, and the sight of more than one corpse on a bier.

And times without number it happened that two priests would be on their way to bury someone, holding a cross before them, only to find that bearers carrying three or four additional biers would fall in behind them; so that whereas the priests had thought that they had only one burial to attend to, they in fact had six or seven, sometimes more.

Reading such details, I remembered suddenly how in the old houses of Florence there was a small door to one side that was used exclusively for the removal of coffins—the architecture itself was made to accommodate the rituals. While one is not at all surprised to find Boccaccio horrified at, say, the practice of disposing of the dead in a communal pit, what the plague attacked in a city state such as Florence was the whole ritual basis of daily life. It struck at the most sacred relationships of family:

This scourge had implanted so great a terror in the hearts of men and women that brothers abandoned brothers, uncles their nephews, sisters their brothers, and in many cases wives deserted their husbands. But even worse, and almost incredible, was the fact that father and mother refused to nurse and assist their own children, as though they did not belong to them.

Half of Florence died, but it is not so much the numbers involved that affects Boccaccio as the prospect of civil life itself fatally endangered. This is the trace that the plague has left on our imaginations and in our folklore. This is why the plague is not one of many epidemic diseases, but the disease of all diseases, the disease that could destroy a city, its rituals, its morality—every measure by which it reckoned its own worth. 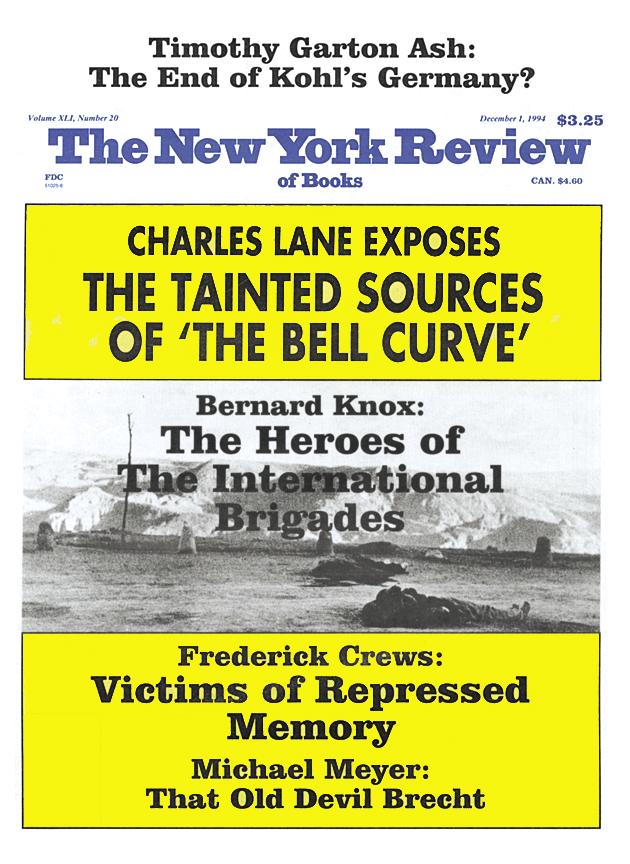 Which Thucydides Can You Trust?

‘Here We Are In Egypt’