All the short stories but one in Mavis Gallant’s 887-page collection were published in The New Yorker, the first of them in 1953, the last in 1995. They come with a warning issued in the author’s characteristically laconic manner: “Stories are not chapters of novels. They should not be read one after another, as if they were meant to follow along. Read one. Shut the cover. Read something else. Come back later. Stories can wait.” But the reviewer can’t: so it is difficult for him or her to do full justice to all fifty-two of them, though easy to recognize straight away that some are perfect—meaning that they work perfectly, without waste or overkill, their pathos creeping up stealthily to deliver a fierce pluck at one’s feelings. Some are very short; some are novellalength; and some are grouped together in fours and fives around the same central characters.

One of these series, “Linnet Muir,” is about a girl growing up in Canada, and reads like a fictionalized autobiography. A linnet is a bird, and Mavis is another bird—a thrush; it must be a clue. Except in this series, Gallant’s tone is usually matter-of-fact and resigned—expecting nothing, accepting what comes. All the stories are sharply funny from time to time, and some of them—not many—all the time. All are about time passing, and almost all are about losers.

Gallant thinks all the time about time passing. If one played a game to find her most characteristic sentence, the winning answer might be “That winter Mollie grew breasts.” Most of the stories are arranged in chronological grouping according to the period they are set in, which often coincides with the time they were written, but allows for extensive flashbacks. The sections are headed “The Thirties and Forties”; “The Fifties”; “The Sixties”; “The Seventies”; “The Eighties and Nineties”. Time does not pass like waves rolling, or melt into a blur, and it certainly isn’t shaped by Gallant’s own nostalgia. What nostalgia there is belongs to the characters, not the writer. Her subject is what time—or history—does to people, how it pushes them around and turns even potential winners into losers.

Time is the Depression, the Second World War, the political and economic upheavals that followed it, the changed social conditions which overrun people who can’t easily adapt. She writes about English and American expatriates on the Riviera, about British remittance men (“RMs”) in pre-war Canada, about déclassé aristocrats in sunless Parisian flats, about failed artists and writers, about Sixties hippies stranded in the hardheaded Nineties, about refugees, exiles, taxexiles, concentration camp survivors, immigrants, German ex-prisoners of war returning late to nothing much, and about ghosts—themselves evocations of time past. She can do all the voices: all the accents and intonations, English, American, East European, German, French; and all the vocabularies, teen-age to senile, trendy to dinosaur, classy to classless, revealing provenance, period, social condition, state of mind. It is calmly done, built into the narrative, with no virtuoso display.

The voices tell the time, and they can do it even at two removes: “The room became so quiet that I could hear the afternoon movie on television in the next room. I recognized the voice of the actor who dubs Robert Redford.” A time signal. The narrator’s voice belongs to Edouard, a French television script writer who has just been given the légion d’honneur for “cultural enrichment of the media.” We are in the Eighties, and he is visiting his first wife, Lena, in hospital. Lena is almost as old as the century. They met in 1941, when he was twenty-two and she was thirty-six, a fascinating, feckless Hungarian Jewish poule de luxe flourishing in Paris. He married her to save her from the Nazis, then escaped to England to join De Gaulle and met Juliette. She was eighteen, and terribly bien élevée, living in London with her horrible mother; her father, a French colonel, had disappeared in the Resistance. Juliette would have liked Edouard to marry her, and he “wanted to get her out of her loneliness.” No more than that.

Now Juliette is dead and Lena has Alzheimer’s. She ruined Juliette’s life by refusing to divorce Edouard until Juliette was too old to have children—a predicament that was on the verge of extinction when the strictly broughtup colonel’s daughter had to face it: another time signal. Now in her dotty seventies, Lena gazes adoringly at Edouard. He recognizes her look, but refuses to return it. That’s as far as his vengeance goes. The story—“Lena”—is a good example of Gallant’s oeuvre: sad, resigned, unvindictive. It is not just a genre picture built up from sensitively chosen, gritty details, but a story with fully imagined characters and a plausible story line whose turning points hinge on recent history.

The preoccupation with time is shared by the heroine of the earliest story in the collection. “The Other Paris,” published in 1953. A naive American girl of twenty-two works for an American government agency in Paris after the war. She gets engaged to an older man in the same organization. “The fact that Carol was not in love with Howard Mitchell did not dismay her in the least. From a series of helpful college lectures she had learned that a common interest, such as a liking for Irish setters, was the true basis for happiness, and that the illusion of love was a blight imposed by the film industry, and almost entirely responsible for the high rate of divorce.” (If this sounds almost too New Yorker-ish, simultaneously sharp and laid-back, one has to remember that it was written when Gallant was just beginning her long career with the magazine.) Carol meets a young Austrian refugee—the lover, as it gradually turns out, of Howard’s impoverished, middle-aged, badly dressed, but upper-class French secretary, Odile.

That night, before going to sleep, she [Carol] thought about Felix, and about how he was only twenty-one. She and Felix, then, were closer in age than he was to Odile or she herself was to Howard. When I was in school, he was in school, she thought. When the war stopped, we were fourteen and fifteen…. But there she lost track, for where Carol had had a holiday, Felix’s parents had been killed.

At a concert, Howard and Carol are snubbed by Odile and her family. Nouveau-poor though they may be, and dependent on her salary from the Americans, they do not consider American agency staff to be socially acceptable, and they keep their distance. Felix witnesses the snub. He knows that, for other reasons, he is not acceptable either. “No admission for us foreigners,” he says to Carol; and Carol is outraged and upset by this offer of solidarity.

Gallant is an expert on snobbery at a cosmopolitan level, observing, in very different milieus, the social layers sliced thin as tissue to go under her microscope. She grew up bilingual in middle-class Montreal, and bidenominational too, a Protestant child sent to a convent boarding school. Afterward she traveled all over Europe before settling first in the south of France, then in Paris, where she has lived ever since. Snobbery is usually a subject for comedy, even for Proust; Gallant sees its pathos, though the comedy is there too. Status of one kind or another is what the disinherited cling to. In “Questions and Answers,” three elderly Romanian exiles in Paris with their heads only just above the waterline keep reminding themselves and others that they are purely “Latin”—nothing Slav or Greek or Levantine about them. In “The Ice Wagon Going Down the Street,” Peter and Sheilah Frazier have the Frazier name for support, which was big in Canada two generations ago; and they have “the Balenciaga.”

It is a black afternoon dress, stiff and boned at the waist, long for the fashions of now, but neither Sheilah nor Peter would change a thread. The Balenciaga is their talisman, their treasure; and after they remember it they touch hands and think that the years are not behind them but hazy and marvelous and still to be lived.

They are airheads, sentimental with the sentimentality of a Noel Coward hit song. They bought the Balenciaga fifteen years ago in Paris just after the war, when Peter was going to make a pile in Europe, sure of being offered prestigious jobs on the recommendation of powerful men who would recognize and be impressed by the Frazier name. No one could recall what it meant, and he never got beyond being a filing clerk, first in Geneva, then in Hong Kong, Since the Hong Kong job ended, they have lived with their two children squashed into a tiny flat in Toronto belonging to Peter’s unmarried sister, who has to sleep on a camp cot in the hall. They have no prospects at all.

Canada is always a place to get away from. Perhaps that is why the stories about Linnet Muir seem the least satisfactory, too close to the bone. The childhood episodes contain the only passages where compassion for the central character (Gallant herself?) teeters on the brink of soppiness—though it never quite falls over; and when eighteen-year-old Linnet escapes to New York she becomes almost too triumphalist and perky to retain one’s sympathy. Occasional reflections on the lives of girls can sound as if they come from an advice column, and Gallant’s feminism expresses itself, here and in one or two other stories too, in a furious indictment of dresses with boned waists.

If I had to select one story, it would be “The Remission.” It is the most typical as well as the most moving. Alec Webb, a youngish, dullish Englishman with an incurable disease, moves to the Riviera to die, bringing his wife and children with him. His neighbors are a collection of comic types—proud gentlewomen, gardening freaks, bounders, bit players, English and American. They are not from central casting though, or even from the pages of Somerset Maugham: they are far more subtle and funnier than that. Their snobberies collect triumphs and rebuffs as busily as ants collect pine needles.

Alec takes longer to die than expected; the money runs out; the servant has to be dismissed; the children feel oppressed and humiliated, the elder boy enraged, the younger abstracted, and the thoughtful, conscientious fourteen-year-old girl (who grew breasts the year before) sad and guilty, because she has unwittingly brought Wilkinson, the bit player, into her mother Barbara’s life.

Barbara is dutiful and sits all day in the hospital with Alec when he becomes too ill to be nursed at home. But she has fallen in love with Wilkinson, who is as mindless as she is herself. The children know she is sleeping with him. At Alec’s funeral, when at last the time for it comes,”…Barbara began in the most natural way in the world to live happily ever after. There was nothing willful about this: She was simply borne in a single direction…. It then happened that every person in the room, at the same moment, spoke and thought of something other than Alec. This lapse, this inattention, lasting no longer than was needed to say ‘No, thank you’ or ‘Oh, really?’ or ‘Yes, I see,’ was enough to create the dark gap marking the end of Alec’s span. He ceased to be, and it made absolutely no difference after that whether or not he was forgotten.” This is the end of the story, and it too is hard to forget. 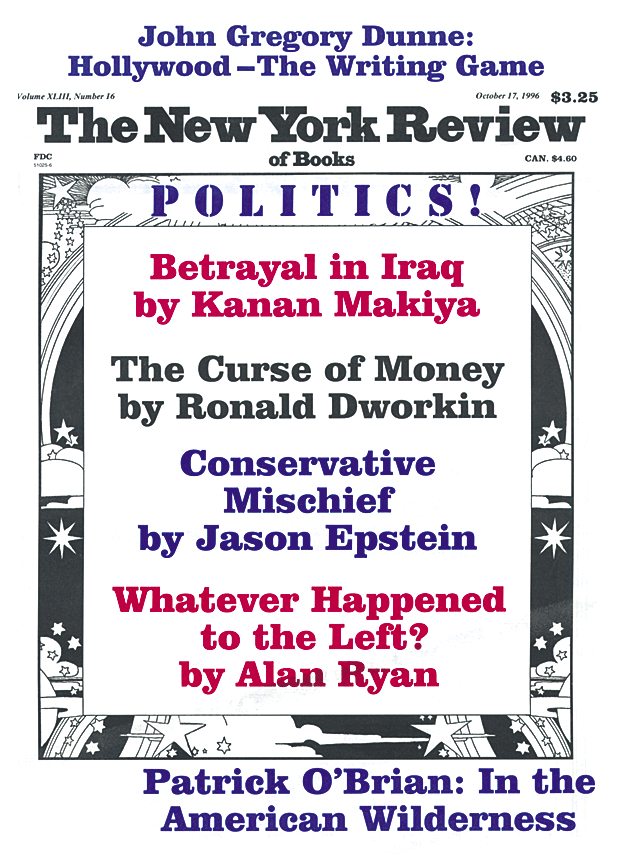