'In the Palace of Nightmares': An Exchange from the January 15, 1998 issue

My first reaction after reading the letters column in your issue of January 15, with its exchange between the despicable Ismail Kadare and the estimable Noel Malcolm, and then rereading Mr. Malcolm’s article on Kadare (“In the Palace of Nightmares”) in your issue of November 6, 1997, was “How very Balkan!”

Let me explain myself. In his review of The Three-Arched Bridge, a book by Kadare, an Albanian and therefore Balkan author, Mr. Malcolm, who has emerged as the leading international journalist on the recent Balkan wars, referred to and by his lights refuted an essay, on the same book and on Kadare himself, that was published by me in The Weekly Standard last year.

I hope I will be excused for some pride in also considering myself an expert on certain Balkan topics. Most recently, I spent the month of September 1997 in Bosnia-Hercegovina, as one of a two-member team assigned by the Council of Europe and the International Federation of Journalists to evaluate the state of the local media in both zones of that tormented country, in a report soon to be published.

This concatenation of personalities points to the Balkans, but what gives the whole matter the true flavor of a Balkan stew requires more elucidation.

First: In his original review, Mr. Malcolm alluded to my critique either five or six times, depending on how one counts.

Once, he cited its subhead, “Don’t Give the Nobel to an Albanian Party Hack.”

Then, he referred to my characterization of Kadare as “in The Weekly Standard’s words, an Albanian party hack.”

Next, he quoted my critique of Kadare’s General of the Dead Army by saying the book was “[a]bsurdly described by The Weekly Standard’s critic as ‘a deft execution of the Stalinist genre of socialist realism.”‘

Further on, he again defended Kadare against the charge that he was an “Albanian party hack,” and condemned “the crude alternatives of party hack vs. persecuted rebel,” which Mr. Malcolm said had “warped the judgment not only of Kadare’s critics but also of [Kadare]himself.”

And finally, according to Mr. Malcolm, “Nobody who reads The Palace of Dreams, one of Kadare’s greatest works, could possibly accept the dismissive judgment of him as a party hack.”

Curiously, however, none of these several references was seen by your editors as requiring that my name be mentioned or that my article be cited by its actual title or with its date of publication. To be specific, my article, “Ismail Kadare’s Prize Fight,” appeared in The Weekly Standard for March 24, 1997.

The publication of a long polemical article in which one’s opponent is targeted by allusion and never mentioned by name is extremely Balkan, but it is also extremely Stalinist.

The need for a clarification on this may, however, have been made moot when, in your January 15 issue, both Kadare and Mr. Malcolm decided to use me as a straw man which each could profitably knock down at the expense of the other. This was a detail even more Balkan than the exercise in semi-anonymous polemics that preceded it, for in the Kadare-Malcolm exchange I was not only mentioned by name, I was repeatedly attacked, still without anybody noting the title or date of publication of my work, or anything else about my article, except that I had called Kadare a “party hack.”

In fact, Inever used that phrase myself, and I do not write my own subheads in national magazines. But it is a fair characterization of my opinion of him. On the other hand, neither Kadare nor Mr. Malcolm addressed any of the substantive issues on which I have criticized Kadare, having to do with cultural policy under the Hoxha dictatorship and Kadare’s involvement in such.

Kadare declared in his letter that I am the author of a “hateful pamphlet,” the title of which he misrepresents as “Don’t Give the Nobel to an Albanian Party Hack!” with an added exclamation point that was absent from the original. He then stated that I have published “these frenetic and unethical outcries every year as the prize approaches.”

This is untrue. I have published three critical articles on Ismail Kadare: twice in the Albanian Catholic Bulletin, an obscure but prestigious religious periodical, in 1993 and 1994, and once in The Weekly Standard, in 1997. The Albanian Catholic Bulletin is unknown to the non-Balkan public but has considerable credibility with Albanians, which must have upset Kadare immensely. But to turn three articles over five years, only one of them directed to a broad public, into an annual crusade, much less frenzy, is ridiculous. And while there is nothing unethical about such criticism on my part, I consider it hilarious that Kadare, a paid functionary of one of the worst dictatorships of modern times, should have the nerve to cite ethics of any kind in his defense.

Kadare also called my article “grotesque,” and its vocabulary “insolent,” and finally assimilated me to Mr. Malcolm as a “colonialist” and “racist.”

Mr. Malcolm, responding to Kadare in turn, relabeled my arguments as “absurd,” while once more taking pains to dissociate his views from mine.

Now that the authentically Byzantine twists and turns of this affair are fully exposed to the light of day, please let me express the following to you, to Mr. Malcolm, to Kadare, and to your readers.

Mr. Malcolm has a right to his opinion. He likes Kadare’s work; I don’t. He believes that Kadare’s skill as an author outweighs his compromises with Hoxha; I don’t. Mr. Malcolm is a serious journalist who has made a considerable study of Balkan culture. But he is not infallible; nor, of course, am I. Critical opinions in literary matters are always individual.

This is all very silly. I did not mention Mr. Schwartz’s name in my original review for two simple reasons. First, because his personal identity was of no relevance to the point I was making: Iwas merely taking his article as an example of a current attitude toward Ismail Kadare. And secondly because, given the crudity of some of the misjudgments in that article (such as his characterization of The General of the Dead Army as a typical piece of “social realism”), Ireally thought I was doing a favor to Mr. Schwartz by keeping his name out of my review.
My desire to deal leniently with him in this way was partly prompted, I am happy to admit, by my own feelings of admiration for the principled stand he has taken on Bosnia during the last six years. But someone should explain to him that an interest in Bosnia, however actively pursued, does not (contrary to the non sequitur about this in the first part of his letter) confer any expertise in the interpretation of Albanian literature. My admiration for him, meanwhile, has waned somewhat after reading his long and self-important letter. He is of course entitled to respond to some of the wild remarks made about him by Mr. Kadare. But his comments on my original review exhibit both egomania (he seems to think that the whole review revolved around him; it did not) and a gross devaluation of language. If referring to a magazine article by the title of the magazine is to be described as “Stalinist,” what word will then be left to us for the description of show trials, gulags, and mass murder? 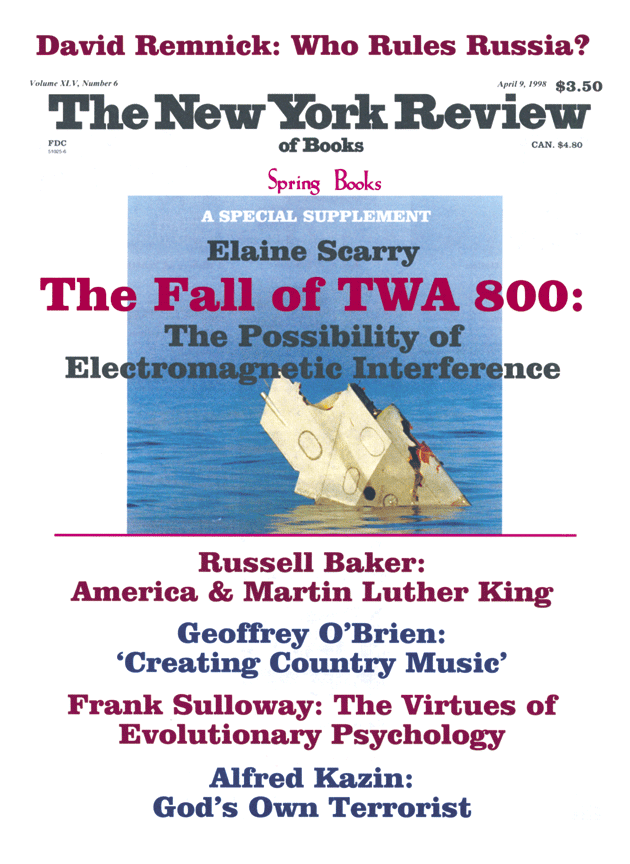 A Night at the Palace

The Case of the Canned Lawyer

‘In the Palace of Nightmares’: An Exchange

The Two Conversions of Malcolm X

In the Palace of Nightmares

Rumors of a Coup

The Pilgrimage of Malcolm X

Malcolm X’s dramatic life, and his insistence that the most disadvantaged play a part in their own emancipation, exert a strong pull on his many biographers.