a film by Steven Spielberg

The persistent theme of Stanley Kubrick’s movies is the obsessiveness of the human attempt to control the future—one’s own or the world’s—and the complicated ways in which that attempt fails. Fixated lovers (Lolita), solitary rogue-adventurers (Barry Lyndon), grandiose novelists (The Shining), nuclear strategists (Dr. Strangelove), military trainers (Full Metal Jacket), all the way down to the picture-perfect couple whose model of domestic joy is elaborately dismantled in Eyes Wide Shut: they are all there to enact some version of The Control Freak Brought Under Control, the story of the inventor who invents his own doom, the entrapper who maneuvers himself into someone else’s trap.

That the obsessive patterns within his films were mirrored by Kubrick’s own slow and perfectionist filmmaking process is no secret. A.I. (or, alternatively, Artificial Intelligence), one of the most elaborately developed of his unrealized projects, had been in the works since the early Eighties; it was announced as his next film after Eyes Wide Shut, but with Kubrick such forecasts frequently went unfulfilled. One of his consultants on the project was Steven Spielberg, whom he at one point proposed should direct the film with Kubrick as producer. Following Kubrick’s death, Spielberg took it upon himself to bring the movie to fruition, rewriting the script but evidently preserving the essential structure already laid down. The idea of Spielberg serving as a medium enabling Kubrick to make one last movie, or at least a simulacrum of a last movie, has a curious symmetry with the movie’s notion of artificial intelligence preserving humanity beyond its own extinction. Spielberg’s films have often been concerned with the idea of rescue, whether of endangered people or endangered childhood dreams. Saving Stanley Kubrick might be this movie’s alternate title, raising again the question of what finally can be saved, and for whom.

The movie’s source, a story by the science-fiction writer Brian Aldiss, hinged on the plight of an android endowed with the capacity to love but not the capacity to understand why his adoptive human mother fails to love him back. In A.I. the android is David, an experimental prototype who is given to a couple as a substitute for their own ailing, cryogenically frozen son. We are in a world transformed by global warming, where the surviving humans exercise strict population control and supplement their diminished numbers with a virtual slave class of intelligent “mechas,” but the household where David comes to live scarcely differs from the suburbia of E.T., except that everything is a bit more sour.

The domestication of the robot child serves as a demonstration—unsentimental, and without facile caricature—of the way in which adults can use children for their own emotional gratification. In culmination, the desperate mother takes the irreversible step of activating David’s capacity for love. The ritualistic quality of the scene—she reads a prescribed list of random words while maintaining eye contact—recalls the drinking of the love potion in Tristan and Isolde, except that it’s a one-way process: only the mecha child comes under the spell. The scene’s real horror (it’s worthy of Kubrick’s The Shining) resides in the absence of magic. Love, for A.I.’s purposes, is an involuntary emotional imprinting, as cold as any other form of software programming. There is no suggestion that David’s feelings will grow richer or deeper, merely that an unvarying fixation on his mother will henceforth be part of his makeup. He becomes a machine for unfulfilled longing.

All this is prelude. In short order the real son, defrosted and healed, is brought home, and proceeds with deliberate malevolence to undermine the position of his mechanical sibling. Cast under suspicion, David is driven into the forest by his mother and abandoned with only a talking teddy bear—an earlier, more rudimentary form of artificial intelligence—for company. The Disneyish echoes are quite deliberate; the movie will soon become a series of variations on Pinocchio, with a full complement of violent misadventures and chaotic carnivals, and comic relief provided by Jude Law as an android gigolo with his own built-in soundtrack of Bing Crosby and Fred Astaire recordings.

The emotional resonance is, however, constantly undercut. Every feeling that we’re tempted to invest in David’s fate feels displaced; we follow the adventure of an “I” which is not really an “I”; he’s not a human but a digitalized archive of human possibilities. If he seems better than the humans—whose emotions are in varying degrees thwarted, conflicted, misguided, or downright malicious—it’s in the same way that a work of art might be construed as better than life. He’s a product of design, nothing more. What, after all, is David but a highly evolved special effect in a Steven Spielberg movie? The fact that he’s played by a human actor (Haley Joel Osment, the twelve-year-old star of The Sixth Sense) is beside the point; in this movie, in the world of digitalized filmmaking which this movie embodies, everything on the screen is a special effect.

A.I. is a meditation on its own components; the technical means that make possible the mechanical child are as one with the means used to make the film. (It was when Kubrick saw the seamless interaction of actors and dinosaurs in Jurassic Park that he realized that A.I., with its world of half-demolished bodies and replaceable faces, could now be filmed as intended.) Now that we have the technology, what are we going to use it for? Perhaps to make—under the guise of children’s adventure stories—allegories exploring the philosophical dilemmas elicited by digital technology. The suggestion of allegory pervades A.I.; we might be reverting to that fin de siècle symbolist world of Maeterlinck’s plays, Ibsen’s Peer Gynt, Strauss’s Die Frau ohne Schatten, works in which the characters would be identified only as The Father, The Mother, The Human Child, The Mechanical Child. It was only a step from there to the early android fantasies of Karel Capek’s R.U.R. (1920) and Fritz Lang’s Metropolis (1926). What keeps A.I. from feeling like an exercise in aesthetic retrospection is that, in the interim, the robots have become real. They may not have feelings yet, but they have already been entrusted with a good part of the running of the world.

It’s another remake of Frankenstein or The Golem, but the man-monster here is the embodiment of the golden child who has haunted the American imagination in these latter decades: the inner child, the abandoned child, the illuminated child. Spielberg certainly grasps the implications of that fetish, since he has done more than his share to reinforce the myth of childhood as a privileged sphere of imaginative freedom, moral courage, uncorrupted emotion. The spectator prepares for another retelling of the myth of the little boy born to save the universe, unaware of his destiny until clued in by tutelary elders and fated to undergo the usual mythic journey through wilderness and man-made inferno. But the movie consistently goes against the grain of the emotional expectations that it invokes in Spielberg’s expertly realized shorthand; David is neither star-child nor hidden savior, but an industrial pro- totype persuaded by his programming that he exists. He can neither save the universe nor be saved by it.

It would be tempting to attribute the rigor of A.I.’s structure—its inexorable denial of easy solutions—to Kubrick; in any event the narrative’s firm architecture restrains any sentimentalizing tendency. The Pinocchio motif (the robot child’s journey in search of the Blue Fairy who will turn him into “a real boy”), which threatens at every moment to turn into a predictably wish-fulfilling extravaganza, is taken through ingenious variations all the way to the final demolition of the Blue Fairy two millennia hence in the ruins of Coney Island, in a Manhattan which has become Poe’s City in the Sea. What is unexpected is how concise and detached the film is, how Spielberg avoids milking the emotional implications, or calling on special effects as deus ex machina as in most contemporary digital fantasies. There is enormous relief in realizing that for once a tragic ending—the only possible ending—is to be permitted.

There are in fact three tragic endings. First there is David’s suicide after realizing that he is merely the prototype for an endless line of mass-produced replicas, and then his eternal solitude beneath the waters while the human race becomes extinct and the oceans freeze over. When he is retrieved 2,000 years later by what appear to be sophisticated artificial beings of a later provenance, there is again the fear that some magical happy resolution is to be proffered. This coda turns out to be a false reprieve. In the digital afterlife, David gets to remake the world according to his desires. The inhabitants of the future, who value him as a last link to the long-vanished human world, enable him to inhabit a neverland constructed out of his own stored memory, in which the emotionally deprived child finally has the mother all to himself.

The catch is that he isn’t really a child, but the artificial spectator of an artificial spectacle; and she isn’t really his mother, or not for long (she’s been cloned, from a few strands of hair, and the resurrection will only last for a single day). In the meantime—and the movie ends right there—they are alone together in the bottom of the universe: an ideogram of grief, disguised as a Hallmark card. More precisely, intelligence is alone with itself and what it has wrought, surrounded by interstellar chill. In the face of that confrontation, David undergoes the only small miracle permitted him: for the first time in his existence, he achieves a blissful unconsciousness. 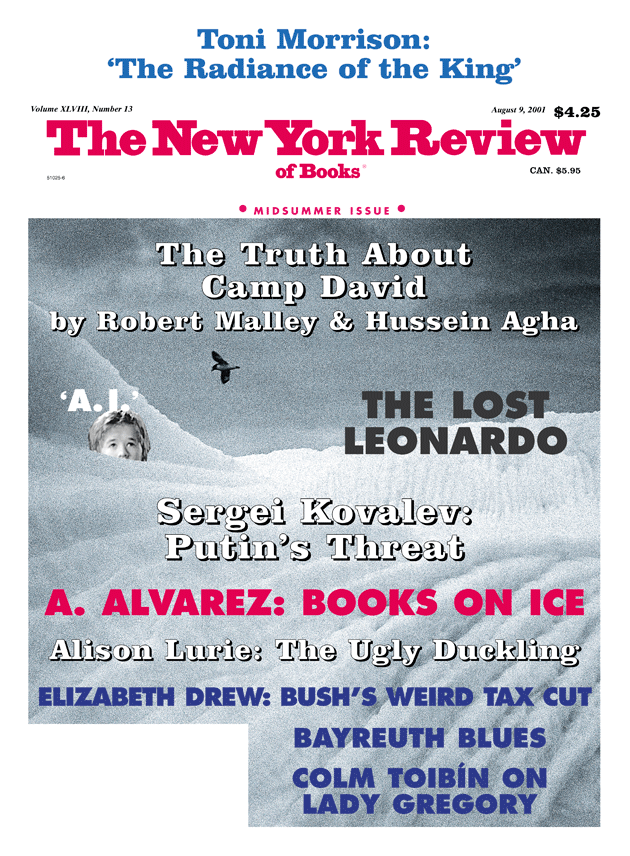 A historian of the Third Reich traces the processes by which history is not simply distorted but replaced by a fantastic parallel version.

A Timon for Our Time

A historian of the Third Reich traces the processes by which history is not simply distorted but replaced by a fantastic parallel version.

A Timon for Our Time

Geoffrey O’Brien's most recent books are Where Did Poetry Come From and the poetry collection Who Goes There.  (January 2021)