In response to Alexander Stille’s “Apocalypse Soon” [NYR, November 7, 2002], I must correct some factual errors and clarify some important points. The essay is presented as a review of Empire, a book I coauthored with Michael Hardt, but, in fact, it is instead a profile of my political activity in 1970s Italy. When dealing with such complex subjects a writer must know how to distinguish among reliable information, gossip, and slander. Stille mixes the three indiscriminately.

His argument can be summarized as follows: Negri was the brains behind Italian terrorism, leader of both Workers’ Autonomy, a nonterrorist political organization, and the Red Brigades, a terrorist organization. Since he is a terrorist his books should not be read or taken seriously. In Negri’s own country, in fact, he is hated for being a cattivo maestro, a bad teacher who corrupts the youth. Negri’s recent collaboration, Empire, should be ignored too because it is implicitly linked to terrorism.

As for the hatred for me in Italy, if Stille’s claim were true, one could not understand why in 1983, when I had been in prison for over four years without trial, the Italian people elected me as a member of parliament. One could not understand either why thousands of the most prominent Italians signed petitions in my favor, including Bernardo Bertolucci, Umberto Eco, Carlo Ginzburg, Alberto Moravia, and Leonardo Sciascia.

If I were in fact guilty of the crimes Stille assigns to me, one could not understand why Amnesty International supported my case and why the French government immediately welcomed and protected me, considering my Italian imprisonment unlawful.

Readers of The New York Review will recall that at the time of my arrest in 1979 the accusations against me were considered dubious and even scandalous by most reasonable observers. For example, an article published in The New York Review at the time—a critical article but one nonetheless based on the facts and knowledge of my work—declared, “Negri is a figure of some stature in Italy, and his arrest might be compared, imperfectly, to jailing Herbert Marcuse a decade ago on suspicion of being the brains behind the Weathermen” (Thomas Sheehan, “Italy: Behind the Ski Mask,” NYR, August 16, 1979).

Stille would not create such puzzles for readers if he understood better the irregular and unjust practices of the Italian courts, including extended preventive detention, convictions based solely on the evidence of convicts turned state’s evidence, and convictions based on “criminal association” in which there is no evidence that the accused has any knowledge of or material part in the crime. That might help readers understand how, when I will have finished my sentence in 2004, I will have served according to Italian law more than seventeen years of prison purely for crimes of opinion.

Stille also demonstrates little understanding of Italian history. The Italy of the 1970s was an Italy of cultural, political, and social contestation that had already lasted over a decade. I was one of the leaders of this contestation, just as Joschka Fischer was in Germany (now minister of foreign affairs) and Daniel Cohn-Bendit in France (now representative to the European Parliament). Of those participating in the contestation only a small fraction chose terrorism.

Like Fischer and Cohn-Bendit, I have always condemned terrorism. Stille, however, seriously distorts the truth about this. When he claims there was close proximity between Workers’ Autonomy (the group to which I belonged) and the Red Brigades—pretending that our group was only a slightly more refined and intellectual version of the terrorists—he deliberately ignores all the acquittals in court that demonstrated I had no part in the Red Brigades. He also omits the fact that I myself was condemned to death by the Red Brigades in prison because I opposed them.

Stille’s text is full of numerous other gross historical errors and omissions. For example, Stille cites two university professors who hold me responsible for violence in Padua, but omits the fact that on January 30, 1986, the Padua court acquitted me of any involvement in those events.

When Stille cites phrases from my old books they are all butchered and taken out of context. For example, he cites the ominous sentence “No pity for our enemies!” but fails to say that it was clearly in my text an ironic citation from a Sergio Leone spaghetti western film.

As for Stille’s insinuation that our book Empire is implicated in terrorism, if this were true one could not understand why the book has received such praise in the mainstream press. When The New York Times declares it “the next big idea” and when Time magazine celebrates my coauthor and me as “innovators to watch,” does this mean that the editors of Time and the The New York Times are secret sympathizers of terrorism?

We might get closer to understanding Stille’s real agenda by examining his claim that I was and remain pro-Soviet. This is far from the truth. Here again the author writing in The New York Review twenty-three years ago, who had actually read my work, gives a more accurate view: “The first and negative thesis of [Negri’s] own brand of Marxism is that communism has as little to do with socialism as it does with capitalism. If the Soviet Union represents Marxism, Negri writes, ‘we would be happy to do without Marx.'” Readers can also refer to the section of Empire titled “The Death Throes of Soviet Discipline,” in which Hardt and I condemn the Soviet system.

Stille’s agenda can perhaps be best explained by his own support and nostalgia for the now-defunct Italian Communist Party (PCI). I struggled against the PCI throughout the 1960s and 1970s. That may be in Stille’s eyes my greatest crime. (Indeed the Communists were my most energetic accusers in those years.) I think history has proven me right on that score.

I do not repudiate any of my own past. It is possible that I have made mistakes and I am certainly paying a high price, doing time despite the fact that my incarceration is unjust. I have assumed all my responsibilities and when I have completed my sentence I will be seventy years old. I do not see why I should also assume responsibility for things I did not do or think or say only because some petty, scandal-seeking journalist rewrites history as he sees fit.

Antonio Negri’s letter is a fascinating document, illustrating brilliantly one of the main points of my piece: Negri’s determination to airbrush out the more unpleasant aspects of his past career in order to recycle himself as an innocent victim of political persecution.

The strategy of the letter is simple: attribute to me a series of charges that I did not make and of which he is not guilty so that he can assume the mantle of outraged innocence, while failing to answer any of the specific actual charges I did lay at his doorstep. An attentive reader will note that Negri does not quote once from my piece, because in fact he is not able to challenge a single fact in it. By contrast, there is almost nothing in Negri’s letter that cannot be shown through passage-by-passage analysis to be patently false or distorted. (Because of space limitations, I have omitted a few points.)

I never accused Negri of carrying out or organizing this kind of activity—I said quite specifically that the violent acts were carried out by his followers, who thought, however, they were carrying out his revolutionary program. While this may (or may not) give Negri legal responsibility for these acts, it does implicate him morally. The same students who were beating up professors and setting off bombs at his own University of Padua, with a heavy concentration in his department of political science, were chanting and scrawling graffiti with the favorite slogans of Negri and his associates: “mass illegality,” “permanent civil war,” “punish one in order to educate a hundred.” As I wrote in my original piece: “If Negri disagreed with what was going on around him in Padua, he did not object to it at the time.”

At Potere Operaio’s national congress of September 1971, the leadership group declared: “It is not true that violence is okay only when it’s of the masses…. Today the class struggle has reached the point that organizing politically and militarily against the bourgeois state is the order of the day.” (Potere Operaio, No. 44, November 1971) In 1973, when the Red Brigades had begun kidnapping business executives, Potere Operaio was among the few far-left groups to write approvingly of the escalation of terror: “It must be said immediately that the practices of the BR (Red Brigades) try to offer a response in terms of attack, as we ourselves do, to the struggles of the workers in the big factories.” (Potere Operaio, No. 61, July 16, 1973) Even as late as November 1978, after the kidnapping and killing of Aldo Moro, Negri’s own magazine, Rosso (Red), far from condemning the escalating violence of the Red Brigades, wrote: “In claiming as its own all militant actions on the proletarian side, the movement must relaunch the initiative on the terrain of organized counterpower and mass illegality.” (Rosso, November 31, 1978)

There seemed to me good reasons to discuss Negri’s earlier career and writings as well as his reincarnation in Empire, in which invocations to “permanent civil war” have turned into “the lightness of being Communist.” Negri, as I suggested, has pulled off a shrewd and cynical marketing operation in recycling himself as an innocent victim of political persecution rather than a person with much to explain about his past. This does not invalidate Empire, as I stressed in my piece: “Yet to damn Negri because of his involvement with Autonomia would be to miss the new directions his work has taken in recent years.” But Negri’s new American acolytes should understand the roots of his ideas and experience. He was a pied piper of political violence and helped lead an important part of an entire generation of Italians down a path of self-destruction. Negri evidently prefers not to have these unsavory parts of his past brought to light and dismisses them as “scandal-seeking” journalism. (The lengths to which he goes in his letter—denying the undeniable and issuing outright falsehoods—shows that the issues involved are anything but petty.) But he should be held to account for his words and actions—not in the court of law, but in the forum of public opinion, where he still would like to command attention. 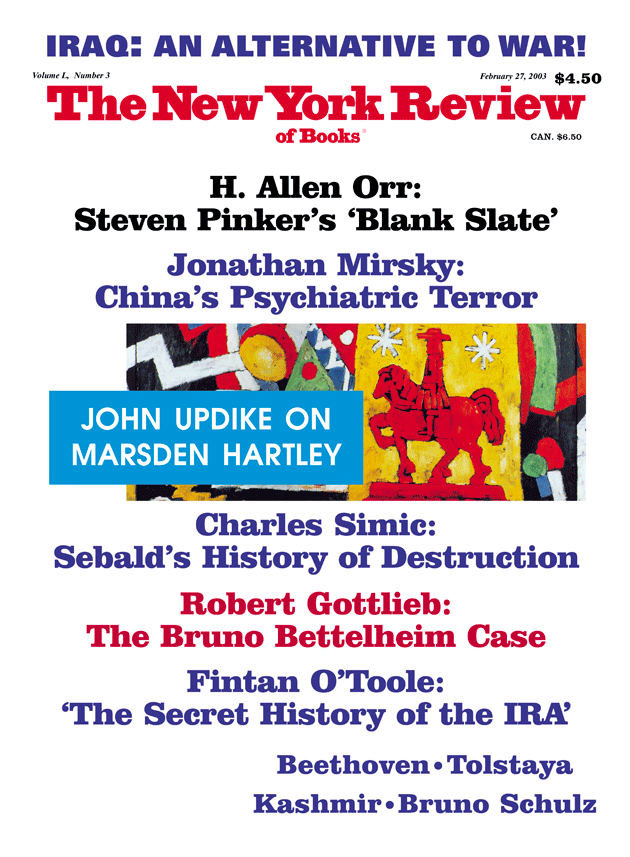 Italy: Behind the Ski Mask

Terror in Italy: An Exchange

The Riddle of Terrorism

From ‘All Day Permanent Red: the First Battle Scenes of Homer’s Iliad Rewritten’