Following are excerpts from a response by Isaiah Berlin to a letter from Beata Polanowska-Sygulska, then a researcher from the Jagiellonian University, Kraków, Poland, who, while working on a Ph.D. thesis on Berlin’s philosophy of freedom, had written to him inquiring about his views. Dr. Polanowska-Sygulska later published a book on the same topic, Filozofia wolnosci Isaiaha Berlina (Isaiah Berlin’s Philosophy of Freedom).1 Footnotes have been added by Henry Hardy, one of Isaiah Berlin’s literary trustees.

Thank you very much for your most interesting letter, which I read with great pleasure and attention, and have since mislaid. Although I think I remember its contents well, having read it twice, it may be that my answer will not precisely answer any of your questions—but I shall do my best—if I find it in the meantime, I shall try to modify this letter accordingly.

First, then, let me talk about the difficult question of “human nature.” Do I believe in a fixed and unalterable human nature?—you rightly quote me as saying that I do not, and then again rightly quote me as referring to it as the basis of human communication. What, then, do I believe? I wish I could answer this question with extreme precision, but it does not seem to me to lend itself to that. What, I think, I believe is that there are thinkers, principally believers in Natural Law, who propose that all men are created, whether by God or Nature, endowed with innate knowledge of certain truths—some “factual,” some normative—the lists differ from Aristotle, the Stoics, Isidor of Seville, Gratian, Grotius, etc., but for the most part they include the existence of God, the knowledge of good and evil, right and wrong, the obligation to tell the truth, return debts, keep promises (pacta sunt servanda), some or all of the biblical Ten Commandments, and so on.

I do not know who first questioned this—I dare say Epicurus or Lucretius—but in modern times the main attack upon this was delivered by thinkers like Vico and Herder and Marx (and, indeed, Hegel and his followers), and, of course, the empiricists, not Locke but Hume and his followers: according to whom, whatever the status of these Natural Laws, primitive men did not possess knowledge or even awareness of them, and they came into consciousness, or, indeed, formed objects of belief or certainty, in the course of evolution, or under the influence of changes in material circumstances and the growth of culture (whatever factors enter into that); for this entails that human beings go through a process of moral or metaphysical growth and development; and this is as valid as that empirical knowledge is an onward-going process, whether one believes that it tends to progressive development towards some kind of perfection (which it may never reach) or not—that it is cumulative but possesses no identifiable structure or teleological tendency.

This is certainly what Vico and Marx believed—that is, they believed that what is called human nature varies and differs from culture to culture, or even within cultures—that various factors play a part in the modification of human responses to nature and each other; and that therefore the idea that all men at all times in all places are endowed with actual or potential knowledge of universal, timeless, unalterable truths (whether such truths exist or not, though for the most part such people did not believe them to exist) is simply false. The belief in such a priori knowledge and such unalterable truths does form the heart of the central European tradition, from Plato and the Stoics through the Middle Ages and perhaps in the Enlightenment as well—to our own day, indeed—but if Vico and Marx etc. are right, and I think they are, this is not a valid conception: human beings differ, their values differ, their understanding of the world differs; and some kind of historical or anthropological explanation of why such differences arise is in principle possible, though that explanation itself may to some degree reflect the particular concepts and categories of the particular culture to which these students of this subject belong.

I do not think this leads to relativism of any kind; indeed, I have an essay on the alleged relativism of the eighteenth century, of which I enclose an offprint.2 But even though there is no basic human nature in this sense3—in the sense in which, for example, Rousseau believed that if you strip off all the increments, all the modifications, corruption, distortion, etc. (as he thought of it) brought about by society and civilization, there will be discovered a basic natural man—sometimes identified with, say, Red Indians, who have not had the unfortunate experience of having their natures distorted by European culture. This is the position attacked, for example, by Edmund Burke, who says that the idea that there is a natural man (about whom he thinks the French revolutionaries speak, and whose rights they wish to restore) is false, that there is no such creature; that the arts, which according to Rousseau are a later and perhaps disastrous development, are, as he says, “parts of man’s nature”; that there is no central, pure, natural being who emerges after you have scraped off all the artificial beliefs, habits, values, forms of life and behaviour which have been, as it were, superimposed on this pure, natural being. That is what I mean by denying a fixed human nature: I do not believe that all men are in the relevant respects the same “beneath the skin,” i.e., I believe that variety is part of human existence and in fact—though this is quite irrelevant—that this is a valuable attribute, though that is a very late idea, probably not to be met much before the eighteenth century.

What, then, do I mean by saying that men do have a common nature? Well, I think that common ground between human beings must exist if there is to be any meaning in the concept of human being at all. I think that it is true to say that there are certain basic needs, for example—for food, shelter, security, and, if we accept Herder, for belonging to a group of one’s own—which anyone qualifying for the description of human being must be held to possess. These are only the most basic properties; one might be able to add the need for a certain minimum of liberty, for the opportunity to pursue happiness or the realization of one’s potentialities for self-expression, for creation (however elementary), for love, for worship (as religious thinkers have maintained), for communication, and for some means of conceiving and describing themselves, perhaps in highly symbolic and mythological forms, their own relationship to the environment—natural and human—in which they live. Unless there is that, communication between human beings, even within a society, let alone understanding of what others have wished to communicate in other ages and cultures, would become impossible. I believe in the permanent possibility of change, modification, variety, without being able to state that there is some central kernel which is what is being modified or changed—but there must be enough in common between all the various individuals and groups who are going through various modifications for communication to be possible; and this can be expressed by listing, almost mechanically, various basic needs—“basic” for that reason—the various forms and varieties of which belong to different persons, cultures, societies, etc.

The need for food is universal, but the way I satisfy it, the particular foods I crave, the steps I take to obtain them, will vary; so with all the other basic needs—my mythology, metaphysics, religion, language, gestures will widely vary, but not the fact that these are attempted ways of trying to explain to myself, to find myself at home in, a puzzling and possibly unfriendly environment, or, indeed, world. Wittgenstein once explained the concept of “family face”4—that is, among the portraits of ancestors, face A resembles face B, face B resembles face C, face C resembles face D, etc., but there is not a central face, the “family face,” of which these are identifiable modifications; nevertheless, when I say “family face” I do not mean nothing, I mean precisely that A resembles B, B resembles C, and so on, in various respects, and that they form a continuum, a series, which can be attributed to family X, not to family Y. So with the various natures of various cultures, societies, groups, etc. This is what I mean—that there is not a fixed, and yet there is a common, human nature: without the latter there would be no possibility of talking about human beings, or, indeed, of intercommunication, on which all thought depends—and not only thought, but feeling, imagination, action. I do not know if I make myself clear, but that, I think, is what I believe. This may, indeed, be confused or open to criticism, and if you wish to produce such criticisms, as you have already, please feel free to do so—I should be only grateful, I do not regard anything that I think as so true as not to be totally falsifiable sooner or later—although I hope not….

Let me now say how grateful I am to you for taking my work seriously and for writing to me the letter that you have. I should love to talk to you about these things, which I am sure would be very useful to me and may be of some use to you. I enclose, therefore, a kind of annex to this letter, which explains the machinery whereby you might be able to come to Oxford for a month or longer, in which case I could talk to you “freely” (in the negative sense) from time to time, and you could also meet other philosophers who might be of even greater interest and profit to you. 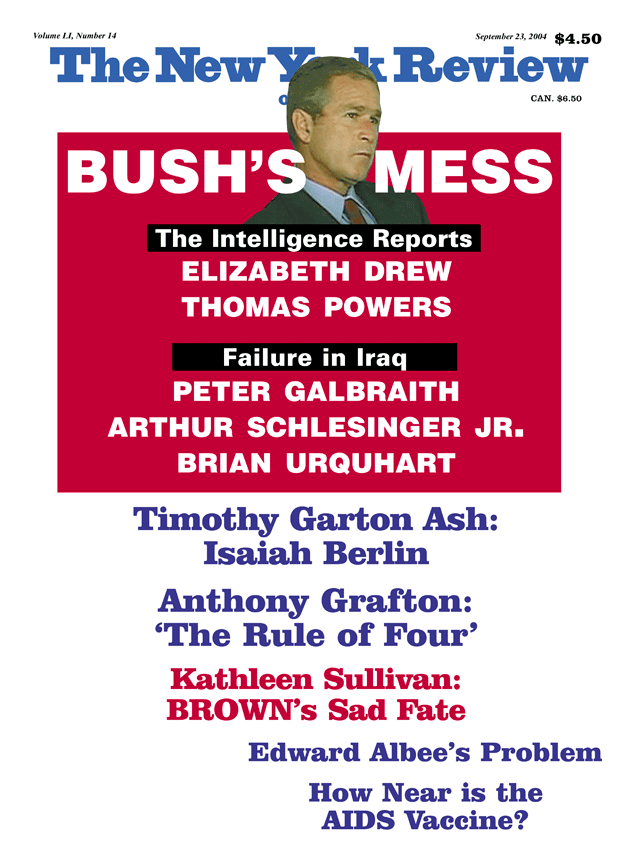 The Unique Qualities of Joe Alsop

A Message to the 21st Century

The misguided search for a single, overarching ideal

The Unique Qualities of Joe Alsop

A Message to the 21st Century

The misguided search for a single, overarching ideal

Isaiah Berlin (1909–1997) was a philosopher and historian of ideas who held the Chichele Professorship of Social and Political Theory at Oxford. The final volume of his correspondence, Affirming: Letters 1975–1997, was published in December 2015.