Against the opposition of their four colleagues, five right-wing Supreme Court justices have now guaranteed that big corporations can spend unlimited funds on political advertising in any political election. In an opinion written by Justice Anthony Kennedy and joined by Chief Justice John Roberts and Justices Samuel Alito, Antonin Scalia, and Clarence Thomas, the Court overruled established precedents and declared dozens of national and state statutes unconstitutional, including the McCain-Feingold Act, which forbade corporate or union television advertising that endorses or opposes a particular candidate.

This appalling decision, in Citizens United v. Federal Election Commission, was quickly denounced by President Obama as “devastating”; he said that it “strikes at our democracy itself.” In his State of the Union speech of January 27, he said, “Last week, the Supreme Court reversed a century of law that I believe will open the floodgates for special interests—including foreign corporations—to spend without limit in our elections.” He is right: the decision will further weaken the quality and fairness of our politics.

The Court has given lobbyists, already much too powerful, a nuclear weapon. Some lawyers have predicted that corporations will not take full advantage of it: they will want to keep their money for their business. But that would still permit carefully targeted threats. What legislator tempted to vote for health care reform or Obama’s banking reorganization would be indifferent to the prospect that his reelection campaign could be swamped in a tsunami of expensive negative advertising? How many corporations fearful of environmental or product liability litigation would pass up the chance to tip the balance in a state judicial election?

On the most generous understanding the decision displays the five justices’ instinctive favoritism of corporate interests. But some commentators, including The New York Times, have suggested a darker interpretation. The five justices may have assumed that allowing corporations to spend freely against candidates would favor Republicans; perhaps they overruled long-established laws and precedents out of partisan zeal. If so, their decision would stand beside the Court’s 2000 decision in Bush v. Gore as an unprincipled political act with terrible consequences for the nation.

We should notice not just the bad consequences of the decision, however, but the poor quality of the arguments Justice Kennedy offered to defend it. The conservative justices savaged canons of judicial restraint they themselves have long praised. Chief Justice Roberts takes every opportunity to repeat what he said, under oath, in his Senate nomination hearings: that the Supreme Court should avoid declaring any statute unconstitutional unless it cannot decide the case before it in any other way. Now consider how shamelessly he and the other justices who voted with the majority ignored that constraint in their haste to declare the McCain-Feingold Act unconstitutional in time for the coming midterm elections.

Citizens United, a small nonprofit corporation almost entirely financed by individual contributions, had made a very negative film about Hillary Clinton. It asked the Court only to rule that its method of distributing that film, on a video-on-demand service, was not outlawed by the Act. It offered several arguments, some of them plausible, for interpreting the Act that way. So the Court did not have to decide whether to overrule the Act: it could have agreed with Citizens United while reserving that larger question. But after they first heard arguments in the case, the five justices declared that they wanted, on their own initiative, to consider declaring the Act unconstitutional. They introduced that unnecessary issue themselves and then scheduled an emergency special hearing during the summer so that they could strike down the statute as quickly as possible.

Justice Kennedy, in his opinion for the 5–4 majority, tried to explain why that was necessary. It would have been possible, he conceded, to interpret the McCain-Feingold Act’s prohibition of corporate “broadcast, cable, or satellite” electioneering that is “publicly distributed” as not applying to video-on-demand TV. But he declined this strategy because transmission technology could be expected to change, so that the Court would be required to revisit the issue time and time again. He did not explain why the Court could not have drafted a general principle interpreting the statute to guide future decisions as technology develops, as it has in so many other cases. For example, the Court’s doctrine of “reasonable expectation of privacy” is designed to adapt to evolving technology of surveillance and spying.

The conservative justices also had to overrule two of the Court’s prior decisions—its 1990 Austin and 2003 McConnell decisions. In his Senate hearings, Roberts declared his great respect for judicial precedent: he said that just because he thought that an earlier Court decision had been wrongly decided or poorly argued would be no reason to overrule it. It would have to have proved unworkable or its basis in principle would have to have been eroded by other intervening decisions. Kennedy offered no evidence that restrictions on corporate electioneering had proved unworkable, which is not surprising because such restrictions had been in place since 1907.

Instead he argued that the two decisions were themselves inconsistent with other precedents. But as Justice John Paul Stevens pointed out in his long and impressive dissenting opinion, Kennedy was able to cite only one past decision actually to that point: the Court’s 1978 Bellotti decision, in which it in fact denied what Kennedy takes it to have held. “Our consideration of a corporation’s right to speak on issues of general public interest,” the Court stated in that case, “implies no comparable right in the quite different context of participation in a political campaign for election to public office.” Kennedy disregarded that clear statement because, he said, it occurred in “a single footnote.” But that is a natural place for a clarification; and Kennedy’s suggested distinction between text and note is entirely novel. Some of the Court’s footnotes have proved much more important than the decisions to which they were attached.

The main theoretical flaw in Kennedy’s opinion is different, however. The opinion announces and perpetuates a shallow, simplistic understanding of the First Amendment, one that actually undermines one of the most basic purposes of free speech, which is to protect democracy. The nerve of his argument—that corporations must be treated like real people under the First Amendment—is in my view preposterous. Corporations are legal fictions. They have no opinions of their own to contribute and no rights to participate with equal voice or vote in politics.

Kennedy’s opinion left Americans very little room to protect themselves against this further degradation of their democracy. But it did leave some. He acknowledged that the ruling does not prevent Congress from requiring reasonable disclosures and disclaimers in corporate advertising. I believe Congress should require a prominent statement in every such ad disclosing any corporate sponsors and declaring that their support represents the opinion of the corporation’s officers, who have a duty to promote the corporation’s own interests, and not necessarily the opinion of any of their shareholders who are actually paying for the ad.

I hope to discuss this and other suggestions for legislation—as well as the poor quality of the arguments offered by Justice Kennedy, and the potential consequences of the decision—in more detail in a future issue of The New York Review.

(A version of this article was published on the NYR blog, blogs.nybooks.com.) 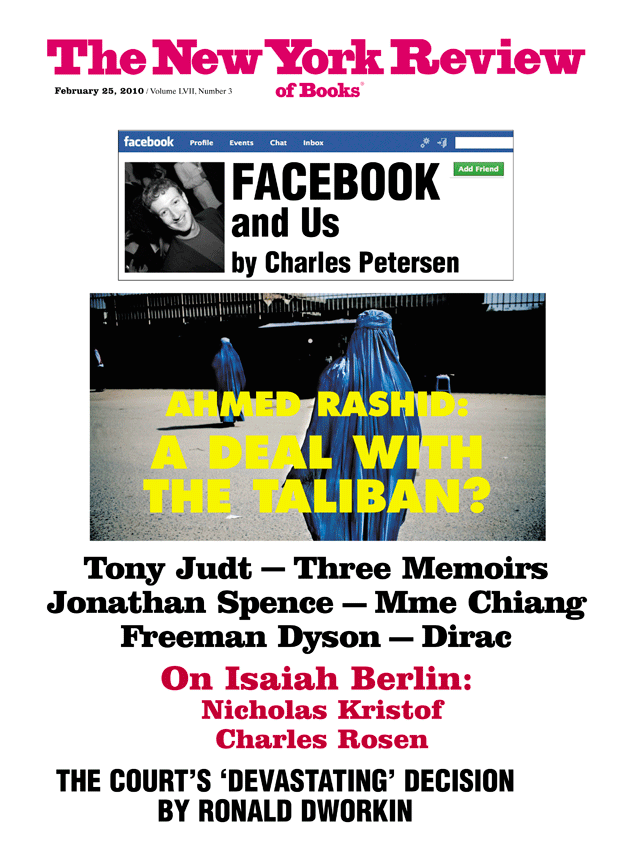 A Deal with the Taliban?

The Triumph of Madame Chiang

‘The “Devastating” Decision’: An Exchange

Ronald Dworkin (1931–2013) was Professor of Philosophy and Frank Henry Sommer Professor of Law at NYU. His books include Is Democracy Possible Here?, Justice in Robes, Freedom’s Law, and Justice for Hedgehogs. He was the 2007 winner of the Ludvig Holberg International Memorial Prize for “his pioneering scholarly work” of “worldwide impact” and he was recently awarded the Balzan Prize for his “fundamental contributions to Jurisprudence.”

A Deal with the Taliban?

The Triumph of Madame Chiang