Sometime in 1976 I was asked to be a judge for the 1975 National Book Awards for the category “The Sciences.” I was not particularly enthusiastic about accepting what seemed like a potentially tedious task but Carl Sagan was another judge and I thought it might be interesting to meet him. The third judge was the ecologist Garrett Hardin. We were summoned to meet in a New York midtown building and when I got there I was taken to a room where the books that had been submitted by their publishers were on display. There were dozens and dozens all piled up in heaps on tables. I thought that if their authors could see this, they would head for the nearest bar. I had a bit of an advantage over my fellow judges because at the time I was essentially doing all the reviewing of science books for The New Yorker. I had a shelf in the book room at the magazine and a couple of times a week I would take several home.

So, many of the books that were piled up were familiar to me. A few I had never heard of, such as Silvano Arieti’s Interpretation of Schizophrenia, which Sagan strongly recommended. Arieti was a proponent of the trauma theory of schizophrenia, which claimed that some traumatic experience is what triggers the disease. We had to select ten books as nominees and then spend a couple of weeks reading them in order to make an ordered list. Then we were to have a second meeting and decide who the winner would be.

On the day of this meeting I showed up as scheduled, as did Hardin, but there was no Sagan. This left us in a quandary. I wanted to give the award to Lewis Thomas’s Lives of a Cell—a book that poetically described different aspects of biology—while Hardin had some other choice. While we were wondering what to do next, we were visited by the poet John Hollander, who represented the committee on arts and letters. They wanted to give their award to Lewis Thomas and wanted us to give him up. I objected and only agreed once Hollander guaranteed that they would give the award to Thomas, which they did.

Then Sagan showed up. He had been getting his hair done at Sassoon’s and was longer under the dryer than he had anticipated. His first choice was Arieti, which was my second. It was Hardin’s last but we outvoted him. This seemed to take care of the matter but Sagan was not happy and insisted on discussing his unhappiness with the award officials. Sagan said that the award for poetry was given for poetry, the award for biography was given for biography, and so on but what was the award for science given for? Although he voted for Arieti’s book on schizophrenia, it was, he said, certainly not science. He made such an impression that the National Book Awards abandoned the science category after that year.

I was reminded of this when I read The Oxford Book of Modern Science Writing edited by the geneticist Richard Dawkins. It is certainly not an anthology of science papers. What would such an anthology look like? It might have Einstein’s 1905 paper on relativity, or the Crick and Watson paper on the double helix, or Edwin Hubble’s paper on expanding galaxies. Who would, or could, read such a selection and who would publish it? Dawkins’s book is rather bits and pieces of science writing from 1917 to 2007 of various degrees of difficulty. They represent the personal choice of Dawkins, who supplies each essay with a little introduction explaining why he chose to include it. He does not explain why he cuts off these excerpts where he does, often leaving the reader hanging. In his selection from James Watson, for example, nearly all paragraphs end in […]. Many of the pieces in the collection I had read in the original books from which they came, so in those cases I know what was left out. Some I was not familiar with; and for some I wondered why Dawkins had chosen that particular excerpt. Let me give an example of the latter.

As I mentioned, I wrote the science book reviews for The New Yorker. Occasionally William Shawn, the editor, would call my attention to a book that I had not seen. Sometime in the mid-1980s he showed me one written by someone I had never heard of. It was Primo Levi’s The Periodic Table. At this time Levi was not well known in the United States and I thought that this must be some popular book on the periodic table, of which there were many. But I also felt that Shawn must have had a reason so I took it home to read.

One may recall that the book consists of twenty-one fairly brief chapters, each one with some element as its title. The chapters are mainly autobiographical with a tie to whatever element is in the title. It soon became clear to me that I was in the hands of a very remarkable writer, and when I came to the chapter entitled “Cerium” I knew he was a great writer. The mixing of the elements with Levi’s life is part of the genius of the book, yet up to this point there is no hint of his time in Auschwitz. (At the time, I was not acquainted with his earlier book If This Is a Man (1947), published in the United States as Survival in Auschwitz.)

Suddenly in this chapter we are in the concentration camp, which he describes almost with detachment. He was starving. He had been given work as a chemist in a German project to make artificial rubber. But now he tells us how, having learned to steal anything that might be traded for food, he found a jar that was unlabeled and contained mysterious rods. A fellow inmate identified them as being made of iron- cerium, which when filed down could be used in cigarette lighters. This they did at night and were able to trade enough of the filed rods for bread so that they survived until the camp was liberated.

Then there is the chapter on vanadium. Levi describes his accidental contact after the war with one of the German officials who was in the camp and who attempts to excuse himself. It is this autobiographical material that makes The Periodic Table a great book. So what does Dawkins choose to reprint? He chooses part of the last chapter, which is entitled “Carbon” and has no particular relation to Levi’s life at all. It is a somewhat poetic description of the element and in my view is not that interesting. The reader gets a completely misleading impression of why this is a great book.

Here is a second example. Sometime in the mid-1970s I wrote a book review for The New Yorker in which I bemoaned the dearth of popular books on mathematics and in particular my inability to find one on Gödel’s incompleteness theorems. Shortly thereafter I got a letter from an editor at a mid-western university press in which he claimed he had just such a manuscript and was sending it to me. At the time I was teaching a few evening classes and came home from one of them to find a very large and heavy cardboard box. In it were several hundred pages of manuscript in notebooks. I thought this would make my task easy. After a few pages, I would decide that it was the work of a crank, and be done with it.

I began reading and when I looked up it was one in the morning. What I had been sent in manuscript form was Douglas Hofstadter’s Gödel, Escher, Bach: An Eternal Golden Braid. I immediately wrote to this editor and said he must publish this book. Weeks went by, but there was no answer. This made me mad and I decided to do something about it. I was then being published by Basic Books and had a very friendly relationship with its head, Martin Kessler. I brought the manuscript to Martin and said that he must publish it. Martin was interested but wary. The manuscript was some eight hundred pages long and full of illustrations. It could bankrupt a publisher. Martin sent it to a few people for review and the responses were mixed. In an act of courage he published it anyway. It became a best seller and Hofstadter won the Pulitzer Prize.

The parts of the book that I liked the least were Hofstadters’s excursions into whimsy. I felt that he had overdosed on Lewis Carroll. Needless to say, one of these excursions is just what Dawkins reprints. It is a dialogue between Achilles and a tortoise. Dawkins sees this as a “deeply embedded” parable on Gödel’s theorem. It is too deeply embedded for me and I hope it does not discourage readers from trying Hofstadter’s remarkable book.

The Oxford Book of Modern Science Writing is 419 pages long so there is plenty of space for the bits and pieces that Dawkins has assembled. There are selections from work by my two fellow judges—Sagan on the notion of science, which is presented here in bits, and Hardin on what he called the development of the commons—neither of which I found very memorable.

On the other hand, there is an excerpt from my favorite piece of writing by C.P. Snow. It is an introduction to G.H. Hardy’s classic A Mathematician’s Apology. In it Snow talks about Hardy’s discovery of the Indian mathematical genius Ramanujan. I have read this many times and always with pleasure. It ends with Hardy’s visit to Ramanujan in a London hospital. To cheer him up Hardy tells him that he came in a taxicab with the number 1729 and that he is sure that this is a number of absolutely no interest. Ramanujan immediately corrects him. It is the smallest number than can be expressed in two different ways as the sum of two cubes.

It is a pity that Dawkins does not tell us how this evolved into a problem in number theory. For example 87,539,319, which is known as taxicab 3, is the smallest number that can be expressed as the sum of cubes in three different ways. I also liked the passage taken from Erwin Schrödinger’s classic What Is Life?, one of my favorite books, in which Schrödinger describes the physics of heredity. And there are bits I had not read such as an account by E.O. Wilson of the Amazon and W.D. Hamilton’s mathematical explanation of the tendency of animals to cluster when attacked by predators.

But what to make of this collection? In French cooking there is the notion of the amuse-gueule. These are tasty bits one has before the main meal in order to prepare the palate for the real thing. That is what this book is—a collection of amuse-gueules. One hopes that the reader will go on to sample the real thing. 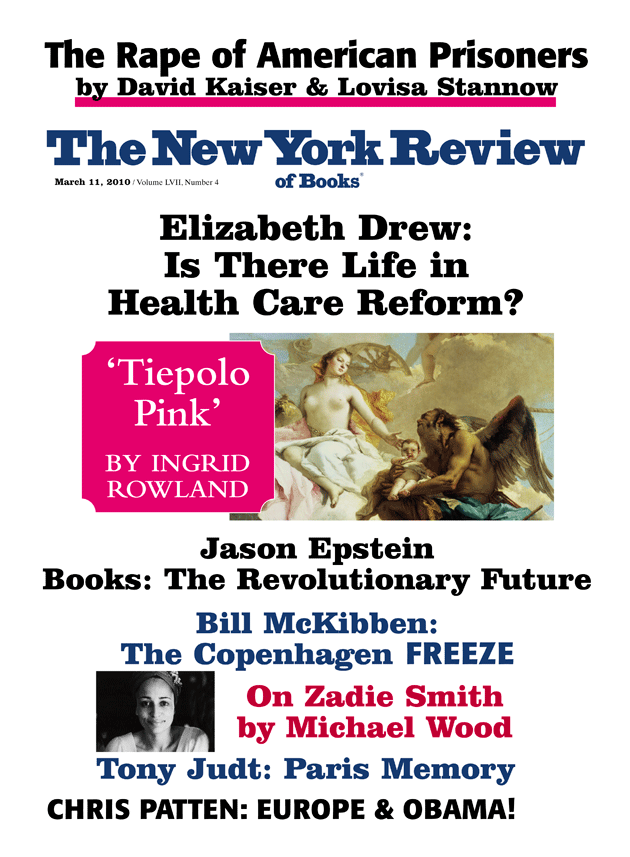 How Iran Gets the Bomb

How Iran Gets the Bomb

Jeremy Bernstein is a theoretical physicist and the author, most recently, of A Bouquet of Numbers and Other Scientific Offerings, a collection of essays.  (December 2016).

A towering figure in American medicine

The Twins and Modular Arithmetic