The Troubled Life of Nim Chimpsky from the October 13, 2011 issue

Peter Singer is a well-known advocate for animal rights, but he is not a research scientist, nor an expert in primate behavior, as his observations in his review of James Marsh’s facile documentary Project Nim [NYR, October 13] might suggest.

As the person who initiated, managed, and wrote the book on the actual research, I would like Singer’s readers and Marsh’s viewers to have the benefit of a more detailed perspective so they can make more objective judgments about what’s true and false.

During the “ape language wars” of the 1960s and 1970s, several psychologists tried to determine if an ape could learn a simple grammatical language. In 1969, Allen and Beatrice Gardner announced that Washoe, a chimpanzee they had raised, and ostensibly taught American Sign Language, had combined signs to produce sequences like “water bird” upon seeing a swan for the first time.

Although intriguing, the Gardner’s research amounted largely to a few fascinating anecdotes, not a collection of rigorously vetted scientific data. Had it been, they would have captured the circumstances under which not only “water bird” occurred, but also many other instances of the linguistically critical adjective + noun word construction, a key to understanding the structure of human languages.

In the actual Project Nim, which I conducted more than thirty years ago, we analyzed more than 20,000 of Nim Chimpsky’s utterances of two or more signs and found that grammatical structures such as adjective + noun and adjective + verb constructions were more than twice as frequent as the reverse constructions, noun + adjective and verb + adjective. There is nothing like this analysis in the ape language literature. The data seemed to prove that chimpanzees could indeed use language like humans. My team and I were thrilled.

But contrary to what we thought, our evidence turned out to be what scientists call a “false positive”—test results that appear positive but aren’t. The evidence was in videotapes that I had reviewed many times, but had failed to notice until I began analyzing our results for publication.

Previously, I had been so fixated on watching Nim’s hands that I missed what his teachers had been doing on the side while in shadow. About one quarter of a second prior to Nim’s signing, they were making the same or similar signs!

This discovery downgraded what we thought were spontaneous utterances to imitative responses. I saw the same symbiotic relationship when I viewed videos and films of Washoe and Koko (the first gorilla who had allegedly learned to sign). Their teachers had also “led” their charges in their signing, unwittingly I’m sure. Instead of learning to converse with their trainers, Washoe and Koko, like Nim, only learned to use imperatives that were involuntary demands for primary rewards.

In November 1979, I published my results in Science magazine. To their credit, the editors understood what Marsh’s Project Nim and Singer’s review fail to grasp—profound negative results often occur in scientific research, but this doesn’t diminish its value. Marsh and Singer take the reverse view; they believe negative results equal unequivocal failure, with almost sinister implications for the ethics and motivations of the researchers. I absolutely disagree.

The hypothesis I published in Science thirty-plus years ago still holds true and can be validated by anyone who watches one hour of an unedited videotape of any chimpanzee signing with a human, with both parties visible in each frame. The video will reveal the extent to which the trainer prompted the chimp’s signing and/or gave small rewards to keep it motivated to sign. No one has yet to question my conclusion.

I would also like to address the most egregious criticism that Singer makes of my motives in ending my research and returning Nim to his Oklahoma birthplace:

Was it possible that Terrace had taken such a negative view of Nim’s abilities because dumping a language-using, humanized ape back in a cage with non-language-using chimpanzees would be worse than doing that to an animal without the ability to use language?

This question makes me wonder if Singer actually believes that Nim could use language and that I therefore returned him into a nonsigning group so that he could blend in with the rest of the “illiterate” population where his talent would never be discovered.

Does Singer seriously think I would misinterpret my findings to show that there was nothing special about Nim and forgo the recognition I would have gained had I announced its opposite?

I attribute this bizarre notion and other professionally unbecoming comments to Singer’s inability or unwillingness to understand what Project Nim truly accomplished. Worse was his failure to discern, while writing his review, that Marsh’s ulterior motive was to create a film that would sell better because it had both a hero, Nim, and a villain, me. Not being an expert in primatology, Singer also didn’t recognize that Marsh chose selectively from the data and photographs that I provided him to back his point of view.

Nim was a smart and engaging chimpanzee that touched everyone who worked with him. We all wished that he could have learned. But it didn’t happen because it couldn’t happen, despite his and his relatives’ genetic similarity to humans and the aberrational tendency of some animal rights advocates to anthropomorphize simians as humans. In a nutshell, simians lack what is called a “theory of mind”—the ability to perceive what another simian is thinking. Unlike human language, which is conversational, an ape’s only expectation when signing is a reward.

For everyone concerned with chimpanzee research and animal welfare, the story of Project Nim, and what was learned with his invaluable assistance, should have been examined by Singer and shown by Marsh with far greater professional concern for the science and truth of what happened. Instead, they have sullied his story by a superficially selective analysis in one case and superficially provocative filmmaking in the other.

Herbert Terrace ignores the extensive research carried out subsequent to his 1979 paper that contradicts his conclusion that ape signing is mere imitation or that, as he says in his letter, ape signing is only “involuntary demands for primary rewards.” Some of this research was done with Nim. Chris O’Sullivan and Carey Yeager found a much higher rate of spontaneous signing in conversational settings than in the kind of formal training that Terrace imposed on Nim. As O’Sullivan wrote last August, commenting on the NYRblog version of my piece on Project Nim, a key difference between Terrace’s research and that of other pioneering researchers like Allen and Beatrix Gardner and Roger Fouts is that Terrace failed to understand “that children (and presumably chimps raised as children) absorb language in an environment where language is used….”1

Roger and Deborah Fouts later showed that Washoe, the first chimpanzee to be taught to sign, herself taught signs to her adopted child, Loulis. Washoe and the chimpanzees with whom she lived also signed to each other when no humans were present. Terrace would no doubt object that this research does not meet the highest standards of scientific rigor, but he could scarcely say the same of Sue Savage-Rumbaugh’s work with Kanzi and other apes. I described this work in my essay, so it is curious that Terrace makes no comment on it. Savage-Rumbaugh and her coworkers used spoken English, which the apes clearly understood, and the apes replied by pressing icons on a keyboard.

To avoid any possibility of cueing, they were tested under conditions in which the human observers did not know the correct answers to questions that the apes were asked. As Savage-Rumbaugh, Stuart Shanker, and Talbot Taylor state, “Apes like Kanzi, Panbanisha, Mulika, and Panzee have learned to comprehend and produce simple language when raised in an environment where they are spoken to and treated as competent communicative partners….”2

More recently, Janni Pedersen and William Fields have analyzed a videotape of a conversation between Savage-Rumbaugh and Panbanisha. Their findings—published in a peer-reviewed journal and directly contrary to what Terrace claims in the letter above—are that Panbanisha is an active participant in the conversation. They conclude: “Panbanisha is a competent conversational partner, and this lends credibility to the claim that the bonobos at [Great Ape Trust of Iowa] have linguistic abilities with dimensions that best manifest themselves in ordinary conversation, as it is the case with human language.”3

Terrace is also in opposition to current thinking when he asserts flatly that “simians lack what is called a ‘theory of mind’—the ability to perceive what another simian is thinking.” In 2008, thirty years after David Premack and Guy Woodruff wrote a seminal paper entitled “Does the Chimpanzee Have a Theory of Mind?,” Josep Call and Michael Tomasello surveyed the extensive literature that now exists on this question. They conclude that “there is solid evidence from several different experimental paradigms that chimpanzees understand the goals and intentions of others, as well as the perception and knowledge of others.”4 Call and Tomasello do not find evidence that chimpanzees understand false beliefs, but it is clear that chimps have enough understanding of other minds to be able to perceive what others are thinking, and thus to use simple forms of language to communicate with them.

It is now clear beyond any reasonable doubt that Terrace’s 1979 Science article presented an unduly negative view of the abilities of apes to communicate spontaneously. That Terrace took so negative a view of his own research puzzled some of his own coworkers, who believed that they had often seen Nim sign spontaneously. They were also taken aback by Terrace’s abrupt termination of the project when Nim was still relatively young. One can only wonder why, if Terrace saw repeated cueing on the videotapes, he did not go back to Nim (as O’Sullivan and Yeager did some years later) to test whether Nim really would not sign without prompting.

These puzzles led to my question, which contains the suggestion that Terrace finds so egregious. That suggestion could be wrong, and I do not claim to know why Terrace acted as he did, but I still find plausible the idea that there could be some connection between his appalling treatment of Nim (to which Terrace’s letter offers no defense at all) and his rejection of the idea that apes can sign spontaneously—a rejection that serves to reinforce our belief in the uniqueness of our own species. 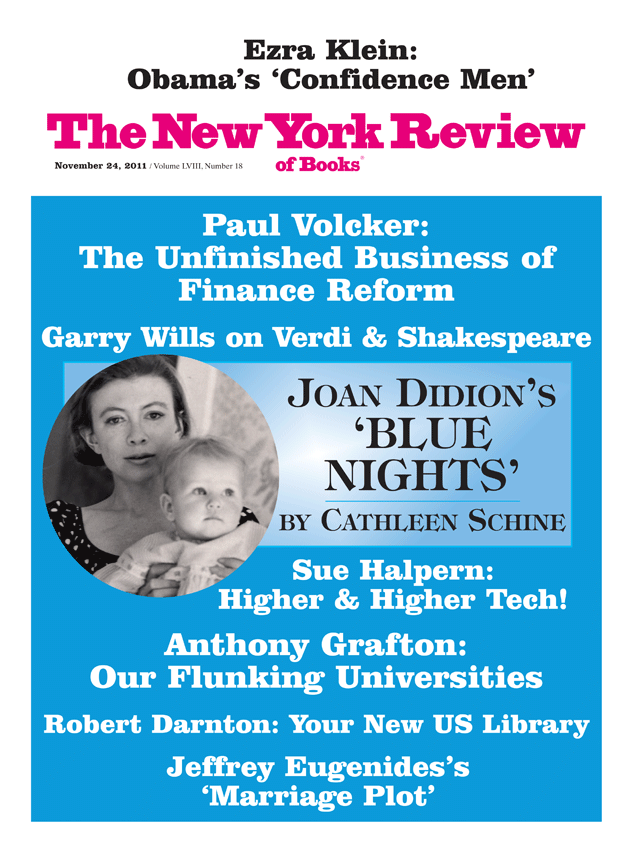 ‘Elegy to the Void’

Obama’s Flunking Economy: The Real Cause

‘Elegy to the Void’

Obama’s Flunking Economy: The Real Cause

The Revenge of I. B. Singer

The Language of Poetry