We were surprised to see that Bill McKibben’s essay “Why Not Frack?” [NYR, March 8] made no mention of ProPublica’s reporting on this essential issue. Mr. McKibben is a veteran environmental reporter but a relative newcomer to this subject. His piece suggested that serious reporting on this issue began in the past year. In fact, our nonprofit newsroom has published more than 150 stories on fracking over nearly four years.

ProPublica’s first article on fracking, in July 2008, prompted New York officials to postpone plans to allow unfettered drilling around New York City’s reservoirs. It questioned the industry’s broad statements about the safety of the practice, detailing the impact of natural gas drilling on the environment at hundreds of locations across the country. A subsequent story from November 2008, titled “Buried Secrets: Is Natural Gas Drilling Endangering US Water Supplies?,” was part of a package of work that made the reporter, Abrahm Lustgarten, a finalist for the 2009 Goldsmith Prize. Lustgarten expanded his reporting in 2009, and subsequently won the George Polk Award for Environmental Reporting and the Sigma Delta Chi Award for Investigative Reporting.

McKibben examined some of the major issues raised by fracking. We thought it might be useful for The New York Review’s readers to see our earlier stories on each of these, including water contamination, methane migration, wastewater disposal, fracking chemical disclosure, overmatched regulators, and radioactive water.

The detailed graphic that accompanied the review speaks to ProPublica’s sustained commitment to covering this issue. It first appeared on our website in November 2008 and has been widely reprinted.

I’m grateful that ProPublica has provided me a chance to laud their coverage of fracking, which I should have mentioned in the original essay; it is available online at www.propublica.org/series/fracking. In this as in many other realms they’ve done fine work. 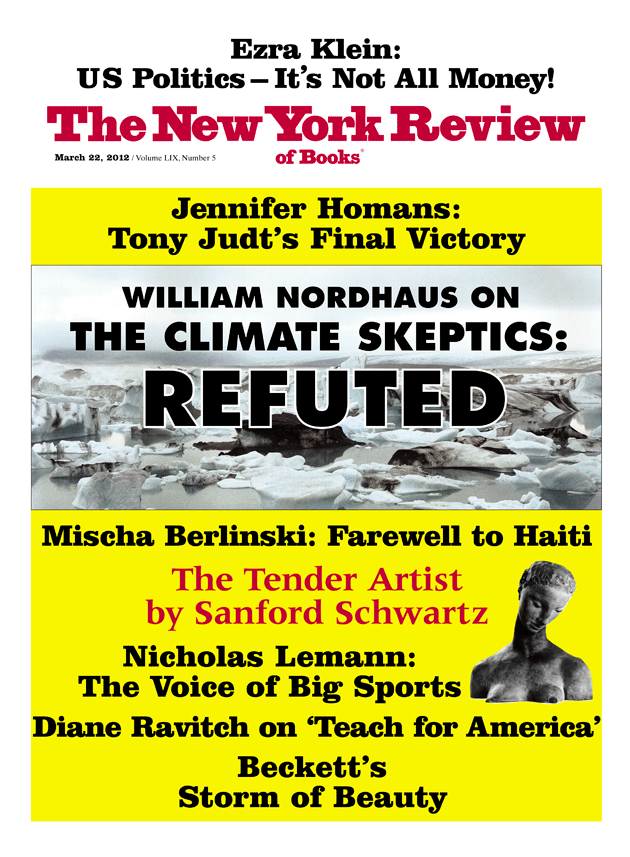 Why the Global Warming Skeptics Are Wrong

How, and How Not, to Improve the Schools

Why the Global Warming Skeptics Are Wrong

How, and How Not, to Improve the Schools

Look Up and See!

The Tragical History of New York