Though he ranks alongside Charlie Parker and John Coltrane as one of the greatest jazz saxophonists in history, no one knows why exactly Sonny Rollins hasn’t recorded a first-rate studio album since the 1960s. Some say that his style was irreparably damaged by years spent experimenting with funk, disco, and fusion in the Seventies and Eighties. Yet anyone who has seen Rollins perform on a good night knows that, even at eighty-two, he is still capable of playing with the same brilliance that first made giants like Parker, Miles Davis, and Thelonious Monk take an interest in him in the 1950s. And if there were any lingering doubts, the news that Rollins won three major jazz awards this summer should dispel the notion that his best years are behind him.

In spite of his advanced age, Rollins remains one of jazz’s most talented improvisers. He has almost inexhaustible stamina, complete control of his instrument, and a seemingly bottomless reservoir of musical knowledge (ranging from jazz standards and pop to folk songs and classical music), to say nothing of his decades of experience playing with almost every major figure in jazz. More important still, he has an impish and ironic sense of humor. He also has a keen appreciation of his audience; when performing he often walks into the crowd as he plays, hoping to draw inspiration from them.

In his newest album of live performances, Road Shows Vol. 2, there are moments when all this can be heard firsthand. A compilation of two recent live shows, including his eightieth birthday concert at the Beacon Theatre in New York, the record captures Rollins playing with the energy of someone half his age. Particularly noteworthy is the twenty-minute version of his classic twelve-bar blues, “Sonnymoon for Two,” on which he is joined by the multi- instrumentalist genius Ornette Coleman, whose free jazz heavily influenced Rollins in the 1960s. This is the first time the two have been recorded together, and though they do not connect in the way that one might have hoped, to hear Coleman playing side by side with Rollins is nevertheless a historic occasion. Perhaps more remarkable simply for the quality of playing is his performance of “Rain Check,” an old Billy Strayhorn song. As he and the forty-two-year-old trumpeter Roy Hargrove begin to trade fours—that is, exchange four-bar improvisations—Rollins’s relentless exuberance overtakes the young trumpeter, whose playing improves audibly the more he interacts with Sonny.

These kinds of moments should awaken listeners to a musician who is still, in Stanley Crouch’s words, capable of “summoning the entire history of jazz.” He was born in Harlem in 1930, the heyday of swing bands. Duke Ellington was a neighbor, and Louis Jordan, the father of R&B, inspired Rollins to pick up the alto saxophone as a child (he would later switch to tenor). He grew up within walking distance of the Apollo and Minton’s Playhouse, where Charlie Parker, Dizzy Gillespie, Thelonious Monk, and the guitarist Charlie Christian held the all-night jam sessions—Ralph Ellison called them “a continuing symposium of jazz”—that were so central to the development of bebop.

By the time he was twenty-one, he was playing with Miles Davis. Within the next five years, he achieved the kind of success that most jazz musicians might hope for in a lifetime: he was leading his own groups, making albums that were widely praised. Still in his twenties, he had already developed an unmistakable sound, a caustic, sometimes barking tone that The New Yorker’s jazz critic, Whitney Balliett, aptly described as “bossy” and “demanding” (and, somewhat less charitably, “persistently goatlike”). Here is Balliett on how Rollins melded his chief influences, the tenor saxophonist Coleman Hawkins and Charlie Parker:

He extracted the muscle from Hawkins’ tone and left the velvet, lopped off Hawkins’ famous vibrato, and sharpened Hawkins’ method of melodic playing by making it parodic. He learned Parker’s teeming disregard of bar lines, Parker’s way with rhythm (the oddly placed notes, the silences, the avalanches of thirty-second notes), and Parker’s trick of mixing surreal melodic passages with tumbling bursts of improvisation. And over all this he superimposed a unique and witty garrulity that made his immensely long solos seem, paradoxically, like endless strings of epigrams.

For many, this period was Rollins at his best. He released a number of landmark albums, like Saxophone Colossus, which contains, among others, his famous solo on “Blue 7,” praised by Gunther Schuller in 1958 as the leading example of a new movement toward “thematic and structural unity” in jazz improvisation. On Way Out West, another album released in these years, Rollins plays with a stripped-down, pianoless trio, using hackneyed songs from the cowboy movies he grew up watching at the Apollo as vehicles for wonderfully complex improvisation.

In spite of this success, Rollins quietly withdrew from the jazz world in 1959, citing dissatisfaction with his playing. For two years he did nothing but practice in his apartment. When a neighbor had a new baby, he moved his practice sessions to the Williamsburg Bridge. When he returned to the scene in 1962, he released The Bridge, one of his most beloved albums, which includes a gorgeous rendition of Billie Holiday’s “God Bless the Child.” Yet though he had probably reached his technical peak, in the time he had been gone Rollins had nevertheless been overtaken by two towering figures of the avant-garde. The first was John Coltrane, who in 1960 released the revolutionary Giant Steps—which contains one of the most harmonically complex jazz songs ever written—and thereafter began an ascent that would stop only with his untimely death in 1967. Second, and more radical still, was Ornette Coleman, one of the leading figures of free jazz. Suddenly Rollins was regarded—unfairly—as a conservative, a remnant of the old bebop and post-bop tradition.

The irony of this conservative label is that Rollins embraced these new styles, recording innovative albums with both Coleman’s and Coltrane’s band members (Our Man in Jazz and East Broadway Run Down, respectively). But by the end of the Sixties he told Balliett in an interview that he was “disillusioned…with the music scene” and again went on a sabbatical, much of which he spent in India. When he returned to New York in 1972 he began what some have seen as a long, slow decline.

As rock’s influence grew and fusion became popular among jazz musicians, Rollins, just as he had with Coleman’s “new thing,” once again attempted to meld elements of the latest style into his music. Yet in this instance he seems to have gone too far. He led ensembles structured more like rock groups, heavy on electric bass. His albums, incorporating not just rock, but funk and disco, came to sound more commercial, often resembling Gato Barbieri more than Sonny Rollins. He also struggled with advances in recording technology, especially as the old method of recording complete (or near-complete) takes in the studio gave way to the painstaking, piecemeal process of overdubbing. “I’ve always felt a little bit restricted in a studio,” he said in a 2008 interview with the jazz critic Gary Giddins, “at least when the technology came out that you can overdub and…change your original statement. So then I think I got spooked and I began trying to do everything perfectly.”

Of course, these records did not, as some have speculated, somehow impair Rollins’s ability to play thoughtful music. Silver City, Giddins’s carefully selected compilation of some of the best songs Rollins recorded on the Milestone label during this period, proves that he was still capable of playing at the same high level he always had. But his great moments of inspiration are fewer, and seem to come in spite of their surroundings, cropping up unaccountably in the middle of an otherwise insipid funk tune or disco track and just as quickly disappearing.

But in the mid-Seventies and early Eighties—even as he continued to release largely uninspired studio albums—another Sonny Rollins emerged on stage. This was the musician who had learned the art of crowd pleasing from Louis Jordan; who emerged years later from Charlie Parker’s long shadow; and who had devoured and assimilated every avant-garde idiom while still remaining, ultimately, himself. He can be seen in Sonny Rollins, ’74: Rescued, a newly discovered video of a set Rollins played at Ronnie Scott’s in 1974. He can also be seen in footage of a concert from 1986—reproduced in Robert Mugge’s documentary Sonny Rollins: Saxophone Colossus—giving an electrifying performance of the song “G-Man,” a fifteen-minute modal marathon with, in Robert Christgau’s words, “riffs jumping and giving long past their breaking points, notes held so long it’s a wonder Rollins hasn’t passed out.”

A clip from the 1986 film Sonny Rollins: Saxophone Colossus by Robert Mugge

Later in the same performance he plays an extemporaneous medley in which he weaves together about a dozen disparate songs—including, but not limited to, the Anvil Chorus from Il Trovatore, the funeral march from Chopin’s second piano sonata, “A-Tisket, A-Tasket,” “Somewhere Over the Rainbow,” and the William Tell Overture. Then, after playing a lick that seems to be a final nod to Louis Jordan, he jumps off the six-foot-high stage, breaks his foot, and then, supine, begins a lovely rendition of “Autumn Nocturne.”

Just why Rollins has reemerged so brilliantly remains something of a mystery, though his interview with Giddins hints at an answer. “I tend to feel more at peace with myself when I’m in a live situation,” he told Giddins.

Especially out in an open-air situation it’s even more conducive for my being able to get to whatever I have in me that night…. I just keep my mind blank as much as possible and…just let the music come…. It’s natural with me…. That’s the way I’ve always improvised from the time I was a small boy, just playing stream of consciousness in the house all day long. Basically that’s what happens now when I’m on the stage, I’m just playing stream of consciousness.

The idea that Rollins should, after years of struggling with studio recording, rediscover his talents in live performance has a certain affinity with the simplifying drive of his earlier work, in which he stripped the traditional jazz combo unit of a piano, leaving only saxophone, drums, and bass. Nor does it seem out of keeping with the multiple sabbaticals he took when he felt that the world of professional recording and club performance had, in some sense, corrupted and constrained his music. Rollins seems always to have wanted to be on his own, playing what comes to him as it comes. The improvised public performance may well be the ideal venue for him. 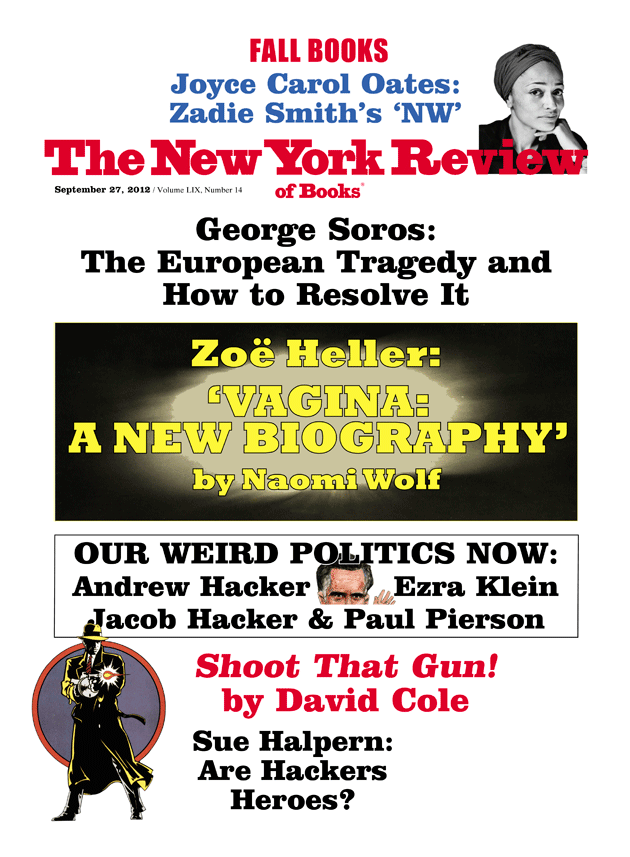 Far from the Realm of the Real

Lafcadio Hearn’s work was marked by a hatred of modern industrial life and a fascination with what he called “survivals”—traditions or folktales that he hoped would provide a living link to a more ancient form of narrative.

The Piano Ain’t Got No Wrong Notes

Far from the Realm of the Real

Lafcadio Hearn’s work was marked by a hatred of modern industrial life and a fascination with what he called “survivals”—traditions or folktales that he hoped would provide a living link to a more ancient form of narrative.

The Piano Ain’t Got No Wrong Notes

Christopher Carroll is a Senior Editor at Harper’s Magazine. (June 2021)