Susan Sontag (1933–2004) contributed over fifty reviews, articles, and letters to The New York Review between 1963 and 2002. The following is an extract from her review of Simone Weil’s Selected Essays, which appeared in the first issue in February 1963. It can be read in full at nybooks.test/50/Weil.

The culture-heroes of our liberal bourgeois civilization are anti-liberal and anti-bourgeois; they are writers who are repetitive, obsessive, and impolite, who impress by force—not simply by their tone of personal authority and by their intellectual ardor, but by the sense of acute personal and intellectual extremity. The bigots, the hysterics, the destroyers of the self—these are the writers who bear witness to the fearful polite time in which we live. It is mostly a matter of tone: it is hardly possible to give credence to ideas uttered in the impersonal tones of sanity. There are certain eras which are too complex, too deafened by contradictory historical and intellectual experiences, to hear the voice of sanity. Sanity becomes compromise, evasion, a lie. Ours is an age which consciously pursues health, and yet only believes in the reality of sickness. The truths we respect are those born of affliction. We measure truth in terms of the cost to the writer in suffering—rather than by the standard of an objective truth to which a writer’s words correspond. Each of our truths must have a martyr.

What revolted the mature Goethe in the young Kleist, who submitted his work to the elder statesman of German letters “on the knees of his heart”—the morbid, the hysterical, the sense of the unhealthy, the enormous indulgence in suffering out of which Kleist’s plays and tales were mined—is just what we value today. Today Kleist gives pleasure, Goethe is to some a duty. In the same way, such writers as Kierkegaard, Nietzsche, Dostoyevsky, Kafka, Baudelaire, Rimbaud, Genet—and Simone Weil—have their authority with us because of their air of unhealthiness. Their unhealthiness is their soundness, and is what carries conviction.

Perhaps there are certain ages which do not need truth as much as they need a deepening of the sense of reality, a widening of the imagination. I, for one, do not doubt that the sane view of the world is the true one. But is that what is always wanted, truth? The need for truth is not constant; no more than is the need for repose. An idea which is a distortion may have a greater intellectual thrust than the truth; it may better serve the needs of the spirit, which vary. The truth is balance, but the opposite of truth, which is unbalance, may not be a lie.

Thus I do not mean to decry a fashion, but to underscore the motive behind the contemporary taste for the extreme in art and thought. All that is necessary is that we not be hypocritical, that we recognize why we read and admire writers like Simone Weil. I cannot believe that more than a handful of the tens of thousands of readers she has won since the posthumous publication of her books and essays really share her ideas. Nor is it necessary—necessary to share Simone Weil’s anguished and unconsummated love affair with the Catholic Church, or accept her gnostic theology of divine absence, or espouse her ideals of body denial, or concur in her violently unfair hatred of Roman civilization and the Jews. Similarly, with Kierkegaard and Nietzsche; most of their modern admirers could not, and do not embrace their ideas. We read writers of such scathing originality for their personal authority, for the example of their seriousness, for their manifest willingness to sacrifice themselves for their truths, and—only piecemeal—for their “views.” As the corrupt Alcibiades followed Socrates, unable and unwilling to change his own life, but moved, enriched, and full of love; so the sensitive modern reader pays his respect to a level of spiritual reality which is not, could not, be his own.

Some lives are exemplary, others not; and of exemplary lives, there are those which invite us to imitate them, and those which we regard from a distance with a mixture of revulsion, pity, and reverence. It is, roughly, the difference between the hero and the saint (if one may use the latter term in an aesthetic, rather than a religious sense). Such a life, absurd in its exaggerations and degree of self-mutilation—like Kleist’s, like Kierkegaard’s—was Simone Weil’s. I am thinking of the fanatical asceticism of Simone Weil’s life, her contempt for pleasure and for happiness, her noble and ridiculous political gestures, her elaborate self-denials, her tireless courting of affliction; and I do not exclude her homeliness, her physical clumsiness, her migraines, her tuberculosis. No one who loves life would wish to imitate her dedication to martyrdom nor would wish it for his children nor for anyone else whom he loves. Yet so far as we love seriousness, as well as life, we are moved by it, nourished by it. In the respect we pay to such lives, we acknowledge the presence of mystery in the world—and mystery is just what the secure possession of the truth, an objective truth, denies. In this sense, all truth is superficial; and some (but not all) distortions of the truth, some (but not all) insanity, some (but not all) unhealthiness, some (but not all) denials of life are truth-giving, sanity-producing, health-creating, and life-enhancing.

This new volume of translations from Simone Weil’s work, Selected Essays 1934–43, displays her somewhat marginally. It contains one great essay, the opening essay here titled “Human Personality” which was written in 1943, the year of her death in England at the age of thirty-four. The longest argument of the book, spanning several essays, develops the parallel between Rome (and the ancient Hebrew theocracy!) and Nazi Germany. According to Simone Weil, who displays an unpleasant silence on the Nazi persecution of the Jews, Hitler is no worse than Napoleon, than Richelieu, than Caesar. Hitler’s racialism, she says, is nothing more than “a rather more romantic name for nationalism.” Her fascination with the psychological effects of wielding power and submitting to coercion, combined with her strict denial of any idea of historical progress, led her to equate all forms of state authority as manifestations of what she calls “the great beast.”

I cannot accept Simone Weil’s gnostic reading of Christianity as historically sound (its religious truth is another matter); nor can I fail to be offended by the vindictive parallels she draws between Nazism, Rome, and Israel. Impartiality, no more than a sense of humor, is not the virtue of a writer like Simone Weil. Like Gibbon (whose view of the Roman Empire she absolutely contradicts), Simone Weil as a historical writer is tendentious, exhaustive, and infuriatingly certain. As a historian she is simply not at her best; no one who disbelieves so fundamentally in the phenomena of historical change and innovation can be wholly satisfying as a historian. This is not to deny that there are subtle historical insights in these essays: as for example, when she points out that Hitlerism consists in the application by Germany to the European continent, and the white race generally, of colonial methods of conquest and domination. (Immediately after, of course, she says that these—both Hitler’s methods and the “normal colonial ones”—are derived from the Roman model.)

The principal value of the collection is simply that anything from Simone Weil’s pen is worth reading. It is perhaps not the book to start one’s acquaintance with this writer—Waiting for God, I think, is the best for that. The originality of her psychological insight, the passion and subtlety of her theological imagination, the fecundity of her exegetical talents are unevenly displayed here. Yet the person of Simone Weil is here as surely as in any of her other books—the person who is excruciatingly identical with her ideas, the person who is rightly regarded as one of the most uncompromising and troubling witnesses to the modern travail of the spirit. 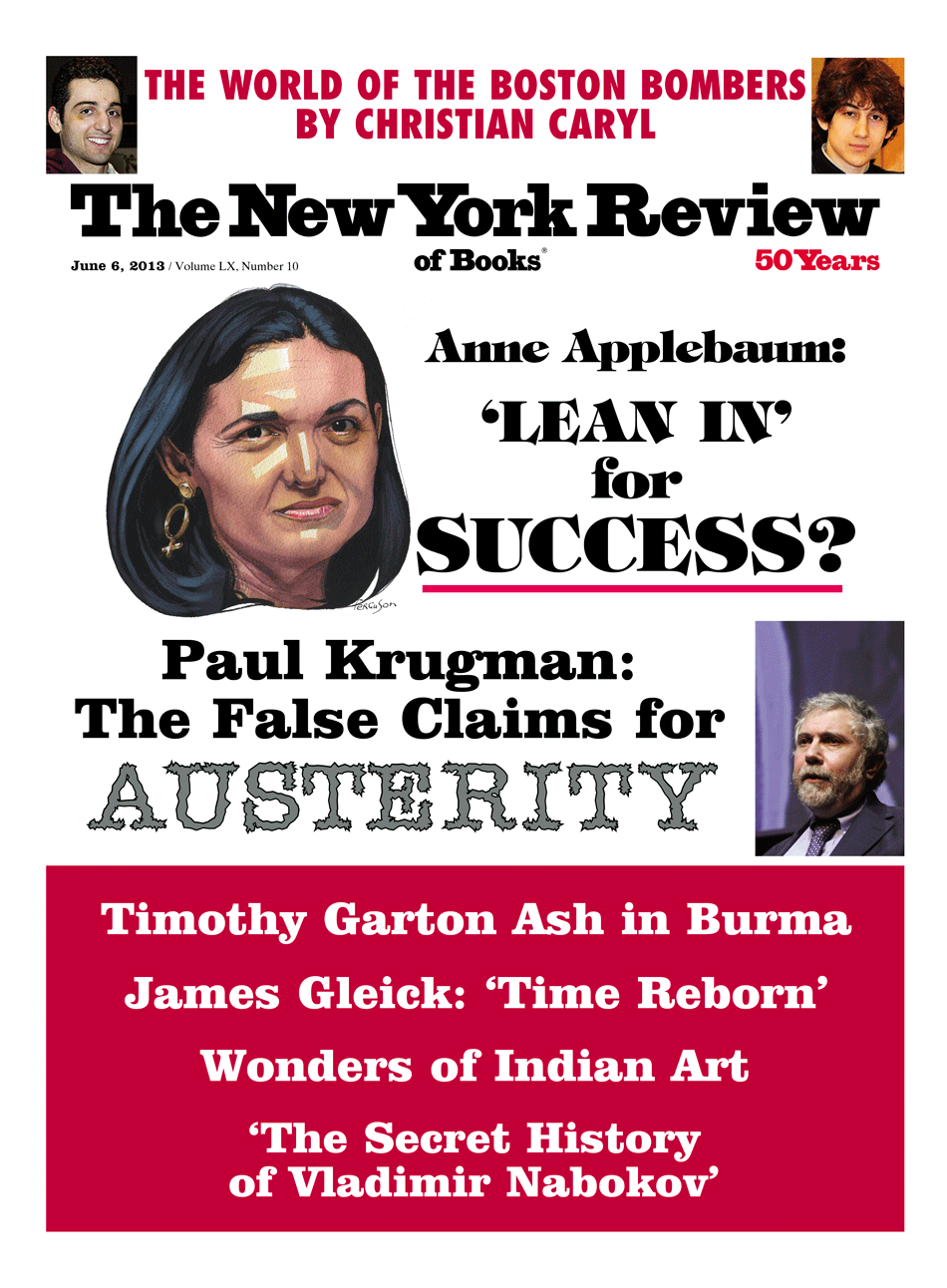 The False Claims for Austerity

How to Succeed in Business

It Was Anna’s Diary

It Was Anna’s Diary

Susan Sontag (1933–2004) was a novelist, playwright, filmmaker, and one of the most influential critics of her generation. Her books include Against Interpretation, On Photography, Illness as Metaphor, and The Volcano Lover.

The False Claims for Austerity

How to Succeed in Business

From ‘The Yawning Heights’

Although barely able to write, he managed to scribble this love note.