Something Faster Than Light? What Is It? from the November 10, 2016 issue

In a recent and very interesting review of a book by George Musser whose title begins Spooky Action at a Distance, Jim Holt attempts to explain why quantum mechanics is “nonlocal” [NYR, November 10]. By “nonlocal” in this context is meant that information can be exchanged at speeds greater than the speed of light. This would violate the theory of relativity, so there would be a conflict between the two theories, both of which we believe to be true, which would have to be reconciled. I believe and will try to explain that this whole discussion is based on a misguided but humanly understandable desire to explain quantum mechanics by something else—something more familiar. But if you believe in quantum mechanics there is nothing else. I will try to illustrate this with two examples, one quantum mechanical and one not. I begin with the non–quantum mechanical example.

Let us imagine there exists an electrically neutral particle that decays at rest into two gamma rays. From the conservation of momentum we know that these gamma rays will move off in opposite directions. We let them separate a great distance and an observer measures the momentum of one of them. If at that very instant another observer measures the momentum of the other he/she will find it has equal and opposite momentum. Does this mean that some instantaneous information has passed from one to the other? Of course not. These gamma rays have always had equal and opposite momenta. To attribute some “nonlocal” violation of relativity to this is evidently absurd. How does this differ from the quantum mechanical situation?

Now imagine we have two electrons, denoted “1” and “2.” Each of these electrons has a spin—an angular momentum that can point in one of two directions, “up” or “down.” We might imagine a state in which one had spin up and the other down—notated “up(1)down(2).” Hence whenever we measured the spin of 1, we would always find it up. But quantum mechanics admits a new and remarkable possibility—that these spins become “entangled,” so that you can no longer specify the spin of one of the electrons without knowing the spin of the other electron. Mathematically we can write the function that describes this situation as “up(1)down(2)–down(1)up(2).” This means that the two particles are guaranteed to have opposite spin directions when they’re measured, but until then we cannot say which particle is spin up and which spin down. (There is also a state with a plus sign between the two terms.)

In these states each particle is both spin up and spin down. That is quantum mechanics! If the particles become separated without disturbing the spin state—they remain entangled—then this condition persists no matter how far they are separated. Unlike the gamma ray case we remain ignorant of which particle has which spin. This is the real quantum mechanical novelty. Now one of the observers measures the spin of one of the electrons. This destroys the entanglement. Say this spin is “up.” If after the measurement the other observer measures the spin of the other electron it will turn out to be “down.” When later the two observers compare notes they will notice this correlation or anticorrelation. If the observers seek an “explanation” of this—an explanation that does not invoke quantum mechanics—they will probably be led to talking nonsense about “nonlocality” and “actions at a distance.” Quantum mechanics offers no such explanation, only predictions that agree with experiment. It was Niels Bohr who viewed quantum mechanics as a mathematical device for making predictions and not a picture of reality. It was this view of physics that Einstein could never accept. As Bohr once remarked, “If quantum mechanics hasn’t profoundly shocked you, you haven’t understood it yet.”

I welcome Jeremy Bernstein’s letter, because it offers the opportunity to correct some common misconceptions that bear on the debate over entanglement and nonlocality.

First, let’s be very precise about the meaning of relativity. Contrary to what Bernstein claims, relativity does not forbid the exchange of information at “superluminal” speeds—that is, faster than the speed of light. Nor does it forbid superluminal energy transfer, or superluminal signaling, or superluminal causation. All of these possibilities have been shown to be consistent with relativity, which—despite the widespread impression to the contrary—does not impose any universal speed limit. What relativity does say is that the speed of light will be the same for all observers, regardless of their (inertial) state of motion. A theory satisfies this core principle of relativity if it is “Lorentz invariant.”

Now let’s turn to the example of quantum entanglement that Bernstein describes. The two electrons are in an entangled spin state called a “singlet” state. Suppose these electrons have traveled very far apart. To make things vivid, let’s say that one of them is on Earth, in Alice’s lab; and the other is on Saturn, in Bob’s lab. (“Alice” and “Bob” are canonical characters in physics examples, because their names conveniently begin with A and B.) It takes light about forty-five minutes to get from Earth to Saturn. But if Alice performs a spin measurement on her electron here on Earth, that measurement will change the spin state of its entangled twin in Bob’s lab on Saturn not with a forty-five-minute delay, but instantly. (Translation for physics adepts: the two events are at a space-like separation.) That is what is meant by a “nonlocal” connection: one that outstrips the speed of light.

What is going on here? How are the electrons coordinating their behavior over vast distances, faster than the speed of light? Bernstein just throws up his hands and says, “That is quantum mechanics!” He believes—wrongly—that any explanation of this nonlocal connection would violate the principle of relativity. So he avers that the observed nonlocality must be unreal, and that any talk of it must be “nonsense.” (Bizarrely, he seems to think that the nonlocal correlations between the electrons do not even come into existence until Alice and Bob get together on the same planet to compare their experimental notes.)

But it would be a pity to halt the inquiry here, as Bernstein wishes to do. For there are some interesting things we can say about the nonlocal connection.

Second, we can say that it does not allow Alice to send Bob a superluminal signal. (Translation for physics adepts: no manipulation that Alice performs on her electron can affect the “density matrix” of Bob’s electron.)

Third, we can say it does nevertheless involve an exchange of information between Alice’s electron and Bob’s. The nature of this information may be mysterious—Sir Roger Penrose calls it “quantum information,” to distinguish it from the more familiar “classical” kind—but it is quite real in its effects. Indeed, determining just how many bytes of information are nonlocally exchanged between entangled particles is an active area of research among specialists in quantum computing and quantum cryptography.

Finally, on any reasonable account of causation as a relation of counterfactual dependence, we can affirm that there is indeed a causal connection between the two entangled electrons, one that operates faster than the speed of light—which is the meaning of nonlocality. (Note: the reason this causal connection cannot be used for signaling is that it is not controllable by Bob and Alice.)

Are we then forced to embrace the very conclusion that Bernstein dismisses as “nonsense”? Many physicists do embrace it—like Brian Greene, who has written that both theory and experiment “strongly support the conclusion that the universe admits interconnections that are not local.” However, some physicists and philosophers insist there are still loopholes. Perhaps, if we assume “superdeterminism,” or “backward causation,” or the “many-worlds theory,” we can restore good old locality to our picture of the world. There is a rich ongoing debate over these ideas among physicists and philosophers. Penrose and the Cambridge philosopher Huw Price have advocated something like a backward-causation hypothesis, according to which quantum effects can flow backward in time as well as forward; the Nobel laureate Murray Gell-Mann holds to a variant of the many-worlds view.

Jeremy Bernstein shows scant interest in this debate. His attitude seems to be “quantum mechanics is weird—now shut up and calculate!” In this he is certainly an intellectual descendant of (the happily obscurantist) Niels Bohr. Meanwhile, those who can be seen as the intellectual descendants of Einstein will continue to investigate how the phenomenon of nonlocality might lead to a deeper understanding of quantum mechanics, of information, of the structure of space itself. For them, the point of science is not just to predict outcomes of experiments, but to explain the world. 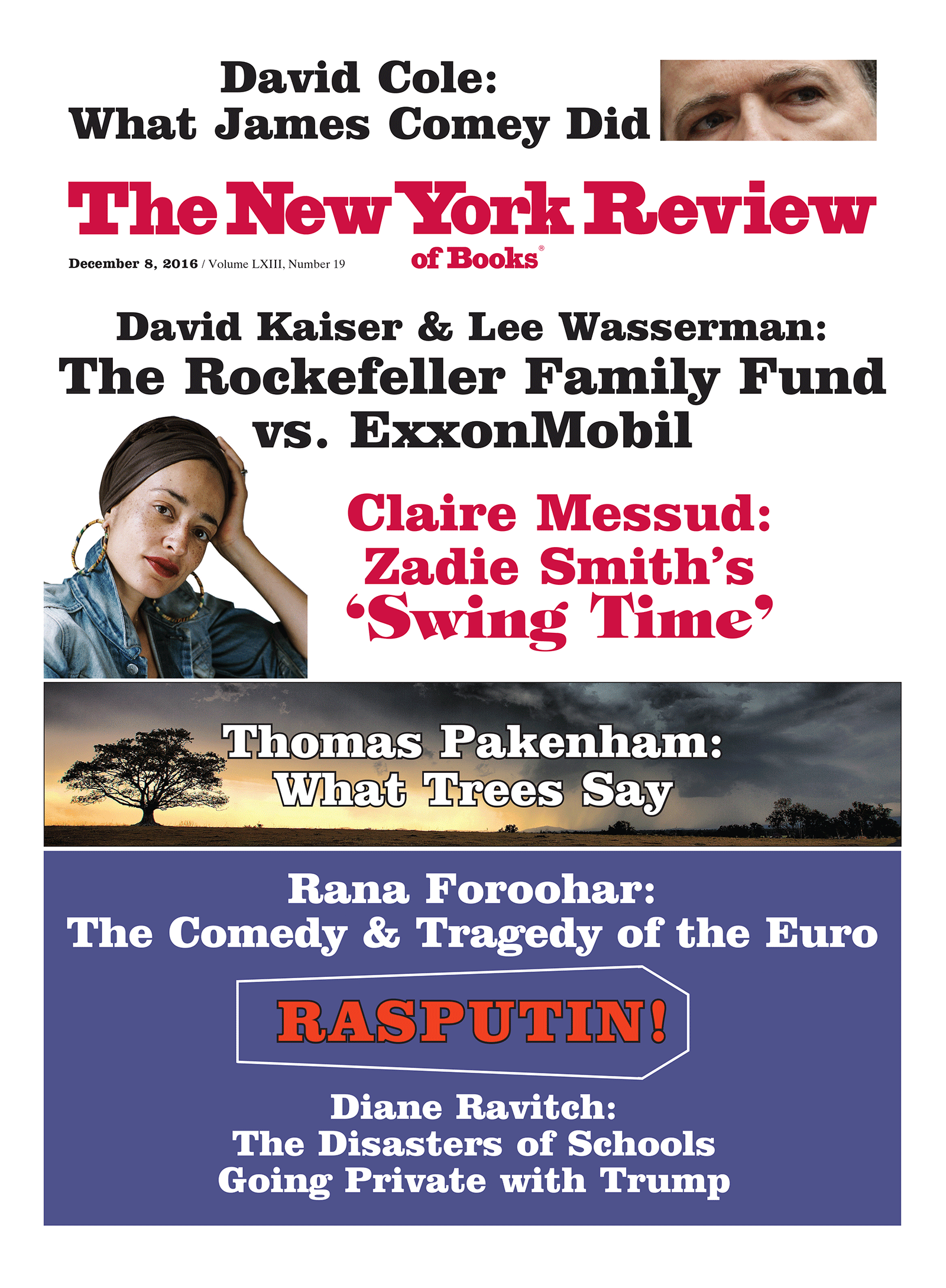 When Public Goes Private, as Trump Wants: What Happens?

The Dancer & the Dance

When Public Goes Private, as Trump Wants: What Happens?

The Dancer & the Dance

‘The Blazing World’: An Exchange

‘China Strikes Back’: An Exchange

The Trouble with Quantum Mechanics

Despite its great successes, arguments continue about its meaning and its future.

How Did Primo Levi Die?: An Exchange

An Exchange on John Brown