Preposterously premature acclaim has posited the London-based Iraqi Zaha Hadid (who turns sixty next Halloween but has yet to produce a body of built work commensurate with her hyperbolic reputation) as the world’s foremost female architect. Instead, that designation rightfully belongs to Denise Scott Brown, a truly towering figure in the modern history of the building art.

Scott Brown, who is nearly two decades Hadid’s senior, was long dismissed as a junior partner in the Philadelphia firm she heads with her husband, Robert Venturi, or reviled as a jumped-up feminist shrew. However, as she approaches her eightieth birthday next year, she has been having an easier time of it. Though the couple’s sophisticated melding of high Mannerism and pop culture rubs many patrons the wrong way, their Sainsbury Wing (1985–1991) for London’s National Gallery—the brilliant site planning of which is largely attributable to Scott Brown—has worn well. It has become as integral a part of its venerable vicinity as such nearby landmarks as William Gibbs’s St. Martin’s in the Fields (1721–1726) and Inigo Jones’s Banqueting House (1619–1622).

Scott Brown recently saw the publication of Having Words, her provocative collection of writings from 1967 to 2009. Later this year, Bob and Denise, a documentary film produced by the couple’s only child, James Venturi, will be released. (Last year, the younger Venturi made a shorter feature, Saving Lieb House, which follows the removal of the eponymous seaside residence (1967–1969) designed by his parents from its original site on Long Beach Island, New Jersey to its new location in Glen Cove, New York, via a barge that memorably navigated the Atlantic coast, New York City’s waterways, and Long Island Sound.) 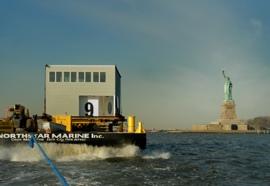 Scott Brown is now being honored with two exhibitions and symposia on what many consider her central contribution to contemporary architectural thought—Learning from Las Vegas (1972), the illustrated polemic she wrote with her husband and their late associate, Steven Izenour. In 1965, two years before Scott Brown and Venturi married, she visited the Nevada gambling resort for the first time and was mesmerized by the dazzling electronic signage of the Las Vegas Strip, not only as a manifestation of American Pop vitality but also as an inspiration for a high-style architectural response to transformations of urban forms and planning practices imposed by the burgeoning car culture.

Scott Brown returned to Glitter Gulch the following year and took Venturi with her. In 1968 they taught a research and studio course at Yale School of Architecture that served as the template for Learning from Las Vegas. That publication incited outrage from the outset among those who saw it as glorification of the roadside vernacular at its most crass and vulgar.

The controversy has never subsided. Mirthless neo-Marxists have decried the book’s non-judgmental premise as acquiescence to the rampant commercialization of the public realm by laissez-faire capitalism, while prissy New Urbanists are equally appalled by departures from traditional practices they hope to restore to town planning. But the lingering notoriety of Learning from Las Vegas has also led to the rediscovery of Venturi and Scott Brown by a younger generation thanks particularly to the advocacy of Rem Koolhaas, whose value-neutral worldview owes a huge debt to the couple’s work in general and this text in specific.

Now, an exhibition about the book and the research that went into it, “Las Vegas Studio: Images from the Archives of Robert Venturi and Denise Scott Brown,” has opened at the Pacific Design Center branch of the Museum of Contemporary Art in Los Angeles (where a panel discussion will be held on April 11). The show was on view at Yale earlier this year, along with another exhibition, “What We Learned: The Yale Las Vegas Studio and the Work of Robert Venturi and Denise Scott Brown”. This January, Yale held a three-day scholarly conference, Architecture After Las Vegas, organized by the Swiss architectural historian Stanislaus von Moos, author of the two-volume Venturi and Scott Brown catalogue raisonné. 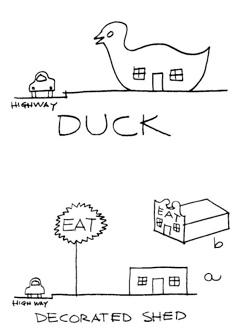 One of the event’s most surprising revelations was that the first draft of the book was written by Venturi, even though the three authors collaborated closely on its content. For years it had been widely assumed that Scott Brown was principally responsible for Learning from Las Vegas. Several of the book’s hallmark concepts are certainly hers—especially the “duck,” which she defined as a building of willful sculptural effect diametrically opposed to the generic “decorated shed,” the “ugly and ordinary” prototype championed by her and her husband. For example, they see the boxy, vibrantly patterned Doge’s Palace in Venice as a paragon of the decorated shed, whereas its multi-domed next-door neighbor, St. Mark’s Basilica, qualifies as a duck.

Any doubts about Scott Brown’s credentials as a writer on a par with her surpassingly literate spouse—who wrote the classic Complexity and Contradiction in Architecture (1966)—are put to rest by Having Words. This physically modest paperback, not much larger than a Palm Pilot, is part of the AA Words series issued by the Architectural Association, the London alternative design academy where Scott Brown studied during the early Fifties.

“A Worm’s Eye View” (1984), her highly opinionated account of (inter alia) that city’s dynamic postwar architectural scene, is a valuable record of the creative ferment that made Britain a world center of innovative architectural thought, not least because of Alison and Peter Smithson, the husband-and-wife team who served as role models for the Venturis’ personal and professional partnership.

Along with a thoughtful post-Katrina disquisition on “What Should New Orleans Do?” (2005) the two most heartfelt essays in Having Words address Scott Brown’s struggle for recognition as a woman in her male-dominated profession. In 1967, she wrote “Planning the Powder Room,” her witty yet withering dissection of public restroom design for women. “There are some areas where, in the nature of our society, personal experience is impossible for the male architect, and feedback from the public unlikely,” she writes. “I have become convinced that the architect’s lack of personal experience and involvement in what he is planning constitutes a real problem here—the more so since I imagine he is unaware of it.”

She argues obliquely but forcefully that the conception of bathrooms and their fittings, which serve the most basic of functions—architectural as well as bodily—reflects the diminished status of women in public spaces. Anyone who has witnessed the disproportionately long lines outside men’s and women’s bathrooms at concert halls and theaters will understand why this topic provides such an apt metaphor for architectural misogyny.

More scathingly, “Sexism and the Star System” (1989) lays out Scott Brown’s account of the repeated indignities she has suffered even after her superior talent was established beyond question. Those who have deemed her a retributive whiner—something often maintained in the boy’s club atmosphere of the building profession’s innermost sanctums—are here refuted with a litany of slings and arrows far worse than had been imagined. She has certainly eased the way for a rising generation of women architects, among them Hadid, who will never know the trouble she’s seen. But Scott Brown nonetheless ends on this upbeat note. “I have been helped,” she writes,

by noticing that the scholars whose work we most respect, the clients whose projects intrigue us, and the patrons whose projects inspire us, have no problem in understanding my role. They are the sophisticates. Partly through them I gain heart and realize that, over the last twenty years, I have managed to do my work and, despite some sliding, to achieve my own self-respect.

“Las Vegas Studio: Images from the Archives of Robert Venturi and Denise Scott Brown” will be showing at the Pacific Design Center branch of the Museum of Contemporary Art in West Hollywood through June 20. Denise Scott Brown’s Having Words was published by the Architectural Association, London, 2009.

Reckoning with Nazism in Occupied Norway

The Nazis had ambitious plans for reshaping Norwegian architecture and infrastructure.

Life in a Glass House

What went wrong between Ludwig Mies van der Rohe and Dr. Edith Farnsworth over the six years they worked to create the Farnsworth house?

Reckoning with Nazism in Occupied Norway

The Nazis had ambitious plans for reshaping Norwegian architecture and infrastructure.

Life in a Glass House

What went wrong between Ludwig Mies van der Rohe and Dr. Edith Farnsworth over the six years they worked to create the Farnsworth house?

Martin Filler's latest book is Makers of Modern Architecture, Volume III: From Antoni Gaudí to Maya Lin, a collection of his writing on architecture in these pages. (May 2021)