The Theatre of Revolt

It is distressing to come to the end of a book that has been written with care and attention and feel such a peevish grudge against it that fair criticism seems impossible to achieve. Perhaps it is best in such a case to try to analyze the grudge rather than the book, so that one’s prejudice can be shown openly and subjected to a proper discount by the reader.

Certainly, the grudge begins with a personal horror of most intellectual writing about the theater. One does not feel this horror about the intellectual writing of the past: it is always a pleasure to read Hazlitt, Swinburne, Wilde, Shaw, Eliot, and Beerbohm because their language is so lucid and agreeable and their dramatic sense so exciting and easy to share. Shaw, for example, was almost as intellectual as you and me, and yet he always leaves the impression that thinking is a great joy, and writing an apparently spirited business. Were he to discuss Pirandello, he would not write:

Thus, in Six Characters, the six (eirones, pharmakoi) try to persuade the actors and their manager (alazones) to publicize their fictional private lives; and in Tonight We Improvise, the actors (eirones) are finally forced to throw the director (alazone) out of the theater in order to expose the inner souls of their characters (pharmakoi). In the theater trilogy, the conflict between the eirones, pharmakoi, and alazones no longer serves to make a social point, but rather to illustrate the different levels of reality which the stage encloses.

Of course, when Mr. Brustein writes such a paragraph, he doesn’t do so out of the blue: he has told us beforehand what eirones and alazones and pharmakoi are and paid decent tribute to the intellectual who first thought them up and laid them on. But do they make Pirandello easier to grasp? One hopes so, because they certainly make Mr. Brustein difficult to read.

The grudge begins, then, with the involved nature of the writing, and one asks why critical literature has become like this, and when the change took place. So far as one can tell, it is largely a consequence of Freudian researches “in depth”: the theater—and virtually any other subject that commands intellectual attention—is examined with such profundity that its mysteries become abysmal. By comparison with Mr. Brustein and his peers, critics like Shaw and Eliot are neither critics nor intellectuals. They are merely representatives of an old school of “surface” criticism: they play with what is visible to the eyes, audible to the ear, understandable to the mind, and suspect nothing whatever below these superficial expressions.

This is where the grudge gets sharper. For, intellectual theater critics are not, it seems, particularly interested in the theater—not, certainly, in the excitable way that Swinburne and Hazlitt were. Their interest is not so much in stage-characters as in the characters of those who write for the stage: they are prepared to discuss—and at great length, very often—that finished product which we call a play, but only in relation to the events that preceded it off-stage—to the psychological strains and stresses in the playwright’s life, to his relations with women, to his feelings about his mother, to how his father behaved when the playwright was a boy. The consequence of this is that the actual play which appeared in the theater—the play that made the author important enough to warrant intellectual discussion at all—is stirred back into the mud puddle from which it came, and what was once dramatic criticism becomes largely an exercise in human biography.

Thus, Mr. Brustein says: “the roots of Strindberg’s art are…clearly sexual and pathological” and “it is impossible to analyze Strindberg’s work without some reference to his life…” But do the things he proceeds to tell us about that life add anything at all to our understanding of, say, The Father? Is it a muddled, barely comprehensible play? Is it so inadequate that it needs its author’s dossier to fill it out? Or is it one of those rare plays that hits home so strongly and effectively that the home-life of the author seems just a clumsy reflection of what happens on the stage? After all, the talent that made the play is what matters, not the lack of talent that distinguished the maker’s private life.

By always keeping one foot in the author’s psyche, the “depth” critic is always in danger of giving a bad intellectual reason for a fact that is too plain to need it. Mr. Brustein believes, for example, that Pirandello was driven by a “messianic urge” and that consequently when he wrote Tonight We Improvise, he was obliged by this drive to write down all the “improvisations” himself, instead of allowing the actors to invent them. This explanation shows how far the critic has drifted from contact with the theater as it really is. Actors have many gifts, but brains is not one of them. They can improvise gestures, movements, and even a certain amount of simple dialogue. They can grasp simple situations and, with the help of a good director, play admirably parts that they find barely comprehensible. But the actor was never born who could not only follow a highly intellectual author through the mazes of his fantasies but think up for himself the improvisations necessary to their presentation.

A graver result of Mr.Brustein’s psychological interest in the dramatist affects the whole thesis of his book. As his title suggests, Mr.Brustein believes that all modern theater of importance is a theater of “revolt.” He believes further that the eight principal dramatists of the past hundred years—Ibsen, Strindberg, Chekhov, Shaw, Pirandello, O’Neill, Brecht, Genet—make sense, or fall into a unity, only if they are all considered as rebels, this being the psychological condition that is common to them all. Mr.Brustein traces this attitude back to the disappearance of God from the human scene: the playwright, left on his own, must somehow declare his independence—a need that was not felt by authors such as Aeschylus and the writers of Christian morality plays.

Certain awkward problems arise from sticking to this thesis. First, we reflect that the spirit of revolt begins in the very infancy of the theater with Euripides and Aristophanes, runs strongly through the Elizabethan and Jacobean plays, permeates the theaters of Molière, Hugo, Goethe, and Schiller and, in fact, shows itself whenever censorship is not too strong for it. Can we hope to understand modern drama better if we cut it off sharply in mid-nineteenth-century and inspect it as a thing that is spiritually apart? How, if revolt is our point of departure, can we overlook it in, say, Coriolanus, Le Misanthrope and Dr. Faustus, but insist upon it in The Cherry Orchard and The Wild Duck? Mr. Brustein seems to be aware that we cannot really behave like that, but he seems to think that it is necessary to overlook a great deal if his thesis is to survive—which is never a very comfortable way of going about things.

One wonders, secondly, whether “revolt” is really the right word to pin onto many important works of the last century. One can, if one insists, see The Cherry Orchard as a work of revolt against decadence, but it seems a pity to do so when the author was at such pains to mix his elements and present all his characters with an ineffable gentleness. And what of Hedda Gabler? The play is about a woman in revolt. But is the author in revolt? To the “surface” critic, he appears to be most cruelly detached from the fate of his wonderful creation.

By putting all important modern plays under the heading of revolt, Mr. Brustein both kills the meaning of the word “revolt” and does a lot of damage to the spirit in which many of the plays were written. Pirandello tells us: “Basically, I have constantly attempted to show that nothing offends life so much as reducing it to a hollow concept”—this is a good, broad definition of his work and though it implies a degree of revolt it carries the plays so far beyond mere revolt that any attempt to enclose them in this description must reduce them to the very “hollow concept” they have managed to escape. It must also dull the critic’s appreciation of what this particular author has to offer: when Mr. Brustein says: “Pirandello is not an artist who really develops,” or “As for his dramatic structure, it is extremely conventional, when not downright haphazard,” one is bound to be amazed at the critic’s failure to recognize not only the playwright’s diversity of thought but the astonishing skill that was required to transform so many intellectual concepts into dramas of passion.

The conclusion seems to be that if plays are criticized by Mr. Brustein’s method, almost any desired conclusion can be reached and almost any thesis maintained. For the method is not applied to the plays; it is applied to the playwrights, and when this is done the playwrights show in their lives and struggles all the raw and disorganized absurdities that they have managed to keep out of their best plays.

Mr. Brustein’s chapter on Brecht, for example, is concerned primarily with the rebellious workings of the playwright’s mind. But Brecht’s revolutionary attitude was the most commonplace thing about him—which is why it is so necessary for the critic to proceed beyond that point and concentrate chiefly on the dramatic cunning and imaginative techniques that turned very ordinary thoughts into unusual plays. The theme of Mother Courage, for example, is nothing but a Radical platitude: our interest in the play is only in considering how, and to what extent, the artistry overcomes the platitude and succeeds in exciting our imagination.

What makes the modern theater appear to be a theater of revolt is not so much the death of God as the availability of personal biography. Were this to turn up and show us just what went on in the psychological depths of Aeschylus, Sophocles, Shakespeare, and other non-moderns, we might reach the simple conclusion that the spirit of revolt exists in every interesting playwright but plays no part in the making of an interesting play. 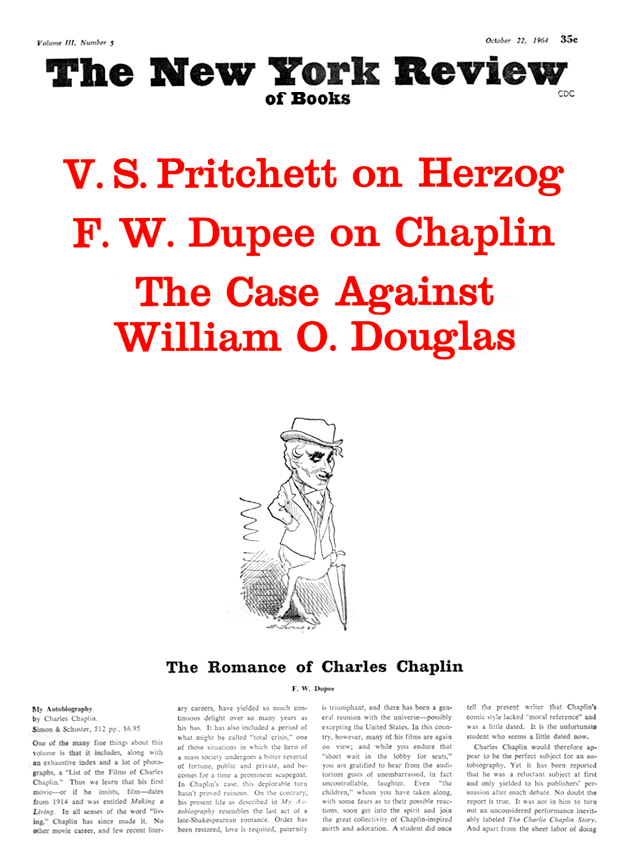 Smiles in the Dark

Smiles in the Dark

Nigel Dennis (1912–1989) was an English writer, critic and editor. His books include Boys and Girls Come Out to Play and An Essay on Malta.

The Disaster at Lincoln Center