All Things Common: The Hutterian Way of Life

Ever since Christianity compromised with the Roman Empire, there have been sects who have insisted on going back to its original source, the New Testament, and its original form, the primitive Church of the Apostles. Most of these sects have been short-lived. Either they have been persecuted out of existence by the established Churches or they have themselves, after a few generations, compromised with the surrounding society and been absorbed by it. The only sects which have preserved their original character for several centuries are the two most uncompromising relics of the sixteenth-century Anabaptist movement: the Amish and the Hutterites.

I call both “relics,” for neither of them seeks to make converts. Both also are stubbornly retrospective: They do not believe in change but cling to their image of primitive Christianity. Yet neither is static. Both, by natural increase, are multiplying faster than their neighbors. And, paradoxically, both these heroically non-conformist, unmodernizable, unassimilable sects live, and live only, in the most conformist, most modern, most assimilative society in the world: the society of Anglo-Saxon North America. As social organisms, as practical evidence of the vitality, tenacity, and persuasive power of a way of life which theoretically would seem completely impossible, both deserve sympathetic and intelligent study. The Amish have received it in Mr. John A. Hostetler’s Amish Society.1 The Hutterites have now received it from Mr. Victor Peters.

THE HISTORY OF THE HUTTERITES is, in general, no different from that of other Anabaptists. It is a history of perpetual migration. Always they have moved from persecution in settled lands to welcome an opportunity in undeveloped lands; always settlement has overtaken them; and always the overtaking society has tried to assimilate these angular pioneers. Sometimes it has succeeded. But when it has failed, it has often turned again to persecution. At one time the persecution has seemed religious, just as anti-Semitism once seemed to spring from religious antipathy. More recently it has found other forms. What is constant is the pattern: a social pattern.

With the Hutterites the pattern began in the Germany of Charles V. It was repeated first in Moravia, then in Hungary and Transylvania. From all these places they were driven out once the Habsburgs—that is, Catholic society around them—insisted on religious—that is, social—conformity. Then they moved through Turkish Wallachia into the Ukraine. From that time onwards they have never lived in Catholic lands. They have thus been free from religious persecution. But this religious freedom has only obliged social pressure to assume other forms. In particular, it has assumed the form of opposition, in time of war, to their pacifism. It was when the Czars—that is, Russian society—insisted that they should become good Russians, speaking Russian instead of Tyrolean German and serving in the Russian army, that they left for America in 1874. But even in America the pattern was repeated. In 1917, when the United States entered the First World War, their neighbors in the Dakotas insisted that they become good Americans and join up. So they left for Canada. Since 1939, when Canada was at war, their neighbors in Alberta and Manitoba have periodically demanded that they become good Canadians. This opposition has continued in other forms. Press campaigns have been waged, discriminatory laws demanded and sometimes enacted. But so far, the Hutterites have survived. They thrive and multiply. There are now 10,000 of them in Canada, and their rate of increase is the highest in North America. A gloomy professor of soil science (in Alberta) has calculated that by A.D. 2302 there will be over 20,000 million of them.

Twenty thousand million communists on the American continent…The mind boggles. No wonder there is alarm in Alberta. For the Hutterites, unlike the Amish, are communists, primitive puritan communists like the first apostles, and have been since 1528; and this way of life they preserve by cutting themselves off from the world without and living self-enclosed within their own “colonies.” Each Bruderhof of 80 to 200 people is an agricultural family, like an Israeli kibbutz or a Chinese commune; but it is not only or mainly an economic organism. It is a church which has chosen this organism as a means to realize religious beliefs and a religious way of life. Their neighbors, though respecting their virtuous simplicity, dislike the Hutterites for being unassimilable and rationalize their dislike: The Hutterites, they say, do not vote, do not fight, do not spend locally, and by their unnatural economy prosper at their expense. Why will they not surrender? Why will they not accept “the best education available”? But the Hutterites are wise in their generation. Their main concern is not to be educated, or modern, but to preserve their way of life. They have seen other such groups waste away by compromise. They themselves wasted away in Germany where the society around them was insufficiently distinct from them. As Mr. Peters remarks, they need to be distinct: German islands in a foreign—Slavonic or Anglo-Saxon—sea. Such insularity is a convenient, natural barrier against assimilation.

THERE ARE ALSO artificial barriers. Like the Amish, the Hutterites are indoctrinated from birth, cling to archaic external customs, oppose higher education, and keep in reserve the formidable weapon of Meidung or excommunication. Living communally, they have some advantages over the Amish: Social pressures are closer, foreign temptations more remote. They can therefore afford some concessions to modernity which the Amish do not make. They admit that Trojan horse, the public school—provided it is for them alone; and even then they must continually tap and test it for the clink of arms within. They also compromise with machinery—provided man is firmly in control. They will have telephones, but not radio or television: Admit them, and “you are no longer master of your own home. You invite alien and un-Christian influences into your living room.”

Such peculiarity disturbs conventional society. The neighbors of the Hutterites, in Europe or America, may profess respect but they have always feared them. These amiable heretics seem harmless, even admirable. They are very few. There is no crime among them, no immorality. They pay taxes. They farm well. And yet how easily the world splutters at such religious collectivism! Last year Mr. Paul Conkin published a book, Two Paths to Utopia,2 largely about them. Mr. Conkin is a confident, commonplace writer, entirely satisfied with his own standards both of writing and of thought. But whenever he approaches what might be seen as virtue in the Hutterites he flinches. He drops a few cold antiseptic terms, or he discovers that these apparent virtues are really convealed vices. The Hutterites, he says, are “extremist, fanatic, reactionary.” They are “enslaved by archaic, obviously false and dangerously absolute concepts.” Their success in surviving is “frightening.” Even their frugality and solvency are no merit in the eyes of this profound social analyst: “Their outward solvency,” he assures us, is “only a camouflage for much hardship and a severely restricted living standard.” Real solvency, it seems, consists in living high and going broke. Reading Mr. Conkin, I seem to hear the age-old protest of mindless conformity. It is the cri de coeur of a thirteenth-century Cahorsine bank clerk at the mention of Albigensian heresy or of a sixteenth-century canon of Cologne who has heard someone question the eternal damnation of Mennonites.

No understanding comes his way. But Mr. Peters is different. He has tried to see the Hutterites sympathetically, as a social experiment based on and permeated by a powerful—because recurrent and permanent—religious motivation. He seeks to understand and explain. Having myself an interest in the sociology of religion, I found his clear and perceptive book fascinating and I congratulate the Manitoba Historical Society which has launched a series of such studies. The book was originally a thesis of the University of Manitoba, and as such it was read by Mr. Conkin, who condescendingly describes it as “rambling.” Whether it rambled in its thesis form or only in Mr. Conkin’s impatient mind is irrelevant. It is an excellent study of the history, the organization, and the external relations of a strange and therefore interesting human society. 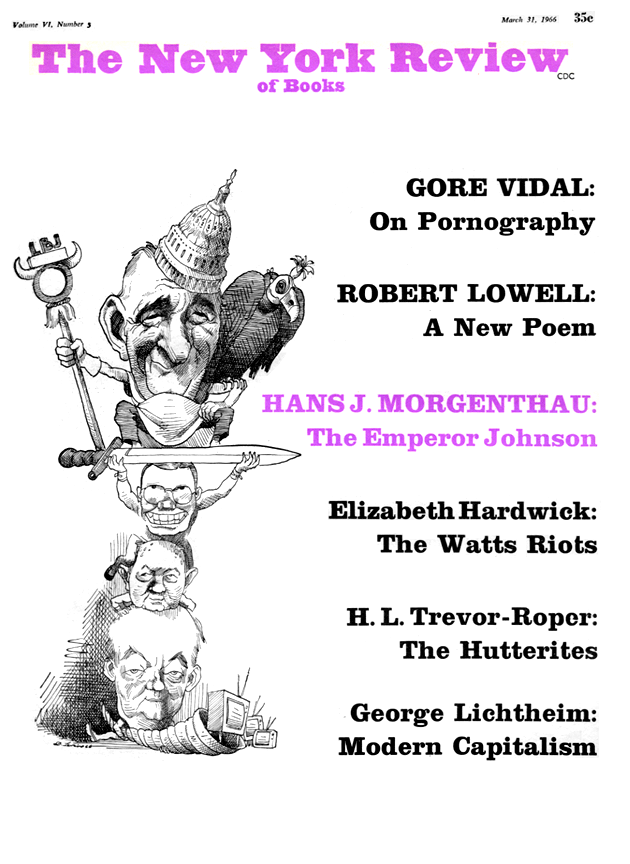 Was Giordano Bruno a Mole?

Was Giordano Bruno a Mole?

H. R. Trevor-Roper (1914–2003) was a British historian and the author of The Last Days of Hitler. He taught at Oxford, where he was the Regius Professor Modern History.

Catholics, Muslims, and the Mosque