There has always been curiosity about the early version of T. S. Eliot’s Waste Land, submitted to Ezra Pound and to some extent altered by Eliot in accordance with Pound’s suggestions. One had always imagined that it must have been preserved among the papers of John Quinn, the rich New York lawyer who acted as a patron to Eliot and acquired many of his manuscripts. This suspicion has turned out to have been correct. The manuscript has been found by a niece of Mr. Quinn’s, Mrs. Thomas F. Conroy, who has sold it with other manuscripts to the Berg Collection of the New York Public Library; and it has now been published by Harcourt Brace Jovanovich: The Waste Land, A Facsimile and Transcript of the Original Drafts, Including the Annotations of Ezra Pound, edited by Valerie Eliot.

An article on the subject had already appeared in the London Times Literary Supplement, which gave a very fragmentary preview. It was revealed that the poem was originally to be called He Do the Police in Different Voices, and this was soon identified (TLS January 1, 1969) as derived from Chapter XVI of Dickens’s Our Mutual Friend, in which Sloppy, a foundling, is employed by Betty Higden as a boy-of-all-work and reads aloud to her from some paper like the Police Gazette, apparently imitating the characters.

It is obvious that Eliot meant to refer to the different voices of the poem: Boston Irish, cockney, the literate English of the much read young Harvard spokesman, brooding on his dissatisfactions, which recall many echoes from literature. But the result of this new discovery was to give a new priming to the pump of the Eliot industry. It was now said that, in order to grasp The Waste Land properly, it would be necessary to study not only the books which Eliot mentions in his notes, but to reread the whole of Our Mutual Friend. Is Sloppy the same person as the Tiresias of the poem? Does not water, especially the Thames, play a recurrent part in both Our Mutual Friend and The Waste Land? Is the dust mentioned in The Waste Land not connected with the dust piles of Mr. Wegg?

These speculations were carried to the point of absurdity and, in the course of a long correspondence lasting for three months, the allusion-hunters were rebuked by a Mr. Douglas Hewitt, who says sensibly that

A great deal of criticism of Eliot assumes that a quotation from another work implies that the whole of that work is to be borne in mind while we read the whole of the poem and that a complex unity will finally emerge from this accumulation of associations…. My argument is that Eliot often uses the quotations and echoes more locally than this. I suspect the cancelled title of being down-right frivolous and I am appalled at the thought of all those forthcoming theses which will labor every parallel between the two works and misrepresent Dickens when he does not fit in with Eliot’s vision.

The most obvious thing to say about this early draft of The Waste Land which was operated on by Ezra Pound is that Pound did extremely well with it, that he really produced from Eliot’s rough version a more or less Poundian work more successful than anything on a similar scale he had been able to do himself. He saved Eliot from many ineptitudes. Here we see for the first time the long passage in heroic couplets which Pound induced him to cancel—though Eliot says that he himself thought them “excellent.” “Pope has done this so well,” advised Pound, “that you cannot do it better: and if you mean this as a burlesque, you had better suppress it, for you cannot parody Pope unless you can write better verse than Pope—and you can’t.”

This advice was certainly sound. One is astonished at the mediocrity of which Eliot was capable here. He was decidedly not at his best when he was trying to be arch and sophisticated. Pound also rescued Phlebas the Phoenician, whom Eliot had wanted to discard, and dissuaded him from printing “Gerontion” as a kind of prelude to The Waste Land. He checks Eliot’s occasional uncertainty in some statement as to what is happening, reminding him that since the spokesman of the poem, Tiresias, is supposed to know about everything, the poet cannot himself be uncertain. On the other hand, he sometimes made recommendations which Eliot did not accept. He criticized as “too penty” one of Eliot’s best lines.

Yet there the nightingale
Filled all the desert with inviolable voice.

The substitution of five syllables for a regular iamb here is masterly and what gives the line its magic.

It is curious to see Eliot hesitating and not hitting the nail on the head. Clive Bell said that Eliot’s poems showed a wonderful instinct for “phrasing”—and so they do, but these drafts do not. It is not entirely Pound’s advice which has pulled Eliot’s lines so tight and given them so much significance even when allusions and borrowed words must be unrecognizable to many readers. This Eliot has done mostly himself; and it is striking that almost nowhere in these unfinished drafts or in the drafts of associated poems can one identify a single passage, even a single line, which is identifiable as Eliot’s best.

The selection of what is to be kept has been made with unerring taste. The oddest excision, and one of the longest, is that of the beginning of the poem, preceding “April is the cruellest month,” made by Eliot himself. The opening of the poem was originally a monologue, a little in the vein of Hemingway, in which a narrator, who is evidently Irish—since all the names are Irish and there is a snatch from an Irish song—seems to revert to a scene in South Boston. This narrator has got very drunk “at Tom’s place” and goes to a brothel where a woman named Myrtle, who had been raided the week before and wants to retire to a farm, tells him he is too drunk and unshaved for any of the girls to go to bed with him, “but she gave me a bed, a bath, and ham and eggs.” Leaving the brothel, he is picked up by “a fly cop,” apparently for urinating in the street, but he is rescued by a man he knows, with whom he goes off in a cab. The cabman and another occupant of the cab get out to “run a hundred yards on a bet…so I got out to see the sunrise, and walked home.”

This picture of vulgar demoralization is intended, I suppose, to set off the anguish of the cruel April and to associate itself with the “stony rubbish” from which the poet is longing to be delivered. It implies desperation and adds to the incoherence of the accents of hopeless despair and invincible impotence that follow. Phlebas (“Death by Water”) is introduced by another long passage (mostly in blank verse) which was perhaps originally intended to counterbalance the South Boston narrative and tells the story of a fishing expedition off the New England coast:

Then came the fish at last. The eastern banks
Had never known the codfish run so well.

These American memories seem incongruous, sandwiched in with the London impressions.

Bleistein of “Burbank with a Baedeker” puts in an unexpected and rather puzzling appearance as the drowned man in a travesty of the Shakespearean “dirge” from The Tempest:

Full fathom five your Bleistein lies
Under the flatfish and the squids.

Bleistein in the other poem is evidently a vulgar and well-to-do Jew, who gets the Princess Volupine away from Burbank. But what exactly did Bleistein mean to Eliot? In the “Dirge,” it is said of him:

Though he suffers a sea change
Still expensive rich and strange.

Is his being left at the mercy of the fish intended to humiliate him, although the poet seems to feel for him a certain lurking respect?

The somewhat related poems such as “The Death of Saint Narcissus” have also been searched for good lines exploitable in a better setting:

The wind sprang up and broke the bells
Is it a dream or something else
When the surface of the blackened river
Is a face that sweats with tears?

The whole composition of The Waste Land is a curious and striking phenomenon. Pound and Eliot between them have managed to concentrate an intensity of image and feeling which is not to be found in these drafts, where the brilliance of the finished work is nowhere in evidence. It is partly Eliot’s instinct for drama, so much more effective here than it usually is in his plays, which makes telling the abrupt contrasts and the laconic notations and comments—an instinct which Pound in his Cantos in general fails to exercise. The Waste Land, remaining incoherent, is vivid; these drafts are extremely blurred.

Mrs. Eliot has been most conscientious and has practiced an admirable lucidity in disentangling this complicated text—a task which involved distinguishing between Eliot’s own criticisms, those of his first wife, and those of Ezra Pound, which last are given in red. The only point which, so far as I know, has been omitted in the notes on the drafts, though Mrs. Eliot quotes the relevant passage from Dante, is the meaning of “Another” in Eliot’s line, “And if Another knows, I know I know not.” Ulysses, in Dante, is referring to God: his ship is condemned to go down because he has been so impious as to venture beyond the Pillars of Hercules, the straits of the Mediterranean—“com’ Altrui piacque“—but God’s name cannot be pronounced in Hell. One assumes that Eliot’s ship is also doomed. It seems to be heading for a precipitous shore:

My God men there’s bears on it.
Not a chance. Home and mother.
Where’s the cocktail shaker, Ben here’s plenty of cracked ice.
Remember me.

And the drowned Phlebas immediately follows. 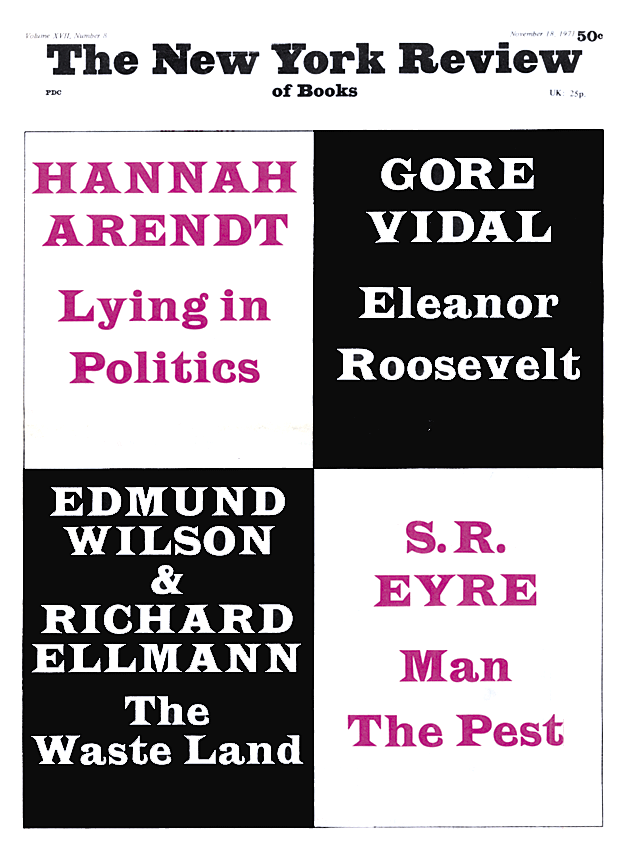 Notes from the Thirties

Edmund Wilson On Writers and Writing

Notes from the Thirties

Edmund Wilson On Writers and Writing

Edmund Wilson (1895-1972) is widely regarded as the preeminent American man of letters of the twentieth century. Over his long career, he wrote for Vanity Fair, helped edit The New Republic, served as chief book critic for The New Yorker, and was a frequent contributor to The New York Review of Books. Wilson was the author of more than twenty books, including Axel's Castle, Patriotic Gore, and a work of fiction, Memoirs of Hecate County.