The Best of Sholom Aleichem

Sholom Aleichem is one of the prolific masters of Yiddish comic storytelling, an art springing from the oral folk tradition of Eastern Europe and crossed by the pain and laughter of racial calamity. Like all comics he is serious, has one foot in the disorder and madness of the world and, as a Jew, the other foot in the now perplexing, now exalted adjuration of the Law and the Prophets. Did God really choose their fate for the Jewish people? If so, was He being irresponsible, or why doesn’t He make it clear? There is no answer. The oppressed stick to their rituals and are obliged to perfect the delights of cunning, the consolations of extravagant fantasy, the ironies and pedantries of the moralist who is privately turning his resignation into a weapon. With so many insoluble dilemmas on his hands, Aleichem developed that nimbleness of mind and fancy, those skills of masking and ventriloquism that made him the prolific “natural” in short tales drawn partly from the remaking of folk tradition, a juggler of puns, proverbs, and sudden revealing images caught from the bewildered tongues of his people.

There are certain distinctions to be noted when we speak of the general Jewish gift for anecdote. These are made clear in the exchange of letters between Irving Howe and Ruth Wisse which introduce their selection from a striking variety of Aleichem’s best work and discuss the growth of mind it reveals. Mr. Howe points out that Aleichem is not a “folksy tickler of Jewish vanities” and is not as cozy “as later generations of Jews have liked to suppose.” Under the laughter is fright and the old driving forces of anxiety and guilt: if Aleichem is close to folk sources he escapes the collective claustrophobia of a folk tradition that was broken by the pogroms and wars that drove the Eastern European Jews to flight or death; he has let in the light of “a complicated if individual vision of human existence. That means terror and joy, dark and bright, fear and play.”

Ruth Wisse points to Aleichem’s position in the period when the Jewish moral crisis came to a head in Eastern Europe. Writing of his contemporaries, the classical masters Mendele Mocher Sforim and I.L. Peretz, she says that they are embattled writers, “critical of their society,” strong in dialectical tendency, pitting old against new; whereas Aleichem, who also felt the break in the Jewish tradition and in his own life, “made it his artistic business to close the gap. In fact, wherever the danger of dissolution is greatest, the stories work their magic in simulating or creating a terra firma.” I do not know the work of these writers but it is certainly true of Aleichem’s work that it shows his balance and poise in tales like “A Yom Kippur Scandal,” “Station Baranovich,” the terrifying “Krushniker Delegation,” “Eternal Life,” and above all in the four grave Tevye tales. As he tries to face his daughters’ rebellion against tradition Tevye becomes, tragically, something more than a folk figure: he becomes a man.

Aleichem has the style of the spontaneous talker, at home in many garrulous idioms; it is a style that plays as it moves forward dramatically and then, hit by an image or a proverb, circles back. The narrator’s mind is continually split between what is happening and something else, some fear, some scheme, some hope that is going on in his mind. He acts on impulse and regrets at once; always escaping from his situation, he is back in it only to find it changed, usually for the worse. He writes as a man backing away from the next minute and going headlong into it. Nearly all of Aleichem’s people are whirled around by their imaginations, addressing fate, knocked this way and then that by scripture or the proverbs—“When a soup’s bone is stuck in someone’s face who doesn’t give it a lick?” On second thoughts “You can skin a bear in the forest but you still can’t sell its hide there.” Speculation is their anguish. They burn with a fever. “My blood began to whistle like a kettle.” Aleichem’s powers of invention pour out of the language he utters. The innumerable surprises of language so entangle us that we are caught out by the vaster surprises of the tale. In catching us out, his art shows its depth.

Aleichem’s people themselves belong to a storytelling culture. He is as astonished and disturbed by his bizarre tales as we are and uses the device of not bringing them to an end, sometimes in order to show that the meaning of the tale has been hidden and we must work it out for ourselves or go on making it up on our own. This is evidence of a very self-conscious art, as Mr. Howe says.

A clear example is “A Yom Kippur Scandal.” A stranger comes to the synagogue and overcomes mistrust by handing out silver coins, but when the rituals are over, he suddenly screams out that he has been robbed of 1800 rubles, on the holiest day of the year. He had put the money into the praying stand and it has gone. The rabbi and his congregation turn out their pockets. Only one person refuses. He is a young man notorious for knowing the Talmud by heart, for being a master of Hebrew, arithmetic, algebra, unequaled in chess—perfection. The congregation argue with him, he begs to be spared, but they throw him to the ground and, going through his pockets discover only a couple of gnawed chicken bones and a dozen plum pits still wet from chewing.

You can imagine what an impression this made—to discover food in the pockets of our prodigy on the holiest of fast days. Can you imagine the look on the young man’s face, and on his father-in-law’s? And on that of our poor rabbi?

But what about the 1800 rubles? Never found. Gone forever, says the storyteller, and never explains. We can suspect, if we like, that the stranger had invented the drama, to cover up the fact that he had stolen his employer’s money. But Aleichem does not explain. Why not? Because the deeper sin than the sin of theft is the sin against God and His Law? Aleichem still doesn’t say. We are perhaps left to search our own souls. Who knows?

“Station Baranovich’ is another tale that stops short of its ending. It is told by a Jewish stranger on a train and is an event that occurred in czarist times. A loose-tongued bartender called Kivke starts a religious argument with peasants on a Sunday. He is reported to the police and is sentenced to be stripped naked and run the gauntlet of a line of cavalry officers who will whip him. The Jews unite to plot his escape. They fake the death of Kivke in prison, arrange a mock funeral, and get him out of the country. His shows his gratitude by blackmailing them for larger and larger sums of money now that he is free. The final threat is to report the whole thing to the Russian Commissioner. But at this point the train stops at Baranovich and the teller of the story jumps out. What happened next, what is the end? the listeners shout. All they get is

“What end? It was just the beginning”

and he is gone. Aleichem says

May Station Baranovich burn to the ground.

What does he mean? Ruth Wisse says it sounds like a protest against his own art or a defense of it. More likely it seems to me that the end being “just the beginning” evokes the only too familiar frightful prospect that awaited the Jews of that village, a further test of their emotions, their ingenuity as an oppressed people.

Aleichem’s humor has a double edge; it is concerned a good deal with trickery or with efforts to bring off a successful or kind action which come to disaster because of some helpless absentmindedness. In “Eternal Life” the green young theological student who lives under the thumb of his mother-in-law volunteers, out of a desire to do a good deed that will win him Eternal Life, to take the body of a dead mother to the burial ground, because the father cannot leave the house and has no sleigh. The journey through the blizzard is terrible, so terrible that he cannot remember the name of the dead woman. So he is mad enough to make up the tale that the body is his mother-in-law’s; she has died of fright. The inspector of the Burial Society asks, What sort of fright?

My tongue seemed to stick to my palate. I decided that, since I had begun with lies, I might as well continue with lies, and I made up a long tale about my mother-in-law sitting alone, knitting a sock, forgetting that her son Ephraim was there, a boy of thirteen, overgrown and a complete fool. He was playing with his shadow. He stole up to her, waved his hands over her head, and uttered a goat cry, Mehh! He was making a shadow goat on the wall. And at this sound my mother-in-law fell from her stool and died.

Again and again, the storyteller invents other selves when he dramatizes a dilemma. Yet this story is not mechanical farce; it passes through the moods of youthful exultation and sorrow, and as the blizzard drives him almost into sleep on the sleigh, the idea of Eternal Life has the sweetness of death and then turns to terror, for the wind seems to be the voice of the dead woman on the sleigh. She seems to accuse him and say, What are you doing to me young man? Destroying a daughter of Israel who has died?

In this story we move through joy, exaltation, fear, and farce, as if these were a weather in which the people live. Indeed in all the stories, the feelings bound from one to another. The characters repeat themselves with comic fervor, as if searching for guarantees; they dramatize themselves as if they were momentary universes. Each in turn is the only one who loves, hates, scolds, whines, tricks, or believes. In their voices these people, who have no land, have their territory and thus Aleichem has written its history.

Irving Howe notes that the Mottel farces introduce a Tom Sawyer-like note, which one does not hear in the adult stories. I notice something like a theme of Flann O’Brien’s in one of them, “My Brother Elye’s Drink.” It is about a boy out to make a fortune out of homemade Kvass and ink, and who even offers to rid his town of mice. One can see Aleichem’s instant, restless eye unfitted him for the novel. As the Tevye stories show he could be grave without encumbering himself with novelistic architecture. One surprise is the almost complete lack of erotic or mystical fantasy, such as we find in I.B. Singer. 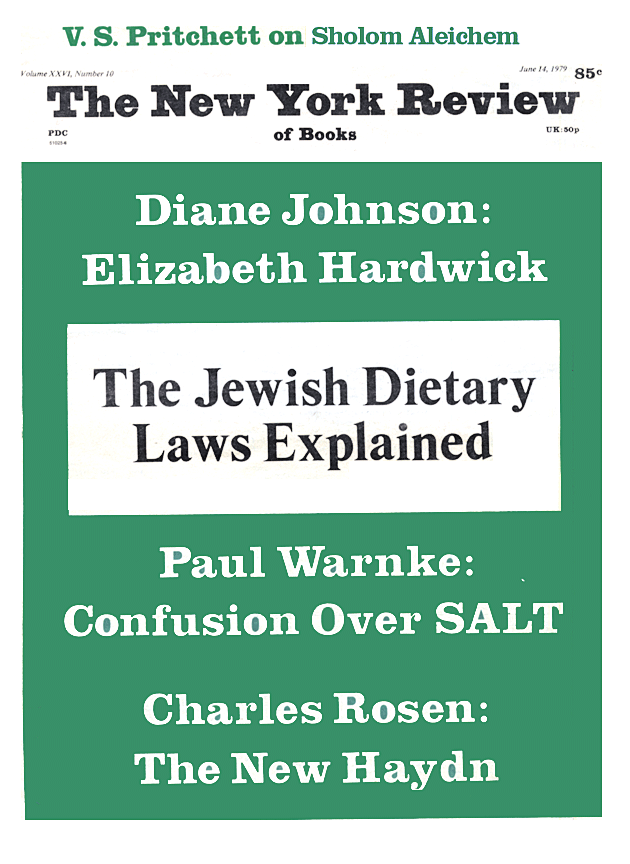 V.S. Pritchett (1900–1997) was a British essayist, novelist and short story writer. He worked as a foreign correspondent for the The Christian Science Monitorand as a literary critic forNew Statesman. In 1968 Pritchett was made a Commander of the Order of the British Empire; he was knighted in 1975. His body of work includes many collections of short stories, in addition to travelogues, reviews, literary biographies and novels.