This is Diane Johnson’s first novel for eight years, and it has a sort of discursive and amiable quality which is somewhat new in her work. The book’s background is Iran just before the fall of the Shah; a group of Iranians and temporarily expatriate Americans are observed by a keen but affectionate eye over a period of a few weeks. There are no heroes or villains, nor—as always in her books—is there an ending in the formal sense. The story stops and the future of the central character, Chloe Fowler, is not told us.

Chloe and her husband Jeffrey are to fly out to Iran, he on a medical mission and she to do some work on antique pottery (like the husband in Loving Hands at Home, Jeffrey is a surgeon—not, it seems, a profession that Johnson loves). At the airport a message arrives to say that Jeffrey’s partner has had a serious accident, and Jeffrey urges Chloe to go on to Tehran alone while he goes back to deal with the emergency at home (a disingenuous suggestion, as it turns out). He never does join her, and Chloe, prettyish and thirtyish, explores sans husband or children the American/Iranian circles of Tehran.

Nothing much, in the plotty, fictional way, really happens. Chloe watches and enjoys and has some sexual adventures; and—since violence is never far from the surface in Diane Johnson’s novels—there is an episode of shooting and murder. Mainly, violence is hidden behind the veils of the women, in ambiguous street gestures, in a kind of haze of something impending. Diane Johnson is as much concerned with Persian exoticism as with ugliness and oppression, with the mixture of ancient and modern that meets Chloe’s Alice-in-Wonderland gaze. When she goes shopping in a Tehran supermarket she sees not only the familiar words Procter & Gamble and Nestlé but also “a beautiful tin of tea with golden camels on it, and a bottle of skin cream, which showed a ravishing woman hidden behind her veil, promising some Cleopatran secret.” Chloe buys them. The title itself of the book suggests something of an old-fashioned travelogue novel, a leisurely and romantic examination of the inscrutable foreign scene, a novel of place. A little curlicue of half-ironic decoration is added by the lush quotations from Fitzgerald’s Rubáiyát that head the chapters.

The half-dozen Iranians, mostly doctors and their wives, are by no means inscrutable foreigners, however. Just as in The Shadow Knows Johnson was good at portraying true feelings—love and hate rather than condescension—between black and white, so the Iranians come across as very real people, some likeable, some not, acting and inter-reacting with the American group. Exoticism is rather in the feeling of foreignness, the feeling of abroad; Chloe feels “a kind of rapture to see that no matter where you were in the world, you were there, same styles of clouds up above, same ants and pebbles underfoot, and you didn’t feel odd…. How pleasant just to wander along a strange road in a strange land, smiling back at the people sitting in their yards smiling at her.”

If it seems odd that a book ostensibly concerned with menace and oppression—oppression of a people and particularly of Muslim women—should have a certain sunny quality, this surely comes from the character of Chloe herself. Like all Johnson’s “heroines,” Chloe is because of her circumstances—far from her unsatisfactory husband in Berkeley—isolated, out on the edge of things, freewheeling. The phrase “free libido” is quoted in connection with her, as it is with the heroine of The Shadow Knows. But she is no agonizer over the dilemmas of adultery or not dusting the living room—though she sometimes decides she is going to be good.

She usually did just what she wanted. The child of unreproachful parents, she seldom believed that her actions would affect others.

Fortunately, her activities were largely harmless—affairs of the heart, reading, and an array of somewhat Victorian handiworks; she was, as far as she knew, the last woman her age alive in the world who could tat. She did not feel constrained by either rules or fashions—did not feel, for example, on the one hand that it was necessary to be faithful to your husband, or on the other that if you were not you had to get divorced.

Many readers—won’t they?—will sigh with relief that the matter of a thousand “women’s dilemma” novels is gently jettisoned.

If this is postfeminism, it looks good. Chloe is her own woman, unfussed, equally interested in tatting and adultery and antique Persian pots. She certainly thinks it would be nice to be good; but her last thought on leaving Iran is that she will eat both her valuable tins of caviar herself. The epigraph to the book, from Colette, is: “My lately acquired and rather artificial liking for uprootings and travel fits in happily with the peaceful fatalism natural to the bourgeoise that I am.” Chloe is mostly happy, peaceful, fatalistic, natural, and perhaps bourgeois (insofar as Colette was, anyway). And all through the book Fitzgerald’s hedonism chimes delightfully in, rich Victoriana counterpointing modern Iran, telling us that the leaves of life keep falling one by one, that the phantom caravan moves on, a hair divides the false and true, and recommending filling the cup that clears, taking the cash, and letting the credit go. There is a subtheme, of course—the veiled Persian woman, unimaginably imprisoned; she is there, but not propagandized. We do learn a great deal about Iran, but painlessly. In fact one of these women, married off to an old man she dislikes, particularly engages Chloe’s sympathy; but her attempt to set her free fails rather ignominiously. Beautiful Noosheen, it turns out, is no more tortured by her lot than many a Western woman.

Chloe is on the whole delighted to be on her own in Iran, because a handsome doctor with whom she is starting an affair is also to be out there alone. Diane Johnson’s handling of the affair between Chloe and Hugh is faintly comic. In her previous novels, men are rather mysteriously awful; evidently they deserve to be betrayed, deserted by their wives, and so on, but it is not quite clear why, except perhaps that they are boring. (Why no “free libido” among them?) She has not really succeeded in drawing a three-dimensional man; her attitude is rather the patronizing one of Theo in her earlier novel Lying Low:

Don’t you find men touching?… So bravely, so uncomplainingly do they do things—for instance, go to war or sea. Centuries of men going to sea, little boys even—in the nineteenth century. Haven’t you seen those little carvings that the whalers did while off at sea—little wheels for cutting pastry with? I find that very touching. All those months, long cold months away, thinking of pie.

At first it seems that Hugh is just a tiresomely wooden figure, wooden because of his author’s lack of skill. Then it begins to seem that this is more or less deliberate, that Hugh is the equivalent of a dumb blonde or a veiled woman, an exquisitely vapid sex object with whom Chloe takes her pleasure. He is beautiful, he is attentive, he folds his trousers neatly before he gets into bed and puts his shoes side by side. “Manly” is the Victorian word that comes to mind. He has exquisite accessories—“How beautiful, she thinks, Hugh’s cufflinks, his exquisite watch with its alligator band—a Must of Cartier?” His shiny shoes are never dusty—when does he polish them, Chloe wonders—and his chief quality is a “radiant sweetness.” He even pouts and cries a little when he feels Chloe is being too cavalier with him:

“It’s okay for you, you’ll go home as if nothing has happened, you’ll pick up your life. But you haven’t even asked me how I feel. In fact no one ever does ask. You never ask. I’m just useful. I do everything, not that I mind, but it’s I who make reservations, arrangements…” She saw to her surprise that a tear stood in his eye, at his pitiable lot.

“It’s all right for you”; “You never ask me how I feel”; “I have to do everything”: these are surely traditional weepy female complaints. Poor Hugh feels he has been sexually used and then cast aside like an old glove. Poor, poor Hugh.

Diane Johnson is a great tease in another way. As in some of her other books, she spreads clues around in Agatha Christie–like profusion—and they all lead nowhere, or nowhere conclusive. A denouement, we feel, is being led up to. There is (or possibly isn’t) typhoid around, and Chloe keeps eating unwashed salad; isn’t she going to fall fatally ill? Hugh has a mysterious laundry list from somewhere he is not supposed to have been; isn’t he CIA, else why so mysterious? Is Abbas or Mohammed or Farmani in with the secret police? Who is it that comes in and moves things about in the laboratory overnight? And disarranges Chloe’s possessions in her bedroom? Who is the corpse discovered in the cave, and what is going to happen about its disposal? Chloe gives away her passport to Noosheen; won’t she be imprisoned in Iran forever? There’s some sort of an explanation for most of the mysteries, but things blur into an inconclusiveness (like life) with occasional bursts of drama (like life).

I find this the best of Diane Johnson’s novels; it has the unobtrusively good writing, the gripping readability, the tension of the others, but with a broader, more expansive canvas. Like all her novels, it is topical, it is about what is going on in the world; but always in a novelistic way, not “researched” or journalistic. She is a writer of sophistication, and totally innocent of fuss or sentimentality. Always her territory is the outsider’s place, looking in on the insiders with a slightly quirky glance. “It was nicer, Chloe thought, to be outside than in, for if you were inside your walled garden, it would be your garden and you’d have to weed it.” 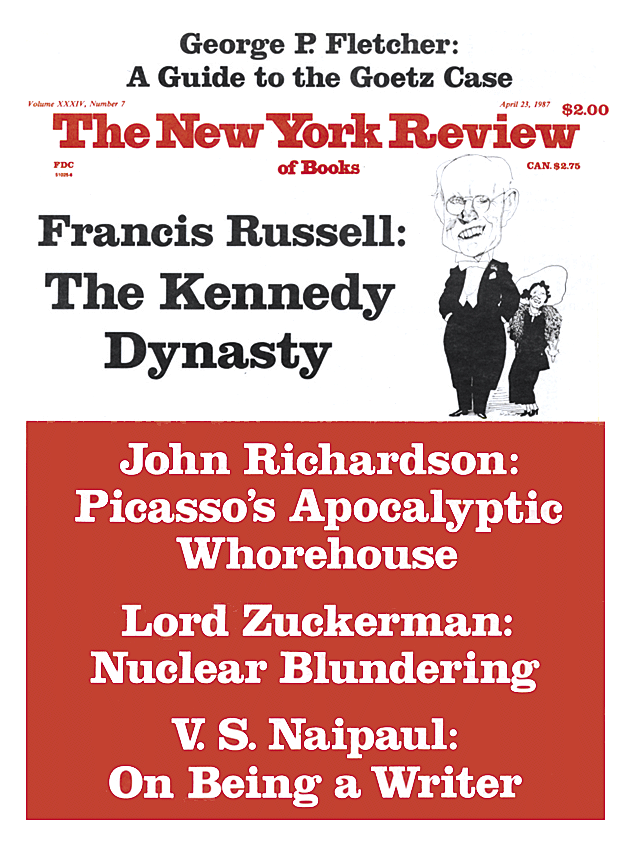 In Love with Verdi

‘The Illness of Ingrained Sorrow’

In Love with Verdi

‘The Illness of Ingrained Sorrow’

Rosemary Dinnage's books include The Ruffian on the Stair, One to One: Experiences of Psychotherapy, and Annie Besant.